By Matt Truex on 22.05.2018  |  Auctions ,  Uncategorized
From the Throne: Highlights from the Warcraft Auction
Share

As king of Stormwind, King Llane is known throughout Azeroth as a thoughtful, selfless leader. But despite his level-headed demeanor, the opulence and excess of royal life is not lost on him or the people of Stormwind, who have created incredible pieces for the King and royal family over the ages. 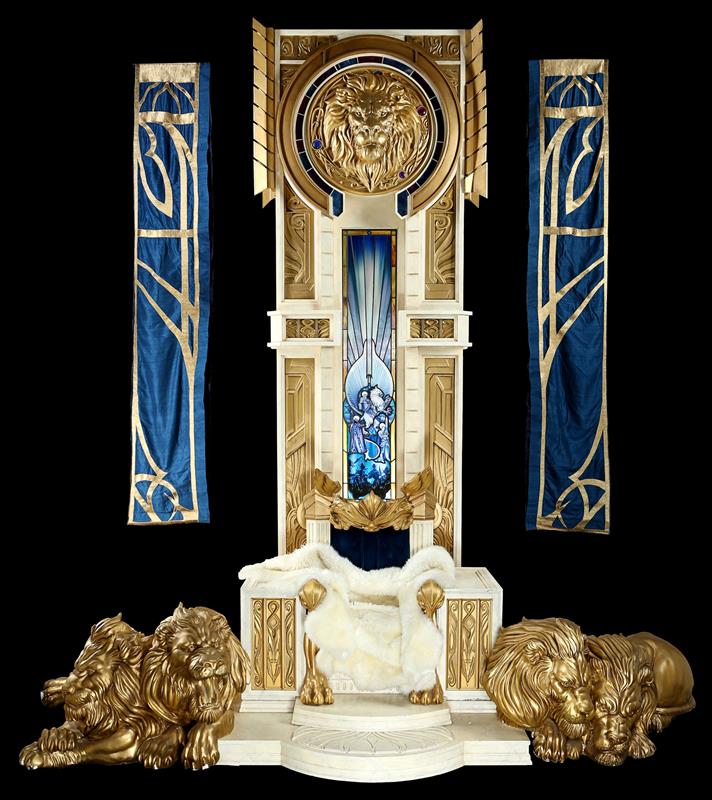 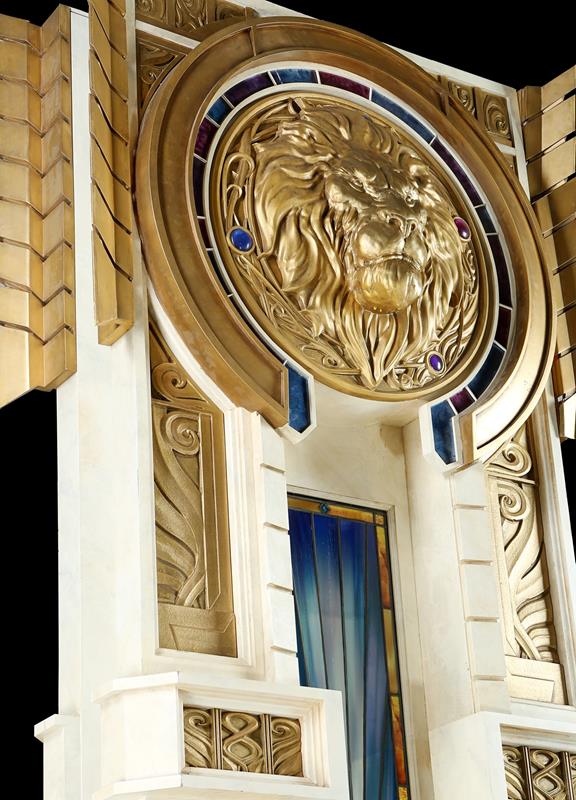 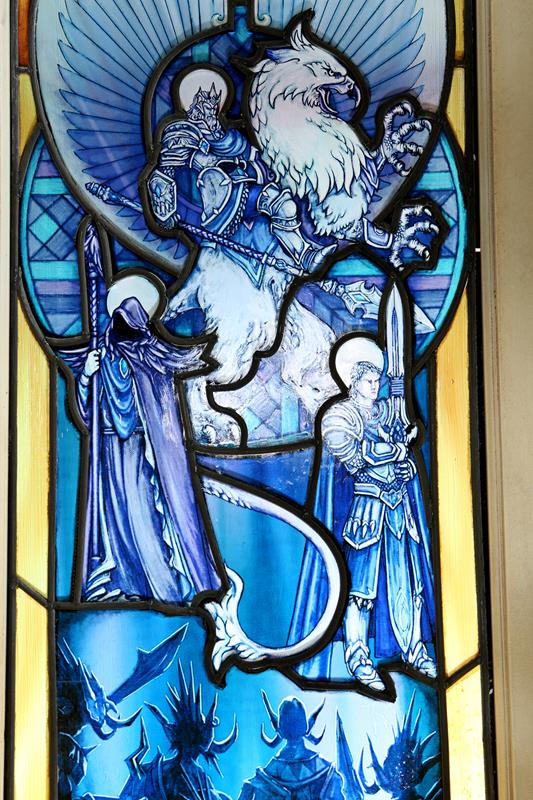 In the great hall of Stormwind Castle, King Llane entertained guests and counselors alike from his lavish throne. Flanked by four sculpted lions, the wooden throne is constructed and painted to mimic marble and gold. Most impressive of all on this lot though, is the headboard. Reaching over 16 feet high, the wood and glass back board depicts a scene of Medivh and the former king of Stormwind, fighting back troll enemies. A sculpted lion’s head sits at the top of the head board, symbolizing the King’s dedication to the Alliance. 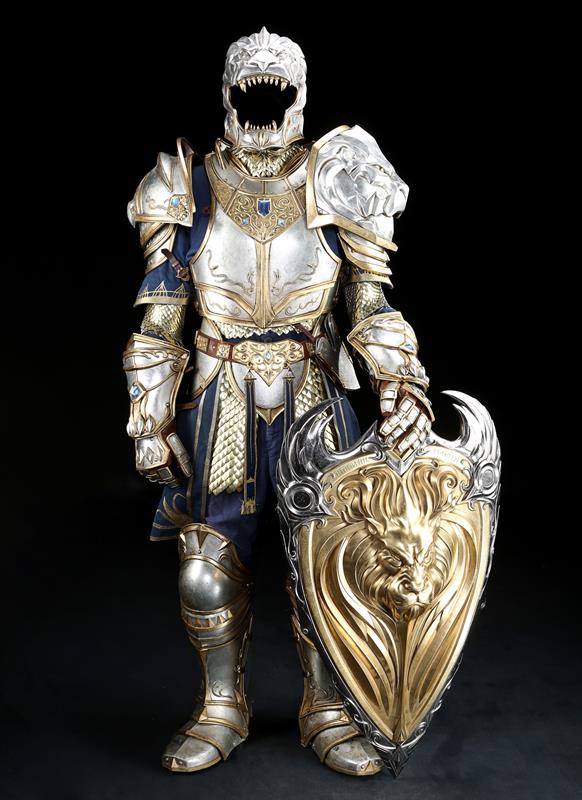 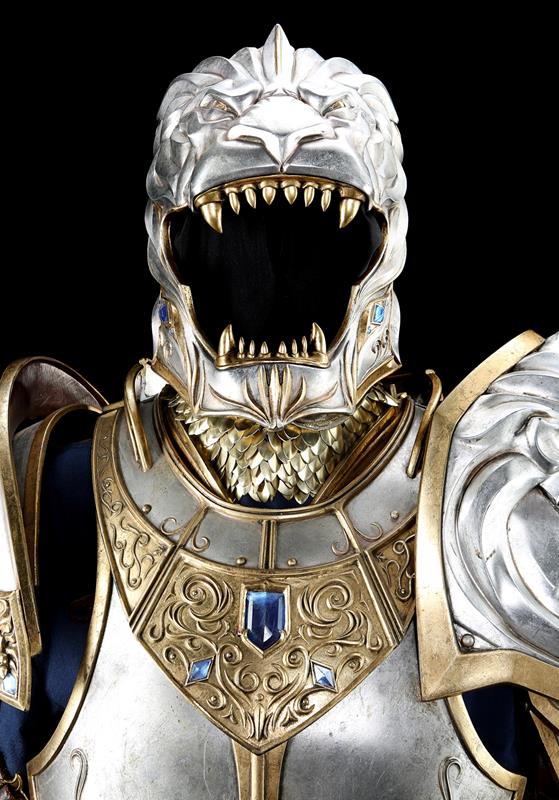 Even with an entire army at his disposal, King Llane still took to the battle field to lead his men against the invading orcs in his custom battle armor. Though similar to Alliance foot soldier and knight armor, the king’s armor is a step above in every way. The silver and gold tones are meant to look polished and buffed, with ornate filigree throughout and gold-toned chainmail. The Alliance lion motif is seen throughout the costume, from the clawed vambraces to the open-mouthed helmet, and even the accompanying shield. 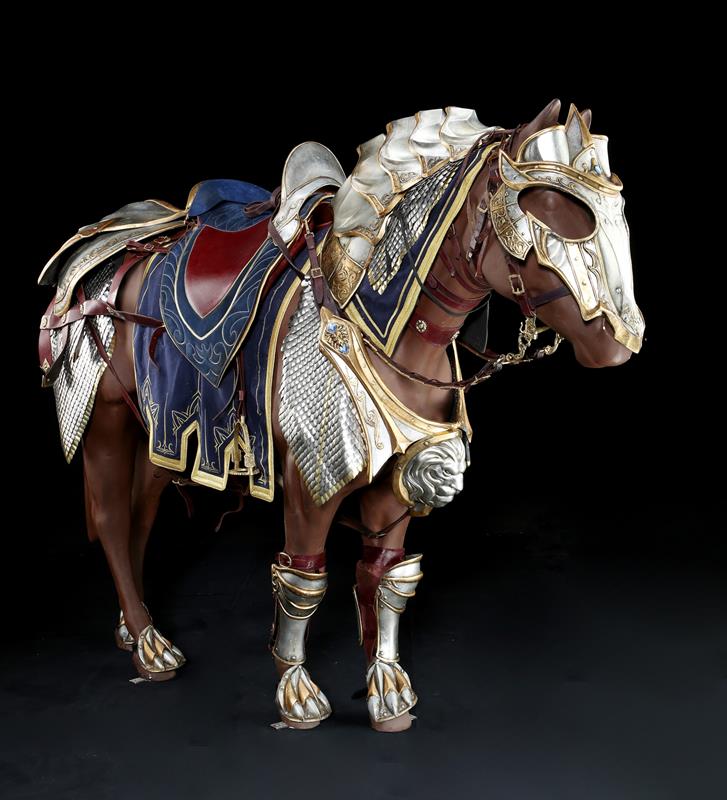 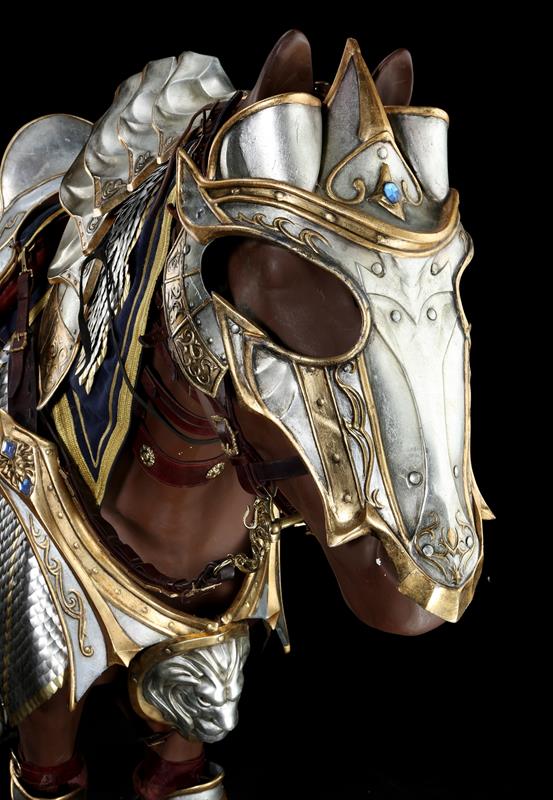 Right in step with the king’s distinctive battle armor was the armor made for his horse. King’s Llane’s royal steed was well-equipped for battle with bright silver and gold-toned armor made to match the king’s colors exactly. Filigree and detail abounds throughout ever piece of this armor, even on the ornate saddle and blanket, and the small blue gems and the Alliance lion match King Llane’s look almost exactly, making his war horse a visual extension of the man himself. The stand-in horse is included with this lot. 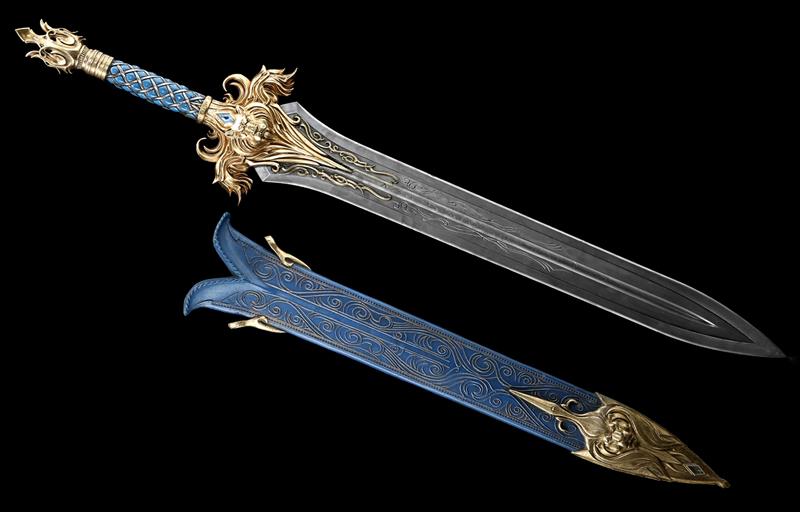 While a boomstick can be fired from afar, a sword is a more direct and personal weapon, and King Llane’s is not to be missed. Designed to match the king’s battle aesthetic, the sword features a polished blade made of pure steel. Most of the piece’s detail, though, remains in the king’s hand, with a blue grip of weaved gold lines, a delicate pummel, and ornate gold-toned grip, featuring the Alliance lion and blue gem accents.

These lots and many more are open for bidding now in Propstore’s WARCRAFT AUCTION Auction, with lots closing Friday, May 4th. Thank you for joining us for our blog coverage and be sure to check out our other articles in our auction series!

Share
Related Articles
17.05.2018  |  Auctions ,  Uncategorized
The Stormwind Armory: Highlights from the Warcraft Auction
When the orcs opened the dark portal to Azeroth and began their invasion, the Alliance army was called upon to face a threat it had never known before. Luckily, the dwarves and armorers of Azeroth were prepared and equipped their forces with the weaponry and armor needed to defend the realm.
28.06.2019  |  Auctions
The REAL World of Warcraft
By Dan Jolin I spent 10 years in Azeroth. The world of Massively Multiplayer Online role-playing game World of Warcraft was immense, compelling, exciting and a great way to spend a long evening — whether that was hitting dungeons with your friends, exploring its lush jungles or barren wastes, or just hanging out down the […]
22.05.2018  |  Auctions ,  Uncategorized
The Horde Arrives: Highlights from the Warcraft Auction
When their homeworld, Draenor, was depleted of resources, Gul’dan, corrupted by the Fel, opened a portal and led an invasion to Azeroth. Looking for a fight, the orcs brought along their strongest warriors and nastiest weaponry. Take a look now at some of the highlights that made it through the Dark Portal.
23.01.2018  |  Auctions
Gods Of Egypt Auction… Walking With Gods
In the world of Gods of Egypt, the pantheon of gods lived among their creations as deities and rulers. Despite their true, almighty forms, the gods take human form among their lesser creations, showing their power and status through clothing and armor rather than wings and claws. Take a look now at some of the […]
Sign up to be in the know