In the world of Gods of Egypt, the pantheon of gods lived among their creations as deities and rulers. Despite their true, almighty forms, the gods take human form among their lesser creations, showing their power and status through clothing and armor rather than wings and claws. Take a look now at some of the most memorable looks from the deities in the Gods of Egypt Auction.

At the start of the film, Horus, the God of Air, is set to be crowned Egypt’s next king during a gigantic coronation ceremony. Horus dressed in his moral-best for the occasion, having shed his true form for armor befitting a king. This costume’s design plays into the “God of Air” motif, featuring chainmail meant to mimic feathers and bird ornaments throughout (including two detached falcon patches).

Never one to play nice with others, Set seized the throne from his nephew, Horus, and ruled Egypt with an iron fist. With this lot, Set’s aggressive ornamental armor reflects his unbridled cruelty, setting him apart from the gleaming, gilded gods in the pantheon. The armor evokes danger, with monstrous ribs, scaled leather, and unearthly design elements throughout. A scale-textured cape completes the villain’s look. 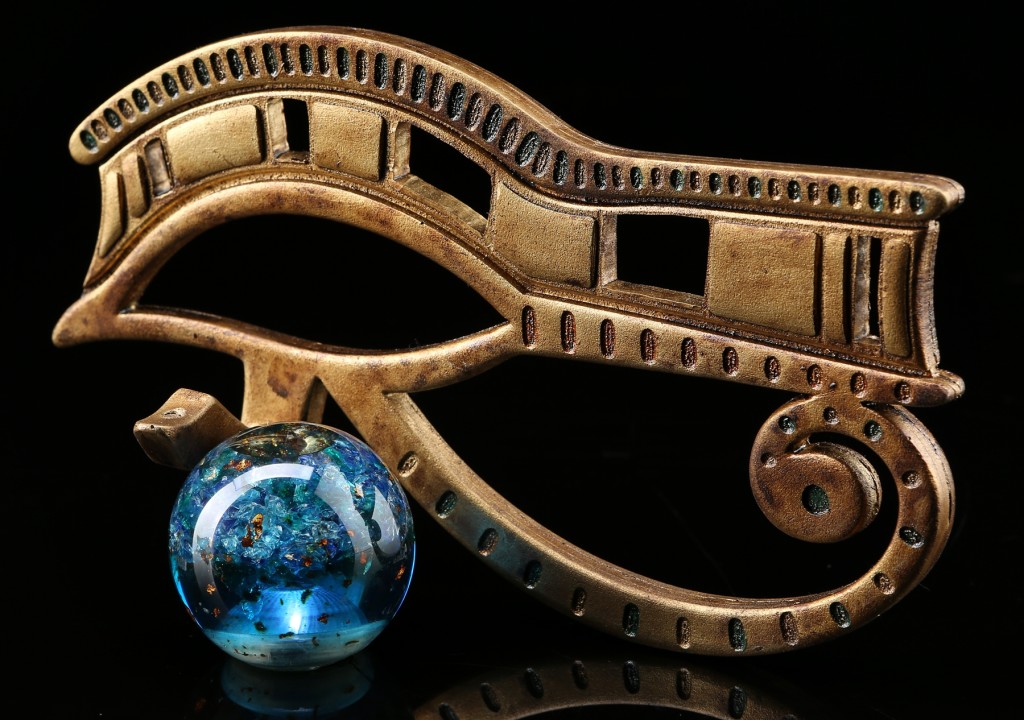 The source of a god’s power is their most precious possession. For Horus, his almighty powers reside in his eyes, which Set happily took from him when he seized the throne. He then separated the eyes, keeping one on a mount in his underground treasure room. The acrylic eye features a small internal battery and bulb which is activated by a hidden button. The accompanying mount is made of resin and closely matches the ancient Egyptian symbol of protection.

If knowledge is power, then Thoth, the God of Wisdom, is a force to be reckoned with. While many gods dress to emphasize their strength, Thoth’s ornate headdress communicates to the world that what he prizes most rests in his mind.  The headdress is paired with matching cuffs that were created for use by a photo double or stunt performer. 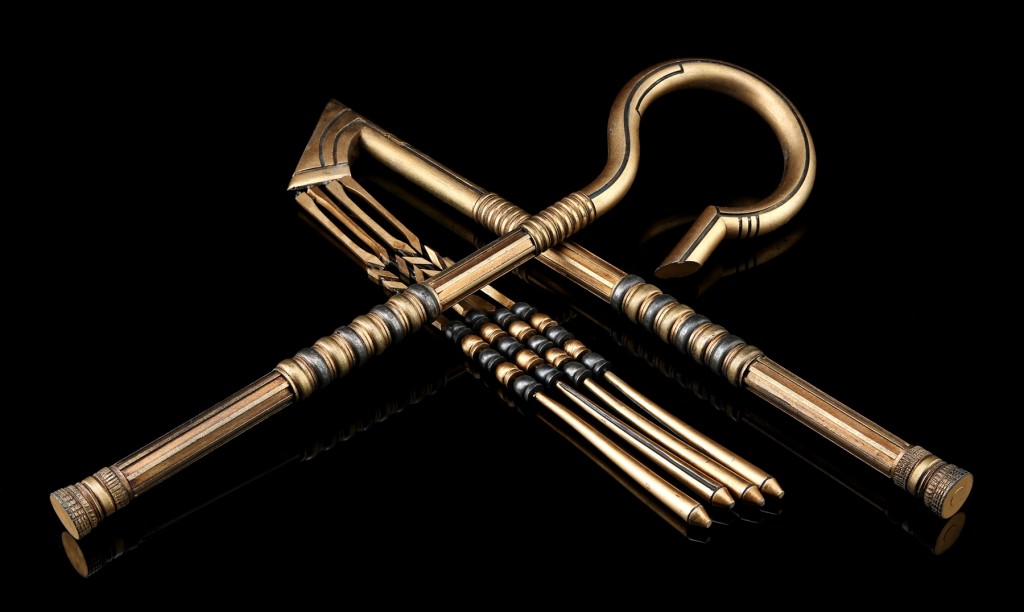 A crook and flail are almost as iconic to ancient Egypt as pyramids, sarcophagi, and mummies. Though not seen in the final cut of the film, these props were created for the King of Egypt himself and are great representations of the film’s melding of mythology, fantasy, and futurism. The traditional shape is elaborated on with futuristic, geometric designs that visually represents the other-worldliness of the gods in the film.

Share
Related Articles
16.01.2018  |  Auctions
Gods Of Egypt Auction… Women Of The Nile
Unlike the armored militarism of many of the male gods, the female deities of Gods of Egypt show their power more subtly, incorporating symbols of their might into the fine dresses, crowns, and other ornamental pieces they wear. Naturally, this makes many of the goddess costumes some of the most visually arresting lots in the […]
10.01.2018  |  Auctions
Gods Of Egypt Auction… Defending Egypt
When gods walk among their followers, danger follows close behind. Despite their almighty powers, the deities in Gods of Egypt feud like any royal family in an effort to rule Egypt as they see fit. Take a look now at some of the stand-out armor, prop weapons, and more from the Gods of Egypt Auction and […]
22.05.2018  |  Auctions ,  Uncategorized
From the Throne: Highlights from the Warcraft Auction
As king of Stormwind, King Llane is known throughout Azeroth as a thoughtful, selfless leader. But despite his level-headed demeanor, the opulence and excess of royal life is not lost on him or the people of Stormwind, who have created incredible pieces for the King and royal family over the ages.
16.07.2018  |  Auctions ,  Uncategorized
IT’S MORPHIN TIME: Highlights from the Power Rangers Auction
It has been said there are evils in the universe darker and more powerful than you could possibly imagine. As you read this, witches, monsters, and sorcerers across the universe plot to conquer our planet and destroy life on Earth as we know it. Thankfully, there are five teenagers, with more than a little attitude, […]
Sign up to be in the know