The Making Of The Monster Maker Auction

In his own words, Prop Store LA COO Brandon Alinger’s talks about the once in a lifetime experience that working with Baker to develop this auction has provided…

I met Rick Baker about six years ago, when he invited Prop Store to his legendary Cinovation studio in Glendale, CA to look through his basement. Rick took us through the shop and we were all blown away at the scale of it – a seemingly endless series of offices, make-up rooms and work areas. Stephen Lane, Tim Lawes and I were blown away by the volume and the quantity of the material. Rick turned us loose in the basement for several hours and we gathered together a collection of material—this would be our first offering of Rick Baker pieces, which were sold through Prop Store in 2009 and 2010. Rick thanked us for “helping clean out his basement”—which was one way of looking at it! 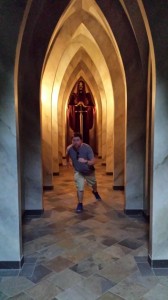 A hallway in the amazing Cinovation Studio building

A panoramic view of one side of the Cinovation showroom

Fast forward to 2014 and I found myself touring Cinovation once again. Cinovation was not just a creature and make-up effects shop, it was a work of art in itself—Rick went to great lengths to theme out the entire upper level of the shop in a Wizard of Oz motif, complete with custom hallways, monkey gargoyles, oversized gothic doors, and the most impressive office you’ve ever seen. Rick had made the decision to sell the building—having made monsters for more than 40-years, he no longer felt the need to maintain a massive effects facility. The Glendale Cinovation shop was put together in the mid-90s, for projects like the Men in Black films, Planet of the Apes, and How the Grinch Stole Christmas. These were all big, big make-up shows, requiring hundreds of performers to be made up on a daily basis. Rick said he was more interested these days in doing design work and personal art projects than in making up armies of actors, and therefore maintaining the shop was no longer necessary. He was downsizing to a much smaller studio, and that meant he would no longer have room for the hundreds of boxes he had been collecting and storing for decades.

Rick planned to retain many of his favourite creations, but he felt strongly that he would also like to share the items with fans. Being a massive film fan himself, he knew passionate fans would love to own a piece of the work and would help preserve the material for the future. We hatched a plan for the Rick Baker: Monster Maker auction, and went to work on what we all felt was an unprecedented auction. 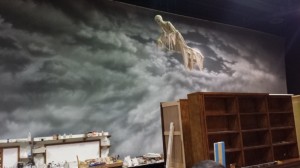 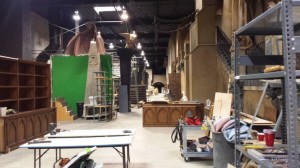 The Cinovation studio during the strike period

It quickly became clear that sorting and removing the material from Cinovation would be a major job in itself. We spent weeks working alongside Rick and the small team who was helping him move out of the building (including effects artists Arjen Tuiten and Danny Wagner). We would arrive each morning and walk through a different area of the 60,000 square foot building. “Yes, we can auction that,” or “no, that’s going home with me,” Rick would say as we looked through storage boxes that hadn’t been touched in years. This is where we really have our fun—the treasure hunting phase. Each day we would pull out new treasure . My favourite area of the shop was the sea of flight crates in a locked-off cage in the basement. We knew that it if it was worth protecting with a nice flight case, it was probably a great piece. Here we found things like the “smile head” from Harry and the Hendersons”, and the radio controlled heads from Mighty Joe Young. Having been stored away from light and the elements, the condition on many of these pieces was flawless. 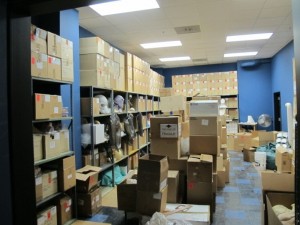 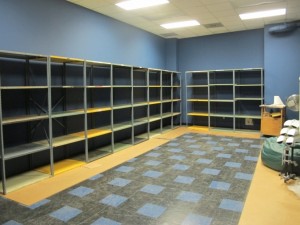 Hundreds of boxes had to be cleared away – many carried by hand down two large sets of stairs!

The content of the auction was ever-evolving. Rick had a massive showroom full of trophy pieces that was everyone’s favourite area of the shop. He planned to take many of these home, but space limitations meant that a few pieces—including the Mikey alien costume, our cover piece—were re-routed to the auction. In addition to his favourite creations, Rick retained many of the original molds for the most notable characters. Molds are tough to manage, to say the least. They are heavy, bulky things…one large plaster mold in the shop was labelled I Dare You To Pick Me Up! For this reason Rick could only hold onto a selection of them, and several dumpsters worth of molds had to be discarded. 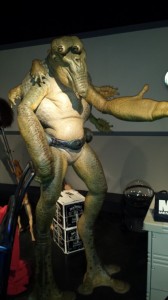 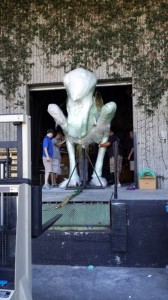 The Mikey costume display—the cover piece of the Monster Maker auction—set up in Rick’s show room; removing the oversized Edgar bug from the shop was certainly an experience. 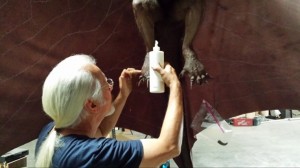 As much fun as it was browsing puppets and make-up pieces each day, even more enjoyable was spending time with Rick Baker. We had quite a few lunches with Rick over the period working in his shop, and each meal would bring a new lesson on the history of the make-up effects industry. For a film fan like myself, this was an amazing experience and education. I hope Rick does a book on his  career at some point, as he has some fantastic stories (and a few that may not be suitable for print!) 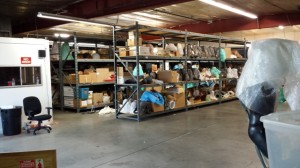 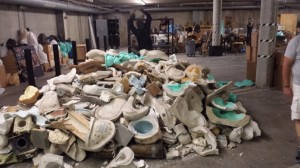 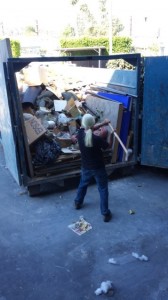 Rick smash! Many molds were destroyed as the shop was struck—though Rick did retain those for the most historic characters

Time has passed quickly preparing this sale, and it’s hard to believe we’ve been working on it for nearly a year now. The auction is fast approaching and I’m excited to see which items attract the most attention, and to chat with the fans who win the pieces they’re after and become their new custodians. This is one of the largest projects we’ve ever tackled at Prop Store, and it was a huge amount of fun. See you at the auction!

Next post
Back To The Future: The Restoration of the 2015 Hill Valley Police Cruiser