Jim McPherson is currently a 3D artist with 3DSystems/ Gentle Giant Studios. He is proud to have worked on some selected items from the the Rick Baker Prop Store auction and has shared with us some great stories about his time with the Monster Maker himself… 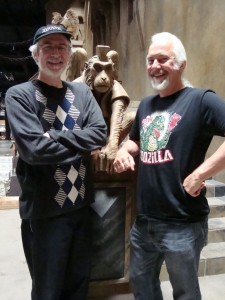 I always wanted to work for Rick Baker. That’s not exactly true, but I’ll get back to that later. The first time I learned about him was from reading Famous Monsters #105 in 1974. It featured the familiar sounding “Rick Baker… Monster Maker” article, By Saul Kahan. For years, I had been watching Universal horror pictures with classic Monster Makeup by Jack Pierce. This led me to buy Famous Monsters magazine, which included an ad for the “Monster Makeup Handbook” by Dick Smith. The hodge podge of Famous Monsters issues I managed to scrounge up sometimes included “how to” articles by Dick Smith. The late Mr. Smith was doing amazing work, always thinking about doing thingsdifferently than most of his contemporaries. That guy could really sculpt, paint, and glue! He wrote one time, “First, make a horrible eye, then throw that one away, and make a better one.”

Rick was 22 years old when he helped out on “the Exorcist” and traveled to Iraq with Dick Smith…This seemed pretty interesting to me. I looked at the pictures in Famous Monsters #105 – including one of Rick with the Geoffrey Holder head from “Live and Let Die”. I wondered how his work could ALL be this great? One of the titles in Famous Monsters described Rick’s work as ( Lon) “Chaney Quality.” What magic tools did he use? What was his philosophy? What was he thinking about while holding that sponge? What sandwich did he eat, and why? The answers were not provided in the articles I read. There was nothing written about what Rick ate that made his work so good.

When I first started working for Rick on Gremlins 2, he didn’t talk very much. He had about a hundred and twenty employees – give or take- and he didn’t have much time. If you were lucky, you MIGHT see him for one minute a day. To be more efficient, I learned to write down whatever questions I had prior to meeting with him. He gave us script pages with descriptions of the Gremlin characters. We were told that it was our job not be literal but to be creative and to add as much character as we could. I came up with some unusual ideas. Rick seemed to like what I was doing, so I started coming up with as many variations of characters as possible. Rick would look at my work and say, “Well, I’m thinking someone else will be doing that Gremlin, but you can do some more.” He seemed to like the George Gremlin maquette I did, so he told me to make the Mogwai version so that “we can see if it works”. He then said, “ I guess you can try sculpting his head.” I realized then that I’d better do this job better than anything I had ever done before. Rick said “I like that.” He seemed surprised. So I kept going. I had been watching Tom Hester, Steve Wang, Matt Rose, and Norman Cabrera do their own work. This provided me with a pretty good speed-learning sculpting course (There was no internet at the time). I finished much of the remaining George sculpt, and ended up bringing him to the set for most of the shots. 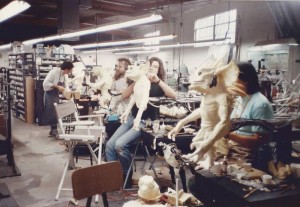 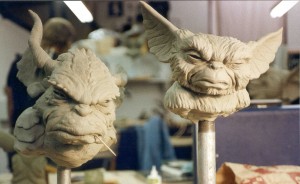 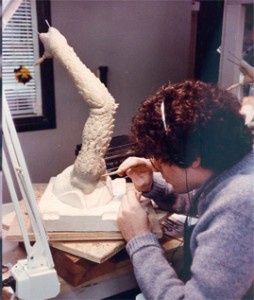 Some years later I worked on the remake of “The Nutty Professor.” Rick asked me to come up with some ‘wild ideas’ for the transformation sequences. He said to me, “Don’t edit yourself. Just think of everything you can, draw it, and think of something even stranger. We can always scale it back. We need to shoot for things that have never been imagined before.” After drawing characters, I sculpted a whole bunch of these extreme transformation maquettes and Rick had me sit with him at his computer. He had his own custom-made server in this little room. He showed me how to use the program, and told me, “You’re going to make an animated film in the computer to show me what this could become.” Who, me? He liked to sit in this room at lunchtime, so I also inherited the job of getting us both sandwiches. This answered my question about what Rick ate. Back then, Rick always ate the same sandwich. When the sandwich maker saw me coming, he would just start making Rick’s sandwich. Someone once asked Rick why he ate the same thing every day. He answered something like, “ I don’t want to spend any time thinking about lunch. Lunch is dealt with. I want to direct ALL of my energy thinking about creative things.” I also started eating the same thing to save even more time. 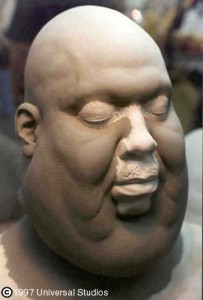 Does this sort of seem like Albert Einstein always wearing the same suit? To not have to think about it? (I don’t think Rick wore the same outfit every day. He had lots and lots of movie crew shirts for some reason, and his wife buys him stuff for when he needs to dress up. ) He really, REALLY, likes to concentrate on what he’s doing.

After having the privilege of working on several movies for Rick, I’ve heard him say many interesting things about his thought process. His philosophy is simple: Be the best Makeup/ Creature / Character/ Visual FX designer on a film. His quest is to do excellent work. He clearly has accomplished this. In the future, I hope we’ll all be able to own a series of Rick Baker Studio “Making of Art Books”. This series will include his autobiography and philosophy- in his own words. I’ve seen a room full of archived photos from his entire career. Now that would be a book project I’d like to buy. I imagine that if you’re reading this blog, or you bought the Rick Baker Monstermaker Auction catalog, you would too.

If you don’t manage to buy all the props you want from the auctions, maybe you can invest some of your spare millions – or maybe a little less- into printing a Rick Baker book. To get back to my first point, the truth is that I really admired Rick’s work while looking through those magazines long ago. I could only hope to work for him. And finally, it actually happened. I worked for Rick and ordered the same sandwich every day. 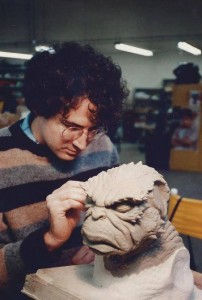 Next post
You’ll Go Batty for Our Original Batman Props!