In conjunction with the release of the Rick Baker: Monster Maker Auction catalog, Prop Store is excited to take a deeper dive into the incredible material that comprises this historic auction in the form of a ten-part blog series.

The auction now stands mere weeks away, but it has been nearly a year in the making and one of the greatest excitements for Prop Store and its staff while developing the Rick Baker auction was the unparalleled access we were granted to the famed Cinovation Studios. While the vast majority of the material included in this unprecedented auction will be instantly recognizable by even the most novice of film fans, some of the more obscure Baker creations took center stage at Cinovation.

In our first blog post documenting the material in the Rick Baker: Monster Maker auction, we will be taking a closer look at some of Cinovation Studios original material. 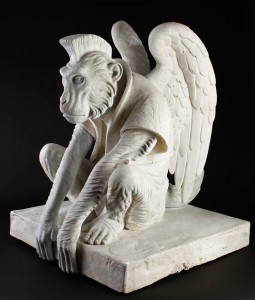 The main floor of Cinovation Studios was decorated in a Wizard of Oz motif. Given this decorative theme and Baker’s groundbreaking work on various primates for films such as Greystoke, Gorillas in the Mist, Mighty Joe Young and Planet of the Apes, it should come as no surprise that flying monkeys like this one adorned the studio’s primary staircase. Though never used in an on-screen production, the winner of this Cinovation Studios original piece will be the proud owner of a Rick Baker design with an undeniable link to cinematic history. 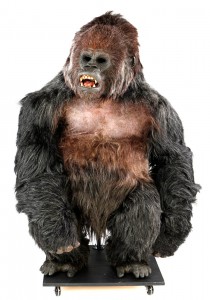 Did we mention that Baker was renowned for his monkeys? With a CV like that, you always need a full gorilla costume around and this Cinovation ‘Shop Gorilla’ was just the ancestor of man for the job. This gorilla was available for rental on commercials and similar smaller scale projects and was also used by Cinovation to demonstrate their prowess when bidding for larger jobs. Built into a full costume display by Tom Spina Designs, this signature Cinovation original will be under the hammer on May 29th. 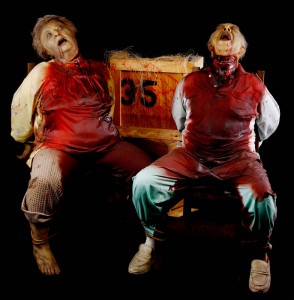 We’ll let the apes and gorillas take a backseat for this one as we turn to one of Baker’s other fortes, blood and gore! This unfortunate duo appeared in the Sean Connery and Ed Harris thriller Just Cause as the murdered parents of Blair Sullivan (Harris). Unlike the couple they portrayed on the silver screen, these two did not meet their end in the film as they were repurposed by Baker to be one of the centerpieces in Cinovation’s in-shop house of horrors. If these gruesome corpses were good enough to feature in a blockbuster and the Mosnter Maker’s own fun house, we figure they’ll be too much for any true horror fan to pass on. 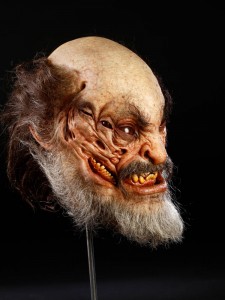 This demonic piece was featured in The Devil’s Advocate before taking its place alongside the gruesome couple in Baker’s fun-house. The elaborate detail of the piece is surpassed only by the imagination that went into the numerous eyes, teeth and textures that dot this demon’s face. Guess that’s how you get the name Monster Maker. 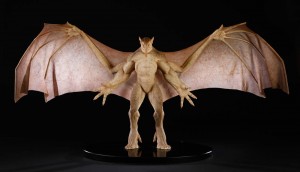 This stunning piece was created by Cinovation as a concept for what the live action Gargoyles would have looked like if the production was not abandoned. Although this piece was never brought to fruition in the form of a full-size Baker creature, it doesn’t take an avid fan of the animated series to realize that Baker would have delivered when you observe the detail of this beautiful sculpture. This piece is sure to fly off the auction block when the Rick Baker: Monster Maker auction takes place on May 29th at the Hilton Universal City in Los Angeles.

For a look at more incredible pieces direct from Baker’s Cinovation Studios, check out our interactive catalog and the video trailer for the auction.

Next post
Just Add Water! A Closer Look at Mogwai and Gremlins