While Hannibal Lecter’s deadly exploits are certainly a major focus of the series, the women surrounding the good doctor are well-deserving of his respect, affections, and unsavoury appetites. Take a look at some of the key costume components worn by the leading ladies of Hannibal. 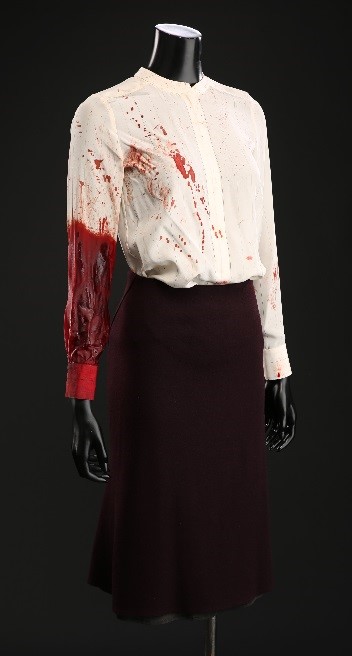 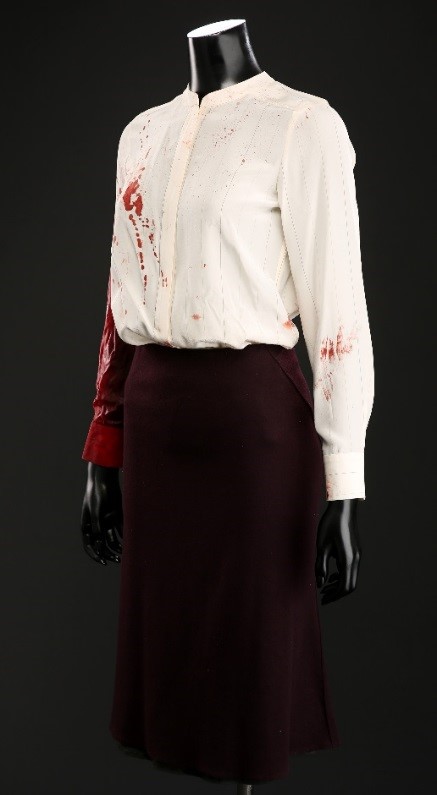 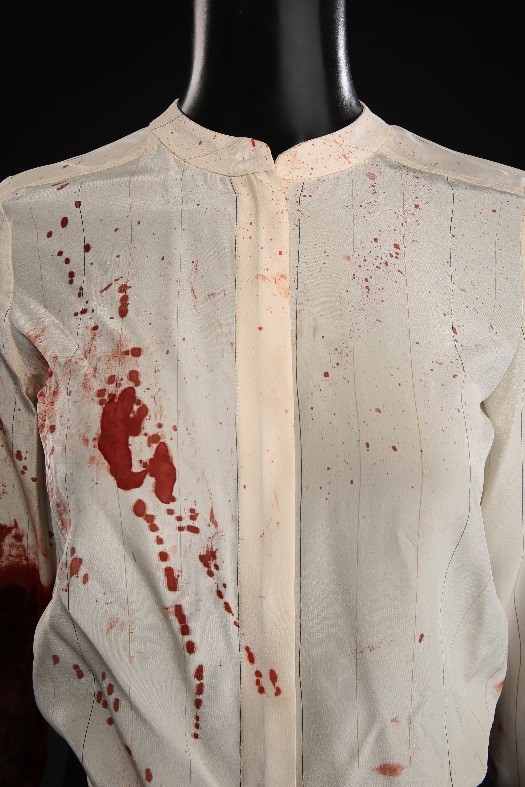 It takes a very special character to be Hannibal Lecter’s psychiatrist, and Dr. Bedelia Du Maurier (Gillian Anderson) is certainly up to the task. From friend and colleague, to conspirator and victim, Bedelia plays many roles throughout the series, including that of psychiatrist to Neal Frank (Zachary Quinto). When the patient attacks her, Bedelia forces her arm down his throat, claiming her first victim. This costume was created for use in episode 301, “Antipasto,” and is seen in flashback in several episodes. The Linda Baday shirt is heavily stained with stage blood to emphasize Bedelia’s momentary brutality. 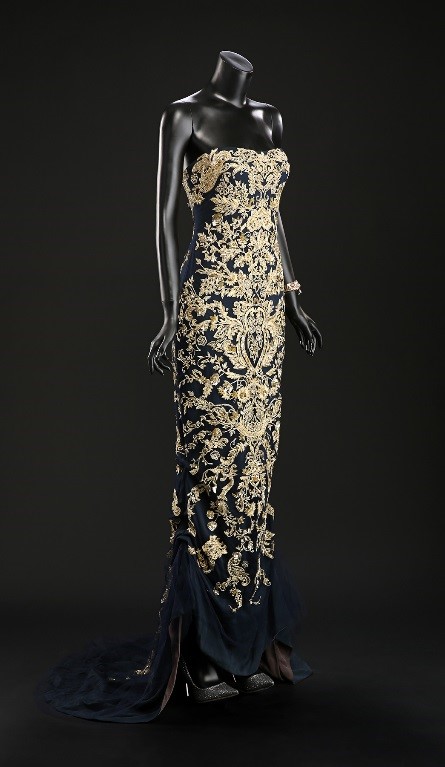 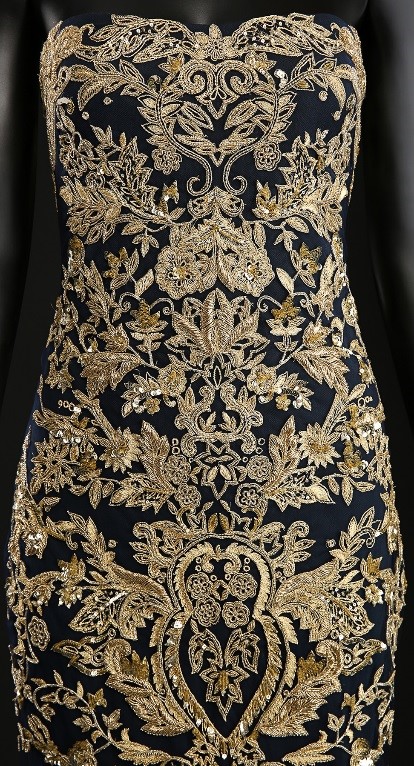 Of course, blood-stained blouses are not usual attire for Bedelia. In fact, she is often the height of fashion and sophistication when on the lamb with Lecter in the third season. This dress, also from “Antipasto,” was worn by Bedelia when attending a lavish party with Hannibal and is also featured in the season’s promotional photos. The gorgeous Marchesa dress is accompanied with a faux crystal bracelet and Jimmy Choo pumps. 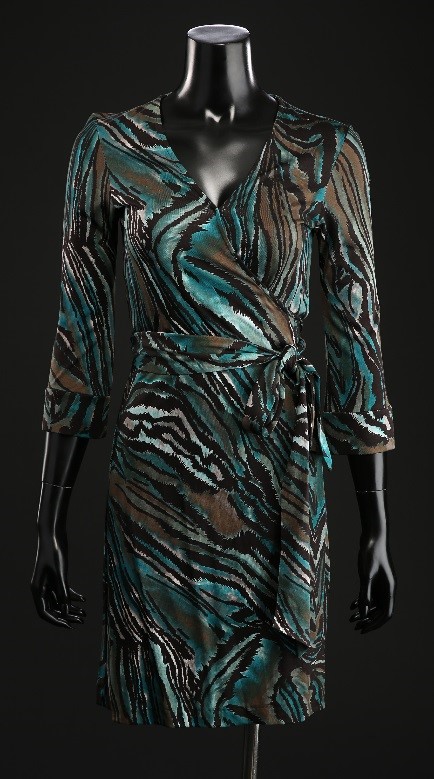 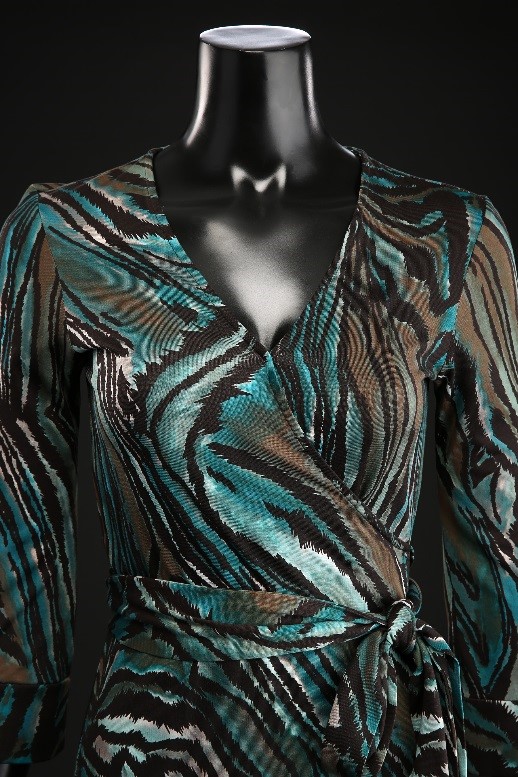 As one of the series’ only mental health professionals without blood on her hands, Alana Bloom (Caroline Dhavernas) is one of the FBI’s most trusted profilers. Regularly dressing in patterned wrap dresses, this lot from episode 111 “Roti” typifies Alana’s professional appearance. The silk dress boasts a turquoise, grey, and brown pattern throughout and is labeled for the character.

In a series full of unfortunate fates, Miriam Lass’s (Anna Chlumsky) story is one of the most tragic. After being presumed dead by the FBI for years, Lass is miraculously found at the bottom of a pit wearing this dirty nightgown. The BCBG Maxazria brand gown was purposefully dirtied and stained by production, giving the appearance that Lass had been wearing the garment for much of her captivity. 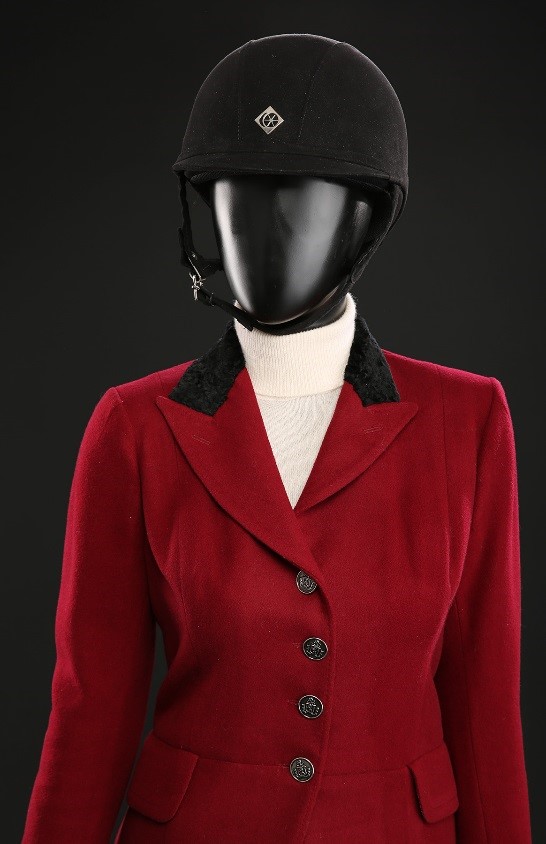 One part of the deadly Verger siblings, Margot Verger (Katharine Isabelle) is a force to be reckoned with in her equestrian outfit from episode 210 “Naka-choko.” The lot consists of not only a full costume, but a suede riding helmet and black leather crop as well.

Share
Related Articles
29.04.2020  |  Uncategorized
Wes Anderson’s Top 5 Films
In our latest blog series, we’re taking a look at our chosen top 5 films of some our favourite Directors in the business.
11.03.2016  |  Auctions
Killer Wardrobe: The Sophisticated Style of Hannibal Lecter
With over 1200 lots in our upcoming Hannibal: The Complete Series Auction, it is incredibly hard to narrow down the standout pieces. But even compared to the rest of the cast, the show’s title character shows an impeccable mastery of style in any situation.
16.03.2016  |  Auctions
The Art of the Kill: The Art Department’s Contributions to Hannibal
While Propstore regularly deals with breath-taking props and artwork created for the screen, the consistency of the work produced by the Hannibal art and prop department is among the very best work we have encountered. Take a look at some of the incredible contributions made to the show by the talented artists and craftsman behind […]
16.06.2015  |  Auctions
Exclusive Hannibal Prop and Costume Auction: Savor the Hunt!
We are delighted to announce our exclusive online auction of original costumes and props from NBC’s critically acclaimed television show – Hannibal.
Sign up to be in the know