Marvel’s Agents of S.H.I.E.L.D. is the ultimate convergence point of a shared universe. One which features characters, plots and items completely of its own creation, but one which also includes many references to both the 80 years of Marvel Comics history as well as over a decade of films in the Marvel Cinematic Universe. 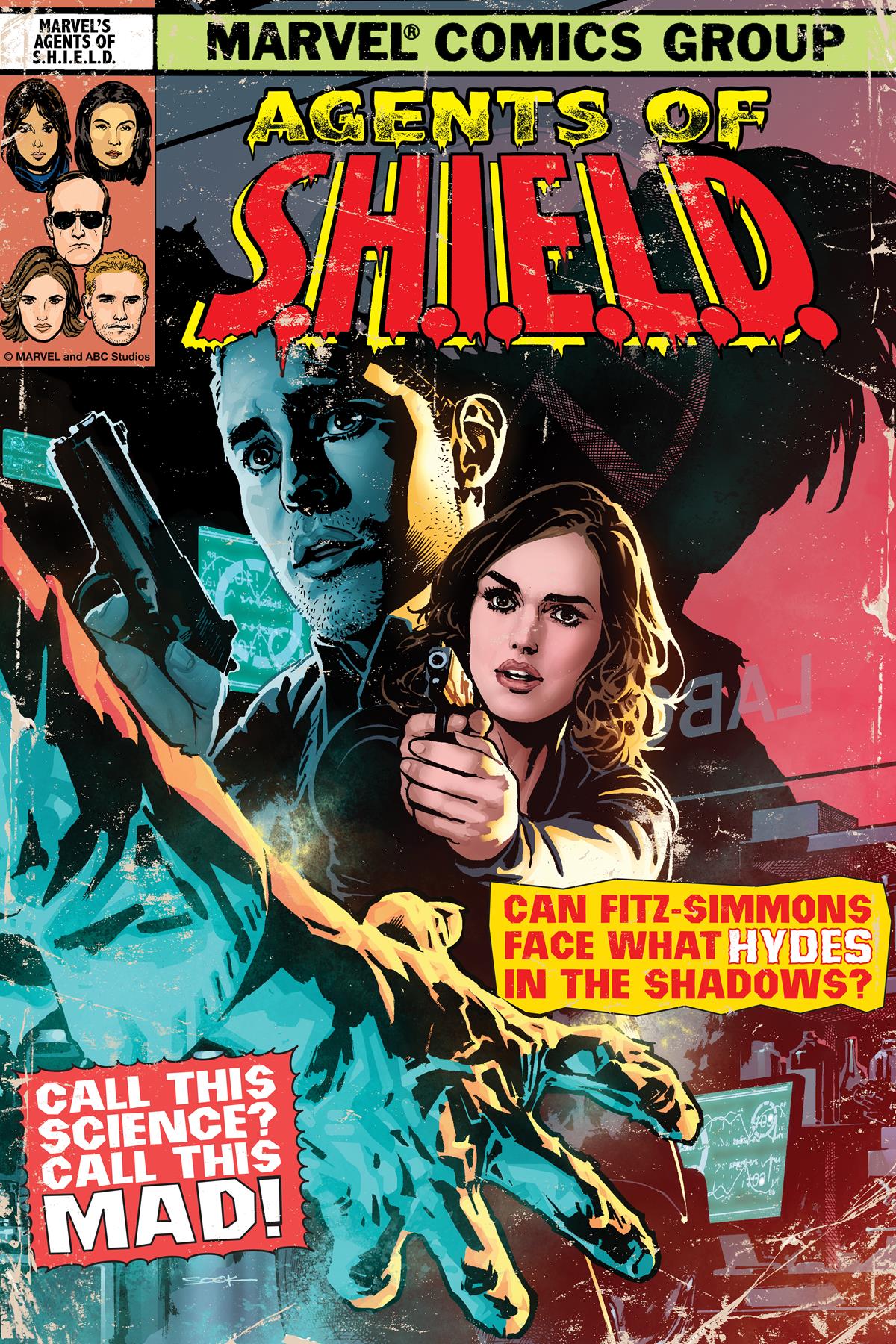 Since the moment the intelligence agency known as S.H.I.E.L.D. first appeared in Marvel Comics in the pages of Strange Tales #135 (August 1965), it already felt as though it was steeped in a complex history. The main reason for this is also the most obvious: Nick Fury. Having already been depicted for several years in the pages of the World War II comic “Sgt. Fury and His Howling Commandos”, this book modernized and reinvented the gruff soldier as the newly-minted Director of the super-spy organization. Sporting a weathered new look and mysterious eyepatch, Fury led a team of agents who were equipped with weapons and gadgets partially supplied by another face familiar to Marvel readers: Tony Stark. Placed in charge of the “Special Weaponry” division, Stark made sure to provide the tools of the super spy trade with all the flair befitting the character.

Starting with the flying car.

The Low-Orbit Liftoff Automobile, or L.O.L.A., as seen in the series is similar to the hovercar designed by Stark Industries in Marvel Comics,  featuring a dashboard full of light-up switches which allowed agents to control the vehicle. Decades later one of these cars became Phil Coulson’s preferred mode of transportation in Marvel’s Agents of .S.H.I.E.L.D., earning it a permanent parking space in the back of “The Bus”, his team’s mobile command station.

While the sleek design of L.O.L.A. made her the envy of all readers, in some situations a group like S.H.I.E.L.D. needs function as well as form. Because of this, agents in the comics were almost always seen wearing classic blue jumpsuits with ranking stripes and a S.H.I.E.L.D. insignia on one arm. These jumpsuits are featured on the show’s seventh season, when Coulson’s team travels back to the 1970s to meet their historical counterparts. Back in the modern era, these costumes have been updated with a modernized, tactical look worn by agents such as Melinda May and Mike Peterson.

As for the fashion of Fury himself, being Director has its privileges. Dressing in the all black wardrobe seen in his “Ultimate Universe” comic incarnation, he is at home both behind the wheel of a Helicarrier and as the stealth lone operative he becomes when turning S.H.I.E.L.D. over to Phil Coulson at the end of Season 1. One of Fury’s most iconic weapons from his early comic appearances, a NF-300 Needle Gun, capable of incapacitating targets from a great distance, is visible behind Coulson’s desk after he assumes directorship. This gun is the clear inspiration for Leo Fitz’s slew of non-lethal field weapons deployed throughout the show including the “Night-Night” rifle and pistols as well as the more advanced “I.C.E.R.” guns from later seasons. And even items used by other S.H.I.E.L.D. agents, such as Bobbi “Mockingbird” Morse’s signature battle batons, are direct references to the characters’ Marvel Comics counterparts.

All of this gear and weaponry look cool, but in the face of threats such as the ones S.H.I.E.L.D. faces on a regular basis, they are essential.

One of the Marvel Comics villains whose history stretches back even farther than S.H.I.E.L.D. is Carl Creel, a criminal who goes by the name “Absorbing Man” and can mimic any element he touches. For his debut episode on the series, he swings a metal chain with a ball attached to it, a reference to the wrecking ball he uses as his primary weapon in the comics. Other classic villains from the comics appear on the show and are invariably linked to their Marvel Comics iterations through their costuming or weaponry. When Angar the Screamer, a man with superpowered vocal chords, first appears, he is a prisoner in a metal mask which prevents him from using his power. Similarly, when Coulson’s team joins Asgardian warrior Lady Sif in an attempt to capture fugitive Lorelei, an enchanted necklace must be used to keep her from employing her magical vocal powers. This encounter with otherworldly beings was the first of its kind for Phil Coulson’s team, but it certainly wouldn’t be the last.

In Season 5, the team are transported to a futuristic space station run by members of the Kree, an alien race which were first discovered by the Fantastic Four in the comics. These aliens wear unique jackets and boots and carry an array of weapons which feature prominently in Marvel Studios films or Marvel Cinematic Universe such as “Marvel Studios’ Guardians the Galaxy” and “Marvel Studios’ Captain Marvel.”

Once they’ve returned to Earth, the team face their greatest threat yet. When their former government liaison, General Glenn Talbot, is exposed to an unstable element called gravitonium, he transforms into Graviton, a villain best known in the comics for single-handedly taking on The Avengers. Wearing a costume heavily influenced by the one he dons in the pages of Marvel Comics, his attempt to place the planet under his complete control is thwarted by S.H.I.E.L.D. agent Daisy Johnson, aka Quake, an Inhuman member of Coulson’s team who wears a supersuit with power gauntlets that help regulate the immense seismic power she possesses.

The references to Marvel Comics and their cinematic counterparts are plentiful throughout all seven seasons of Marvel’s Agents of S.H.I.E.L.D. When a character like Agent Peggy Carter, a hero from “Marvel Studios’ Captain America: The First Avenger” and the Agent Carter TV series, as well as founding member of S.H.I.E.L.D. passes away, her obituary carries as much pain for Phil Coulson as it does for Steve Rogers himself in “Marvel Studios’ Captain America: Civil War.”  When the Darkhold, a cursed book of spells which once was featured in its own comic series, disappears from S.H.I.E.L.D., it reappears in Season 3 of “Marvel’s Runaways”. Throughout its history on the page, on the screen, and on your TV, S.H.I.E.L.D. has become known to fans across all platforms as a force which is both indispensable and uniquely enjoyable, with many Easter Eggs to hunt for.

As Captain America himself once said, “I understood that reference”

Start bidding today on over 550 original props and costumes from all seven seasons of Marvel’s Agents of S.H.I.E.L.D. Auction ends N0vember 10th, 2020 with an all day live auction video stream beginning at 11am EST/ 8am PST.

Stream Marvel’s Agents of S.H.I.E.L.D. now on ABC and On Demand!

Share
Related Articles
28.10.2020  |  Auctions ,  Marvel
THE EXTRAORDINARY EVERYMAN: Agent Coulson’s Six Greatest Moments
He may not have an iron suit, an enchanted hammer, or a vibranium shield, but Phil Coulson’s brain and bravery make him as important a hero as any in the Marvel Cinematic Universe. The cool gadgets and stylish wardrobe are pretty helpful, too.
10.09.2020  |  Auctions ,  Marvel
Learning to Survive: Tracking the Trials of Agent Coulson’s Team
Strategic, Homeland, Intervention and Logistics Division is a bit of a mouthful, so it is only fitting that S.H.I.EL.D. agents tend to bite off more than they can chew.
05.09.2018  |  Auctions
Top 10 Greatest Comic Book Artists | Highlights from EMLA 2018
Welcome to the next Preview Blog from the Propstore 2018 Entertainment Live Auction. During August and September, we will give you a weekly advance preview of some of the amazing and iconic lots that we have in store for you in this years auction… this week we’re looking at our top 10 greatest comic book artists!
23.04.2015  |  Collections
Propstore’s Marvel Superhero Collection
We take a little trip down memory lane with a look at some original props and costumes from our favourite Marvel superhero films.
Sign up to be in the know