Strategic, Homeland, Intervention and Logistics Division is a bit of a mouthful, so it is only fitting that S.H.I.EL.D. agents tend to bite off more than they can chew.

While the fictional organization that neutralized super-human threats was founded during World War II, it was not until his death and the fruition of the Avengers Initiative in 2012 that recently-revived Agent Phil Coulson was trusted with his own team of agents.

Charged with seeking out and handling potential threats before they became catastrophic, the team’s initial lineup consisted of veteran field operatives Melinda May and Grant Ward, recent science division graduates Leo Fitz and Jemma Simmons, and newly recruited computer hacker Daisy “Skye” Johnson, Coulson’s team was given relative autonomy, operating from a mobile command jet known as The BUS. During their initial time together, the team faced significant earthbound cases such as helping newly-superpowered Mike “Deathlok” Peterson contain his abilities, as well as other-worldly entanglements such as assisting Asgardian warrior Lady Sif in apprehending Lorelei, a fugitive from her realm. 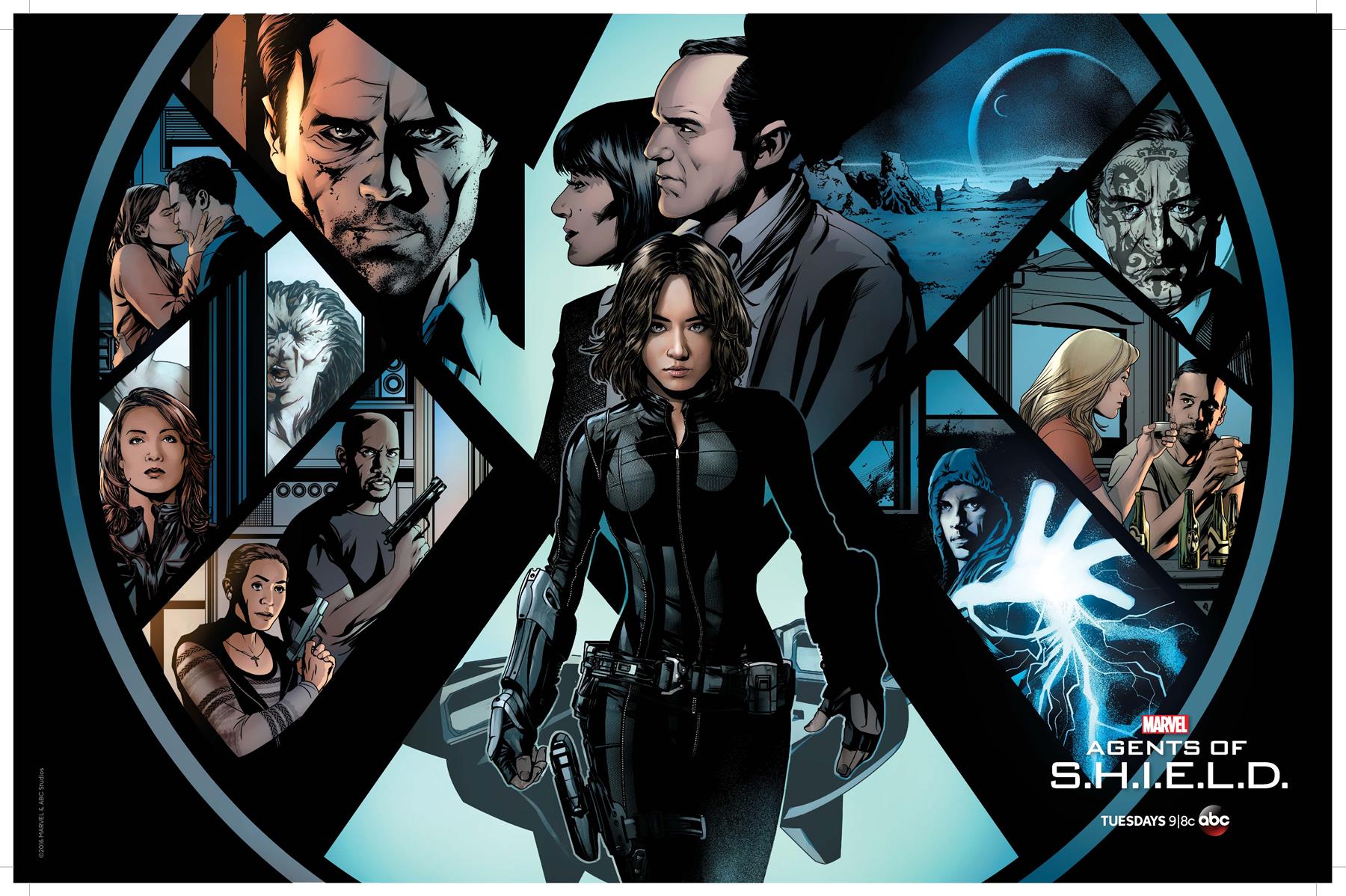 Everything changed however when then team faced its first life-alerting test during the Hydra uprising, a long-planned counterattack by the seemingly destroyed evil organization. Having spent years infiltrating S.H.I.E.L.D. with double-agents, including team member Grant Ward, the group’s coordinated sneak offensive failed to destroy S.H.I.E.L.D., but left them scattered with many casualties. Having faked his death, Director Nick Fury then entrusted Coulson with the “Toolbox” cube containing decades of S.H.I.E.L.D. knowledge and his greatest challenge yet: rebuild the organization from the ground up as their new director.

This promotion marked the end of the team’s initial brief and soon launched them into worlds and obstacles few at S.H.I.E.L.D. had ever even dreamed of before. With new recruits Alphonso “Mack” MacKenzie, Bobbi “Mockingbird” Morse and Lance Hunter, the team faced an otherworldly threat in the form of Terrigen crystals, a substance left on Earth by the Kree with the potential to give humans superpowers, turning them into Inhumans. Agent Skye’s Terrigen exposure led to vibrational and concussive abilities, giving rise to her new codename, Quake. The Inhuman threat only strengthened when Hydra returned under the leadership of Hive, an Inhuman alien who had possessed the dead body of Grant Ward. Hive used his ability to control fellow Inhumans to attempt a siege on S.H.I.E.L.D. headquarters, and while the plan was foiled, it was not without sacrifices to the organization including Quake’s break from the team to become a vigilante. Shortly thereafter, the Sokovia Accords were ratified and S.H.I.E.L.D. became a front-facing, publicly-known team with a new director: Inhuman-powered Jeffrey Mace, aka The Patriot. 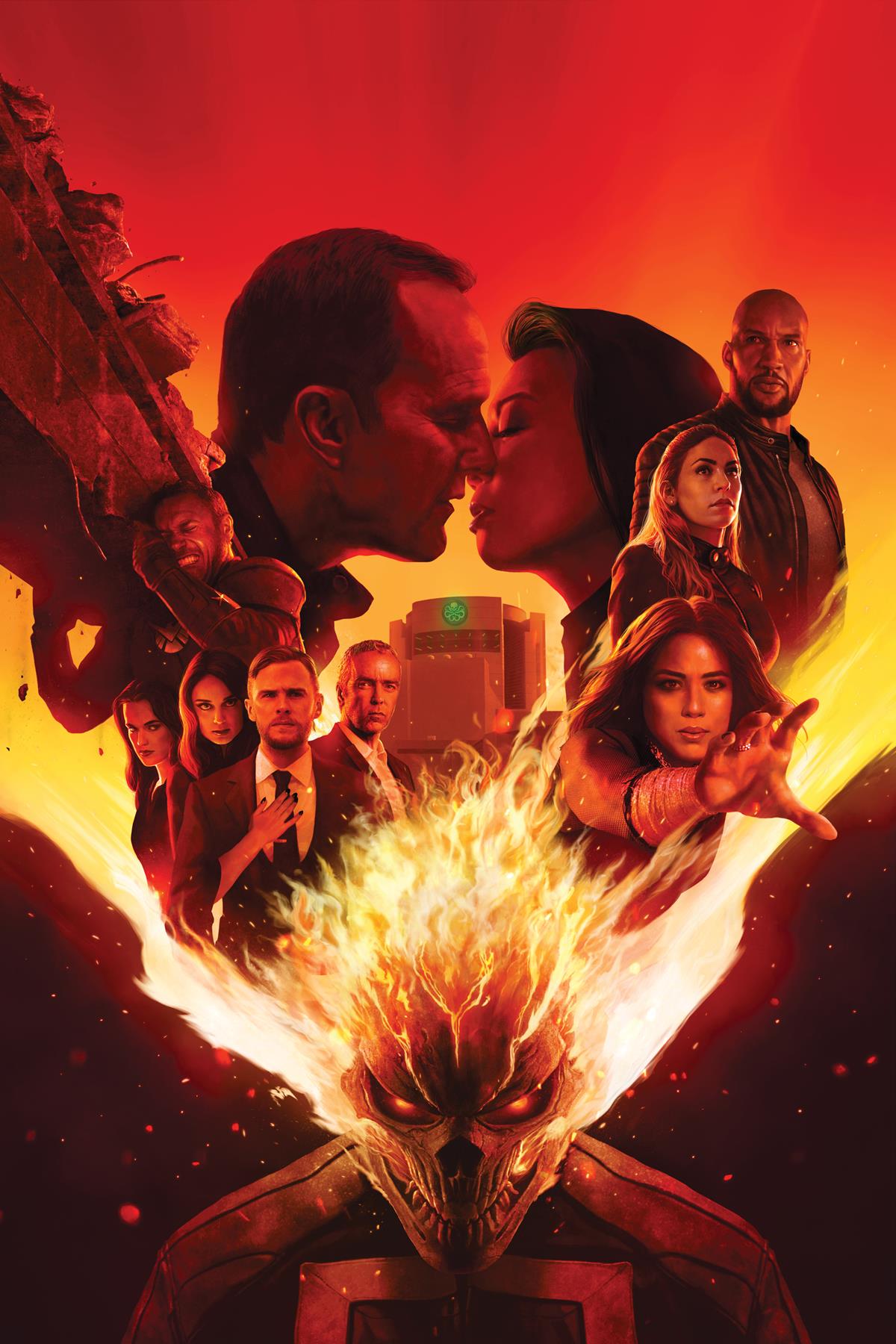 The realm of the supernatural soon enveloped the team as Coulson reunited with Quake thanks to a new superpowered vigilante, a flaming-skulled Spirit of Vengeance known as Ghost Rider. With new Inhuman recruit  Elena “Yo-Yo” Rodriguez, the team encountered an android named AIDA which was quickly corrupted by a demonic tome called the Darkhold and replaced key members of the team including Coulson, Mace, May, Fitz and Mack with Life Model Decoy (L.M.D.) androids of themselves. The captured teammates were placed in a virtual simulation known as The Framework for safe keeping, where they lived lives in which Hydra had won the war against S.H.I.E.L.D. and operated a totalitarian regime. After being freed from The Framework by Quake and Simmons, the team shared a cup of coffee and rightfully took a moment to relax and enjoy their accomplishment, having conquered their magical and technological adversary. 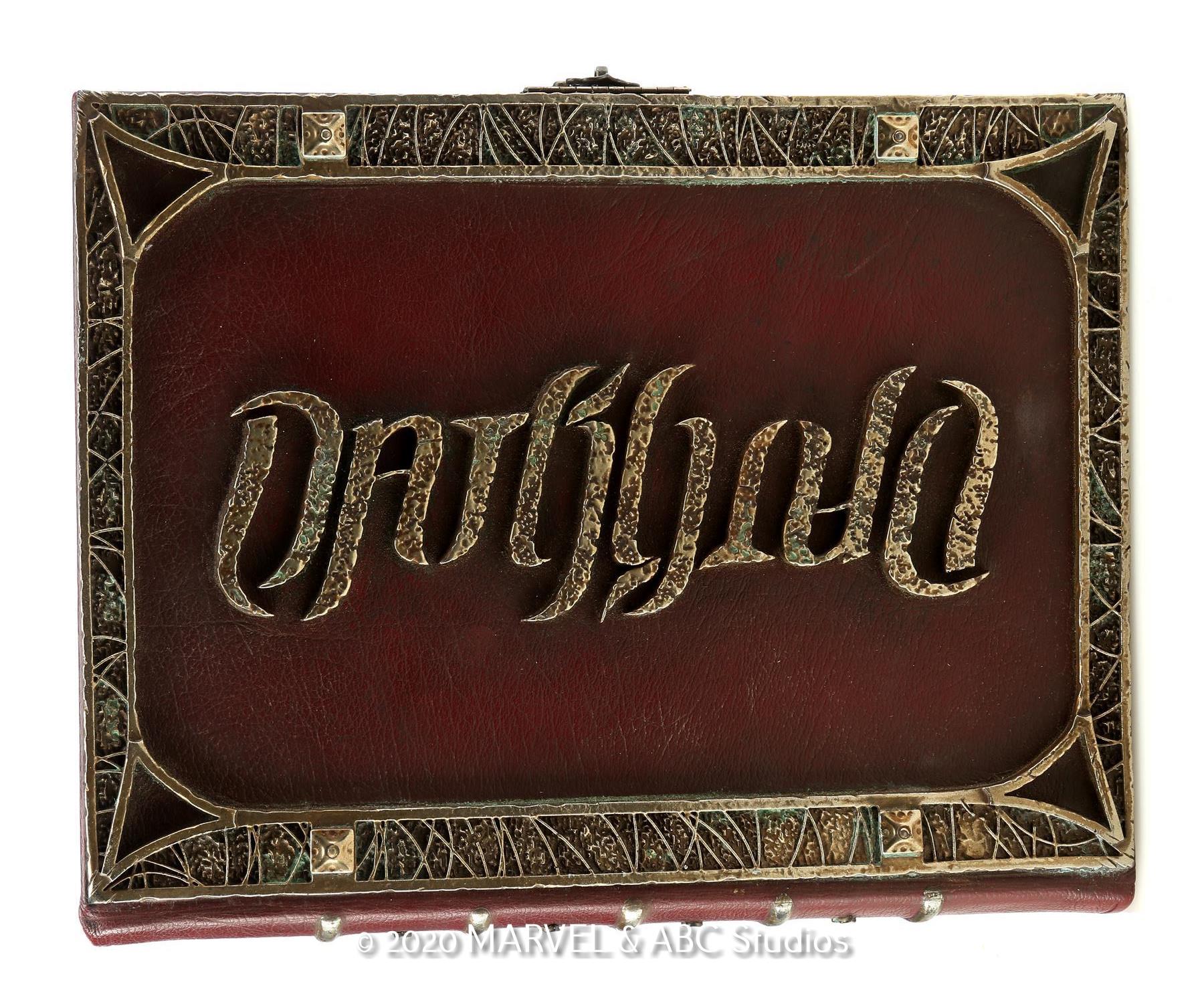 But this team meet-up didn’t end well, either.

Frozen in place by a Chronicom alien named Enoch, Coulson, May, Quake, Simmons, Mack and Yo-Yo awoke in a possible future where Quake’s powers had destroyed the Earth. What few humans remained were refugees on board “The Lighthouse,” a space station in Earth’s orbit run by a Kree overseer named Kasuis. The Kree had started to harvest humans by exposing them to Terrigen mists, then selling the newly powered Inhumans as slaves to intergalactic traders. Coulson’s team was miraculously rescued by Fitz, who managed to put himself in suspended animation long enough to awaken in their time and led the humans in a revolt against the Kree. With order restored, they used a time-controlling monolith to return to whence they came. This time displacement was not without a minor hiccup, however, as Deke Shaw, future grandson of Fitz and Simmons, was brought back with the rest of the team.

Hydra mech robots attacked the team under the leadership of Ruby Hale, a genetically-engineered teenager who managed to cut off Yo-Yo’s arms before the team’s escape (Yo-Yo was soon made whole again thanks to a pair of robotic arms). Coulson soon learned of Hydra’s plan, which involved soliciting the help of an evil alien collective known as the Confederacy, and discovered he was slowly dying from injuries sustained in the fight with Ghost Rider. During a climactic battle in Chicago, Coulson’s team managed to repel the alien invasion, losing Fitz in the melee. Having spent most of his life in service of S.H.I.E.L.D., Coulson made the decision to retire with May before succumbing to injuries, meeting death for the second time.

Mack as its new director, S.H.I.E.L.D. started to rebuild once again. The team was confronted by a group of alien mercenaries led by a being known as Sarge, himself the spitting image of the recently deceased Coulson, who came to Earth to exterminate a parasitic alien race known as the Shrike. Meanwhile, Quake and Simmons led a small team of agents into outer space to find Fitz, still held in stasis. Teamed with Enoch, Fitz and Simmons were reunited, leaving the rest of the team to return to Earth and form an uneasy alliance with Sarge to stop the Shrike. Fitz and Simmons were brought back to Earth by an alien named Izel, the mastermind behind the Shrike invasion. Teaming with Sarge, Izel attempted to use three ancient monoliths to open a portal to her home dimension, but were stopped by Mack, Yo-Yo, May, Quake and Deke.

Before they had time to celebrate their latest exhausting victory, they were whisked away by Simmons on what would prove to be the group’s final mission as a team. Simmons transported them to the 1930s on a mission to stop the Chronicoms from destroying S.H.I.E.L.D. before the organization was even created. Joined by a L.M.D. of Phil Coulson, the team continued to travel ahead in time from decade to decade to reunite with Fitz and end the Chronicom threat, saving the day for S.H.I.E.L.D. one last time. 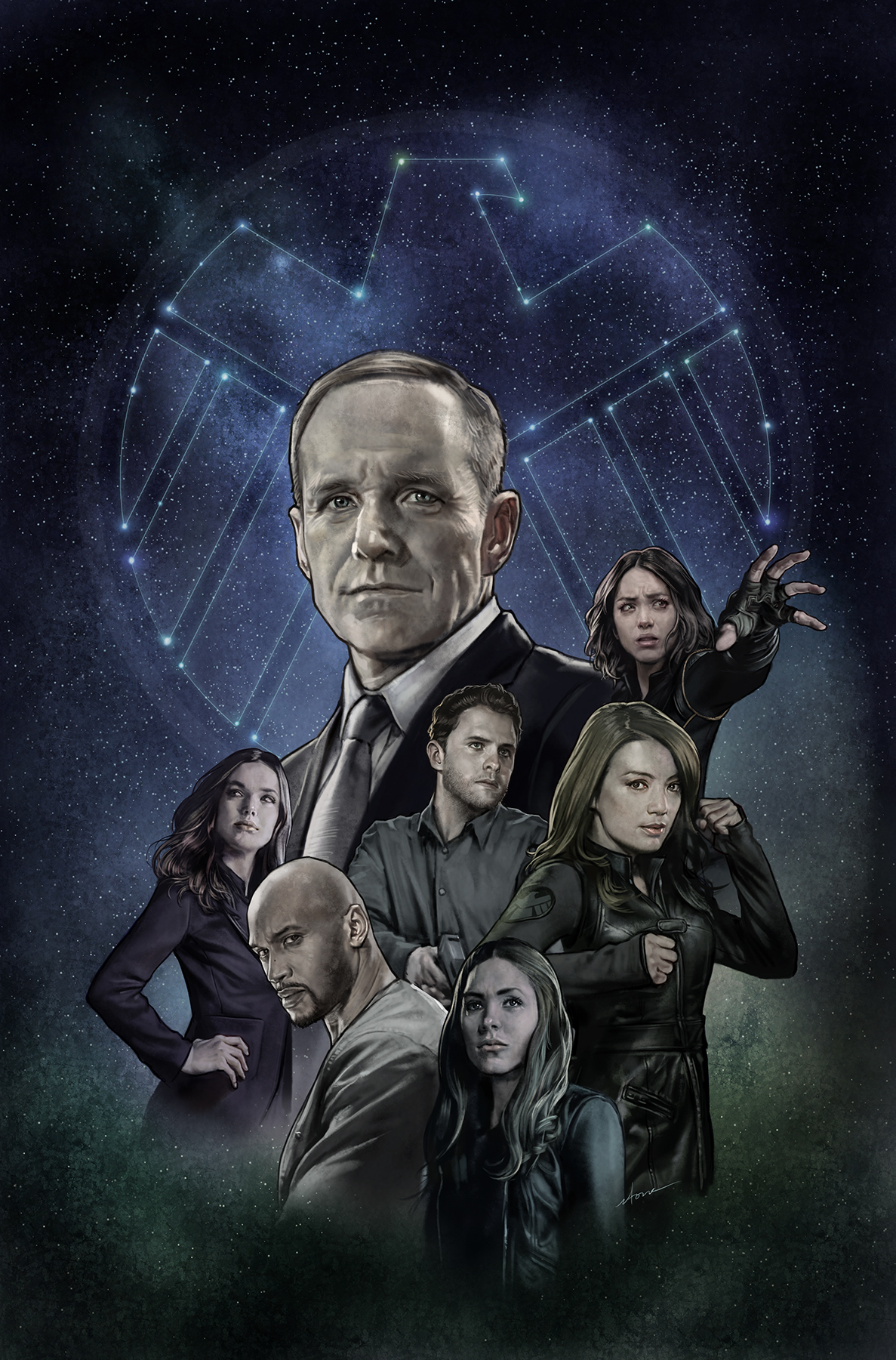 Phil Coulson’s team was assembled to stop threats before they grew large enough to destroy humanity, but along the way, each member found a new humanity within themselves. Through adventures which took them from the criminal underground to the farthest reaches of space, the ragtag group survived against impossible odds by relying on their smarts, strength and teammates.

Register now to bid on over 500 original props and costumes from all seven seasons of Marvel’s Agents of S.H.I.E.L.D. The auction begins October, 2020.

Stream Marvel’s Agents of S.H.I.E.L.D. now on ABC and On Demand!

Share
Related Articles
28.10.2020  |  Auctions ,  Marvel
THE EXTRAORDINARY EVERYMAN: Agent Coulson’s Six Greatest Moments
He may not have an iron suit, an enchanted hammer, or a vibranium shield, but Phil Coulson’s brain and bravery make him as important a hero as any in the Marvel Cinematic Universe. The cool gadgets and stylish wardrobe are pretty helpful, too.
15.10.2020  |  Auctions ,  Marvel
An Expanded Universe: Finding References in Marvel’s Agents of S.H.I.E.L.D.
Marvel’s Agents of S.H.I.E.L.D. is the ultimate convergence point of a shared universe. One which features characters, plots and items completely of its own creation, but one which also includes many references to both the 80 years of Marvel Comics history as well as over a decade of films in the Marvel Cinematic Universe.
23.04.2015  |  Collections
Propstore’s Marvel Superhero Collection
We take a little trip down memory lane with a look at some original props and costumes from our favourite Marvel superhero films.
24.07.2020  |  Collections ,  Live Auction- Los Angeles 2020
NOSTROMO: A Legend Born, And Born Again l Entertainment Memorabilia Live Auction – Los Angeles 2020
The cover piece for our first ever Los Angeles-based Entertainment Memorabilia Live Auction is the 11-foot long filming miniature of the Nostromo from Ridley Scott’s horror classic, Alien. This artifact has been a part of Propstore’s company collection for over a decade, but wasn’t always in the camera-ready shape you see it in now. Read […]
Sign up to be in the know