Ask any toy collector which treasure they’d most like to own, and the chances are they’d all tell you the same thing: a rocket-firing Boba Fett.

The laconic intergalactic bounty hunter is widely regarded as the Star Wars saga’s coolest character, with his Spaghetti Western-style, jetpack armour and that iconic, narrow-slit helmet visor, which suggested a cruelty and merciless precision far beyond the Empire’s clumsy stormtroopers. But this isn’t why he’s so sought after in action-figure form. At least, not entirely. 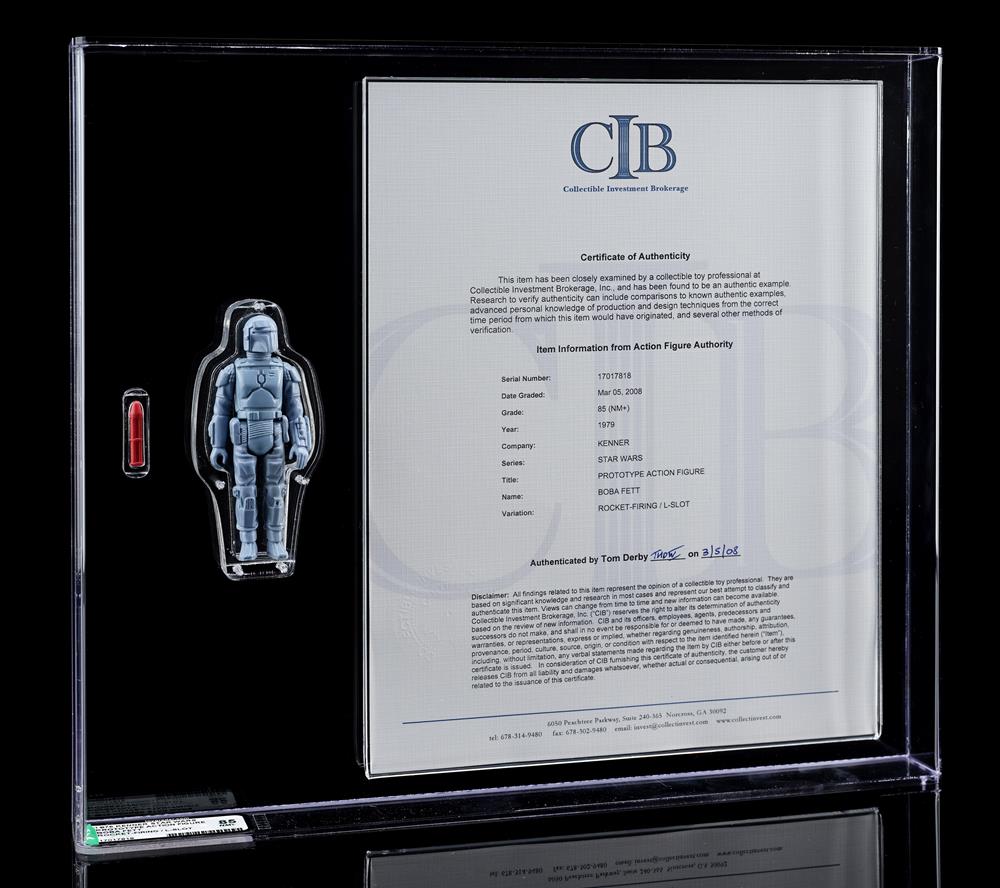 Fett was incongruously introduced to the world during an animated segment of the notoriously dire Star Wars Holiday Special in 1978, priming young Star Wars fans for this intriguing and exciting new antagonist’s appearance in The Empire Strikes Back long before the sequel arrived. Such anticipation was further stoked by action-figure manufacturer Kenner which, in 1979, advertised this “new evil villain” as a promotional mailaway offer. In return for four proof-of-purchase seals, Kenner promised to send a Boba Fett figure complete with a “Rocket Firing Back Pack” and two rockets. However, when the toy finally shipped, it arrived to its eager recipients with a non-firing rocket-pack and a letter of apology. 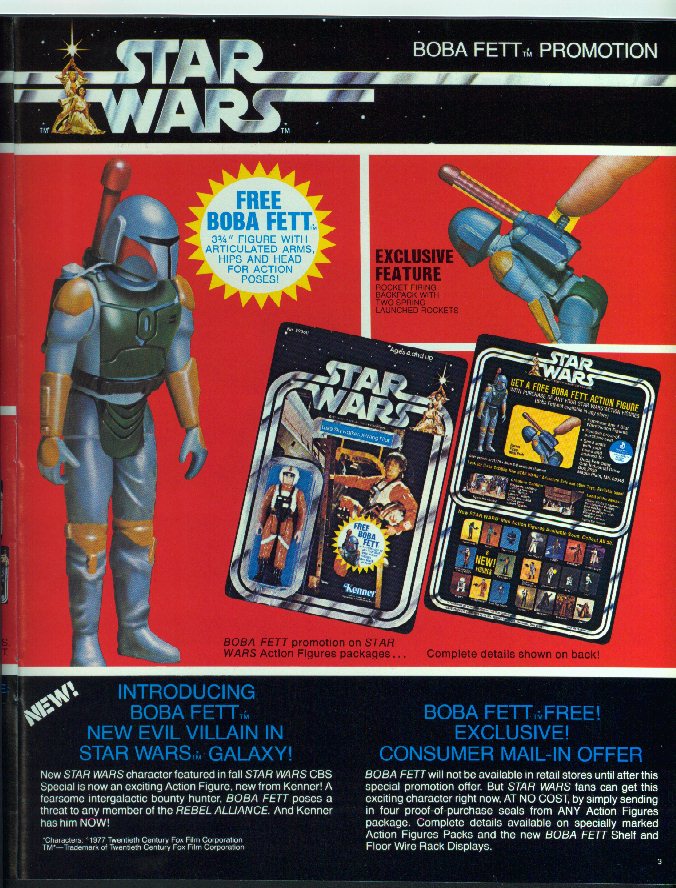 This is why the original figure is such a rarity. Fewer than 100 are in existence, none of which ever passed the prototype stage and many of which remain unpainted. The reason for Kenner’s switch is widely believed to have been driven by safety concerns, after a similar projectile-launching toy accidentally caused a child’s death late the previous year and triggered widespread product recalls. Yet, as noted by Chris Georgoulias of the Star Wars Collectors Archive, Kenner’s decision to trash its firing-rocket figures actually predates the reporting of that tragic incident. In short, the truth of the story is that it was a broader quality-control issue. 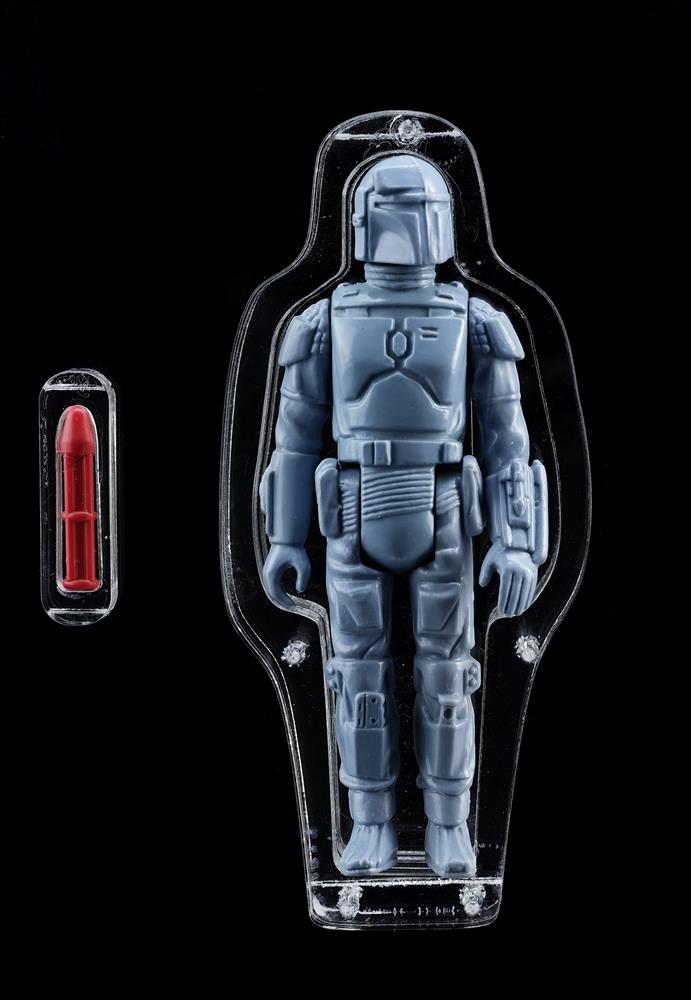 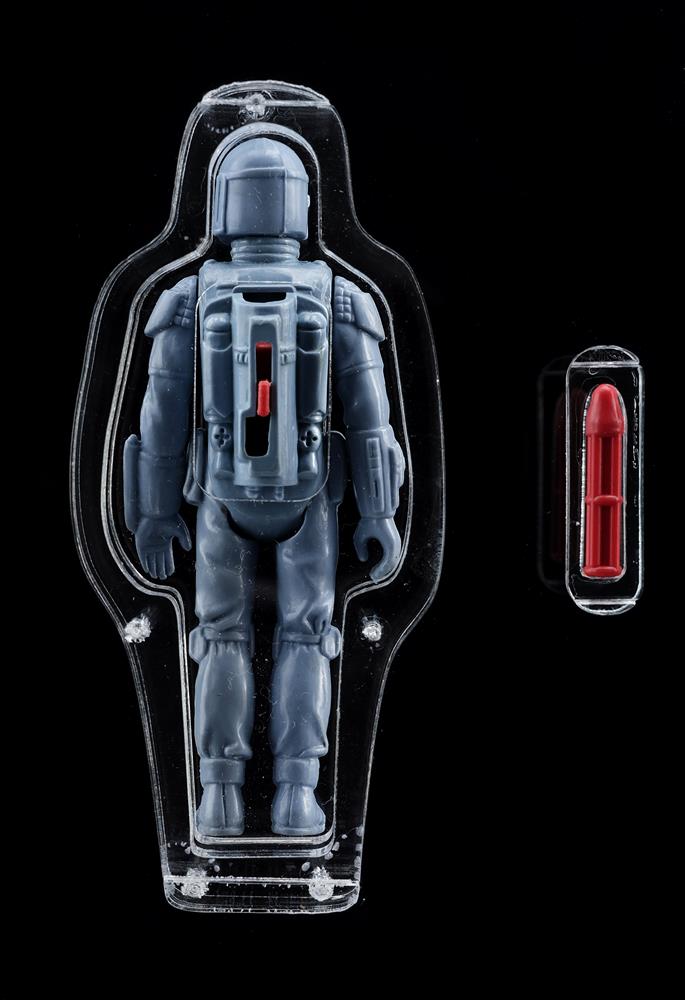 The first iteration of the rocket-firing toy is known as the “L Slot” Boba Fett. This name refers to the shape of the firing mechanism in the figure’s back, which held a spring-loaded tab. The problem was, without anything to hold the tab in its ‘loaded’ position (at the base of the ‘L’), it was too easy for the rocket to be launched unintentionally. The improved design reconfigured the slot into a ‘J’ shape, whereby the firing tab was better secured by being nestled next to an extra piece of plastic. The problem with the “J Slot” Fett, however, was that this extra piece was too easily snapped off. The safest and smartest option, then, was to leave the notorious bounty hunter with a rocket that couldn’t fire at all.
Not that it damaged the remorseless Mandalorian’s reputation. He continues to be a fan-favorite character, whose look (ingeniously exploited for hit Disney+ show The Mandalorian) has never gone out of style – even with a grounded rocket.

Share
Related Articles
08.11.2019  |  Auctions
The Toys Are Back In Town
Toy collecting, it seems, has never been more popular. If TV shows like Netflix’s The Toys That Made Us or the Discovery Channel’s Toy Hunter are anything to go by, the power of nostalgia has driven more people than ever before to seek out playthings from their childhood, whether for the sheer gratification of their […]
26.02.2019  |  Auctions
Toy Story: Propstore Launches Its First Vintage Collectibles Auction…
Propstore’s current Vintage Toys And Collectibles Live Auction represents another ground-breaking first for the company. In bringing together 750 original production toys, international collectibles, posters, cast & crew items into one auction, it is the first time Propstore has moved into the toy collecting space with a carefully curated selection from some of the world’s […]
04.09.2018  |  Auctions
5 Reasons Why Han Solo Is The Greatest Star Wars Character
Welcome to the newest of our Preview Blogs from the Propstore 2018 Entertainment Live Auction. During August and September, we will give you a weekly advance preview of some of the amazing and iconic lots that we have in store for you in this years auction… this week we’re looking at 5 Reasons Why Han Solo Is The […]
07.05.2015  |  Collections ,  Uncategorized
Star Wars Special: Original Trilogy Production Material
It’s Star Wars Week here at Propstore! As part of our celebrations we’re sharing some of the iconic Original Trilogy (OT) production material that has been added to the website this week. Whether you’re loyal to the OT, or are counting down the Parsecs until The Force Awakens, we’ve got some incredible relics to tantalise […]
Sign up to be in the know