By Matt Truex on 24.04.2018  |  Auctions ,  Uncategorized
“This is Major”: Highlights from the Ghost in the Shell Auction
Share

Major Mira Killian is one of Public Security Section 9’s best agents, and their secret weapon. Though most of the team is cybernetically enhanced, Major is lightyears beyond them, with an organic brain housed in a fully synthetic shell designed for the film by Weta Workshop. But while Major’s technological attributes make her a living weapon, her new body and fractured memory keep her from feeling truly human. Reboot your drives and take a deep dive with us into some of Major’s most memorable lots in the Ghost in the Shell Auction. 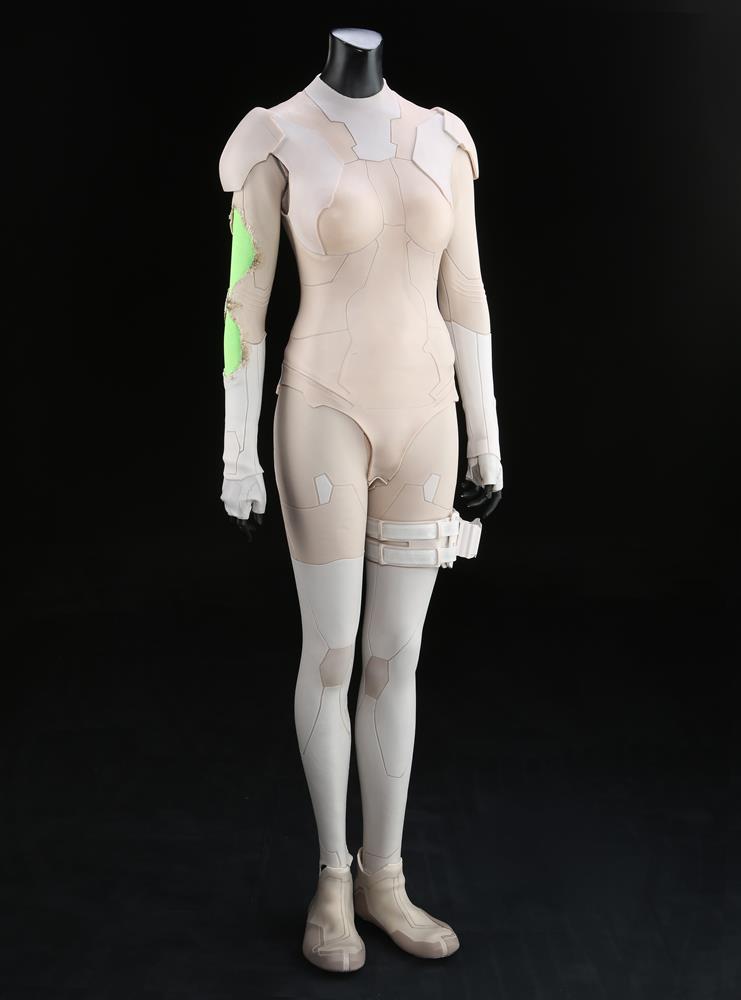 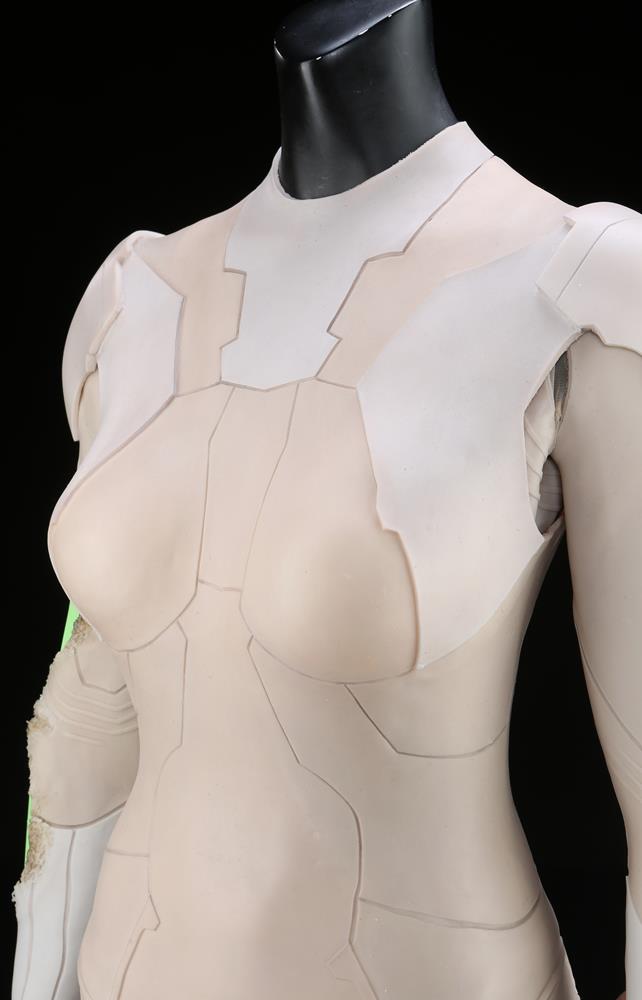 Easily Major’s most advanced tool as a Section 9 agent is her thermoptic suit. Designed to hide any trace of her, the thermoptic suit is invisible on radar scans and even to the naked eye, allowing Major to keep the element of surprise during an attack. Made at Weta Workshop, this incredible, skin tight suit consists of a body suit, torso, gloves and boots, all made primarily from flesh-colored silicone. A resin thigh holster completes the lot.

The cacophony of Hong Kong’s congested streets and holographic projections is a tough place to clear your mind, so when Major feels the need to, she goes to where the city can’t reach her. Under the Hong Kong harbor, Major floats through a pod of jellyfish, contemplating her past and future. Like the thermoptic suit, Major’s wetsuit was custom-made by production, and features a grey/blue patchwork design with a fishnet pattern throughout. A pair of large fins and a weight vest care also included.

While Major’s thermoptic suit is perfect for stealth infiltration, Section 9 usually relies on the direct approach when apprehending a suspect. Based on modern police equipment, the tactical uniforms made for the Section 9 team are made of nylon and are equipped with chest and leg armor for additional protection. Major’s uniform also features a thigh holster and long glove on her left hand. This lot also includes a resin machine gun, making this the most fully equipped tactical lot in the auction.

Despite her cybernetic shell, Major’s physical alterations do not stop her from walking through the world like an average person. Dressed in her distinct bomber jacket and outfit, no one would suspect Major to be one of the most advanced technological achievements ever created. The black bomber jackets features swamp green patches and piping as well as a neon orange strip along the right side of the jacket’s opening. A grey tank top, spandex pants, and boots complete Major’s incognito appearance, with a pair of earrings and two Hanka medi packs included as well.

These lots and many more are open for bidding now in Propstore’s GHOST IN THE SHELL Auction, with lots closing Friday, May 4th. Thank you for joining us for our blog coverage and be sure to check out our other articles in our auction series!

Share
Related Articles
10.01.2019  |  Auctions
Your Future Self: Enhancement from the Ghost in the Shell Auction 2.0
The near-future world of Ghost in the Shell presents a technological landscape where humanity and machine intersect at every corner. In a film concerned with questions of humanity and preserving one’s “self”, the world around the characters has been specifically designed to work against their better judgement, with technological advancements constantly on offer to distract […]
02.05.2018  |  Auctions ,  Uncategorized
The Near Future: Highlights from the Ghost in the Shell Auction
The world of Ghost in the Shell presents a future of almost total technological emersion. With holographic projections dancing on every building and cybernetic enhancements more common than haircuts, technology has seeped into every aspect of life in Major and Batou’s world, for better and worse…
20.11.2020  |  Live Auction - London 2020
Batman and the Joker | Designing Gotham
In this blog, we are looking into the design of two characters who are the epitome of hero vs. antihero – Batman and his infamous arch nemesis, the Joker – and how over several decades, the look of both has dramatically transformed.
15.02.2017  |  Auctions
Propstore’s G.I.Joe Auction Presents… Costumes
There’s only a few days left to go in the G.I. Joe Auction, so before you get your bids in, take a look at some of our favourite costumes used in the production of the action adventure G.I. Joe: The Rise Of The Cobra…
Sign up to be in the know