By Matt Truex on 02.05.2018  |  Auctions ,  Uncategorized
The Near Future: Highlights from the Ghost in the Shell Auction
Share

The world of Ghost in the Shell presents a future of almost total technological emersion. With holographic projections dancing on every building and cybernetic enhancements more common than haircuts, technology has seeped into every aspect of life in Major and Batou’s world, for better and worse… 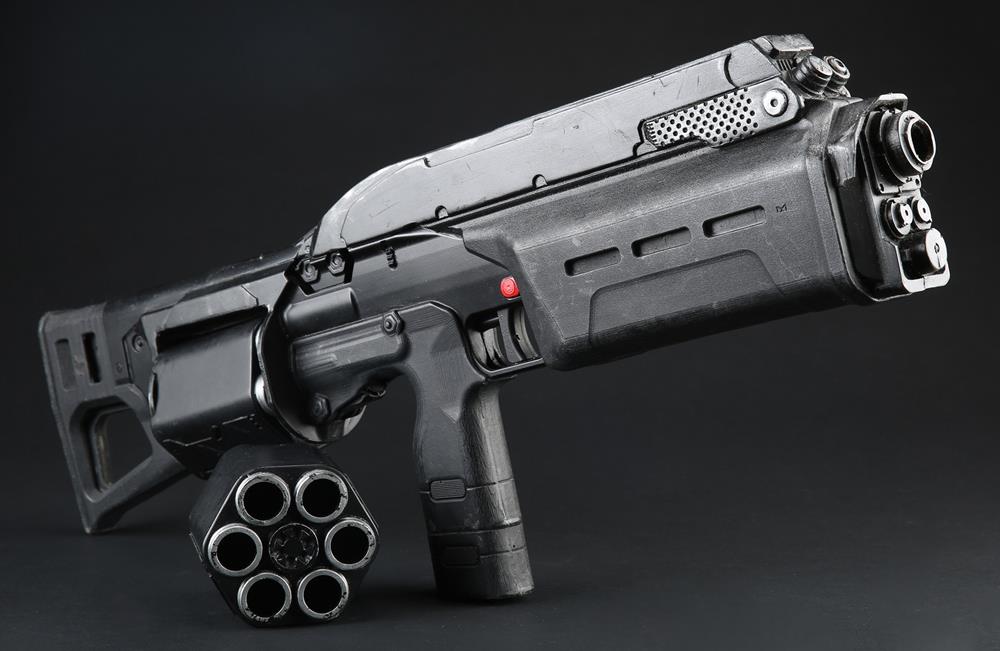 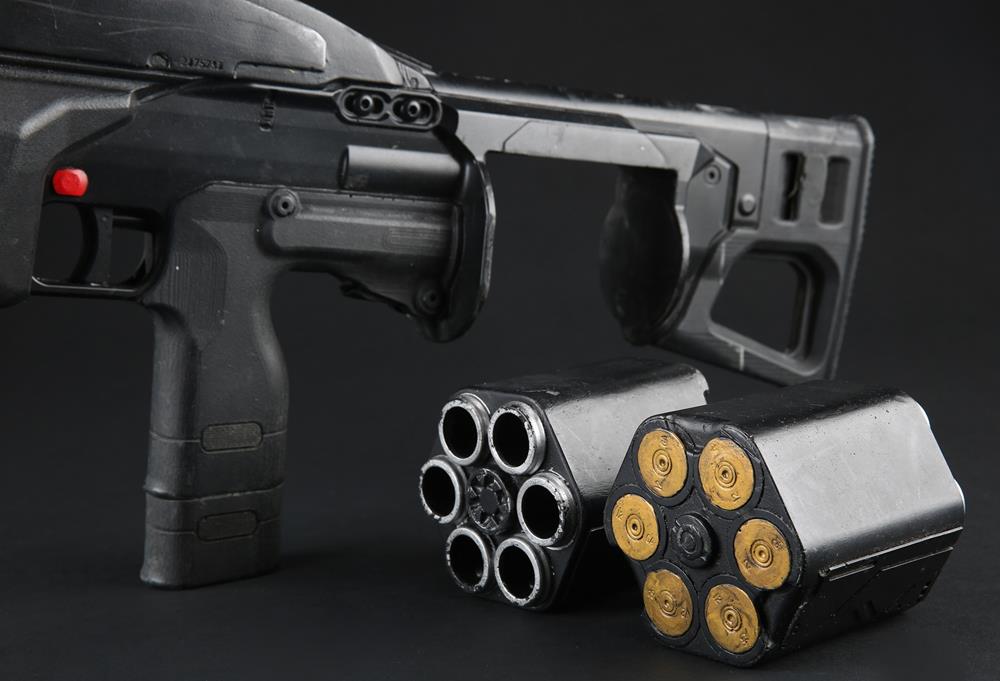 With technological advancements so prevalent in the world around him, it’s no wonder that Section 9’s Batou is armed with the toughest firearm around. Like many firearms created for the film, Batou’s custom revolving shotgun is based on an existing rifle that has been heavily modified to fit with the rest of Ghost in the Shell’s future. The real weapon’s thin barrel design has been replaced with a sturdy, stocky front end, leaving the stock and revolving ammunition cylinder mostly unchanged. This non-functional prop gun also includes an extra ammunition cylinder.

In a world where robotic assistants have become commonplace, it isn’t hard to imagine similar technology being put to more intimate use. The geisha bots seen in the Hotel Maciej sequence are a perfect hybrid of traditional design and futuristic technology. The hair of this Geisha head is sculpted in a traditional Japanese style- with white, pink, and red designs standing in for makeup on the robotic face. This particular lot was made for use after Major and the Section 9 team destroy the geisha bots attacking a banquet dinner, and therefore features a “shot out” left eye and detached chin and cable pieces.

But despite their refined outward appearance, a geisha bot is no different than any other robot, as seen here. The only full body robot lot in the auction, this geisha bot exposes the hidden secrets behind all the robots in the Ghost in the Shell universe, with a paired down, segmented take on the human body. 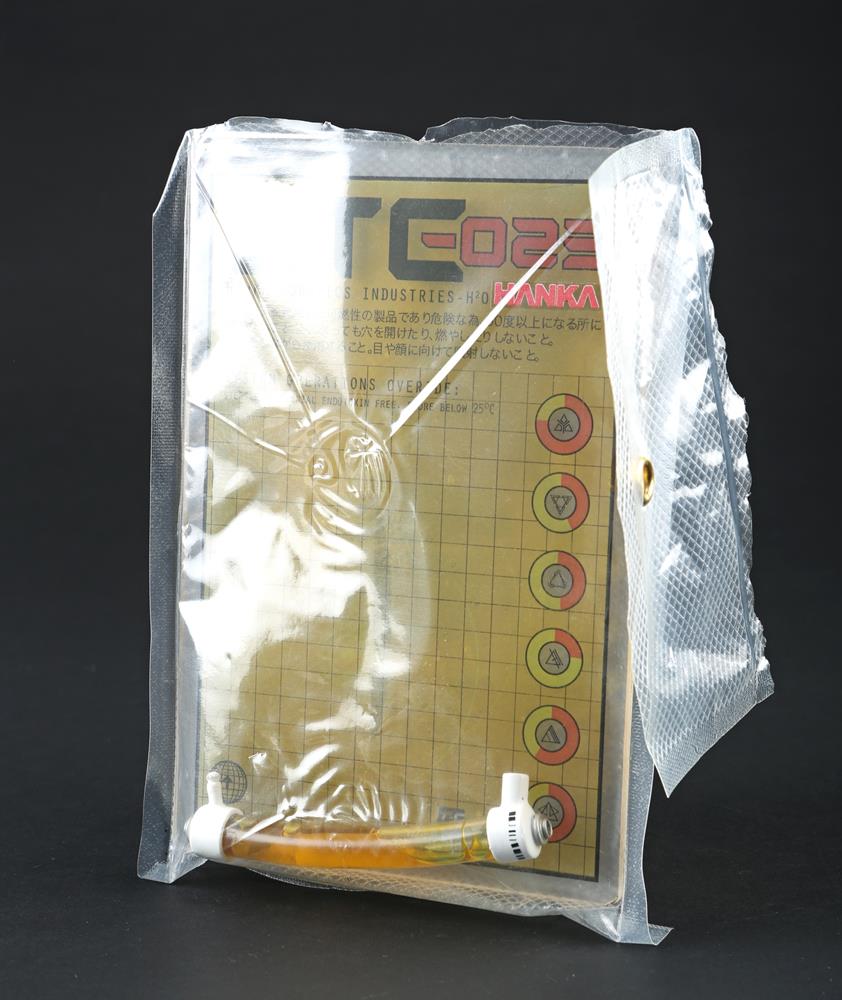 While fully robotic creations like the geisha bots are an impressive milestone for the world of Ghost in the Shell, the film is much more concerned about where the line separating organic flesh and cybernetic enhancements starts to blur. No character represents that better than Major. A brain transfer patient in a completely cybernetic body, even Major’s medication must be administered differently, preferably through a port at the base of her neck. Unaware of the solution’s true purpose, Major regularly administered self-care through the use of here Hanka Medi Packs. 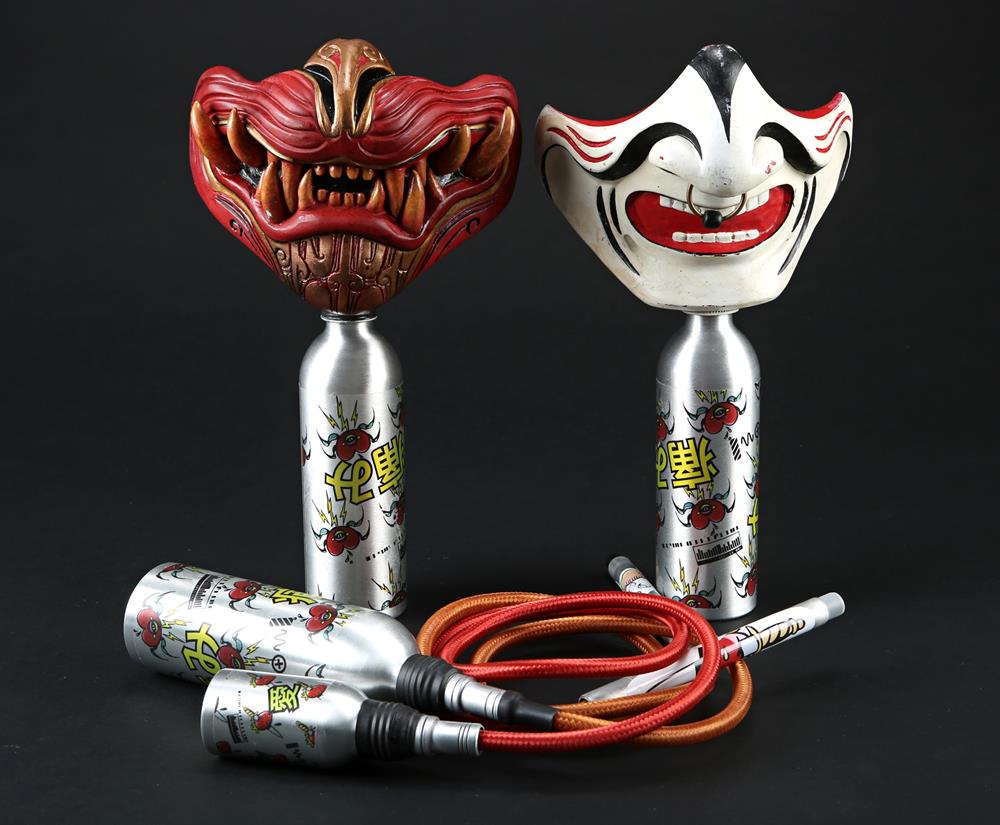 Even when technology advances to unforeseen heights, people are always people, with feelings, fears, and vices. When Major and Batou investigate a hidden away Yakuza bar, many patrons are seen watching holographic images while using huffing masks like these. Designed after the traditional Kabuki style, these ornate masks connect to bottles of who-knows-what and likely leads to a good night and a rough morning. Mask too obtrusive? This lot also includes two mini huffers with hoses.

These lots and many more are open for bidding now in Propstore’s GHOST IN THE SHELL Auction, with lots closing Friday, May 4th. Thank you for joining us for our blog coverage and be sure to check out our other articles in our auction series!

Share
Related Articles
10.01.2019  |  Auctions
Your Future Self: Enhancement from the Ghost in the Shell Auction 2.0
The near-future world of Ghost in the Shell presents a technological landscape where humanity and machine intersect at every corner. In a film concerned with questions of humanity and preserving one’s “self”, the world around the characters has been specifically designed to work against their better judgement, with technological advancements constantly on offer to distract […]
28.01.2019  |  Auctions
Gearing Up: Highlights from the Ghost in the Shell Auction 2.0
In a world of rampant technological advancements, it is often hard to keep perspective on how much the new devices effect our daily lives. Anyone with a smartphone has gone from relative anonymity to having a computer, and GPS, in their pocket practically all day long. But, advancements like the internet and smart phones were […]
24.04.2018  |  Auctions ,  Uncategorized
“This is Major”: Highlights from the Ghost in the Shell Auction
Major Mira Killian is one of Public Security Section 9’s best agents, and their secret weapon. Though most of the team is cybernetically enhanced, Major is lightyears beyond them, with an organic brain housed in a fully synthetic shell designed for the film by Weta Workshop. But while Major’s technological attributes make her a living […]
20.05.2016  |  Collections
Propstore Collections Presents Ark Of The Covenant Ghost
Welcome to our continuing series of collections blogs as Propstore’s team digs into the archives and unearths some amazing items. We talk about the film, explore the history of the prop or costume and explain why we love it so much. In this entry, a terrifying guardian of an ancient relic that brings death to […]
Sign up to be in the know