The near-future world of Ghost in the Shell presents a technological landscape where humanity and machine intersect at every corner. In a film concerned with questions of humanity and preserving one’s “self”, the world around the characters has been specifically designed to work against their better judgement, with technological advancements constantly on offer to distract from the harsh realities of physical life. Preview some of the auction lots now before bidding begins January 16th. 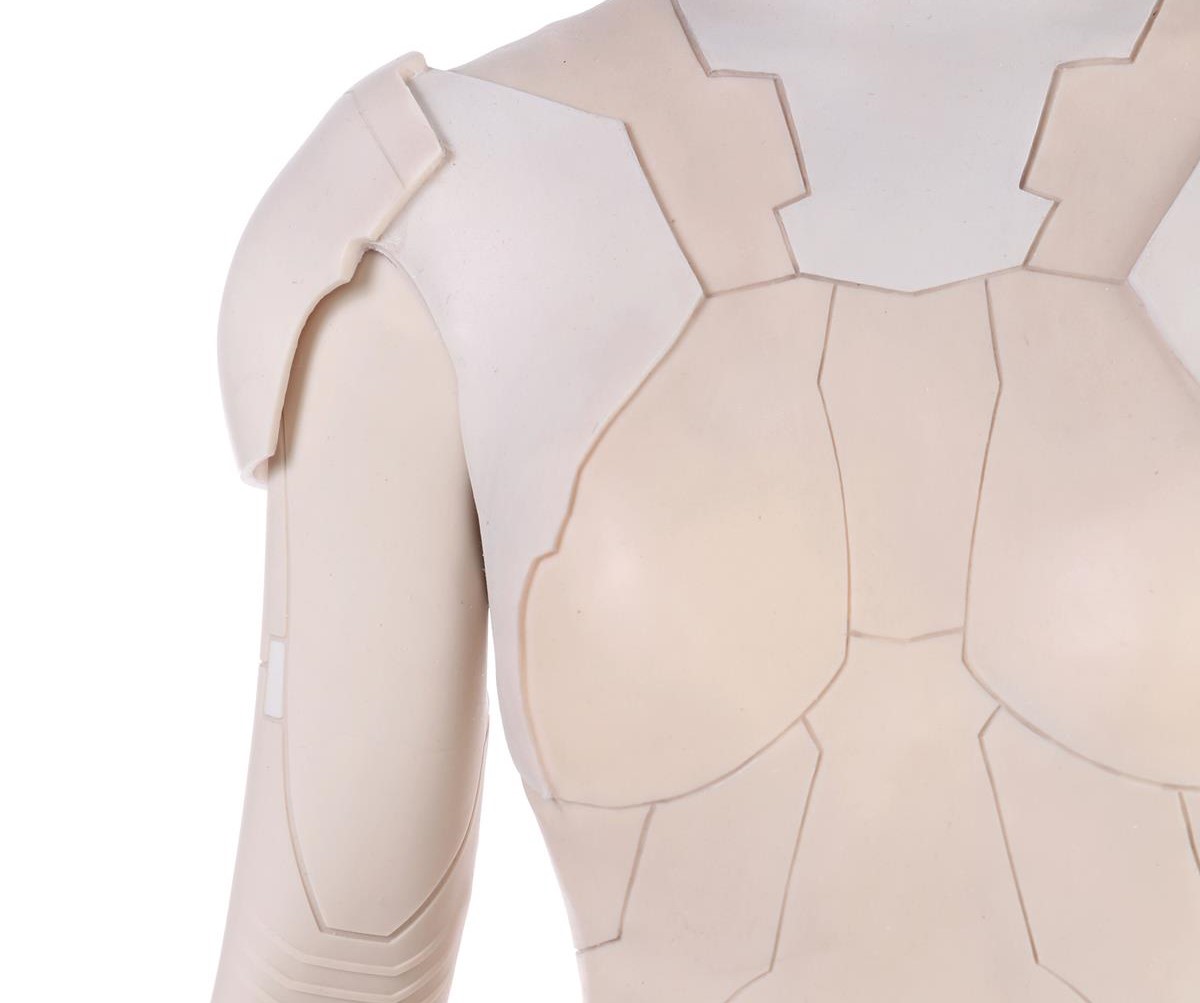 Major Killian’s (Scarlett Johansson) relationship with technology is fraught with trauma, and defines her physical life. With her mind now hosted in a synthetic shell, Major’s body is fully customizable and, as such, functions completely differently from human tissue. 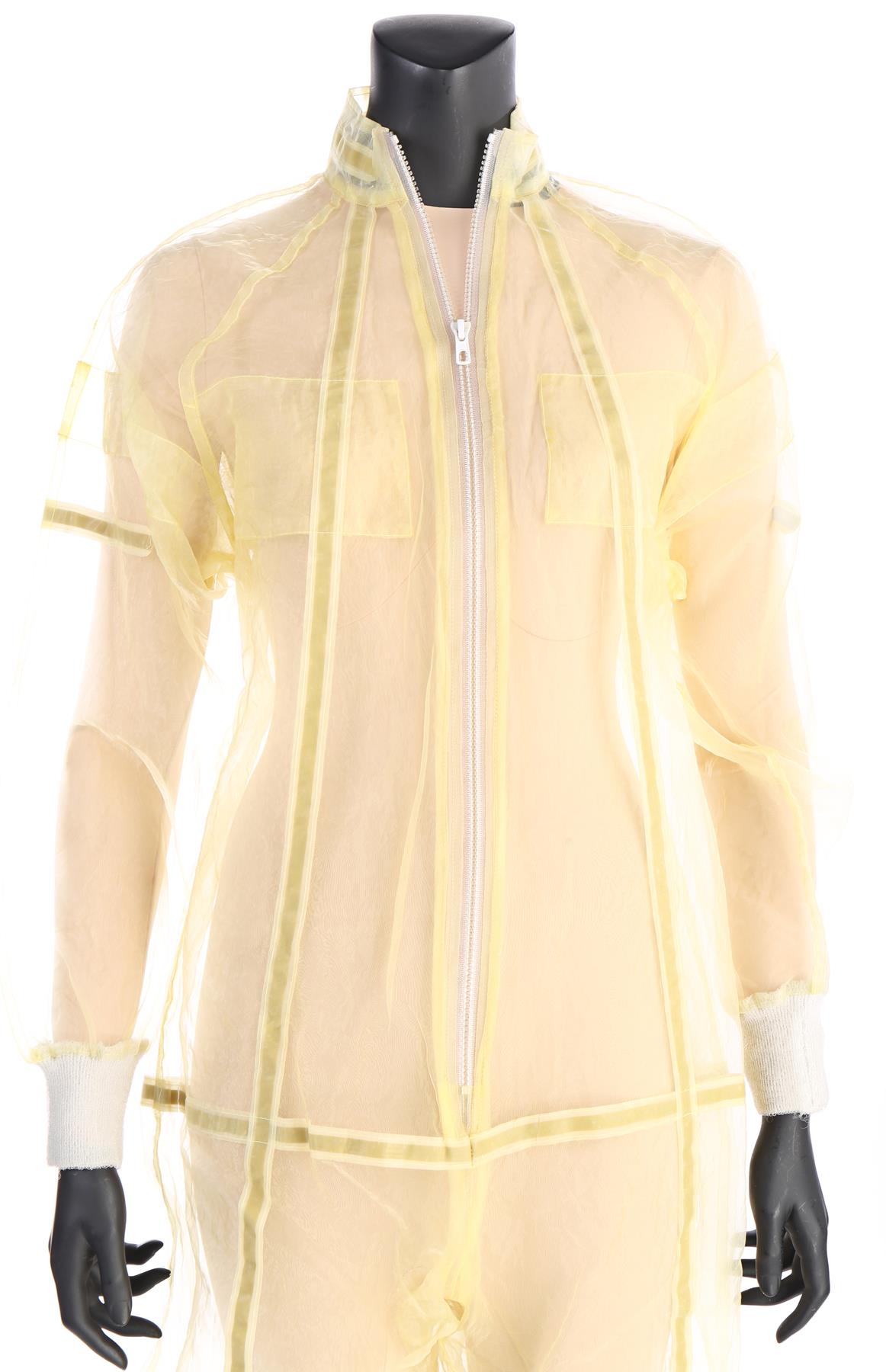 Major no longer needs traditional sleep, for instance, though she does need to recharge. When her charge is low, Major dresses her cybernetic body in a yellow, Nylon jumpsuit and connects her neck ports to her charging station. This act is an excellent example of how human life is affected by the over-abundance of technology available, changing the human condition at a level as basic as sleep. But despite these technological short-comings, a cybernetic shell does have a few advantages.

Thermoptic technology is among the most advanced equipment seen in the film. Designed for simplicity and functionality by legendary effects house Weta Workshop, Major’s thermoptic suit hugs tight to the body and provides the agent a full range of mobility in combat. Adjustable and repairable, the suit’s most intriguing function is its ability to render the wearer nearly invisible. 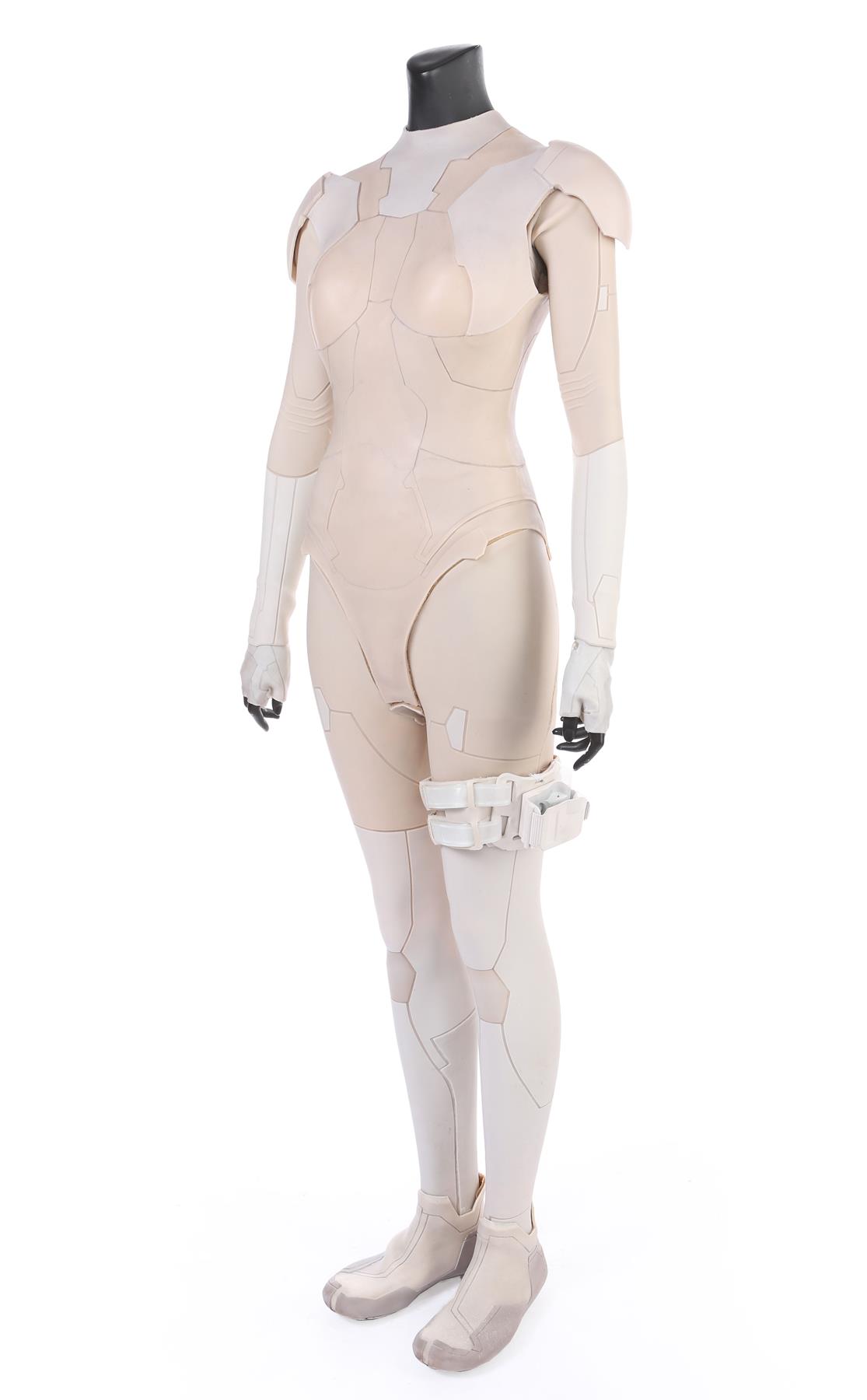 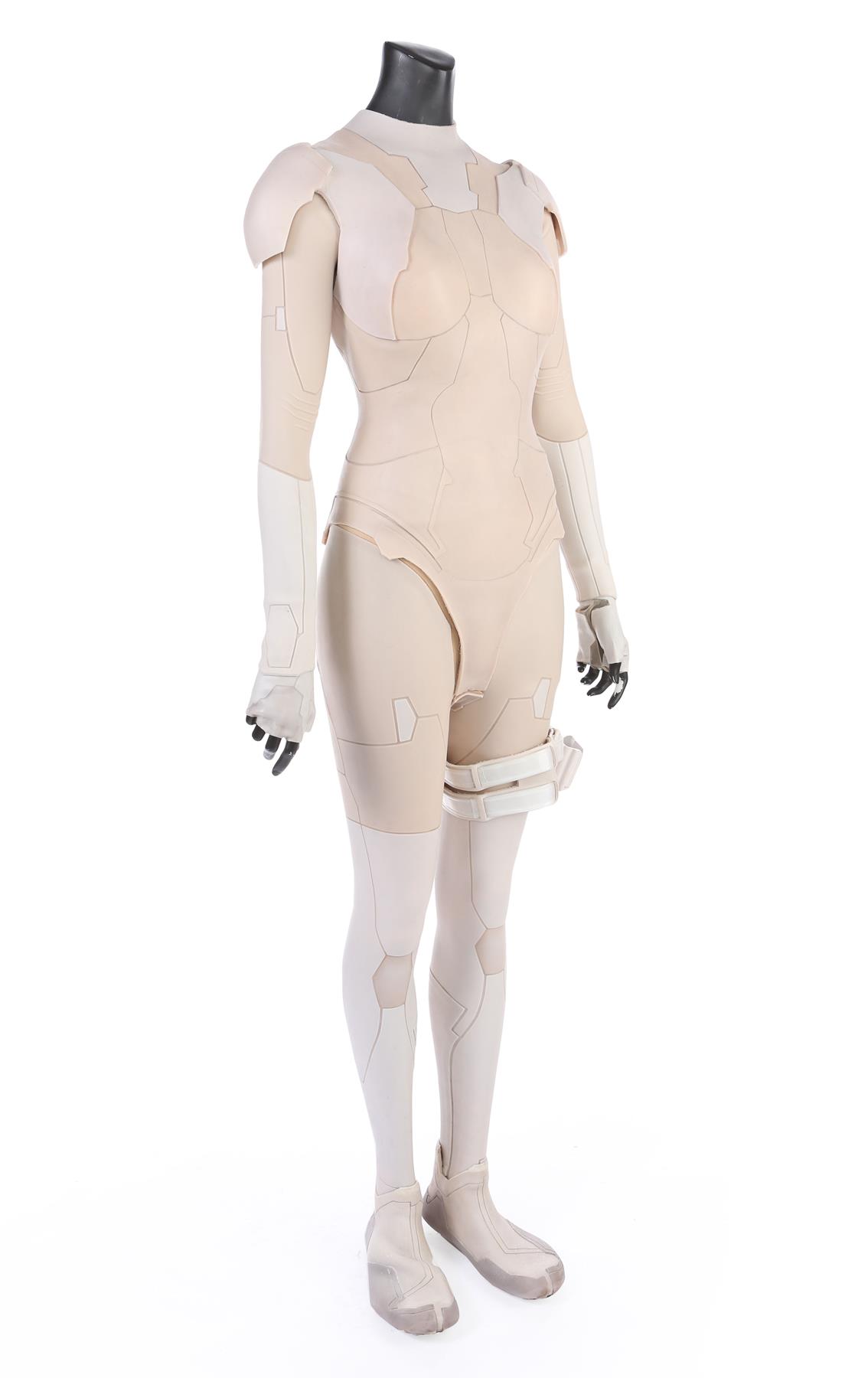 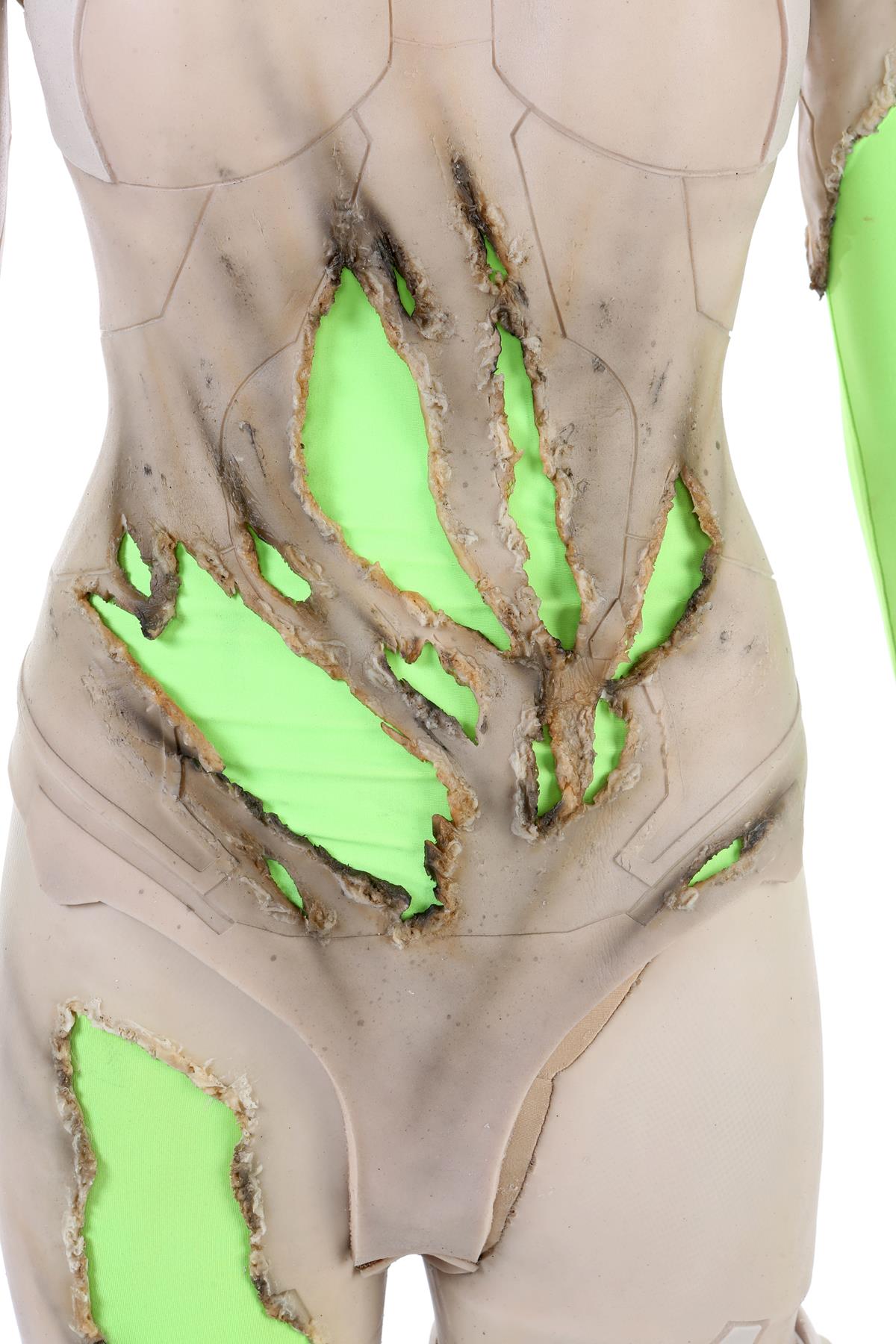 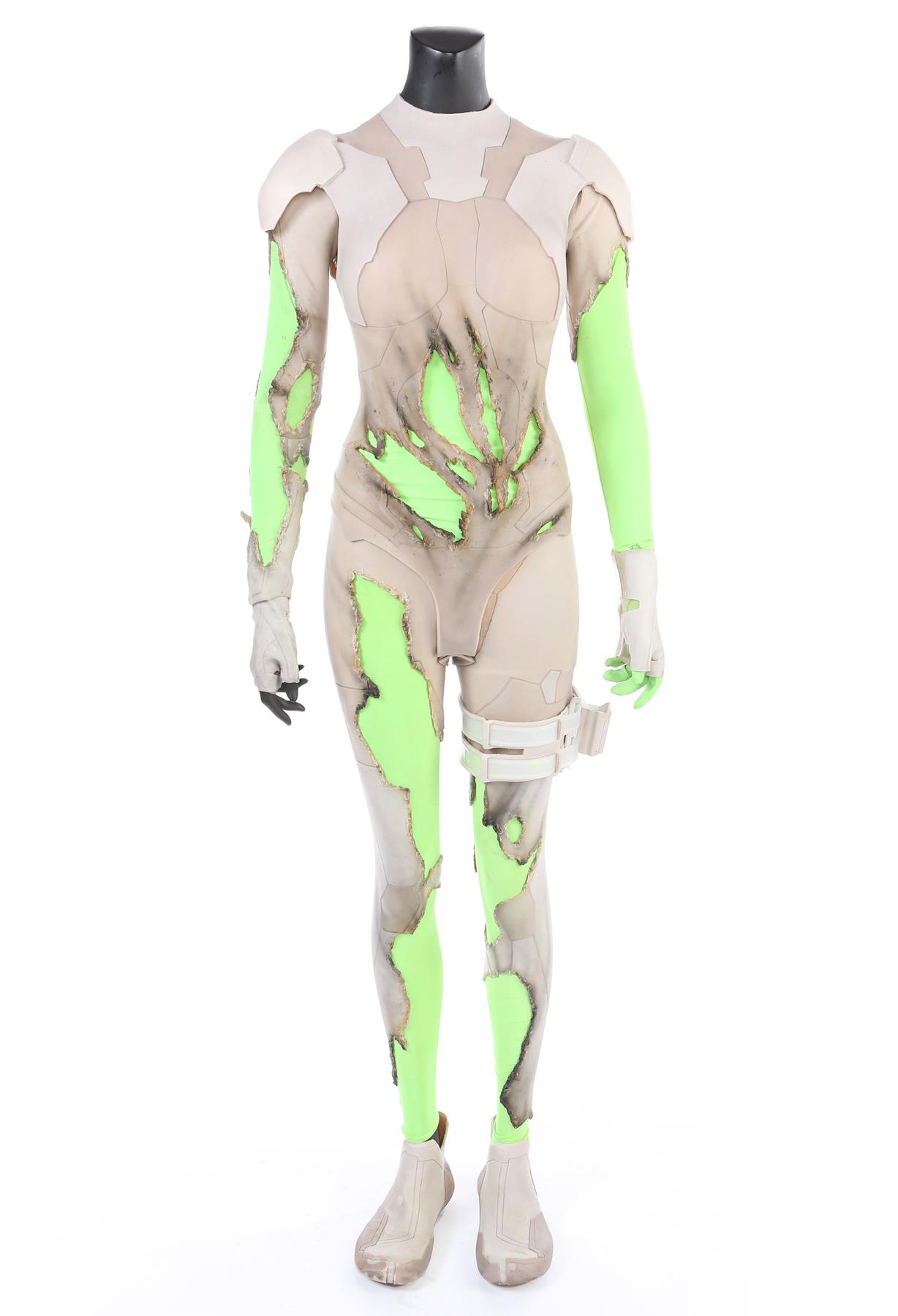 Worn under her uniform for much of the film, the suit suffers catastrophic damage during Major’s final confrontation with Cutter’s (Peter Ferdinando) Spider Tank, exposing the wires and technology under her silicone skin. This was achieved in the film through use of digital effects, with specially designed, Weta-made, battle-damaged versions of the suit featuring torn sections and green screen under pieces, later replaced digitally. 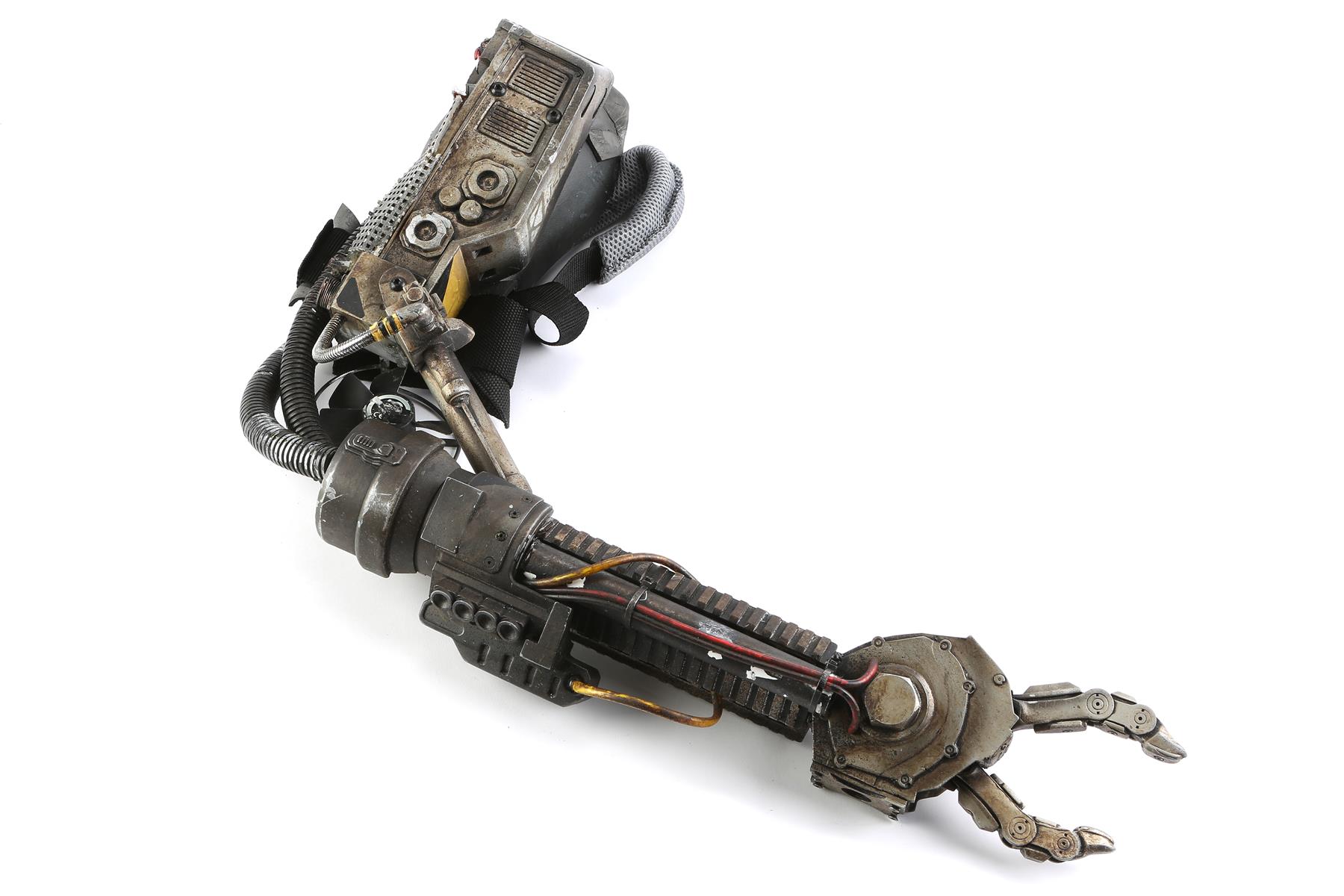 While Major’s enhancements are top-of-the-line, most people do not have such exclusive upgrades available to them, making the chasm between the film’s “haves” and “have-not’s” all the more prominent. As the rich augment themselves to follow the latest trends, the rest of the city makes do with hacked-together scraps and cumbersome additions to their bodies. These street-level enhancements are just as likely to short out as they are to function properly. The arm pictured above is certainly not a high-quality prosthesis fresh from the factory, but a kit-bashed mess of a limb that gives the impression that it was built from spare scraps or patched together too many times. 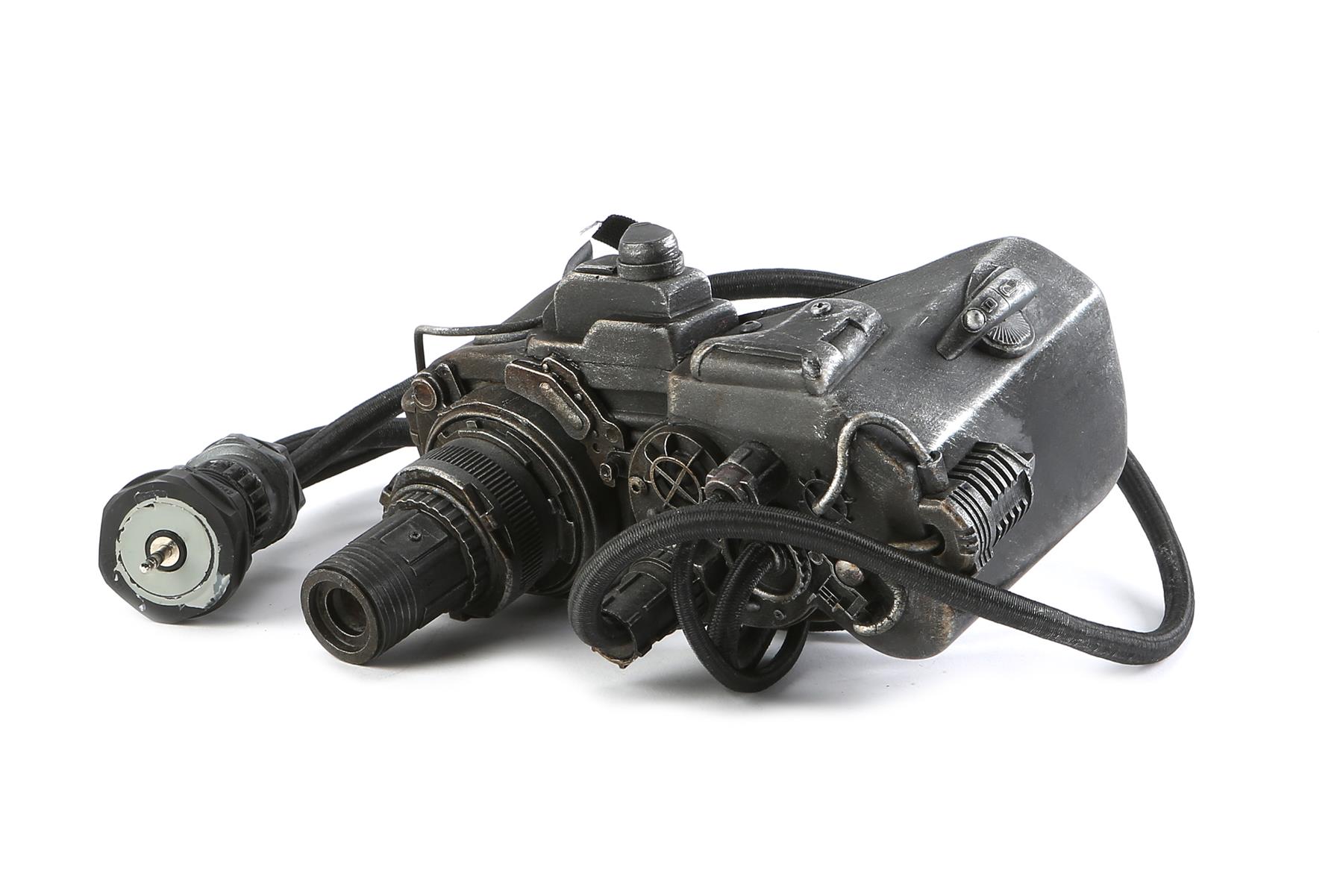 That same, dissembled aesthetic continues on the streets and in the markets, and even into the criminal population. Most forgo a complete physical overhaul, like Major, but opt for smaller, less intrusive gear, such as the masks made for yakuza members and data hosts. 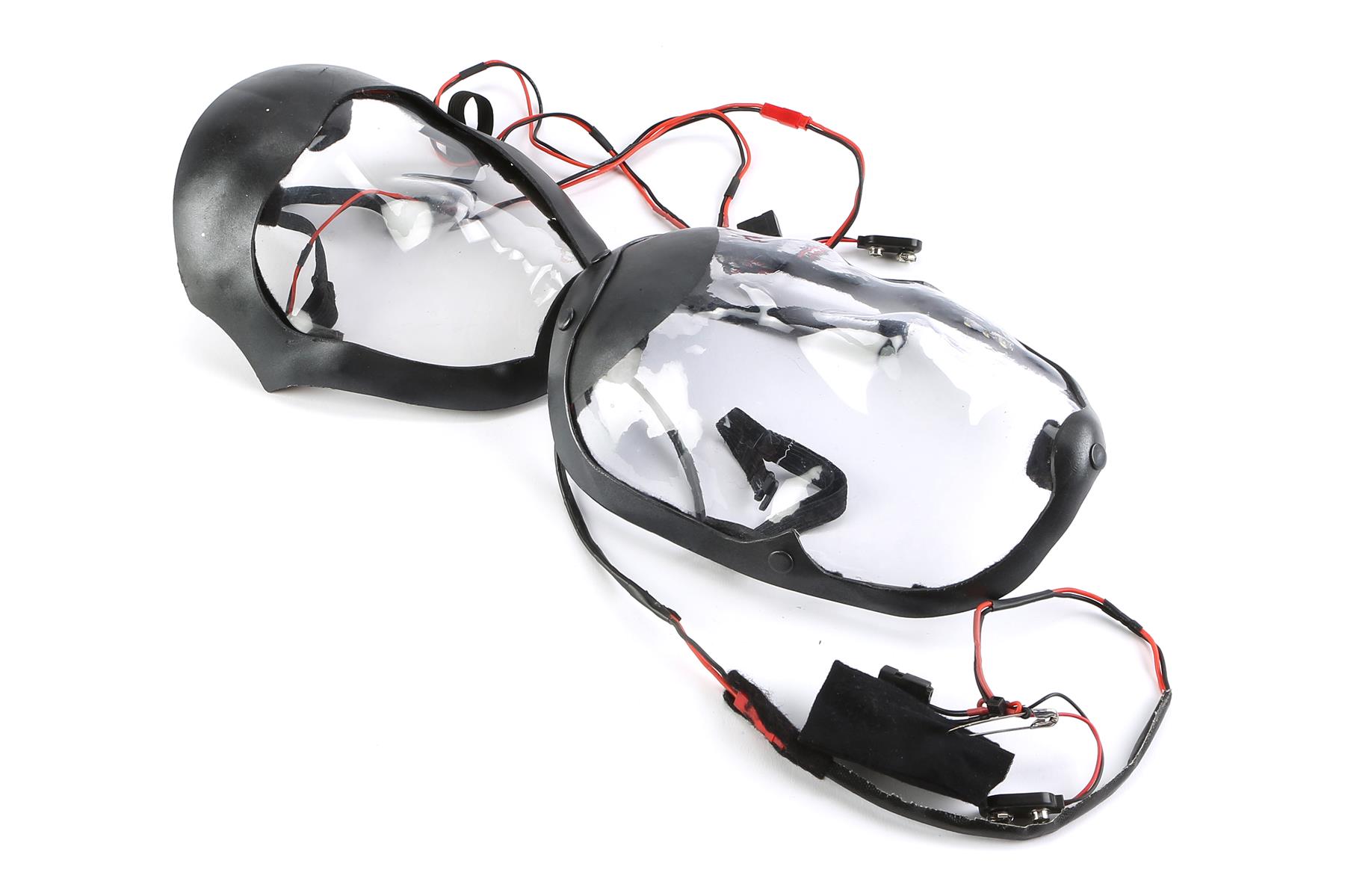 When the upper class and courtesans of the city need to take to the harsh streets, they often do so wearing clear face masks, presumably to preserve their complexion and control their air quality while exposed to the polluted environments. 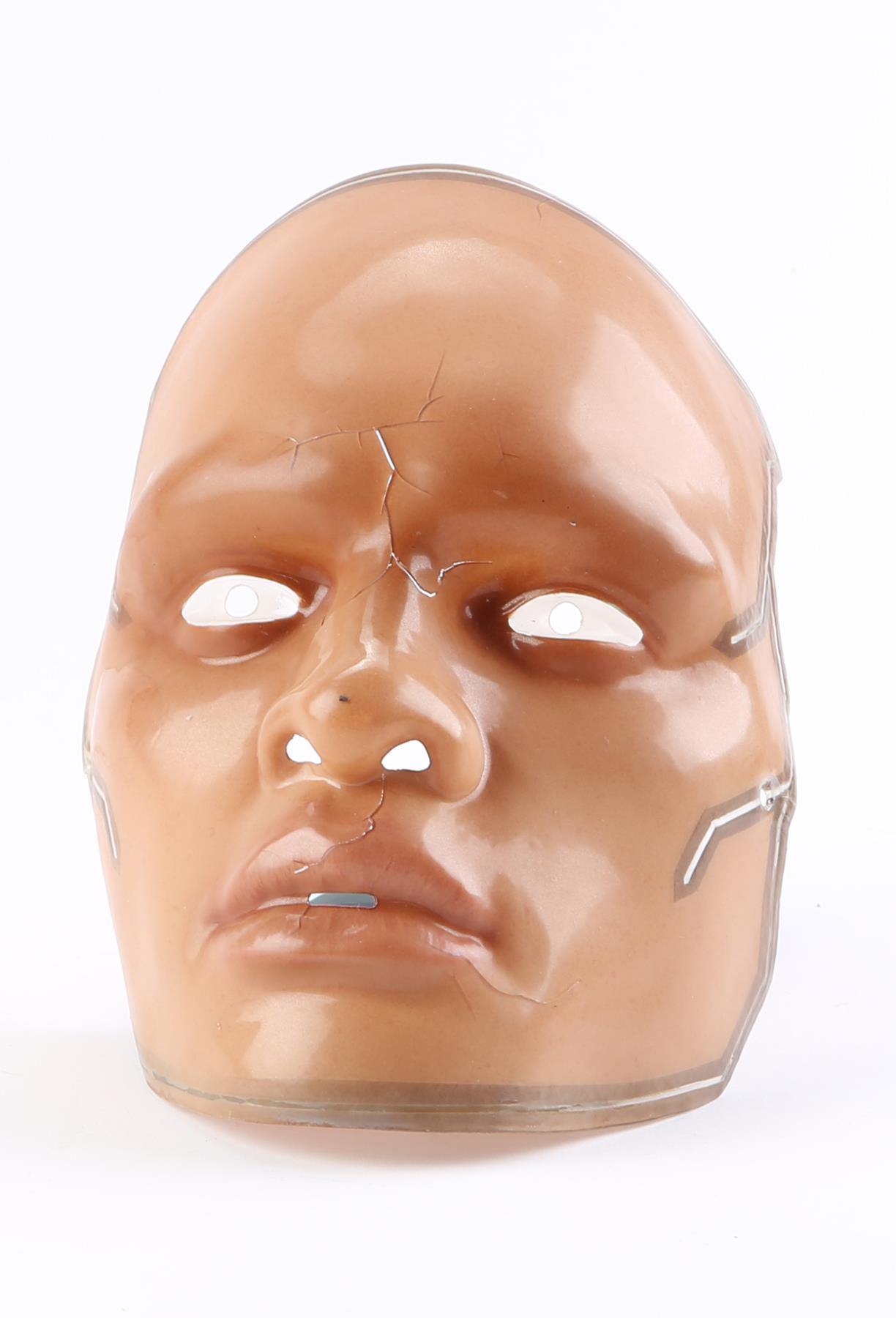 The world of Ghost in the Shell is never more frightening than when the line between human and machine is practically indistinguishable. While the robotic geishas from the opening of the film are clearly machines made to mimic human behavior, designs for characters like the Hanka security force beg the question of whether they are, or were, ever organic to begin with.

The technological enhancements on display in the world of the story paint a bizarre, fun-house mirror version of current society simply by advancing the technology while keeping the faults of people and society intact, leaving the audience to wonder if the future will include an off switch. 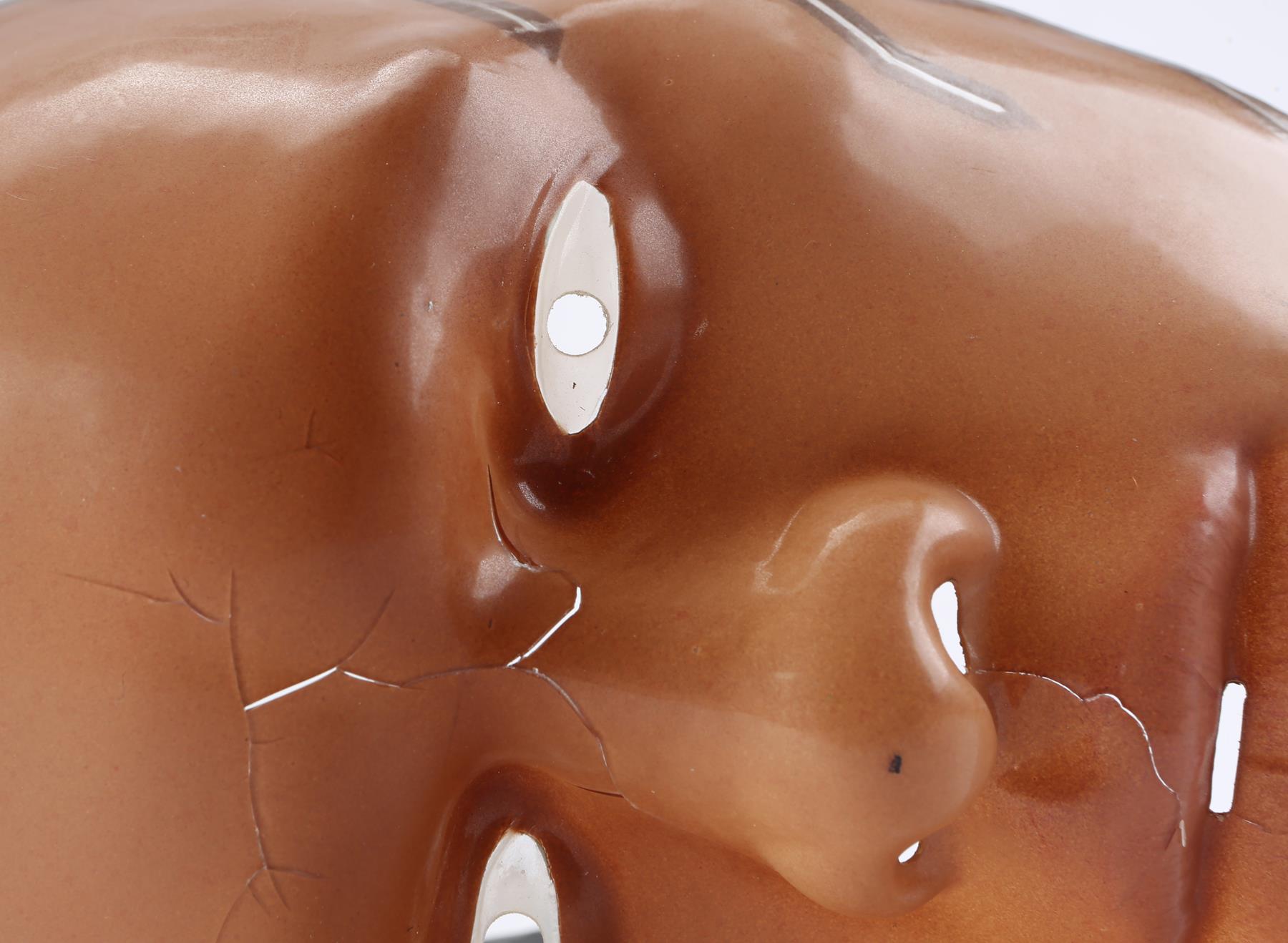 These lots and many more are featured in Propstore’s Ghost in the Shell Auction 2.0. Thank you for checking out our blog coverage and be sure to check out our other articles in this auction series!

Share
Related Articles
02.05.2018  |  Auctions ,  Uncategorized
The Near Future: Highlights from the Ghost in the Shell Auction
The world of Ghost in the Shell presents a future of almost total technological emersion. With holographic projections dancing on every building and cybernetic enhancements more common than haircuts, technology has seeped into every aspect of life in Major and Batou’s world, for better and worse…
24.04.2018  |  Auctions ,  Uncategorized
“This is Major”: Highlights from the Ghost in the Shell Auction
Major Mira Killian is one of Public Security Section 9’s best agents, and their secret weapon. Though most of the team is cybernetically enhanced, Major is lightyears beyond them, with an organic brain housed in a fully synthetic shell designed for the film by Weta Workshop. But while Major’s technological attributes make her a living […]
28.01.2019  |  Auctions
Gearing Up: Highlights from the Ghost in the Shell Auction 2.0
In a world of rampant technological advancements, it is often hard to keep perspective on how much the new devices effect our daily lives. Anyone with a smartphone has gone from relative anonymity to having a computer, and GPS, in their pocket practically all day long. But, advancements like the internet and smart phones were […]
20.05.2016  |  Collections
Propstore Collections Presents Ark Of The Covenant Ghost
Welcome to our continuing series of collections blogs as Propstore’s team digs into the archives and unearths some amazing items. We talk about the film, explore the history of the prop or costume and explain why we love it so much. In this entry, a terrifying guardian of an ancient relic that brings death to […]
Sign up to be in the know