Lord of the Apes: The Masterful Primate Designs of Rick Baker

We’ve already explored a number of Rick Baker’s incredible creations, but it’s possible that the creatures most synonymous with Baker’s career are the myriad apes and gorillas that he brought to life on screen.

In 1984, Baker dramatically changed the way that films featuring primates were made with his groundbreaking work on Greystoke: The Legend of Tarzan, Lord of the Apes. While the film may not be as popular as some of the ones we will be detailing below, it is arguably the most significant because it revolutionized the way actors could portray primates on screen with more realistic appearances and movements.

Lot 14. Knuckle Walker Ape Arm Extensions may not seem revolutionary at first glance, but they allowed actors to more comfortably and accurately mimic the walking of apes. With handles for the actor to clench on to and padding at the forearms and elbows, these arm extensions allowed actors to emulate the longer arms of apes. The latex hands are painted and textured to resemble ape skin and formed into a closed fist so the actors could simulate the “knuckle walking” motion of the apes. One of the arms is skinned up the forearm and finished with hand-tied hair while other is left exposed allowing for a clear view on the inside of the arm and an appreciation for the calculation that went into the design. 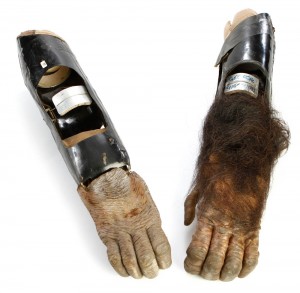 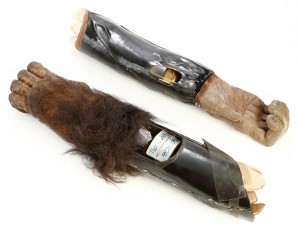 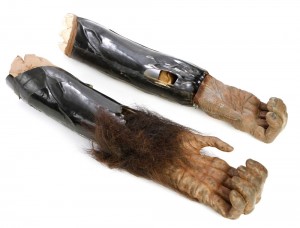 Of course, no matter how realistic the walking of the apes might look, an authentic ape suit is required in order for a realistic film. Lot 20. Complete Ape Display offers just this. The full display consists of hands, feet, muscle suit, and a mask. The hair suit is a nylon lining with real hand-tied yak fur for a realistic appearance. The hands and feet a textured latex painted to appear lifelike. The mask is a fiberglass underskull with a latex mask drawn over it with similar lifelike skin texture and coloring as well as incredibly detailed resin teeth. The entire costume has been assembled in a dynamic crouching pose by Tom Spina designs and is offered as a custom mannequin display. 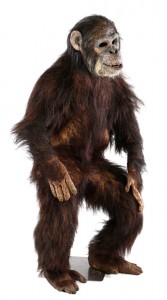 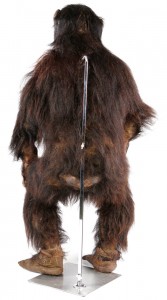 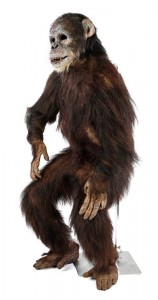 While the Knuckle Walker Arm Extensions used a subtle simplicity to simulate a complex movement, Lot 56. Simba R/C Head and Remote from Gorillas in the Mist demonstrates a more technological approach to simulating primate movement. Used in what is widely considered as Baker’s finest work on a gorilla film, Gorillas in the Mist, this R/C head is constructed of a fiberglass skull cap with interior foam padding for the comfort of the actor. With several servo-controlled face plates and wires, the remote control operator would have been able to articulate fine facial movements of the upper and lower lips, nose, brows and eyes. The R/C unit consists of four joysticks, eight dials and a switch all with labels indicating which facial movement they control. 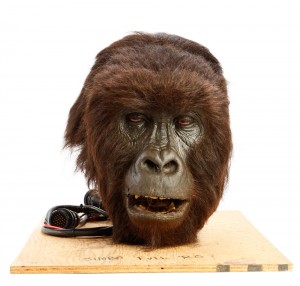 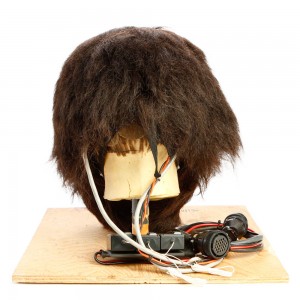 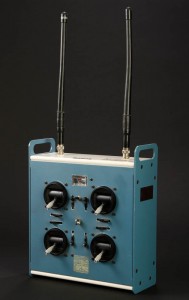 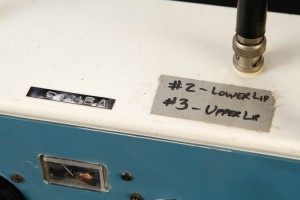 Lot 61 is a Complete Gorilla Costume Display portrayed by stunt actor Jody St. Michael. The components were assembled into a custom seated display by Tom Spina Designs. Check out the photos and video below for a closer look at this impressive costume display from Gorillas in the Mist. 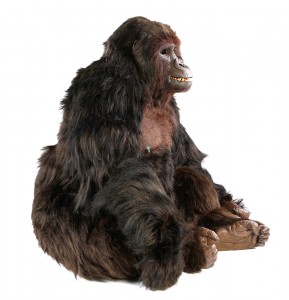 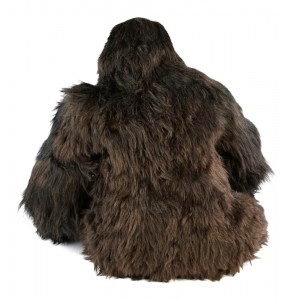 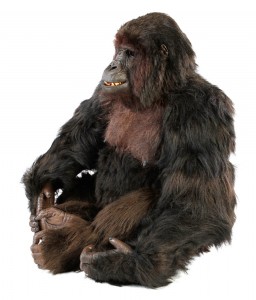 10 years after his work on Gorillas in the Mist, Baker undertook the mighty task of the gorillas effects work on the 1998 Disney remake Mighty Joe Young. Lot 237. Full-Size ‘Big Joe’ Head Skin, Chest, Arms and Hands consists of pieces created for scenes in which a full-size, practical Joe was called for. The chest was used in the scene following Joe’s heroic fall from the burning Ferris wheel near the end of the film and was built to be large enough for a puppeteer to sit inside of it. The arms are built at the same scale and measure approximately seven feet in length each. The head is also built to the same scale, and the lot makes for an impressive collection worthy of Mighty Joe himself.

While Baker’s work on Greystoke and Gorillas in the Mist is applauded for its realism, his work on the 2001 remake of Planet of the Apes has an inherently different and more imaginative take on the apes as they take on many humanistic attributes. Lot 306. Attar’s (Michael Clarke Duncan) Costume Helmet and Paint Test Head demonstrates this creative approach taken by Baker on the film as it shows the ape general dawning his military helmet. The helmet is made from fiberglass with detailed carving and textures and includes an adjustable leather chin strap with chainmail draped across the back to protect the neck. The mask is an incredibly detailed paint test permanently attached to a biscuit form lifecast of the late actor, Duncan. 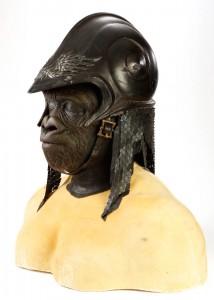 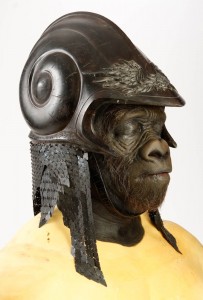 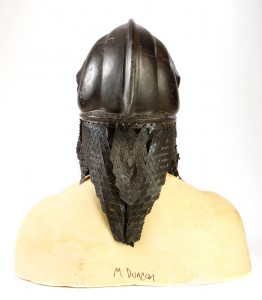 This is just a spotlight on some of the incredible Baker ape and gorilla designs featured in the Rick Baker: Monster Maker auction, but it demonstrates why he is unequivocally the lord of the apes. In our next installment in the Rick Baker blog series, we look at another animal inspired design that Baker is less renowned for, the bat. In the meantime, check out the full Rick Baker sale listing in the interactive catalog at www.propstore.com/rickbaker.