Welcome to the the newest of our Preview Blogs from the Propstore 2018 Entertainment Live Auction. During August and September, we will give you a weekly advance preview of some of the amazing and iconic lots that we have in store for you in this years auction… this week we’re looking at the evolution of the apes from the Planet Of The Apes film series!

Planet of the Apes is a remarkable movie franchise: a 50-year-old saga defined by its visual imagination, bold storytelling, social commentary and, most significantly, its astonishing technical achievements. So, with our Live Auction this year featuring some fantastic Apes artefacts — including masks and costumes from the ’68 original — the time is surely ripe to celebrate half-a-century of game-changing movie craft.

Getting the ape make-up right was utterly crucial to the success of the first-ever Planet of the Apes movie — a loose adaptation of a satirical sci-fi novel by French writer Pierre Boulle, which (spoiler alert) relocated the titular planet visited by harried astronaut George Taylor (Charlton Heston) to the Earth of the far future. The biggest worry was that audiences would find it comical if the ape characters couldn’t emote convincingly, or interact convincingly with the human characters. 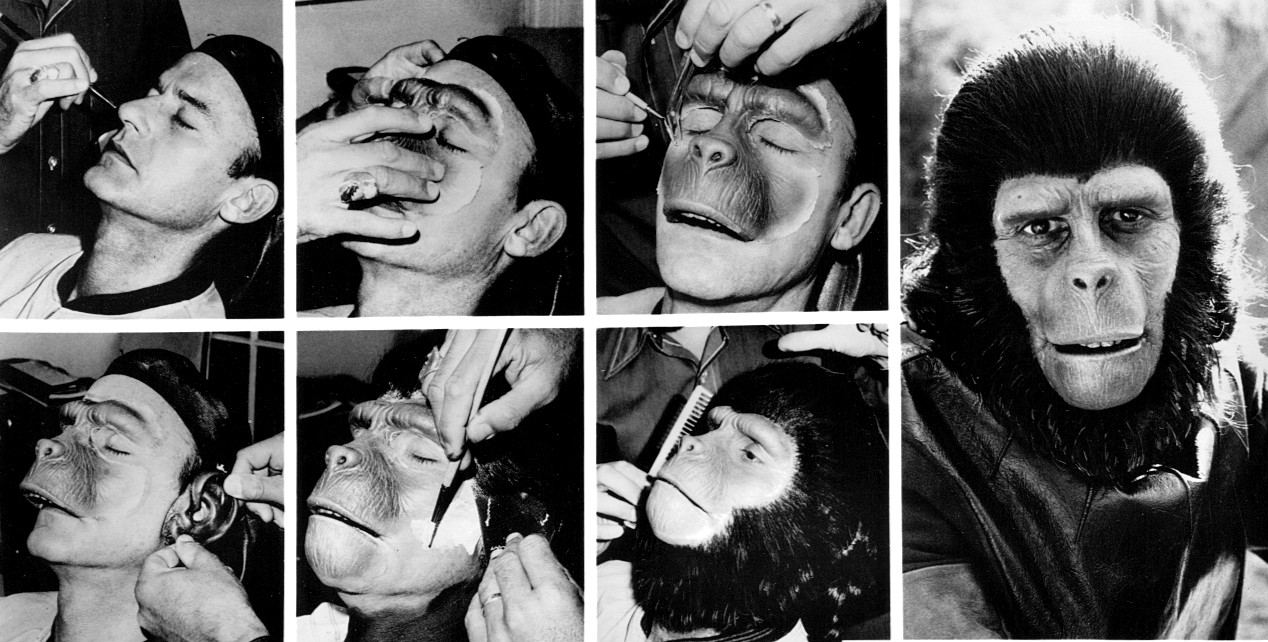 Although a $7,000 make-up test (starring Heston — with Edward G. Robinson playing antagonistic orangutan Dr. Zaius!) proved it could work, it wasn’t until John Chambers entered the picture that the Ape make-up really came together. An expert at creating prosthetic devices, he’d once made replacement limbs and facial features for wounded World War Two soldiers and famously designed Mr. Spock’s ears for Star Trek. Working with make-up artist Dan Striepeke, Chambers devised a way for the ape actors to have an animalistic appearance (which he described as “only very slightly beyond what you might call basic ape”) while being able to manipulate them convincingly as they moved their facial muscles and, crucially, talked.

This not only involved creating all the foam-rubber appliances (continuously, throughout the entire production, for dozens of performers) which allowed the skin to breathe, but also inventing an adhesive which meant the appliances could stick directly to skin without “irritating or clogging the pores,” as Chambers put it.

The result was a colossal achievement. “No movie had ever been made like this before,” recalled Striepeke earlier this year. “This was totally new ground.” The result, deservedly, earned Chambers an honorary Oscar — only the second-ever awarded for an achievement in make-up.

Tim Burton’s 2001 remake of Planet of the Apes quite rightly has its critics. But whatever you think of the story (which, set on another planet, is actually closer to Boulle’s original) or the casting of Mark Wahlberg in the Heston role, you can’t deny the astonishing artistry of the ape make-up, as designed by long-time ape enthusiast Rick Baker.

Having worked on the 1976 remake of King Kong, Greystoke: The Legend of Tarzan and Gorillas in the Mist, Baker certainly knew how to create convincingly realistic apes on screen. Of course, he “felt a lot of pressure”, as he said at the time, but was sure he could improve on late-’60s prosthetics, especially as his intention was to make each and every ape look like a distinctive individual, far beyond the three, samey types from the original series.

Baker undoubtedly pulled it off, coming up with some truly remarkable ape creations, each one as realistic as it was unique. “Rick Baker is a genius,” said Helena Bonham Carter (aka chimp Ari) during production. And who could disagree?

When the Planet of the Apes returned in 2011 with a prequel set in our own era, its film-makers (including British director Rupert Wyatt) faced a very different challenge to Tim Burton and the makers of the original. Their story, Rise of the Planet of the Apes, began before the chimps, gorillas and orangutans had evolved to speak, walk upright and wear armour. But using real, adult apes was not an option: too risky, too ethically dodgy.

Fortunately, visual-effects technology had come a long way, while the Lord of the Rings movies forged a whole new technical craft via the character of Gollum. Namely motion-capture, or performance-capture, through which actor Andy Serkis physically played the wretched creature, with his movements precisely transferred to a photo-real digital creation. So it made sense for human actors to play the apes in Rise, while the VFX studio behind Rings — Weta Digital — created photo-real digital apes. 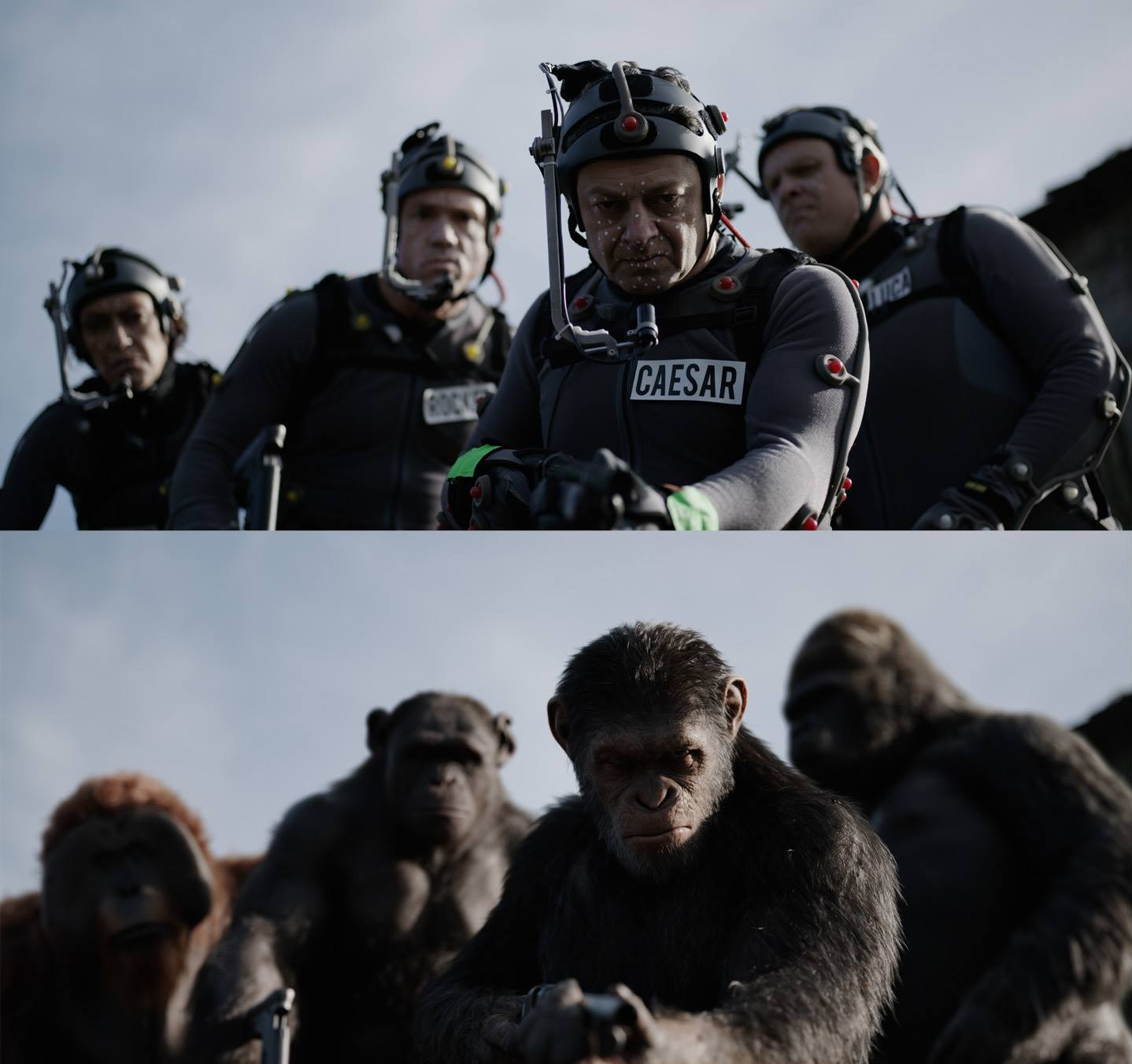 And it made even more sense for Serkis, the master of mo-cap (having also played the bestial title role in Rings director Peter Jackson’s King Kong remake) to play the lead role of revolutionary chimp Caesar. But Rise and its follow ups Dawn of the Planet of the Apes and last year’s War For the Planet of the Apes (both directed by Matt Reeves) went far beyond previous achievements in motion-capture, for the first time achieving it outside the confines of the mo-cap set (or ‘volume’), on both live-action stages and even on location, deep in the rain-lashed forests of Canada.

The apes of these films — Caesar foremost among them — are utterly convincing, both as visual realisations and also as performances. The visual effects (overseen by Weta’s Joe Leterri and Dan Lemon) were rightly nominated for Oscars. But the time has yet to come for actors playing digital characters to receive the recognition they deserve. Planet of the Apes remains, in many ways, ahead of its time.


Don’t forget to keep watching these weekly ‘sneak peek’ blogs, showcasing some fantastic props from this year’s Entertainment Live Auction 2018. Follow us on Twitter & Facebook to be the first to know about all current & upcoming Propstore Auctions and more!

Share
Related Articles
07.05.2015  |  Auctions
Lord of the Apes: The Masterful Primate Designs of Rick Baker
We’ve already explored a number of Rick Baker’s incredible creations, but it’s possible that the creatures most synonymous with Baker’s career are the myriad apes and gorillas that he brought to life on screen.
29.10.2015  |  Auctions
Baker’s Animal Creations
In our last blog, we looked at some of the classic Halloween monsters that the Monster Maker is famous for, but this week our focus turns to some of the more natural creations from Baker’s career.  Without question, bringing living animals to life with actors, puppets, masks and make-up is an incredible challenge, and Baker’s […]
04.09.2018  |  Auctions
5 Reasons Why Han Solo Is The Greatest Star Wars Character
Welcome to the newest of our Preview Blogs from the Propstore 2018 Entertainment Live Auction. During August and September, we will give you a weekly advance preview of some of the amazing and iconic lots that we have in store for you in this years auction… this week we’re looking at 5 Reasons Why Han Solo Is The […]
24.07.2020  |  Collections ,  Live Auction- Los Angeles 2020
NOSTROMO: A Legend Born, And Born Again l Entertainment Memorabilia Live Auction – Los Angeles 2020
The cover piece for our first ever Los Angeles-based Entertainment Memorabilia Live Auction is the 11-foot long filming miniature of the Nostromo from Ridley Scott’s horror classic, Alien. This artifact has been a part of Propstore’s company collection for over a decade, but wasn’t always in the camera-ready shape you see it in now. Read […]
Sign up to be in the know