Unlike the armored militarism of many of the male gods, the female deities of Gods of Egypt show their power more subtly, incorporating symbols of their might into the fine dresses, crowns, and other ornamental pieces they wear. Naturally, this makes many of the goddess costumes some of the most visually arresting lots in the auction.

The Goddess of Love always dressed to impress. Even if only to greet Horus on the morning of his coronation, Hathor enters the would-be-king’s bedroom in an ornately sequined dress, complete with an intricate bead design throughout the top and a bronze, fishtailing sequin effect along the skirt. 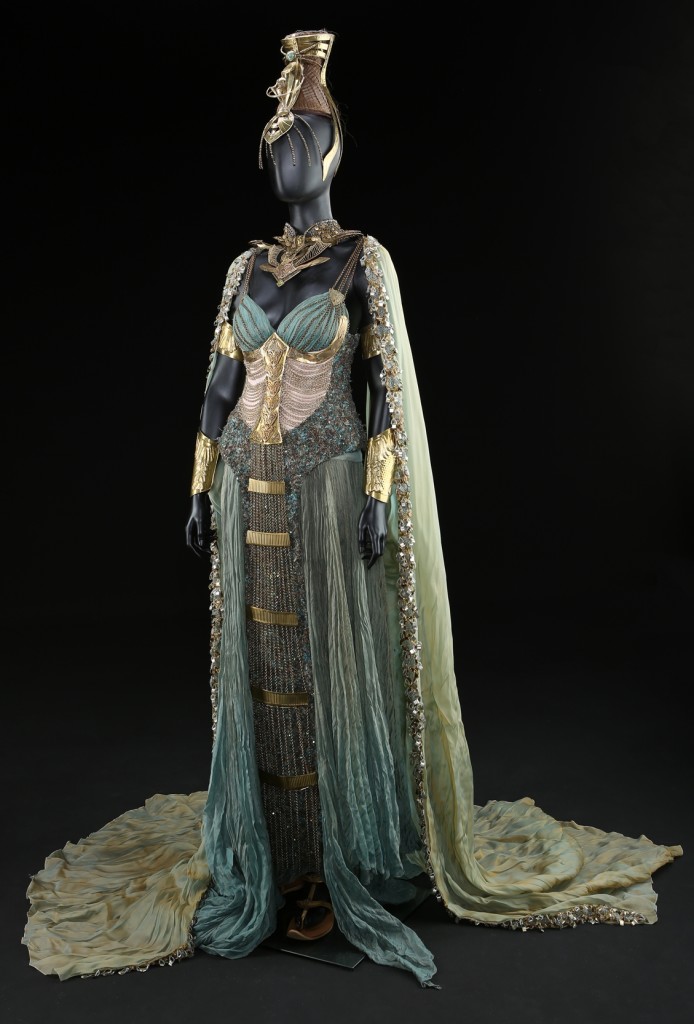 For Horus’s coronation ceremony, the Goddess of Protection made a regal entrance in her green and gold gown. Along with a detailed dress is a flowing green cape, meant to represent the wings Nephthys sports in her divine form. Completing the outfit is an intricate headdress and gold accent jewelry throughout. 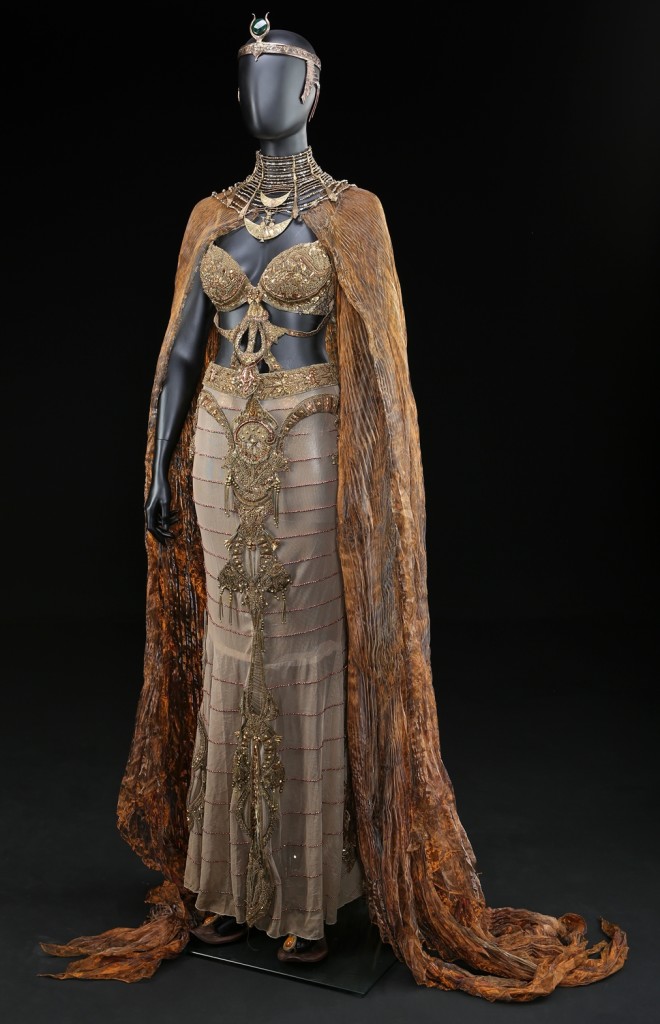 After Egypt fell under Set’s rule, Hathor acted as the mad king’s ally and lover until she left to help Horus win the throne for himself. Her clothing was noticeably more muted during these scenes, with the bright blues and reds of her previous costumes replaced with earth tones for her invasion dress. Hathor’s organza cape is worn under an intricate necklace piece and is tapered at the ends to look frayed. Additional jewelry and a headdress complete the lot. 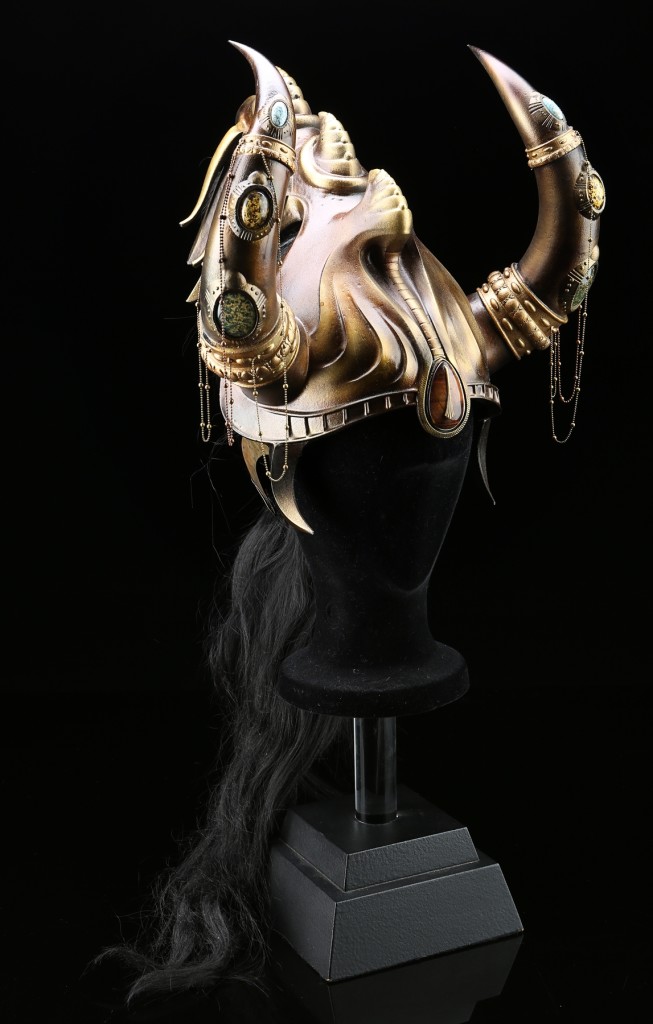 To find and stop his nephew from taking back the throne, King Set sent Astarte and Anat after Horus and Bek. Armed to the hilt, atop her giant sand snake, Astarte is made only more threatening by her imposing helmet. The helmet’s design is in keeping with design incorporated into other costumes, though the addition of horns to this piece gives it a vaguely Norse-like look as well. A pony tail of jet black hair hangs neatly from the back of the piece. A series of inset stones and delicate chain ornaments complete the helmet’s threatening-but-feminine look. 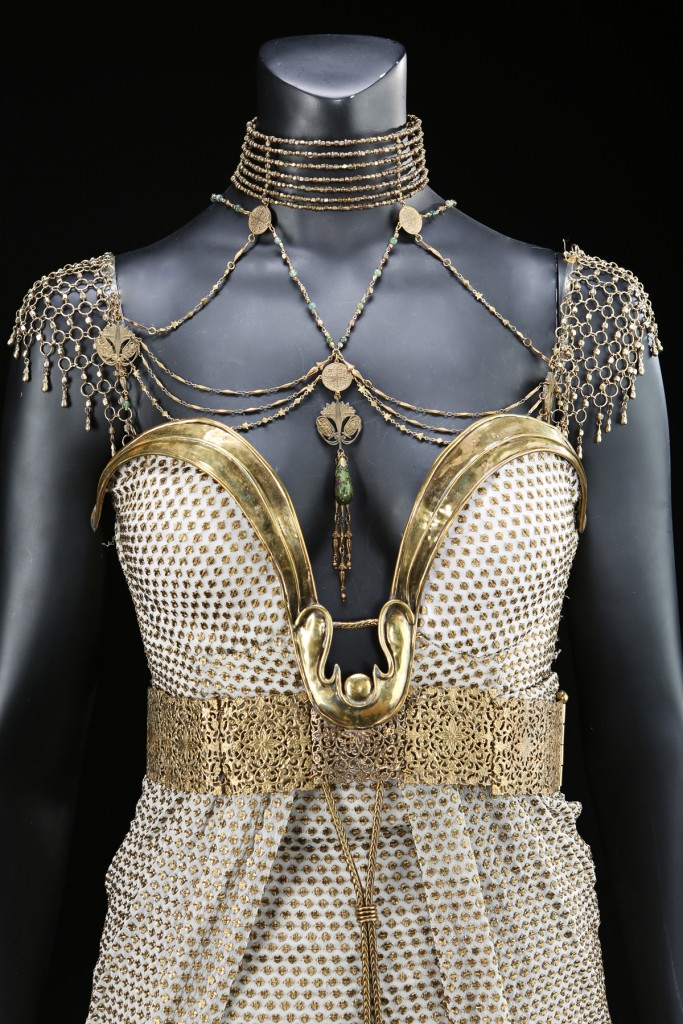 Zaya attends two coronation ceremonies in the film, while being enslaved, killed, sent to the underworld, and rescued in between the events. So when it came time for Horus to finally take the throne, Zaya attended in style. The white dress features gold polka dots throughout. Custom gold-toned pieces line the top of the dress, with still more beads and designs connecting to a delicate collar and shoulder straps. The matching bracelets and earrings are also included.

Share
Related Articles
23.01.2018  |  Auctions
Gods Of Egypt Auction… Walking With Gods
In the world of Gods of Egypt, the pantheon of gods lived among their creations as deities and rulers. Despite their true, almighty forms, the gods take human form among their lesser creations, showing their power and status through clothing and armor rather than wings and claws. Take a look now at some of the […]
10.01.2018  |  Auctions
Gods Of Egypt Auction… Defending Egypt
When gods walk among their followers, danger follows close behind. Despite their almighty powers, the deities in Gods of Egypt feud like any royal family in an effort to rule Egypt as they see fit. Take a look now at some of the stand-out armor, prop weapons, and more from the Gods of Egypt Auction and […]
22.05.2018  |  Auctions ,  Uncategorized
From the Throne: Highlights from the Warcraft Auction
As king of Stormwind, King Llane is known throughout Azeroth as a thoughtful, selfless leader. But despite his level-headed demeanor, the opulence and excess of royal life is not lost on him or the people of Stormwind, who have created incredible pieces for the King and royal family over the ages.
04.06.2015  |  Collections
Heroic Helmets From the Propstore Archive
From deep space, to ancient battlefields, where would a self-respecting hero be without a helmet? Hold onto your hats, movie fans, as we take a closer look at some of the heroic helmets from cinematic history, fresh from the Propstore archive. No matter what you’re into, these big screen helmets will definitely turn your head…
Sign up to be in the know