When gods walk among their followers, danger follows close behind. Despite their almighty powers, the deities in Gods of Egypt feud like any royal family in an effort to rule Egypt as they see fit. Take a look now at some of the stand-out armor, prop weapons, and more from the Gods of Egypt Auction and see which god deserves your devotion… 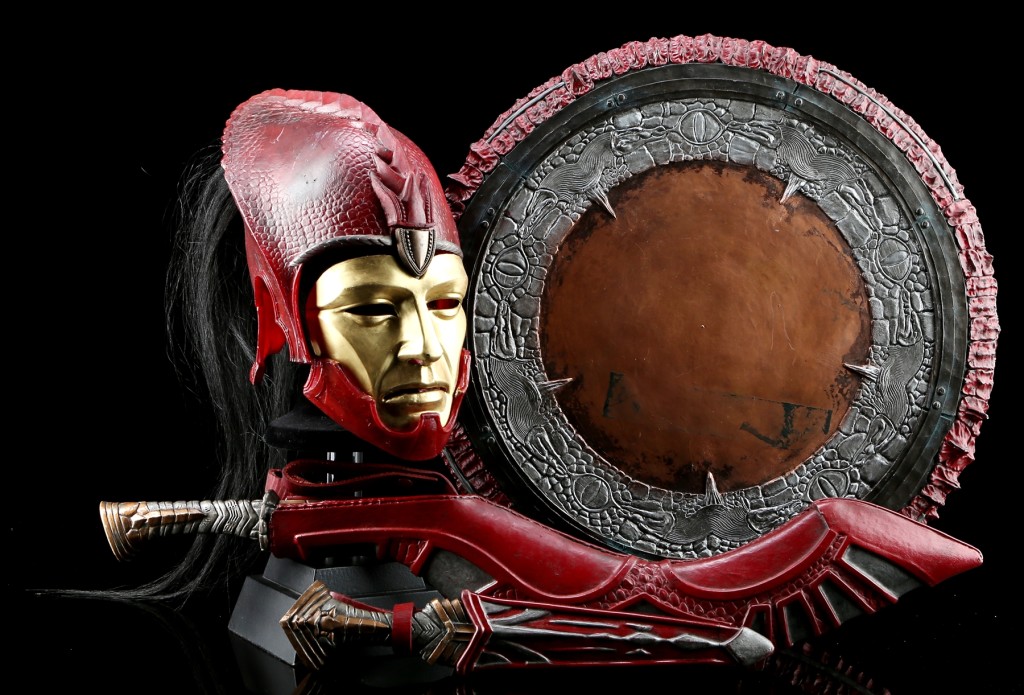 Straight off of a soldier in Set’s army, this lot includes an armored helmet, shield, prop sword, prop dagger, and scabbards for both. The red, scaled helmet boasts a gold-tone face mask and a tail of faux black hair flowing from the crown. The large shield continues the scale aesthetic, with reptilian teeth and eyes incorporated into the design of the leather. The khopesh-style prop sword and small prop dagger share a patina gold look and similarly designed scabbards. 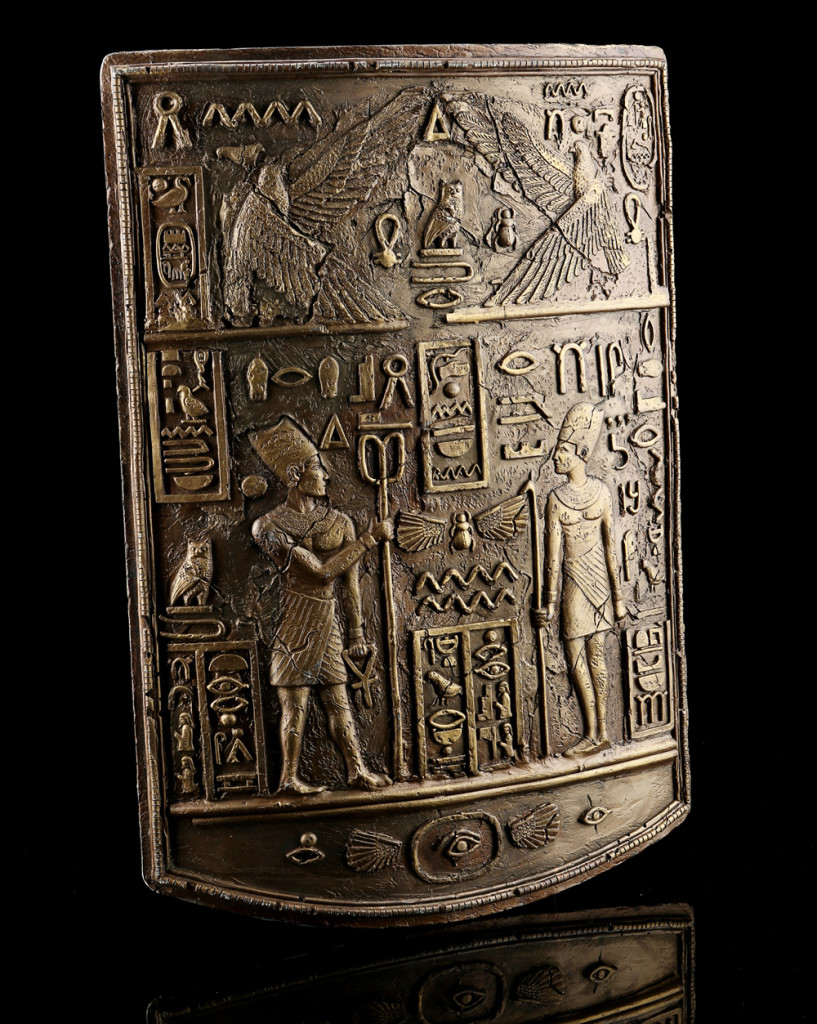 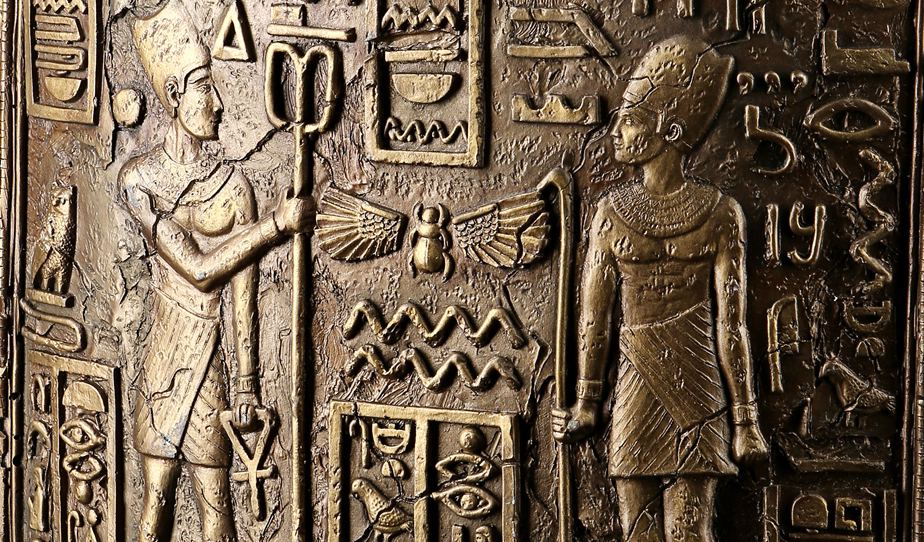 When Set attacked Nephthys’s tower, he was met with resistance by a small band of gods who were loyal to the Goddess of Protection and stood their ground to defend her. One of these unnamed gods carried a shield covered in ancient hieroglyphs and symbols. The resin shield was designed to appear well-used, with cracks and other small, purposeful injuries sculpted into the front-facing side. The piece is finished with faded gold tones. 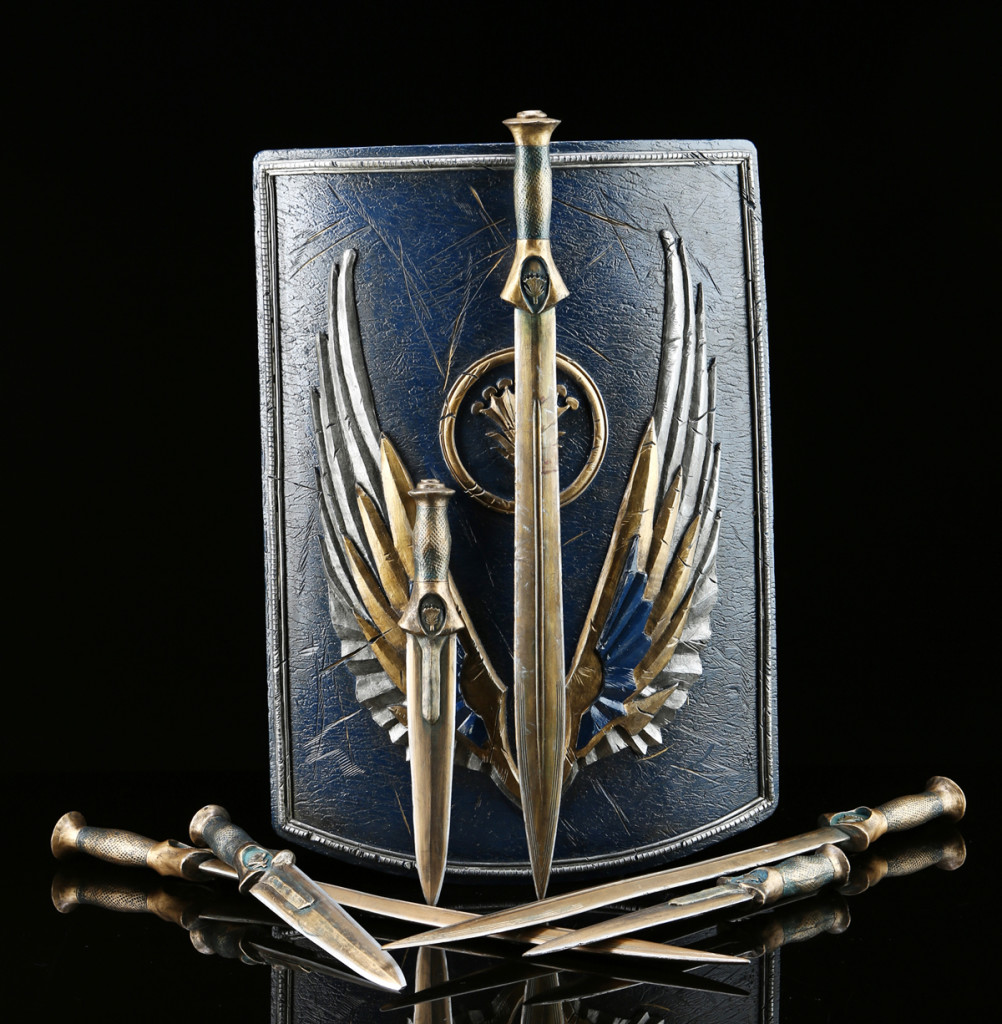 Along with the allied gods, Nephthys was also protected by her army of loyal soldiers when Set attacked. These soldiers were equipped with shields, swords, and daggers, all of which incorporated the Goddess of Protection’s wing motif. Uniformly designed, all items in this lot are painted in blue and gold tones. 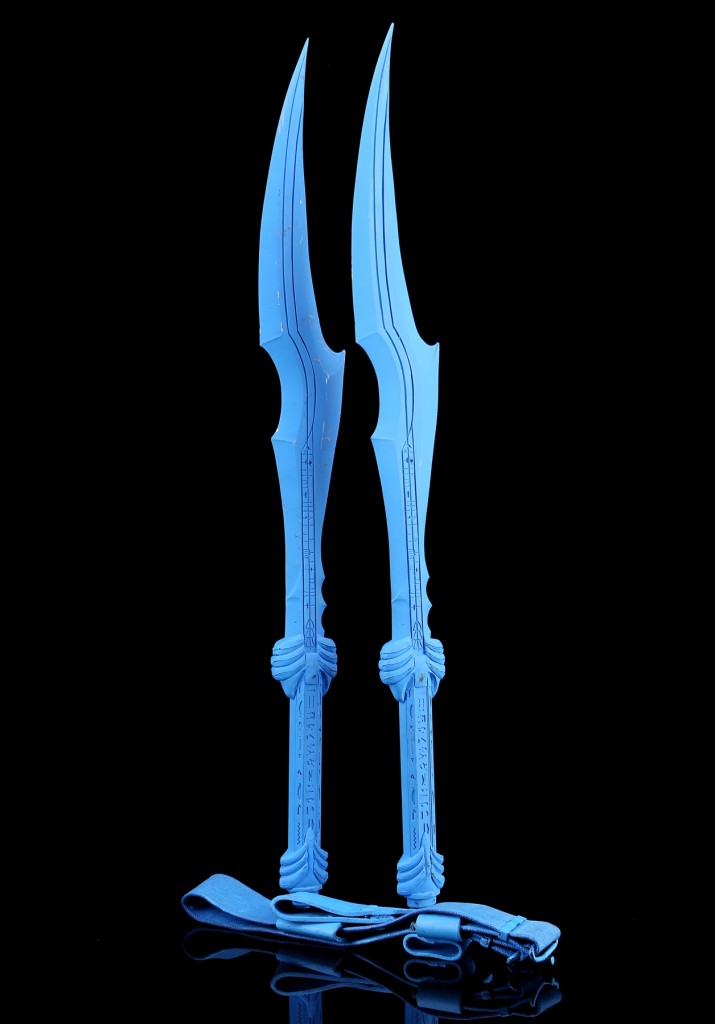 Though many of the gods choose to resemble a human form through much of the film, the bull god Mnevis shows his true visage when engaged in battle. For this reason, VFX versions of his swords were created for use by stunt performers while shooting complicated battle sequences. The resin prop swords are cast from detailed molds and show the various hieroglyphs and design elements incorporated into the pieces’ sculpt. Both of the swords and the accompanying belt have been painted with a bold blue to make the objects easier for animators to replace with computer generated versions for the finished sequence. 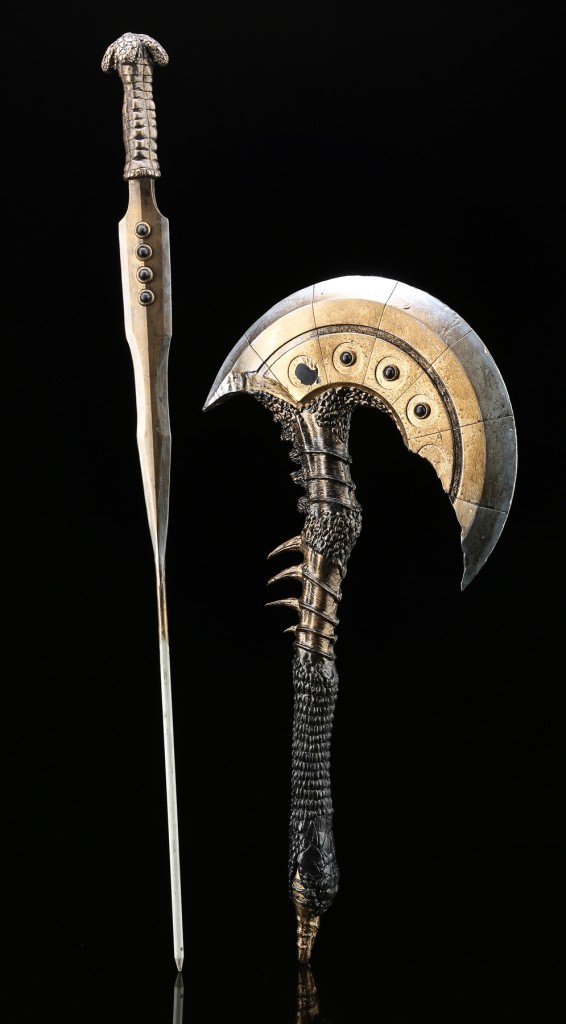 To hunt down his nephew Horus, Set sent goddesses Anat and Astarte to handle the problem personally. Atop her giant sand snake, Astarte is a formidable foe, especially when wielding her dagger and war-axe. These prop weapons are a design departure from other props created for the film, where the quasi-futuristism of the gods has been corrupted by more reptilian, monstrous features. The pieces are fully painted in shades of black and gold.

Share
Related Articles
23.01.2018  |  Auctions
Gods Of Egypt Auction… Walking With Gods
In the world of Gods of Egypt, the pantheon of gods lived among their creations as deities and rulers. Despite their true, almighty forms, the gods take human form among their lesser creations, showing their power and status through clothing and armor rather than wings and claws. Take a look now at some of the […]
16.01.2018  |  Auctions
Gods Of Egypt Auction… Women Of The Nile
Unlike the armored militarism of many of the male gods, the female deities of Gods of Egypt show their power more subtly, incorporating symbols of their might into the fine dresses, crowns, and other ornamental pieces they wear. Naturally, this makes many of the goddess costumes some of the most visually arresting lots in the […]
20.08.2015  |  Auctions
5 Weapons from The Lord of the Rings you can Actually Own!
Register at the Propstore website to place your bid on one of these five original pieces of The Lord of the Rings movie memorabilia.
20.09.2016  |  Auctions
Propstore Live Auction 2016 Presents… Swords
In this week’s Propstore Live Auction preview, we’ll be focusing on famous Swords from the archives of movie history…
Sign up to be in the know