In this week’s Prop Store Live Auction preview, we’ll be focusing on famous Swords from the archives of movie history…

With only one week to go, welcome to the latest blog feature preview where we’ll be looking at some of the amazing Swords that we have up for offer in the upcoming Prop Store Live Auction.

Check out some of the Sword lots included in the auction below, which include some particularly iconic items such as Mel Gibson’s claymore from Braveheart, Sean Connery’s magical sword from Highlander and other famous weapons from films as diverse as The Last Samurai, Les Miserables, The Goonies and the recent Edge of Tomorrow. 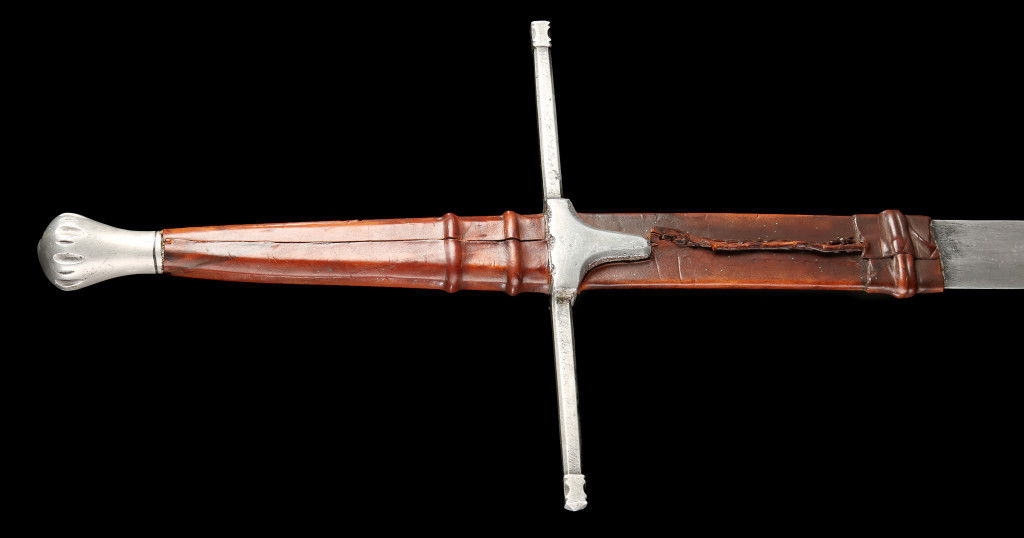 In the Oscar winning movie Braveheart Mel Gibson’s played one of Scotland’s greatest heroic characters, William Wallace, a Scottish knight who led his countrymen in battle against the English in the wars of independence in the late 13th/early 14th century.

Wallace’s long-sword (called a Claymore) is wielded by him in numerous battle scenes throughout the film, and appears in many film posters. Several versions of the signature claymore were made for production (including fighting, stunt and SFX versions). The impressive weapon for sale is crafted in aluminium with a wide cross guard, a rounded pommel, and features a leather wrapped grip and blade shoulder. It is a truly special collector’s piece. 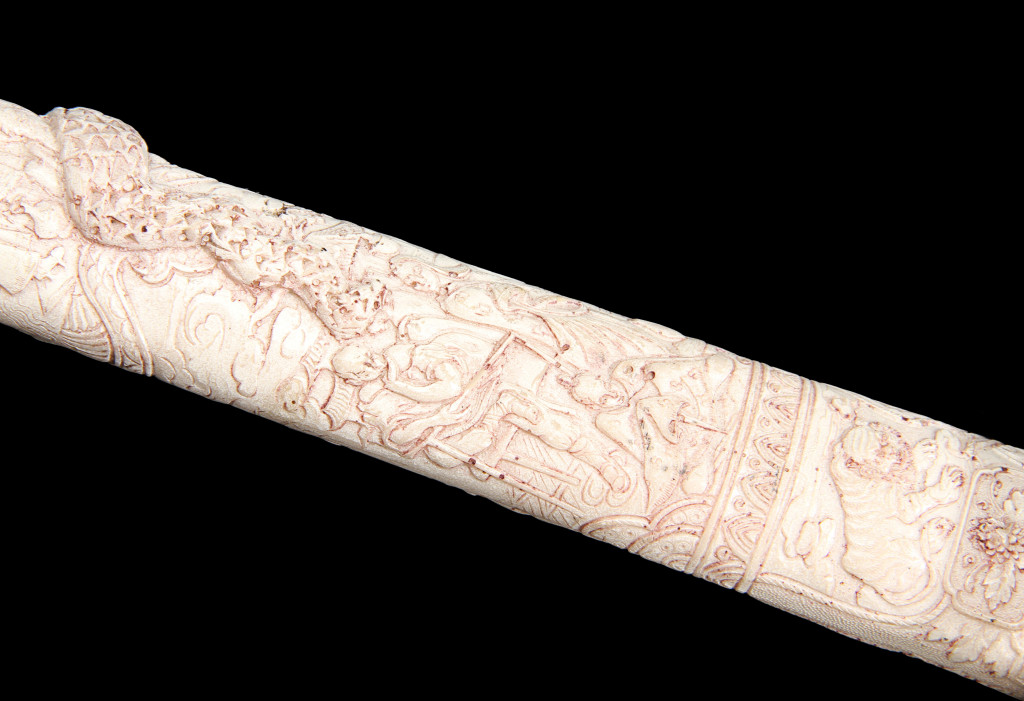 The mysterious weapon was passed to MacLeod after the death of his mentor, and became his signature weapon throughout the ages. This hero sword was custom made for production with an aluminium blade, a red leather-covered scabbard and a striking cast iron grip featuring Japanese dragons, lions and samurai in a faux-ivory finish. A lobby card used in the promotion of the movie is also included in the sale. 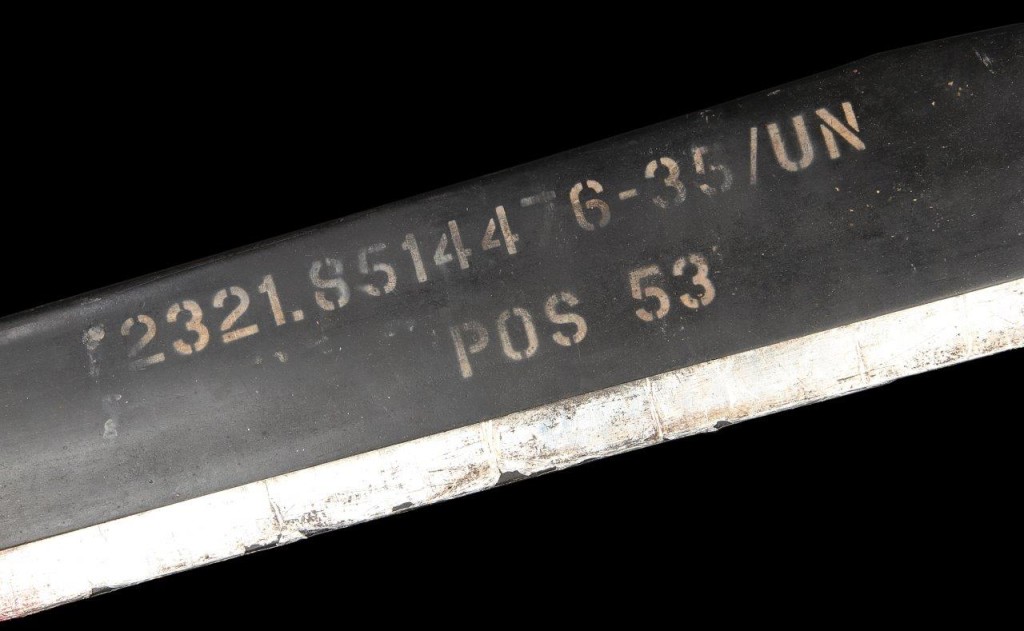 This weapon is a very contemporary piece wielded by Emily Blunt’s character, Rita Vrataski, in the recent sci-fi action epic Edge of Tomorrow. Her unique weapon of choice is in the shape of a helicopter rotor blade. She used it on Tom Cruise’s first day on the battlefield at Verdun, and her role in the victory there gained her the name ‘Angel of Verdun’ and a role as poster girl for the war (during which she was often pictured with the sword).

The sword is cast from dense polyurethane to be light enough for easy use the actor, and it is painted black with foil edges to ensure that it has an authentic ‘sharpened metal’ look. Its (fictional) origins are displayed in the sticker near the hilt with information about the vehicle it came from, and the black electrical tape wrapping the hilt. 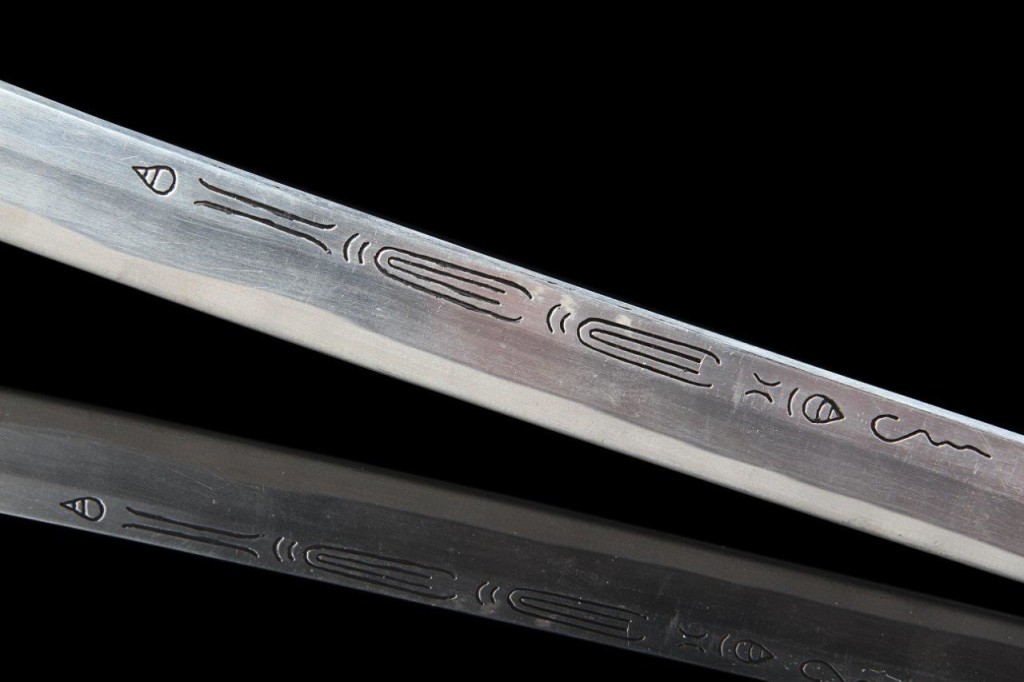 This hero Katana (Japanese samurai sword) was used by Ken Watanabe’s character Katsumoto in the historical war epic The Last Samurai. Katsumoto used his sword in battle throughout the film, first against Tom Cruise’s American character, and later alongside him.

The Katana is aluminium, with an array of engraved symbols on the blade, and a resin grip finished in monochrome with gold accents. It is held in a black resin scabbard, bound in black and white rope. It is a very distinctive piece for any fans of The Last Samurai. 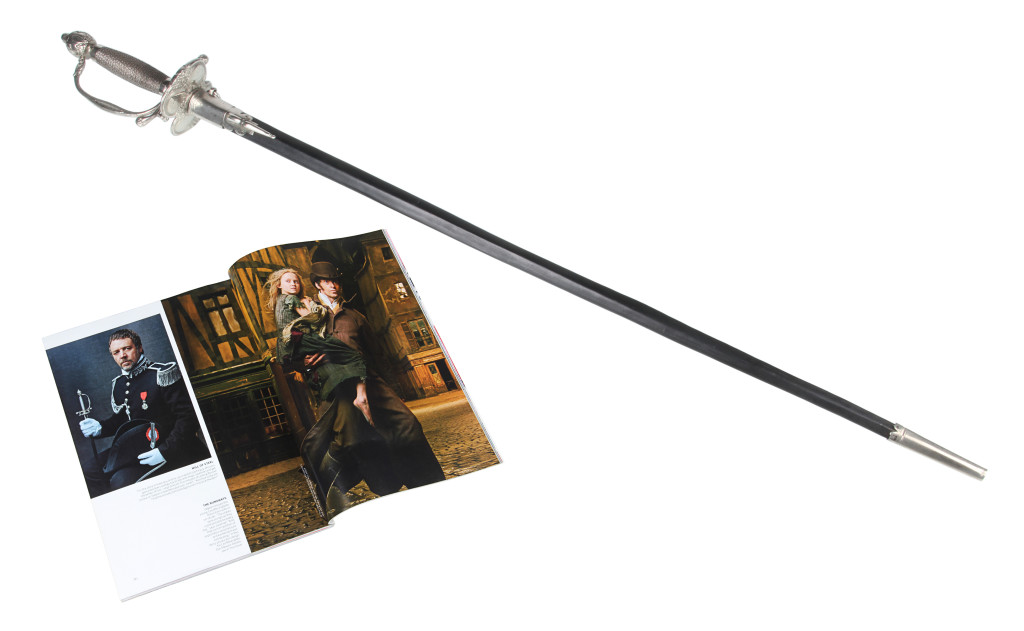 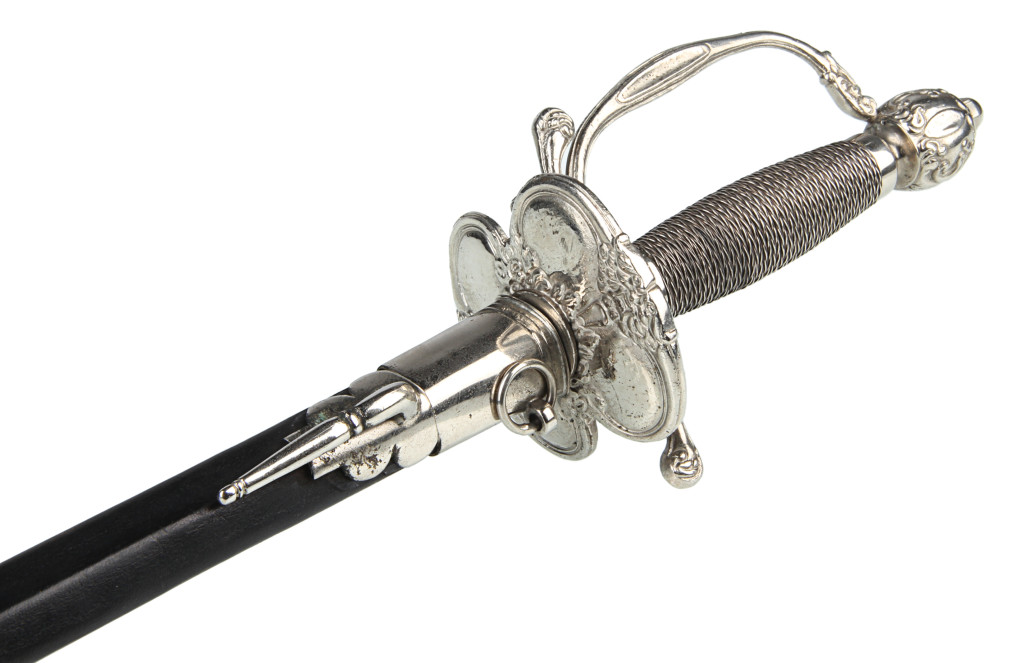 Inspector Javert’s (Russell Crowe) weapon of choice in the film of Les Miserables was a rapier (fencing foil), and is seen throughout his scenes at his side as he hunts Jean Valjean (Hugh Jackman).

The triangular lightweight aluminium blade has a floral pattern on the pommel and guard, with a scabbard in black leather capping each end. The sword includes a copy of the December 2012 Vogue magazine featuring Javert, pictured with his sword, as part of an article on Les Miserables. 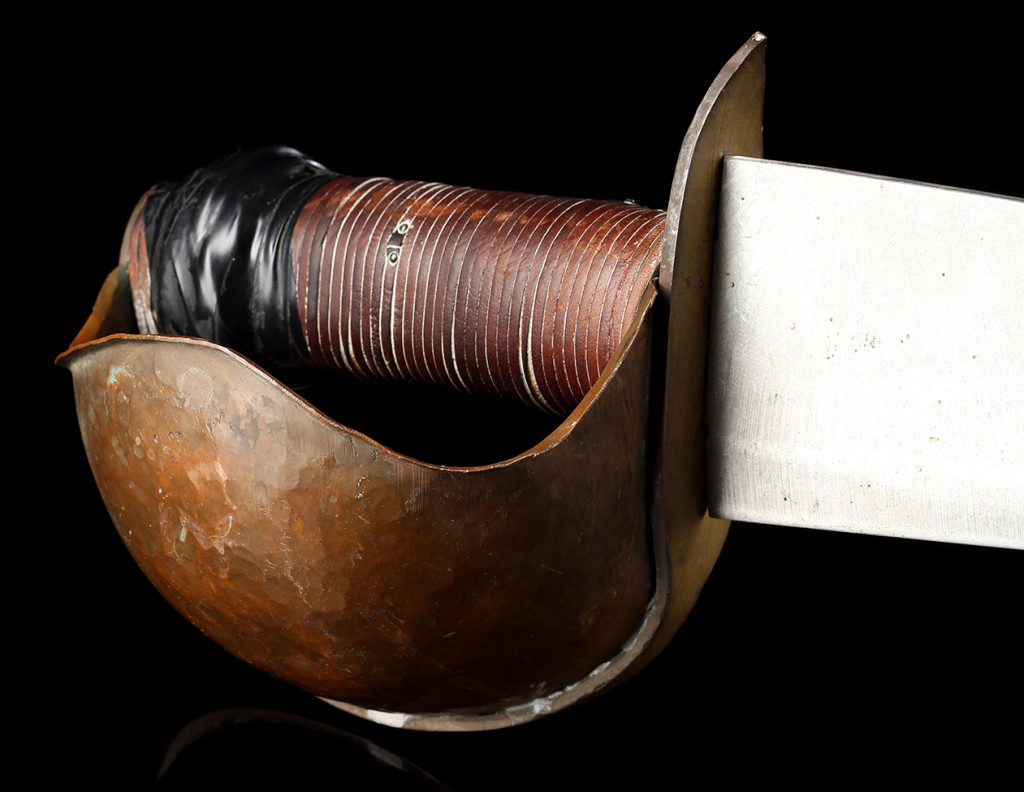 Memorabilia from Richard Donner’s much-loved adventure movie, The Goonies, is particularly rare, so we are delighted to offer One-Eyed Willy’s cutlass in the forthcoming auction. This particular sword was used in an unrealised sequence in which Sloth duelled with Jake Fratelli (Robert Davi). The sword features a curved aluminium blade with numerous dents from combat use with a leather cord-wrapped grip. This item includes a behind-the-scenes photograph showing the sword in use during that fight rehearsal. 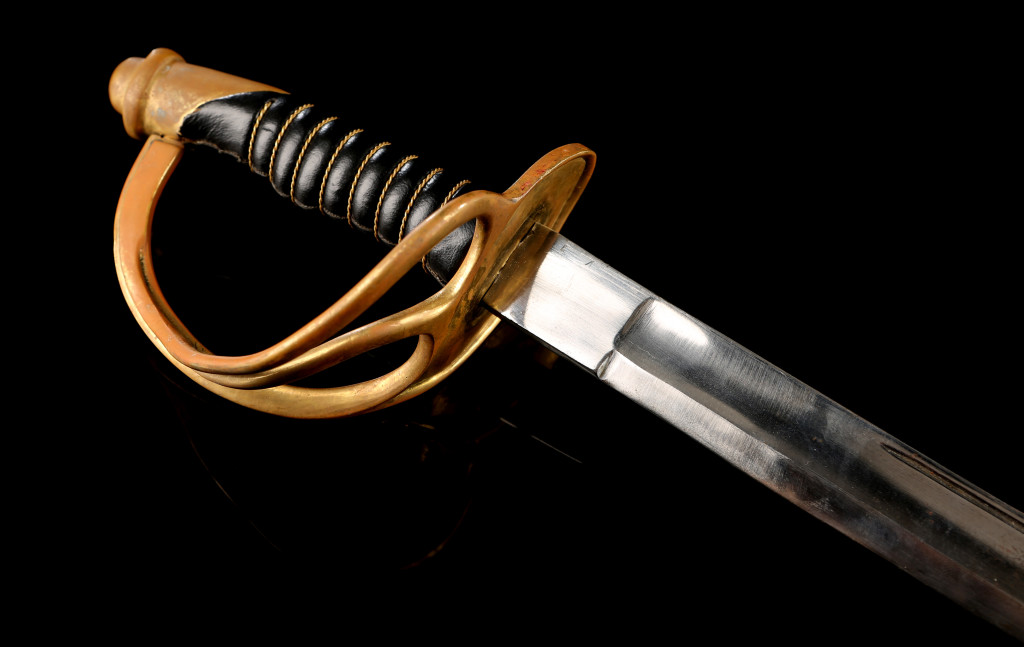 Tom Cruise played the American Nathan Algren in Edwin Zwick’s war epic The Last Samurai. His cavalry sword is used in battle against the samurai until he is captured by Katsumoto (Ken Watanabe).

This powerful sword has a slightly curved dulled steel blade, with a handle wrapped in black leather and gold wire, and a winding brass guard. Included is a steel scabbard with two rings to allow it to be attached to a belt. This piece would make an amazing pairing for any The Last Samurai fan, with Katsumoto’s (Ken Watanabe) Hero Katana, above.

All of these amazing and unique film Swords will be available in the upcoming Prop Store Entertainment Memorabilia Live Auction, so Register Now to make sure you are kept up to date will all the latest auction information and more! And don’t forget to check back at the Prop Store Blog every Monday and Friday leading up to the Live Auction to get more exclusive sneak peeks of what’s to come in one of Europe’s largest and most exciting film and TV memorabilia auctions.