Ever fancied yourself as a well-armed Elven warrior? Or perhaps you’d prefer to take a trip to the dark side as a twisted, snarling Orc? In our latest blog post, we take a look at five of the incredible, original weapons used in the production of the all action trilogy, The Lord Of The Rings.

For your chance to own one of these incredible pieces of movie memorabilia, simply register for the live auction to place your bid in person, online or by telephone on the 23rd September 2015.

Here’s a snapshot of the five Middle-Earth weapons you can actually own! 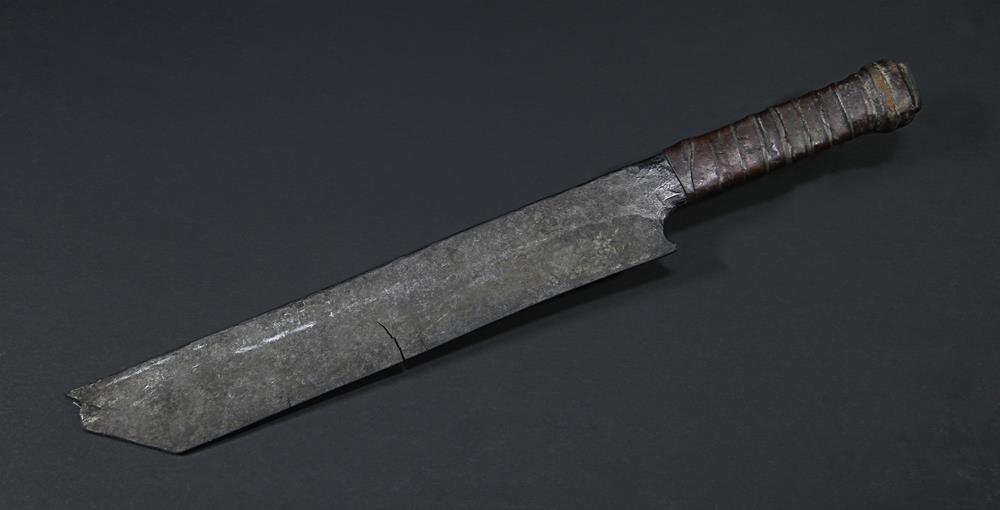 The collectors and LOTR fanatics amongst you will probably recognise this short-sword as one of the savage tools of the Uruk-hai, the powerful race of Orc-men that rampaged their way through Middle Earth in search of the Fellowship and the One Ring.

This sword is made from hard rubber, with a metal armature for strength and rigidity and a worn brown leather handle. It is distressed to look battle-worn, with mud applied to the handle and blade for Middle Earth authenticity. The tip of the sword is broken and there are some cracks in the blade from use in the film’s battle scenes. Despite this, the Uruk-hai stunt sword remains in good production-used condition.

The Witch King’s Dagger from Peter Jackson’s epic fantasy adventure featured in the pivotal scene where Frodo and the hobbits are ambushed on the hill at Weathertop by the Nazgûl. This scene is the first time Frodo uses the One Ring, but he is stabbed by the Witch King, whose cursed Morgul dagger poisons the young hobbit.

This extremely rare piece will definitely pique the interest of LOTR memorabilia collectors. Constructed by the world-renowned Weta Workshop, the dagger features a jagged aluminium blade with a ribbed resin handle, pointed cross guard and spiked pommel. It is authentically weathered in shades of silver and brown to produce a rusted iron effect.

This piece was gifted to executives from Sideshow Toys who visited the set in 2002, but before it was removed from the set Peter Jackson requested that it was branded with a unique code and note of ownership. As such, this piece is inscribed with ‘Witch King Dagger 12 June 02 l 0002 W Sideshow Toy.’ The dagger exhibits minor wear due to production use but remains in very good condition.

This spectacular curved sword was used by the Elven army during the film’s prologue, when the Dark Lord Sauron wages war against Elves and men. The Elves wait patiently for the approaching Orc army, before dicing their enemies with upwards blows from swords which are reminiscent of the Japanese nagamaki and Chinese podao style weapons.

Constructed by the acclaimed Weta Workshop, this sword features a curved blade and beautifully carved handle with an integral brass coloured leaf wrap that spirals to the base of the grip. This is another piece that was gifted to Sideshow Toys executives, and features the inscription ‘Prologue Elven Sword Sideshow Toy/12 June 02/0012 W’.

The piece exhibits minor wear due to production use but remains in excellent overall condition. 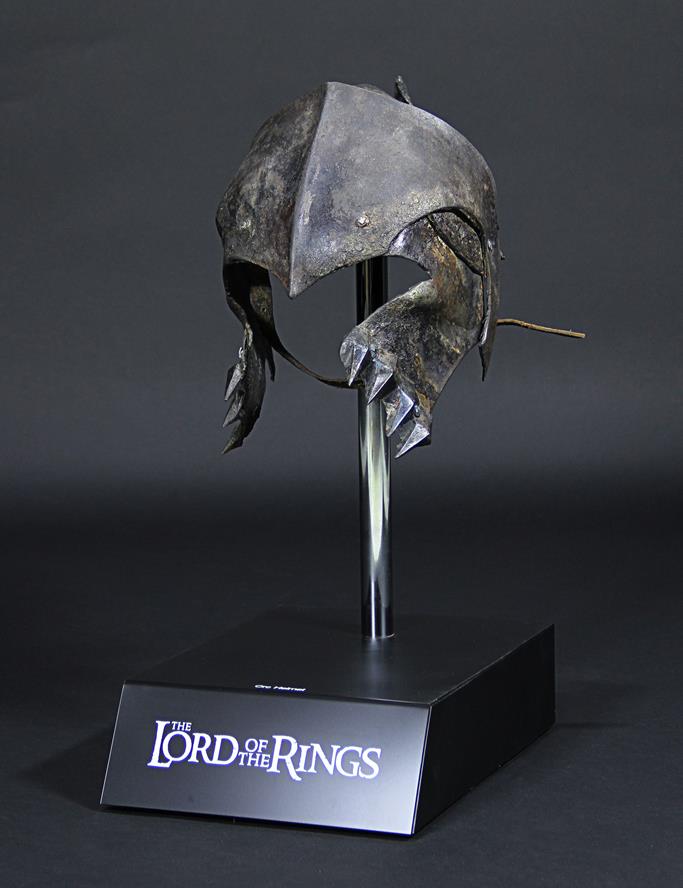 The Orc helmet is featured throughout the film series, most notably in the battles around Gondor and the Black Gates of Mordor. This particular helmet is made of vinyl and features a crested peak on the crown, narrow eye slits and sharp spiked cheek guards. It is finished in metallic steel paint and has mud and corrosion distressing applied. There’s also an adjustable leather chin strap so the helmet can be worn securely.

Despite being well used in the production, this helmet remains in very good condition and is supplied with a custom-made display stand.

The Elves can be seen using this type of shield throughout the film, but most notably it features in the film’s prologue, when the Dark Lord Sauron wages war against Elves and men, and in the climatic final battle of the third film, The Return of the King.

Another piece constructed by the world-renowned Weta Workshop, this elegant Elven shield resembles a large leaf (Elves are woodland creatures), and is intricately detailed with spiralling patterns. There’s a vertical metal grip on the back of the shield which is mounted to metal supports that are bolted in place.

This piece exhibits minor wear due to production use, but remains in excellent overall condition.

And remember, whether you’re a film memorabilia collector or avid LOTR fan, simply register at the Prop Store website to place your bid on one of these impressive, original weapons.