TOMBSTONE (1993, d. George P. Cosmatos) was part of a resurgent era for the Western. Just as Sergio Leone and Clint Eastwood’s THE MAN WITH NO NAME trilogy had redefined the John Wayne Westerns in the 1960s, so too would this work from writer-director Kevin Jarre. Oddly, though, TOMBSTONE was a troubled production from the start. The film, picked up out of turnaround from Universal by Cinergi, seemed to brush with death as often as Wyatt Earp himself. After securing the film’s rights, Cinergi would go on to fire writer-director Kevin Jarre after shooting had already begun due to conflicts with star Kurt Russell. They then brought on writer John Fasano to re-jigger the script for director George P. Cosmatos (FIRST BLOOD: PART II) who was saddled with the unenviable task to shoot someone else’s movie.

Usually, these kinds of adventures in the screen trade yield disasters of ISHTAR-like proportions. But in the case of TOMBSTONE, something magical happened. Whether it was the frontier-like strife of the shoot causing the artists involved to channel their “inner cowboys” or just the strength of Kevin Jarre’s original (and then severely cut-down) script, TOMBSTONE would become a sensation. It not only doubled up on its production budget at the domestic box office, but it would go on to become one of the most beloved and most owned Westerns on VHS, DVD and now Blu-Ray home video. Ask an American male who grew up in the 1980s or 1990s to quote you a few lines from Tombstone, and you’ll most likely find the huckleberry you’re lookin’ for.

“You might get me in a rush, but not before I make your head into a canoe.”

No cowboy is anything without his pistol. The sidearm the real life Wyatt Earp carried is a bit of a thing of legend in and of itself. Ned Buntline, a pulp novelist who was a contemporary of frontier legends like Earp, is said to have had specially commissioned a custom-made 12” Colt pistol that he sent to Earp with his own name, “Ned,” engraved into the wood grip. This pistol became known as the “Buntline Special.” However, as no historical or physical proof exists of such a pistol, it must be added to the library of tall tales to come out of the “Wild West.”

This didn’t stop armorer, self-proclaimed “Buckaroo,” and veritable modern cowboy Peter Sherayko from latching onto it when he and his company, Caravan West Productions, were given the job of supplying all the real weapons to the movie TOMBSTONE. Sherayko is as much a historian as he is a weapons expert, and his goal was to bring a period authenticity to TOMBSTONE that he felt was lacking in most other Westerns of the time. One such weapon was Sherayko’s personal take on Wyatt Earp’s legendary Buntline Special. 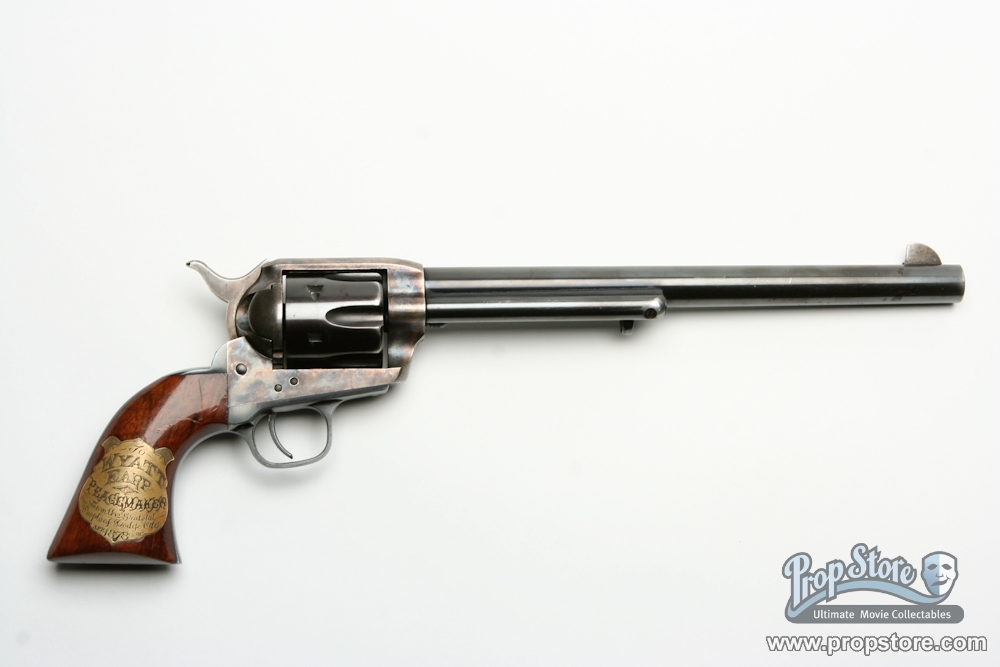 Sherayko based the hero prop from the movie on one of the few shreds of evidence that exists to actually support that Earp carried the long-barreled “Buntline,” a documented order for a 10” Colt pistol by Tombstone bartender “Buckskin” Frank Leslie that matches the historical mentions of the pistol. As Leslie would have known and likely admired Earp, Sherayko made the case that he would have wanted to carry a pistol just like the one the great Western lawman did. To that end, Sherayko sought to secure a custom-made 10” prop Colt pistol that would befit the character that Kurt Russell was to play.

The base weapon for the film prop is not an antique pistol but a modern-made, fully-functional replica produced by an Italian company called Uberti. Uberti, though, only made the standard sized 7 ½” barrel, so Sherayko had to order custom, 10” barrels directly from Colt. As with everything Sheryako supplied to the Tombstone production, these barrels were not with their own “authentic” touch. Sherayko had Colt stamp “Buntline Special” into the top of each of the barrels, a nod to the Wyatt Earp legend. After the base weapons were imported through the EMF (Early Modern Firearms) Company in the US, Sherayko and his armorers removed the stock 7 ½” barrels and replaced them with the custom, 10” “buntline” barrels. 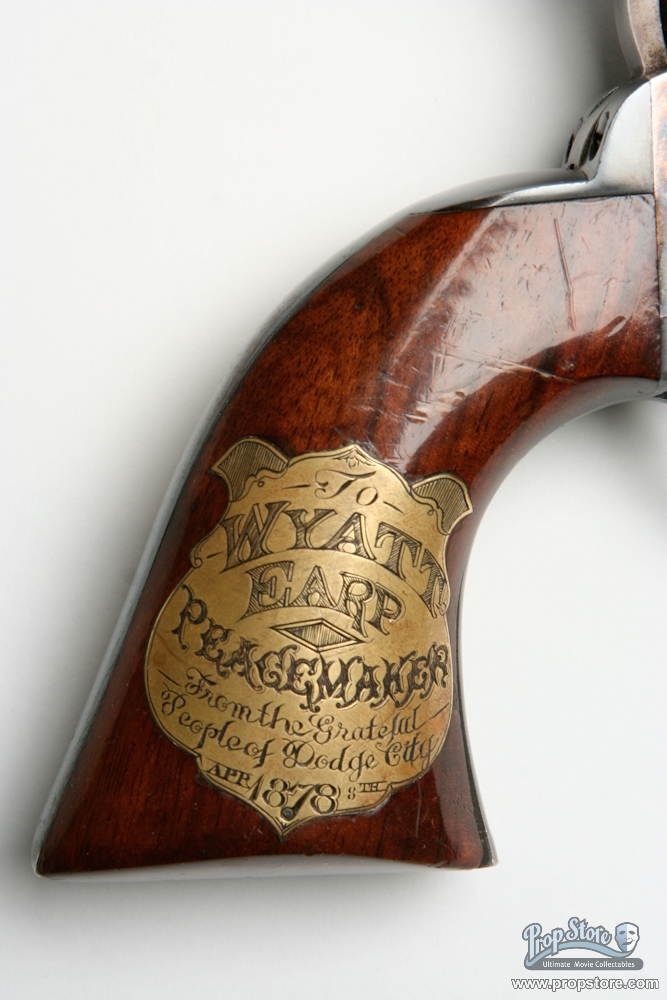 The weapons were close to complete. All that remained was paying homage to the wood grip that Ned Buntline had supposedly installed on all his custom Colts. Kevin Jarre, the original director, wanted to go for something a little bit more “legendary” than “NED,” though, so he cooked up a design of his own that engraver John Ennis would inlay into the wooden pistol grips. Done in brass, the engraving reads, “To WYATT EARP, From the Grateful People of Dodge City, Apr 8th, 1878.” The thanks is a nod to the service that Earp performed as a lawman in the infamous Dodge City, Kansas roughly a decade before he arrived in Tombstone, AZ. The term “Peacemaker” refers not to Wyatt Earp, but rather to the name of the single-action pistol that Colt manufactured during this period.

In the end, three of these magnificent weapons were supplied to the production, each with sequential serial numbers as supplied by Uberti. One of these went home with Wyatt Earp himself, Kurt Russell, one was kept by director George P. Cosmatos (now sadly deceased), and the final one (this one) is owned by a private collector. Because these weapons were all revolvers, no modifications needed to be made to have them fire blanks on set, so they all remain real, live-fire revolvers today. A neat tidbit on this comes from Sherayko himself, who said that just one live bullet was fired through any of the Earp Buntlines during shooting, and that was fired by the director, Cosmatos, under the close supervision of Sherayko and his armorers. Think of it like the Christening of a ship, except swap the bottle of champagne for a .45 caliber bullet.

Some further background research in preparation for this article yielded some exciting results. Because firearms all have serial numbers and very detailed ownership histories, they are unique to the prop world because they often have, excuse the term, “bulletproof” provenance. A call to EMF confirmed that the Colt Hartford (then with a 7 ½” barrel) with the serial number matching this weapon was supplied to Caravan West Productions, Sherayko’s company, in April of 1993, just weeks before the TOMBSTONE production began in Arizona. Further research into Sherayko’s own records yielded documentation showing proof that three Colt single-actions with the designation “BL 10-inch” (Buntline, 10 inch barrels) were rented to the production. The serial numbers are sequential, and one of them matches the subject of this article.

A lucky peak into the Buena Vista photo archives happened to yield the grand-daddy of all prop discoveries: the screen-match. 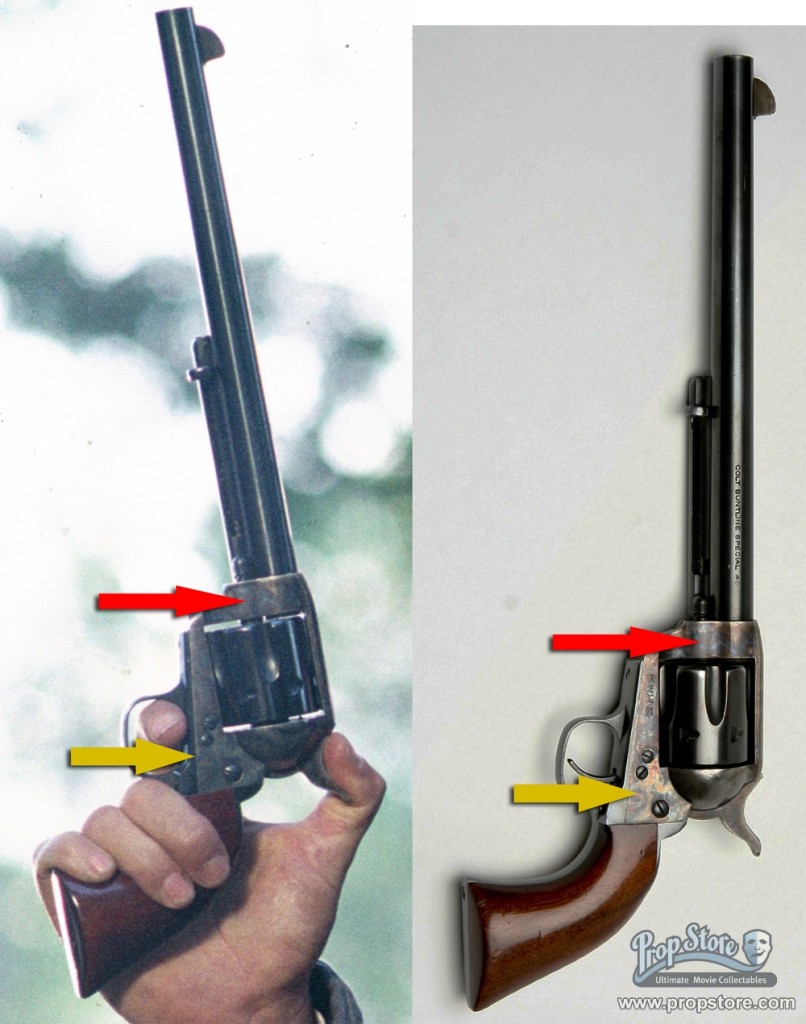 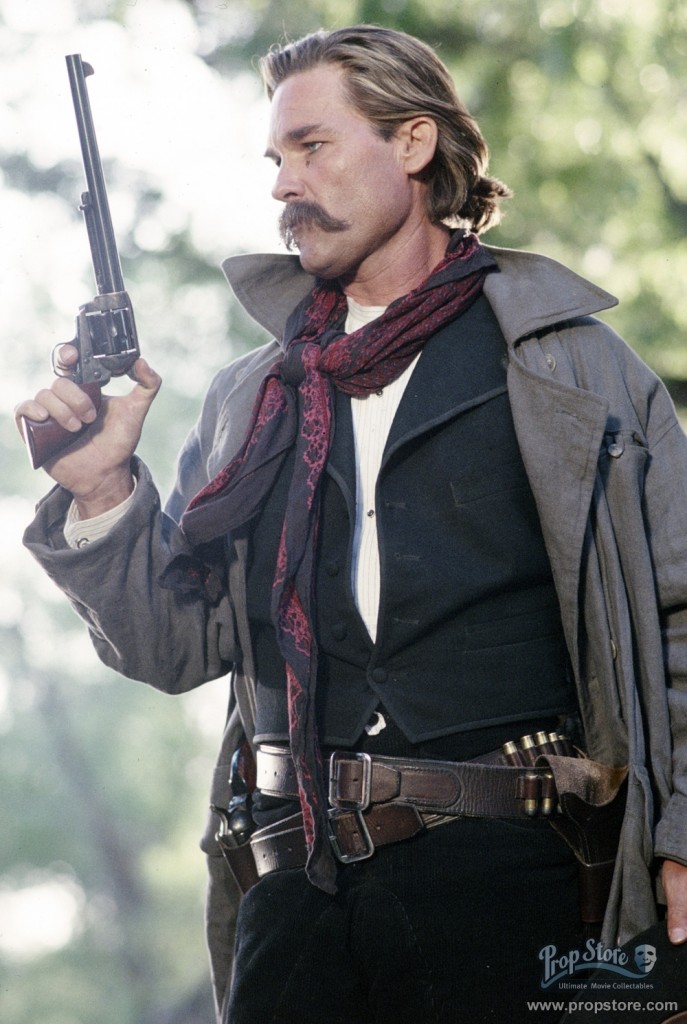 Although this pistol has not yet been matched to any of the frames in the TOMBSTONE film, there was a publicity photo that yielded a definitive match, proving without a doubt that this weapon was not only made for Wyatt Earp, but that he wielded it (and likely fired it) on set. This shot was likely taken in between (or during) actual takes on set, and appears to come from the scene where Wyatt Earp shows up to find that Doc Holliday has put his own life on the line to face Johnny Ringo.

A magnificent weapon and prop, indeed. One we are most fortunate to be able to share with the collecting community.

“He was quoting the Bible, Revelations. ‘Behold the pale horse’. The man who ‘sat on him was Death… and Hell followed with him.’

The writer extends a special thanks to Peter Sherayko for being an enthusiastic and inexhaustible font of Western knowledge and to John Ennis for being not only open to a complete stranger’s strange phone calls but for being so willing to share whatever he could remember of that little engraving job he took 19 years ago. You can read more about the guns and gear of Tombstone in Peter Sherayko’s book on the topic, Tombstone: The Guns and Gear.