To celebrate the 25th Anniversary of Jurassic Park, we’re taking a look back at some of our favourite props, costumes and more from the hit adventure film sold on Propstore over the past few years… 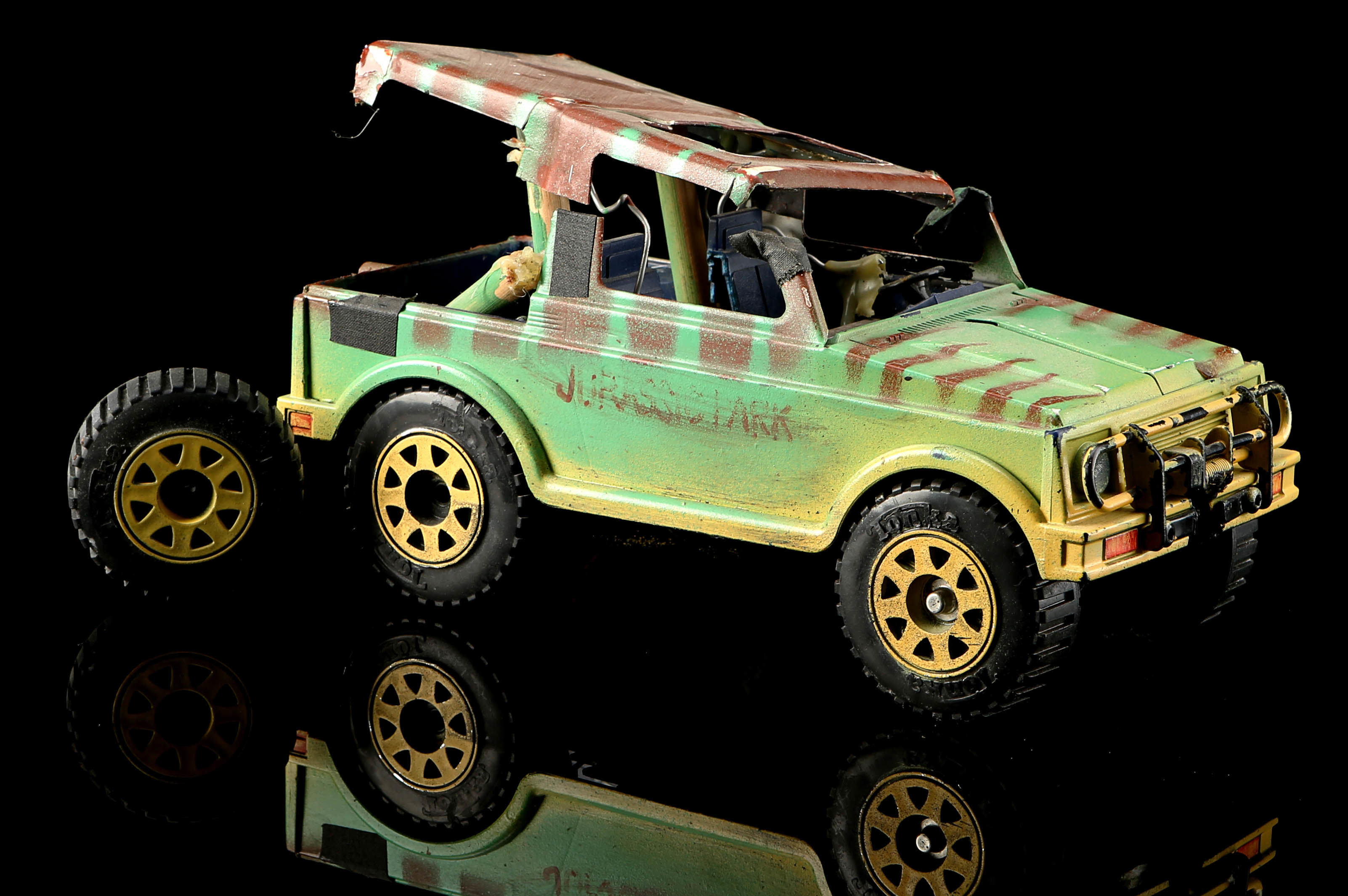 A distressed animatic Explorer vehicle model miniature from Steven Spielberg’s sci-fi film Jurassic Park. Phil Tippett is credited as the film’s Dinosaur Supervisor, and produced stop-motion animatics for the dinosaur sequences, as well as supervised the CG animation, for which he won the Oscar® for Best Visual Effects for his work on this film at the 66th Academy Awards®.

This vehicle was made for the animatic sequence which combined storyboards and stop-motion animatic to visualize the Tyrannosaurus Rex attack on the tour vehicles. The item screen matches to a shot in which the T-Rex drags the vehicle while it is upside down. The car is made from a modified plastic Tonka car, and is painted green, red, and yellow with ‘Jurassic Park’ on the side doors to match the design of the park cars used in the film. 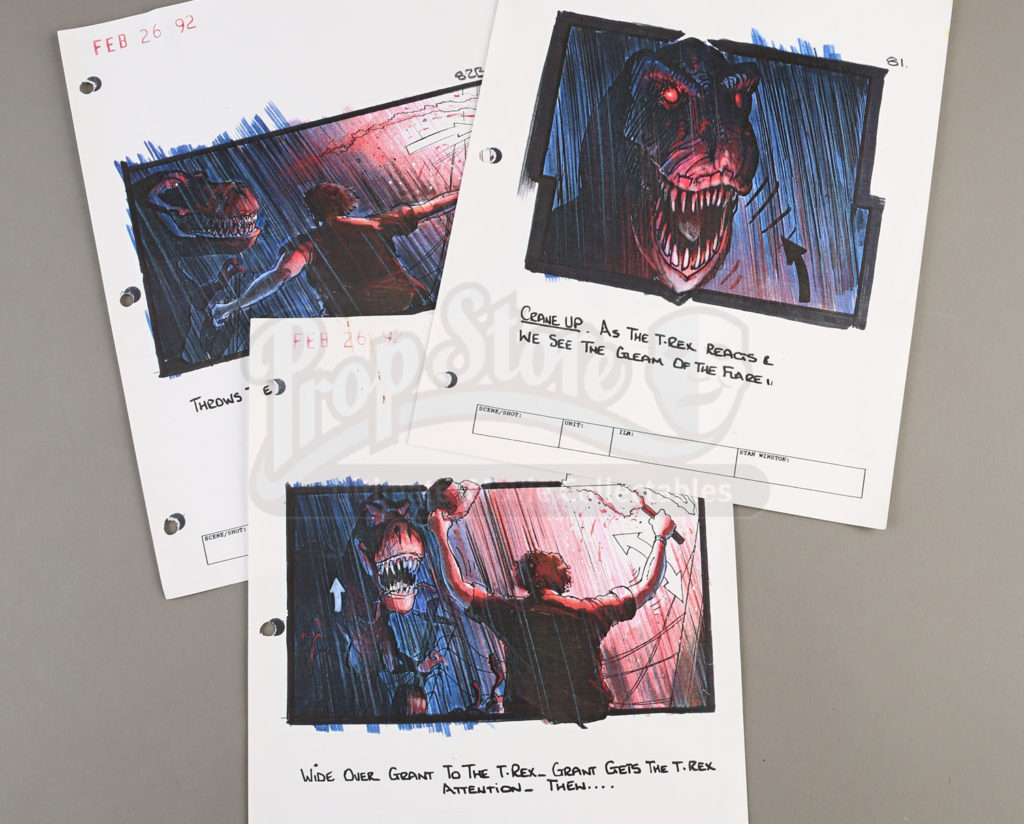 Following on from the animatic, take another look into a behind the scenes look into the creation of the same iconic scene. These acetate cels were drawn by Phil Tippett and used like traditional animation cels to direct DID animators in shots. They could be physically laid onto computer monitors when reviewing in-progress shots to make notes on poses and timing for further revisions.

This is a set of 14 printed storyboards and 21 hand-drawn acetate cels. The printed storyboards include three colored boards, and depict the T-Rex attack on the tour vehicles. Numerous storyboards the date stamped or printed at the top left corner, and some include handwritten annotation discussing the scale of the puppet. Labeled ‘MR’ for Main Road, the acetate cels are hand-drawn on transparency sheets using black ink. Nineteen acetate cels illustrate Dr. Grant (Sam Neill) throwing a flare with the T-Rex moving toward it. Two acetate cels serve as an overhead map of the attack sequence, and show the overall mapping of the movement of the T-Rex. 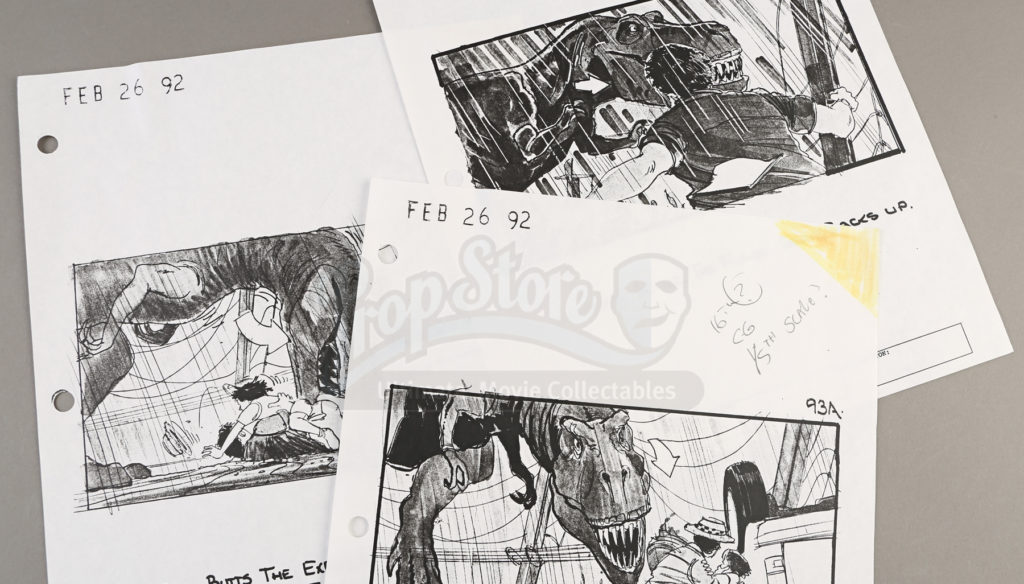 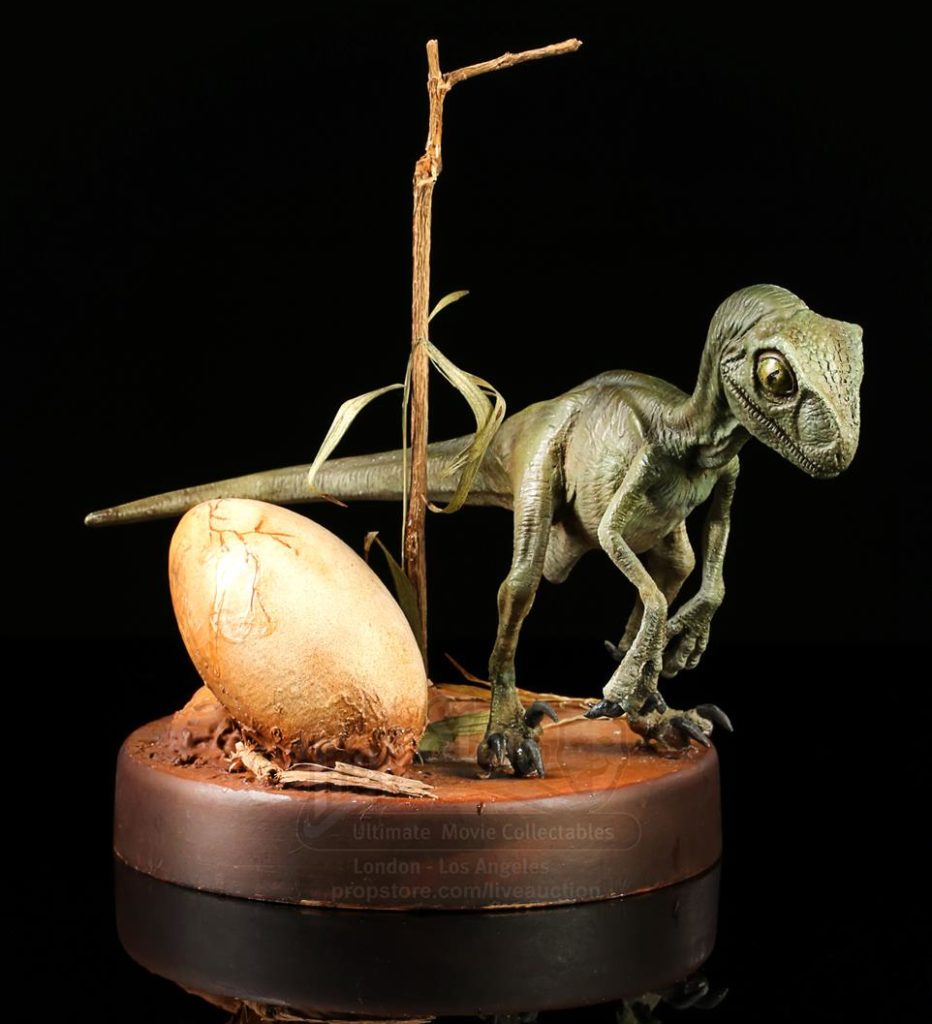 Another great piece that we’ve sold previously from Jurassic Park is this beautifully-made velociraptor hatchling maquette made by the Stan Winston Studios. This maquette was concept display made for the film, showing an infant velociraptor standing near two unhatched eggs.

The piece has been airbrushed with expert paint detail, and the display includes faux-foliage attached to the base and would have been used by the production company when they were designing the look of the film. 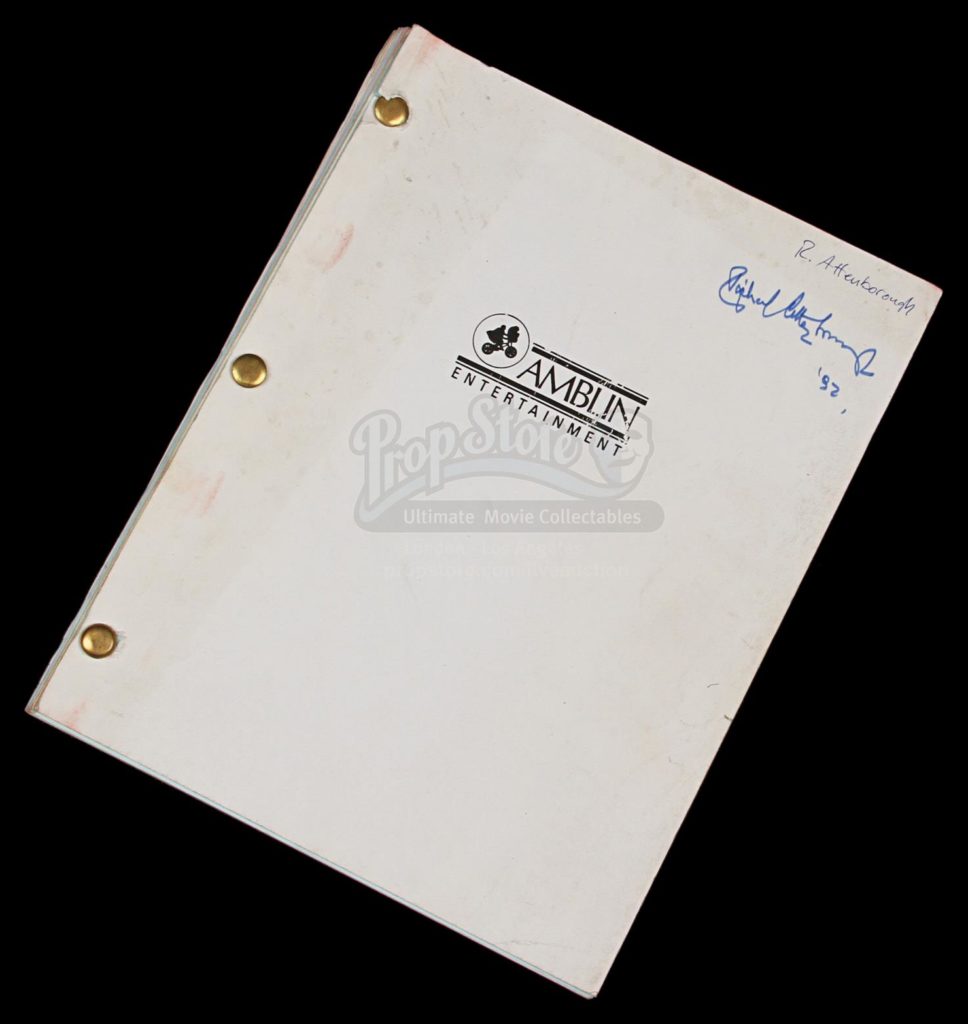 A very special piece of Jurassic Park movie history is Richard Attenborough’s personal annotated script, which originated from Attenborough’s estate. The script is filled with his personal notes and amendments, handwritten in blue marker with circles drawn around the page and scene numbers he was directly involved in which shows an interesting look into the thinking and acting process of the actor. 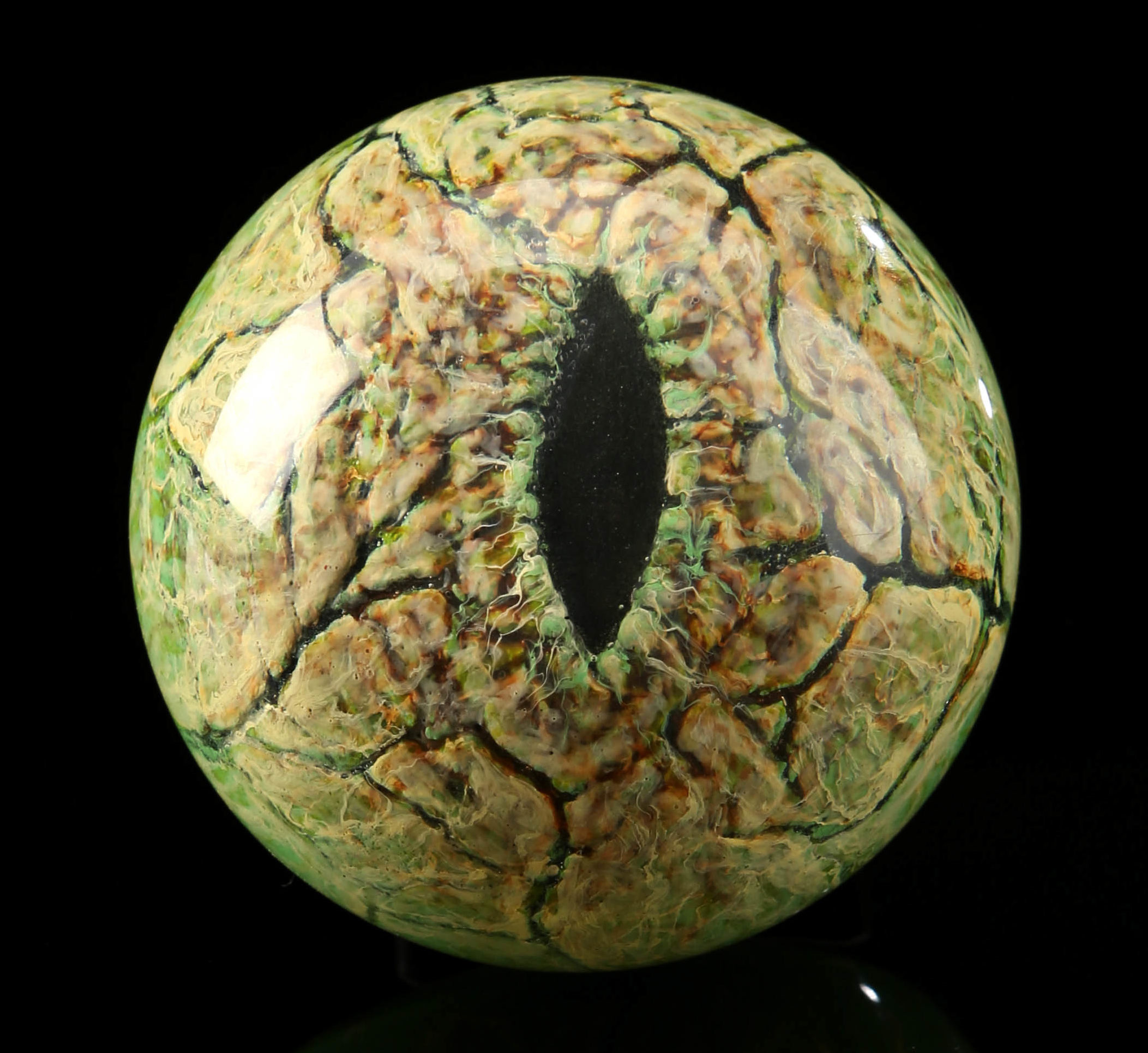 Another great art department reference piece is the Velociraptor reference eye, made of cast resin that is covered in clear acrylic. Beneath the acrylic, the textured eye is painted in shades of green, yellow, and brown with thick veins that make up the eerie eye colour of everyone’s favourite sneaky dinosaurs. 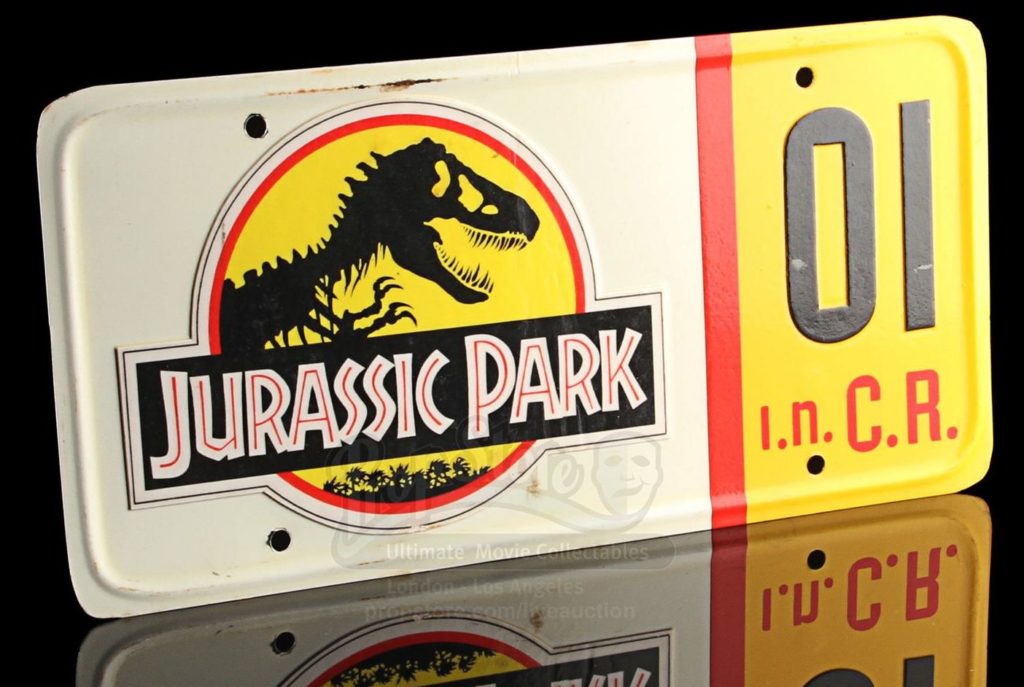 Another really iconic piece is the Ford Explorer licence plate from one of the Ford Explorer vehicles, which were most memorably used in the scenes in which Dr. Alan Grant (Sam Neill) and Dr. Ian Malcolm (Jeff Goldblum) encounter the escaped Tyrannosaurus Rex.

Made from metal, the licence plate has been painted white and yellow with red lettering, with vinyl appliques featuring the Jurassic Park logo, “01” and a red strip are adhered to the plate’s front make up this iconic prop. 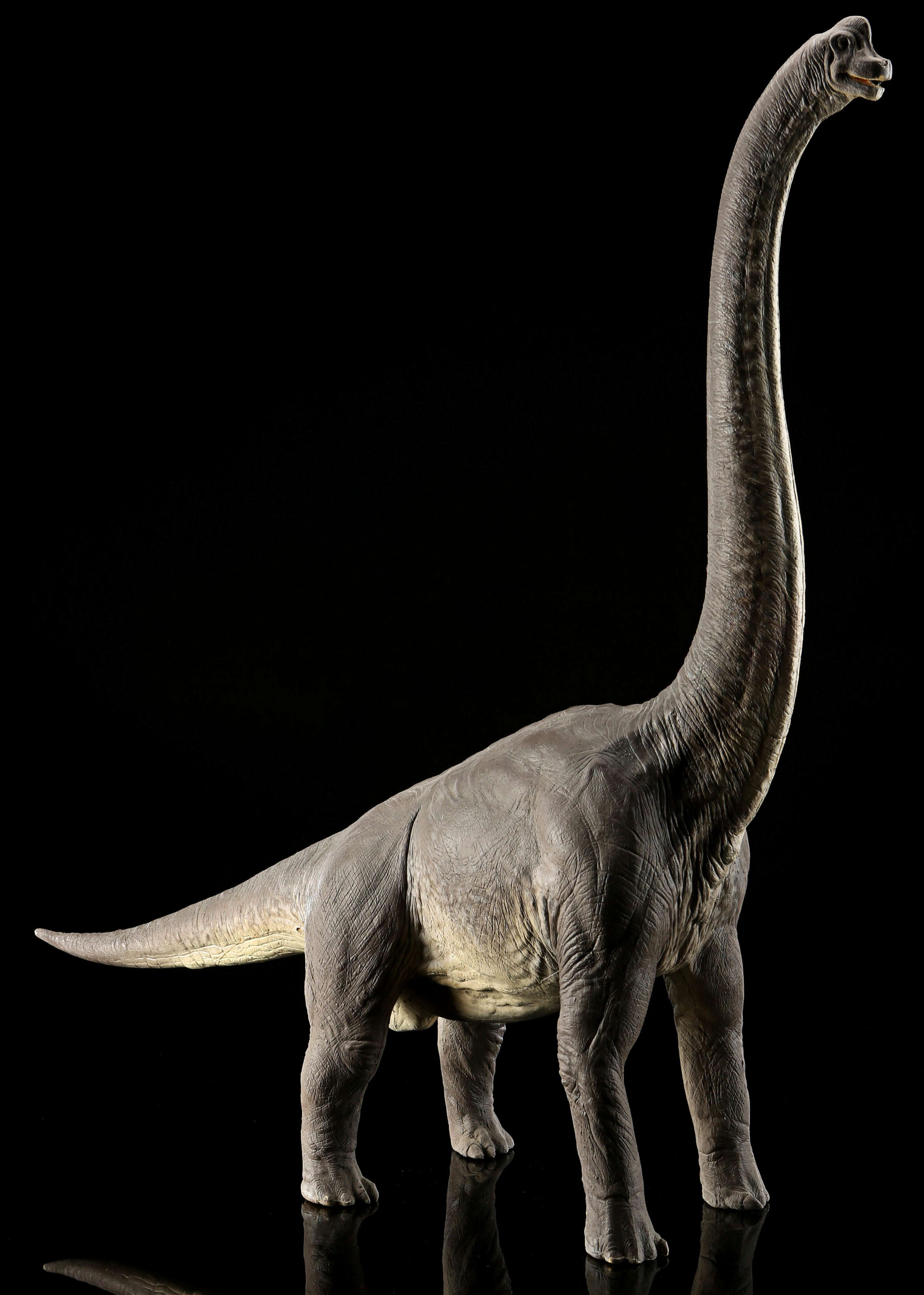 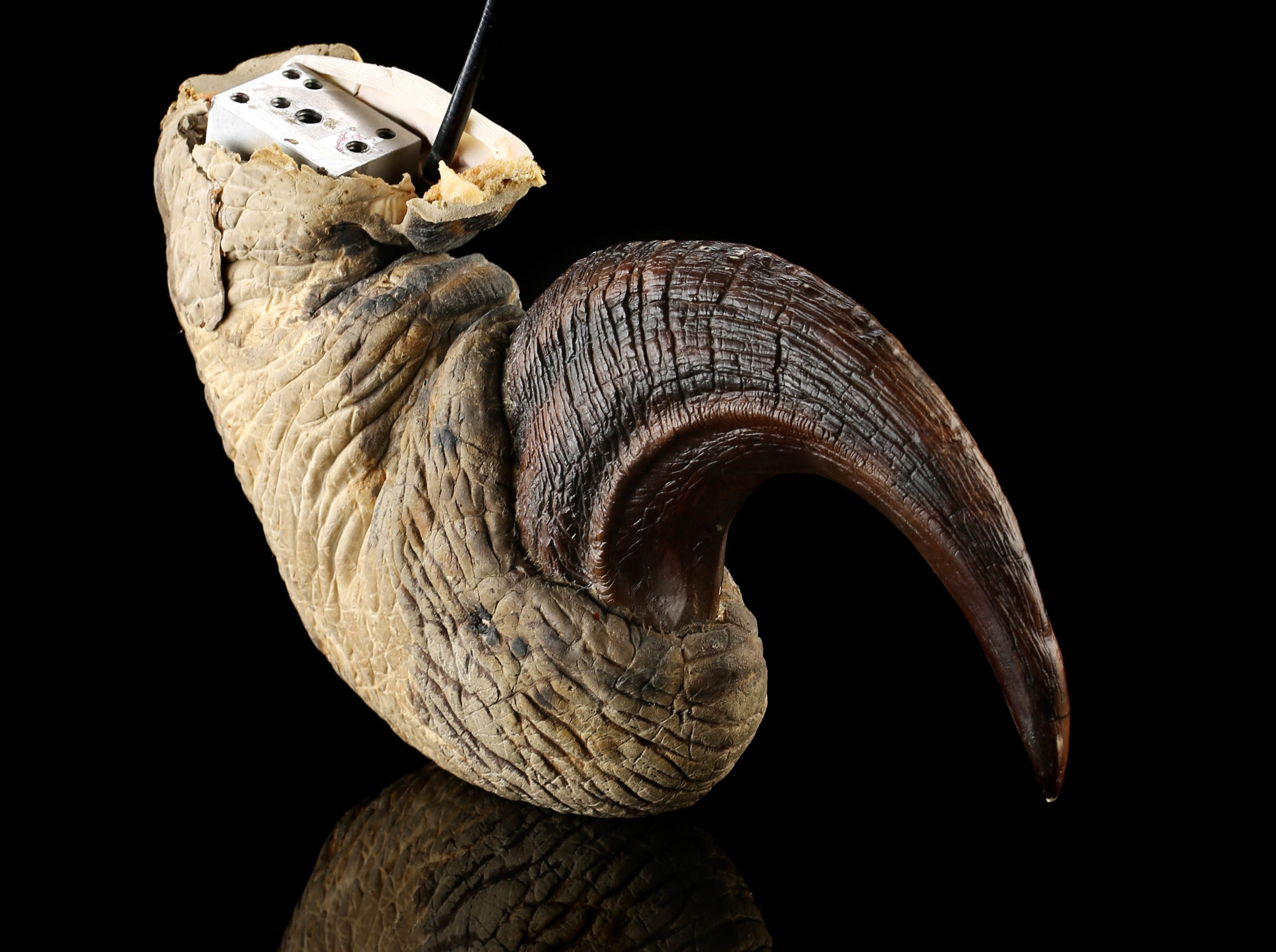 Another iconic piece from another iconic dinosaur – hero cable-controlled velociraptor claw used in the fan-favourite kitchen scene where Tim (Joseph Mazzello) and Lex (Ariana Richards) hid from a pair of velociraptors and Lex witnessed a raptor tapping the floor with its razor sharp claw.

Made at Stan Winston Studio, this toe features a foam latex skin on a metallic armature and features a long curved claw that is made of resin. The skin shows wrinkles cast into the foam latex and is painted to match the raptor’s dark skin tone. The claw, which can screen match due to the grooves and dents in the bone, is textured to appear rough and sharp and protruding from the top of the toe is a black wire which leads to the interior cable mechanism used to tap the claw. 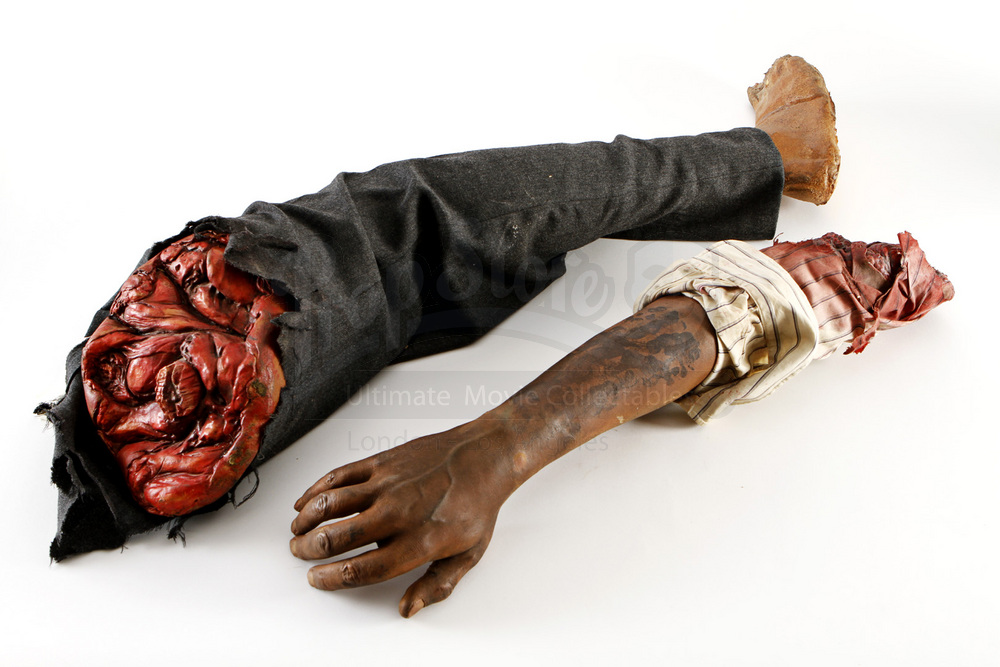 This Dr. Arnold (Samuel L. Jackson) arm and leg is from yet another iconic scene in Jurassic Park. During Ellie’s (Laura Dern) chase scene in the maintenance shed, she thinks she’s finally found safety when she feels Dr. Arnolds arm touch her shoulder until she turns and quickly realises that the hand is completely severed!

The arm is made out of urethane and features gory detailing of flesh and bones around the severed upper arm, as well as his bloody ripped up white striped shirt. The same can be said for the second item in this set, Dr. Arnolds leg. Although this foam filled latex leg is not seen in the final cut of the film, it was made for the production and still exhibits the same style of gray trousers Dr. Arnold wears onscreen. 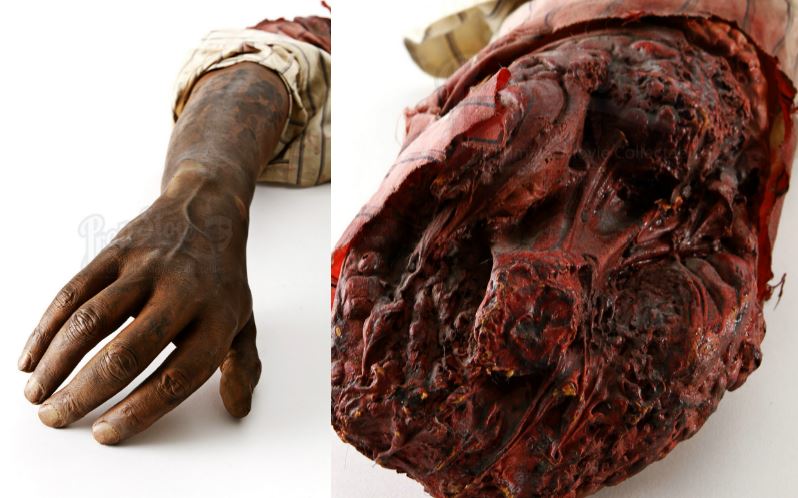 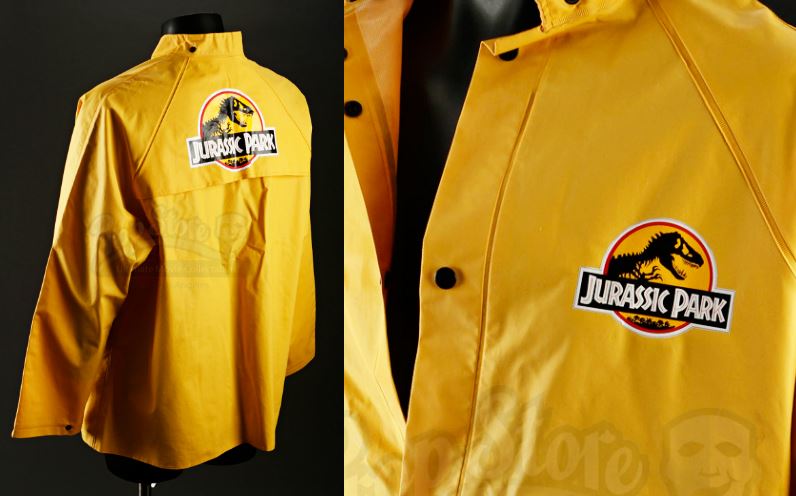 And last but not least in our list is the Yellow Rain Jurassic Park Jacket. In the film, billionaire tycoon John Hammond (Richard Attenborough) invites a small group of experts to his amusement park that features genetically engineered dinosaurs. Unfortunately for the parks visitors, the power is shut off during a massive storm, releasing the hungry dinosaurs from their cages.

This jacket, which is made from durable vinyl and nylon, can be seen throughout the film during the hurricane. It features the classic Jurassic Park logo over the left breast and also on the back near the shoulders. The jacket buttons up in front with six plastic buttons and includes two large front pockets that also include button closures. Please note that the jacket does not include a hood, which was previously attached with buttons that are still present.

If you liked what you saw, then why not look at our other Jurassic Park lots on the site and get your very own piece of movie magic!

And don’t forget to follow us on Twitter and Facebook. And don’t forget, you can explore so much more at our archive and see the extensive range of film and TV items we have for sale and auction over at propstore.com!

Share
Related Articles
18.08.2017  |  Auctions
Propstore Live Auction 2017 Presents… Movie Artwork
Welcome to the week three of our Preview Blogs for the upcoming Propstore 2017 Live Auction.  Today’s theme is Movie Artwork. From conceptual sketches to full paintings, let’s take a look at some of our favourite pieces coming up in this year’s auction…
23.09.2019  |  Uncategorized
10 Things You Need To Know about the Jurassic Park Series
With so many dino-licious items among Propstore’s Entertainment Memorabilia Live Auction lots this year, we decided to delve into a quarter-century of Jurassic Park movies.
20.08.2020  |  Auctions
GOING EXTINCT: The Effects of Jurassic Park l Entertainment Memorabilia Live Auction – Los Angeles 2020
When Phil Tippett first saw the computer-animated T-rex stomping towards him in an Amblin screening room in 1991, he knew he was finished. Conjured on the sly by the team at ILM in their San Rafael facility, the fearsome creature moved with a lifelike smoothness that Tippett could only dream of achieving using the stop-motion […]
16.12.2016  |  Uncategorized
The Ultimate Propstore Christmas Wish List!
With Christmas just around the corner, you might still be looking for a special gift to make this festive season one to really remember! Propstore have over 7000 items for you to browse online, with great items from all your favourite films and TV shows like Star Wars, Jurassic Park, The Simpsons and much more! Check out […]
Sign up to be in the know