In the Spook’s world, one cannot be too well armed. The presence of demons, boggarts and ghosts leave these roving supernatural exterminators in a perpetual state of danger, so they have to be prepared for any sort of encounter with any of these terrors. Here we explore some of the weapons, tools, and armor used by Gregory, Bradley, and Ward…

Being the last remaining Falcon knight, Master Gregory (Jeff Bridges) travels the land as a Spook for hire – when not tending to a local tavern’s ale supply. For a witch hunter with such pedigree, being armed with the right tool for the right job is not just a necessity, but rather second nature. This lot exhibits Gregory’s proficiency with bladed weapons, housing several metal daggers and a prop longsword. A prop version of the Spook’s weapon of choice, the Rowan staff, is also included with the set. 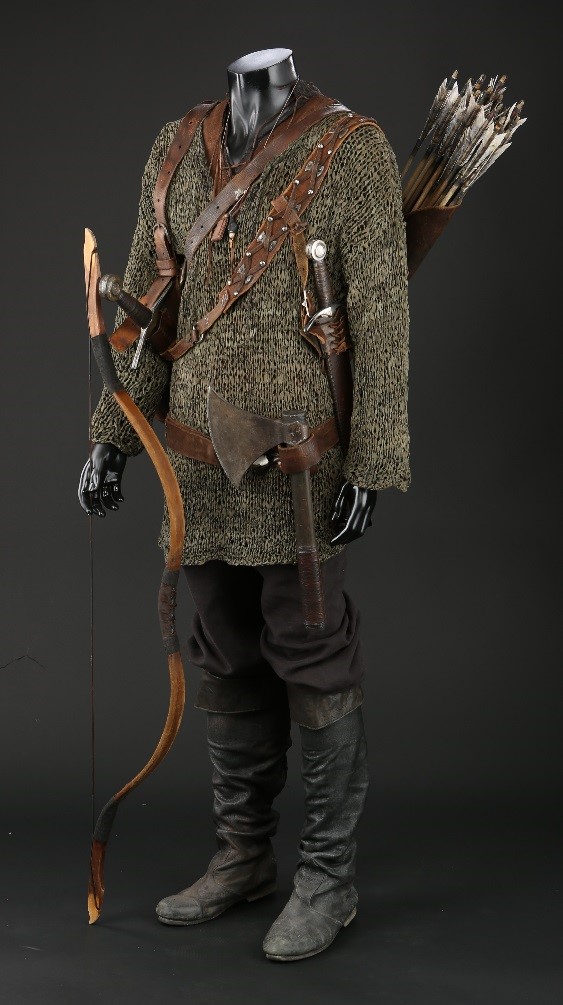 Serving as Master Gregory’s apprentice for ten years, Mr. Bradley is well acquainted with how well-equipped one should be when dealing with denizens of the dark. William finds his harshest test as he and Gregory encounter Mother Malkin (Julianne Moore). As she possesses the body of a young child, he is forced to employ almost every item in his arsenal to try and bring down the witch queen. This lot displays William Bradley’s preference for light layers of clothing and his variety of weapons such as several prop melee weapons as well as a bow and arrow set. The quivered arrows are assorted with the heads ranging from soft foam to hard metal. 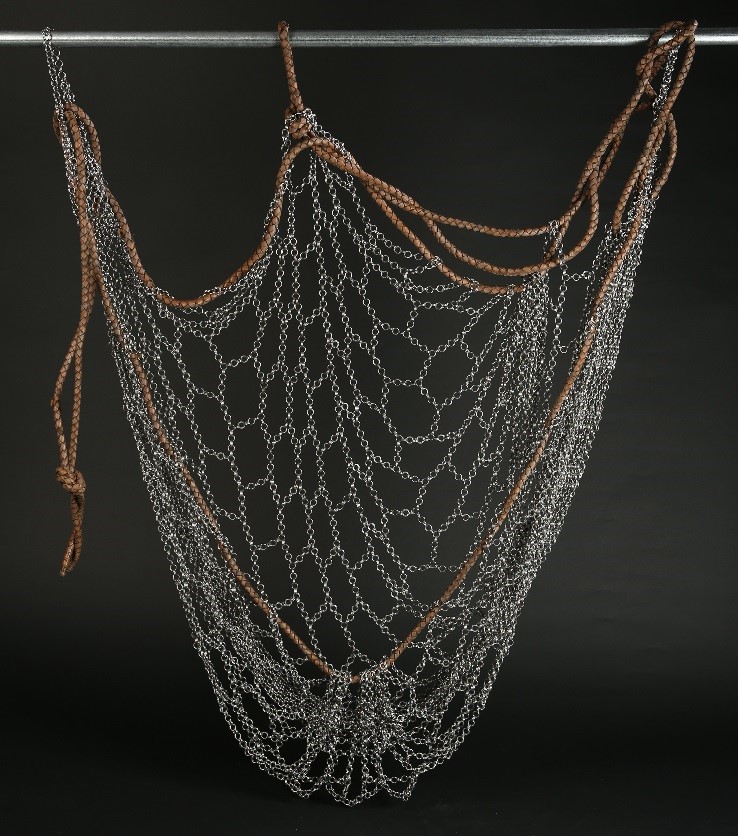 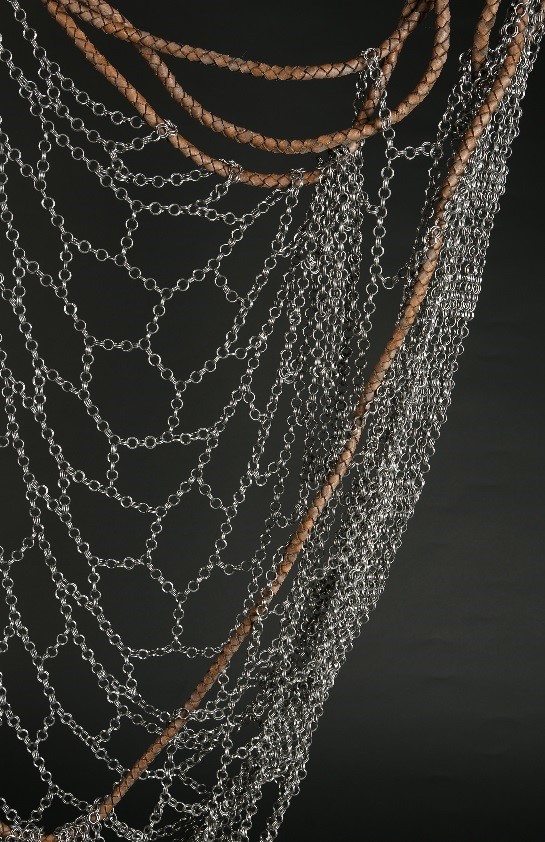 A key part of any Spooks inventory is a healthy supply of silver, which is used to suppress the power of witches. Therefore, a net made of this powerful metal is an invaluable tool when it comes to apprehending the dark creatures as it offers a hunter a considerable edge in an otherwise deadly circumstance. This piece is composed of a large series of small metal rings which extend widely in a webbed pattern. The net is handled using a long strand of braided leather which is woven throughout the edge of the entire piece. 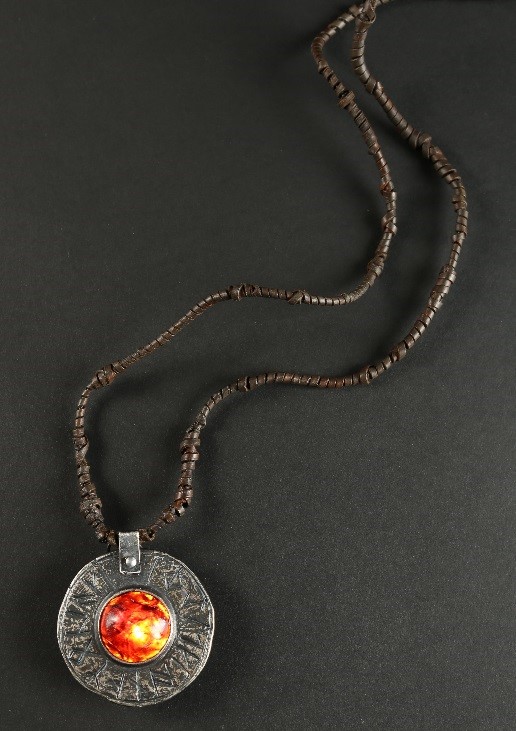 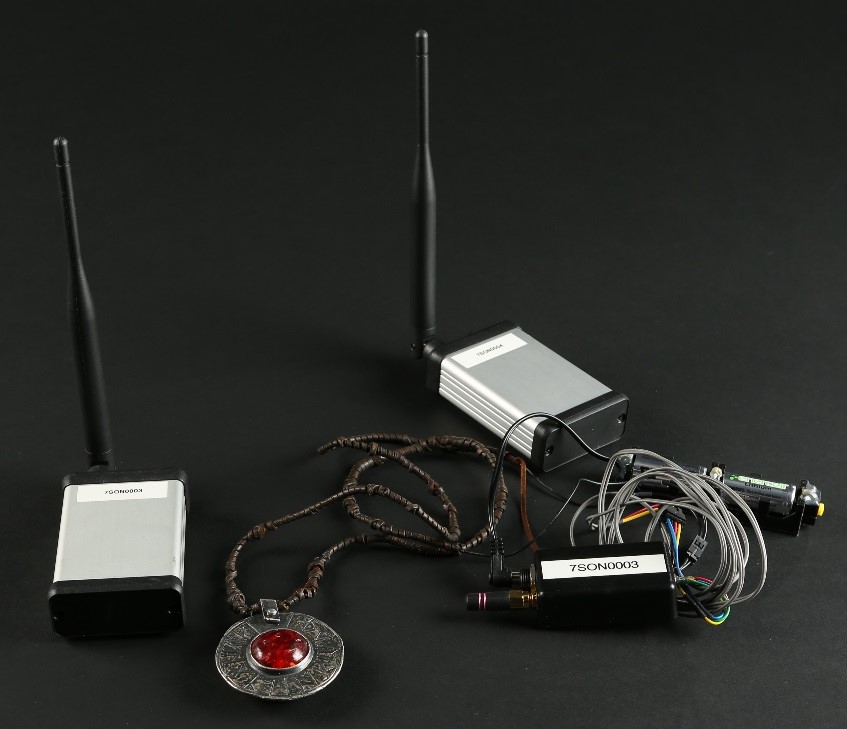 The Umbran Stone is a powerful trinket, especially in the hands of a witch. For Mother Malkin (Julianne Moore) the talisman imbues her with unimaginable strength. The witch queen only became vulnerable after the stone was stolen and given to Tom Ward (Ben Barnes). The necklace has an imitation stone amulet which lights up at the center, while the neckband is composed of wires bound in thin leather strips extending at the back to a power unit.

Items in the Seventh Son Auction open for bidding June 20th on the Propstore website, with lots closing for bidding July 2nd. Thank you for joining us for our Seventh Son blog coverage and be sure to check out our other articles in this auction series!

Love the items? Be sure to tell us on Twitter and Facebook. And don’t forget to explore our extensive archive of film and TV items we have for sale and auction at: www.propstore.com

Share
Related Articles
27.06.2016  |  Auctions
Seventh Son Auction – The Dark Queen and Her Cadre
With the dawning of the Blood Moon, the witch queen Mother Malkin (Julianne Moore) escapes the prison in which she’s remained for forty years. Malkin calls on her lieutenants to aid her as she awaits for the Blood Moon to become full, making her power unstoppable. Each of these aids joins her from around the […]
13.06.2016  |  Auctions
Seventh Son Auction – To Arms: Dressing the Armor of a Kingdom
In a realm plagued by supernatural monsters, mankind must rely on the availability of wandering Spooks, or witch hunters to protect themselves; however when a Spook is not readily available, it falls on the people of the kingdom to stand and keep their homeland safe. One of the most pivotal elements these oath takers rely […]
21.06.2016  |  Auctions
Seventh Son Auction Giveaway Competition
20.08.2015  |  Auctions
5 Weapons from The Lord of the Rings you can Actually Own!
Register at the Propstore website to place your bid on one of these five original pieces of The Lord of the Rings movie memorabilia.
Sign up to be in the know