Welcome to the next instalment of our weekly Preview Blogs for the Prop Store 2017 Live Auction. Today’s topic is ‘Movie Legends’, and we will be focusing on five of the biggest movie stars, ranging from the urbane Roger Moore and the masterful Al Pacino, through to some of the top action heroes of all time (Harrison Ford, Tom Cruise and Arnold Schwarzenegger)…

Roger Moore’s death earlier this year served to remind us of his witty and sophisticated take on James Bond, a character that he played seven times (more than any other actor).  Of all Roger Moore’s Bond films, ‘The Spy Who Loved Me’ is generally considered to be the best, and we are very honoured to be able to offer his Royal Navy Cap in this year’s auction.

Another great item featured in this year’s auction is something that is not only legendary, but also instantly recognisable – Harrison Ford’s bullwhip from ‘Indiana Jones and the Last Crusade’.  Indy’s bullwhip has already generated a lot of interest already from fans and collectors and I’m sure that it is on many people’s prop wish-list this year! 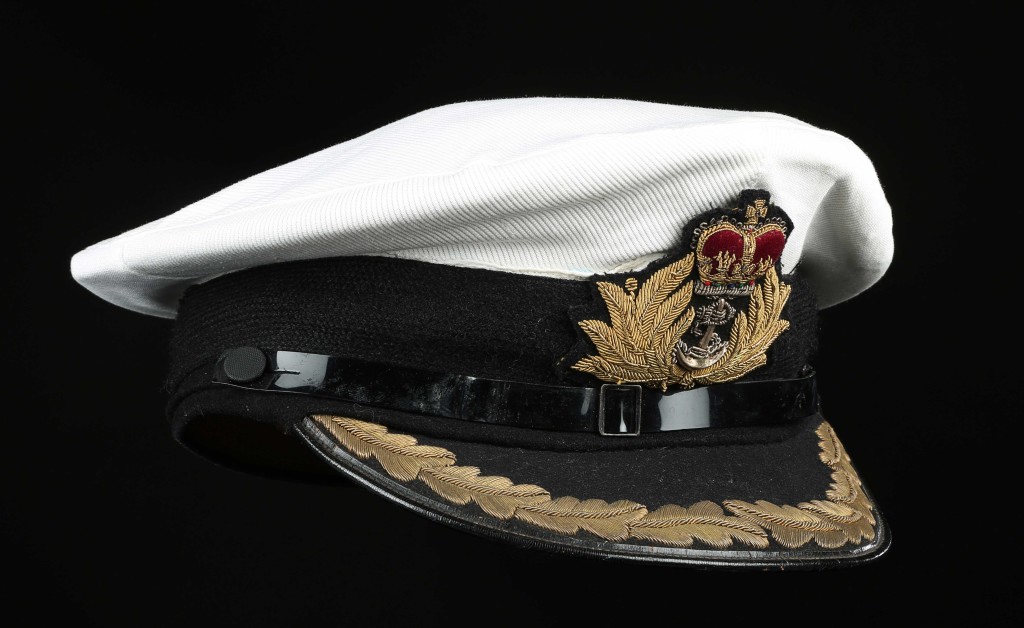 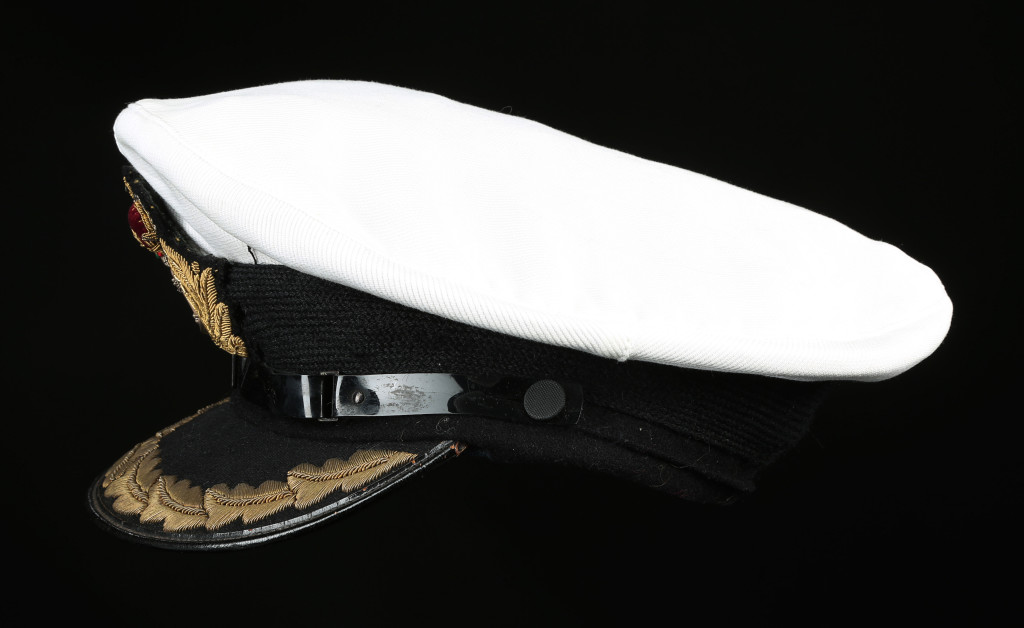 First up in our Movie Legends picks is James Bond’s (Roger Moore) Royal Navy cap from Lewis Gilbert’s spy film The Spy Who Loved Me. Created by Gieves & Hawkes Ltd., the cap is made of white cotton, with a black cotton and leather peak. It displays a black knitted band and is dressed with a black rubber chinstrap. Embroidered in fine faux-gold wire along the edge of the peak is a braid of oak leaves.

A Royal Navy patch, from a subsequent production, is stitched to the front. The interior features a brown leather sweatband and a Bermans & Nathans costumiers label reading “Roger Moore. James Bond. 11523. The Spy Who Loved Me”. A hand-written label, reading “Radford”, is adhered in the sweatband, which suggests the cap was used in multiple productions and for any Bond fans, this lot is definitely a beautiful addition for any collection! 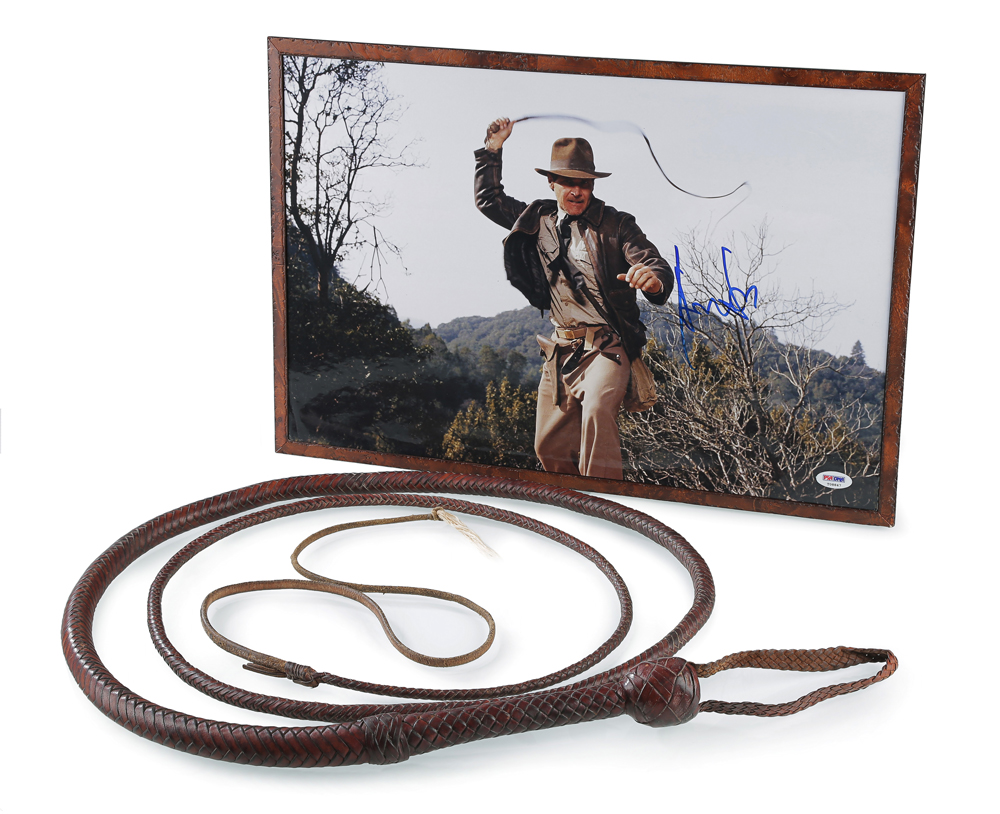 Another amazing lot in this year’s 2017 Live Auction is Indiana Jones’ (Harrison Ford) bullwhip from Steven Spielberg’s adventure sequel Indiana Jones and the Last Crusade. Synonymous with his character, Jones carried his bullwhip throughout his adventures in all four Indiana Jones films. This particular whip was created for various scenes including the rescue at Castle Brunwald, where Jones swings from electric cables to reach the room holding his father, Henry Jones Sr. (Sean Connery).

Under the supervision of Glenn Randall, stunt co-ordinator for Raiders of the Lost Ark, Ford learned how to use the bullwhip between takes. By the time they came to film the third instalment, he was considered a whip expert; a major achievement for the actor, who injured his wrist in an earlier career as a carpenter.

The bullwhip was made by master whip maker David Morgan, who also made whips for Catwoman (Michelle Pfeiffer) and Zorro (Antonio Banderas). It is 10 feet long and constructed from 12-plait, natural tan kangaroo hide, with a ball-and-loop detail at the end of the handle.

Accompanying the whip is a letter of authenticity written by Bronco McLoughlin, who was a stunt performer and wrangler for the film, as well as serving on Indiana Jones and the Temple of Doom. Also included is a 13” x 19” photograph in a rustic brown wooden frame, autographed by Ford in blue marker, the photo depicts Jones wielding his whip. 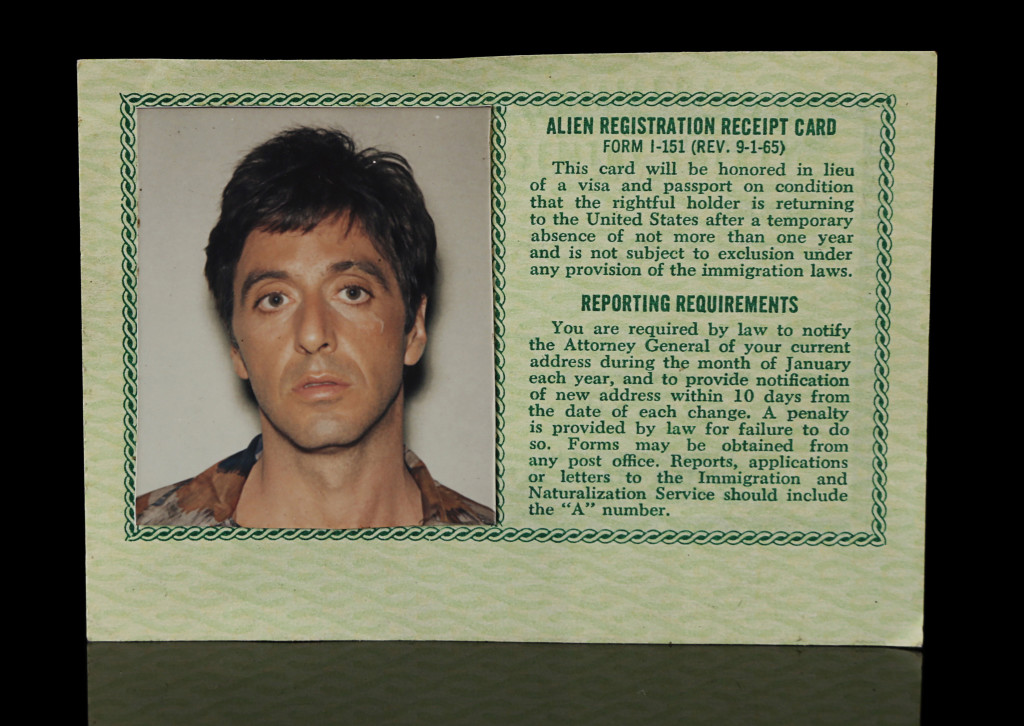 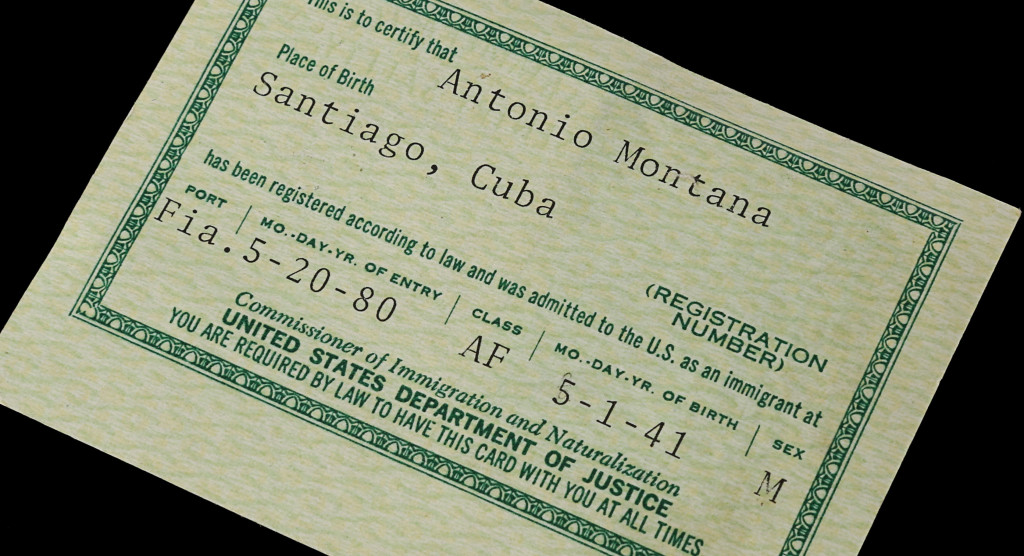 This next lot up for auction is Tony Montana’s (Al Pacino) green card from Brian De Palma’s crime drama Scarface, and screen matches to the scene in which Montana received his card shortly before leaving the camp.

Printed on green patterned card, the wallet-sized card displays Montana’s full name, birthplace and additional immigration details. The card is printed accurately to replicate the genuine immigration document of the Mariel boatlift period and features a colour photo of Pacino in character as Montana. The lot is also presented on a custom-made display base in an acid-free ultraviolet filtering case which is magnetised for easy access to the prop. 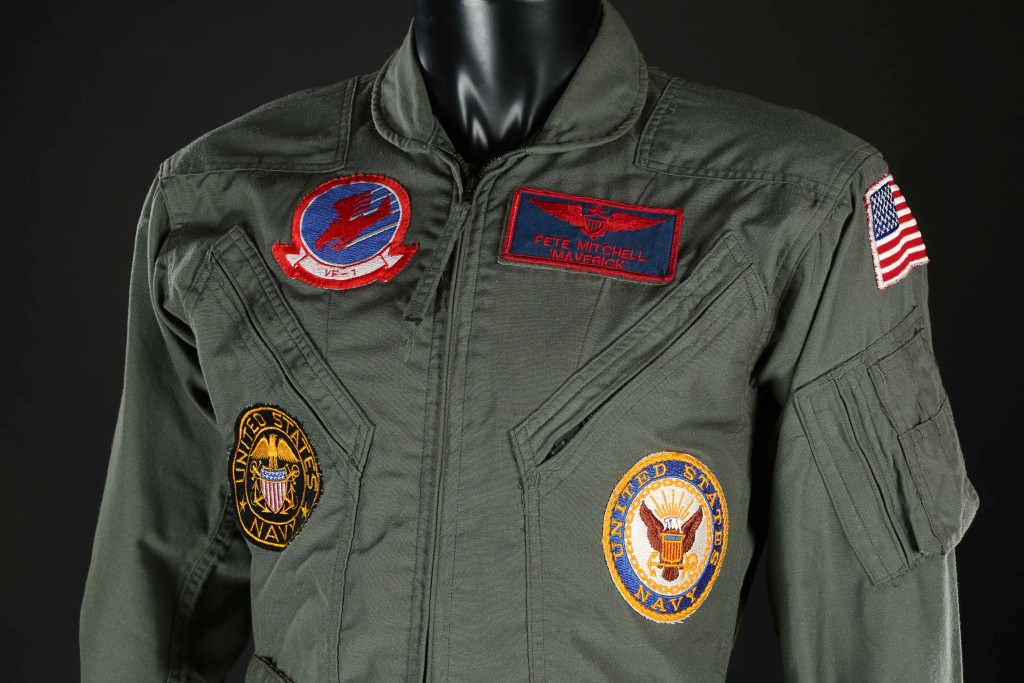 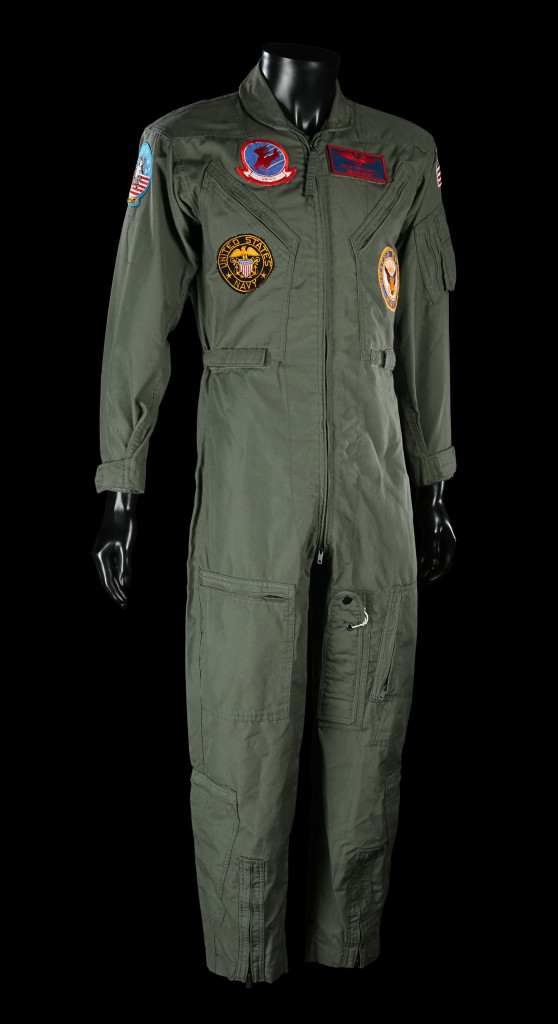 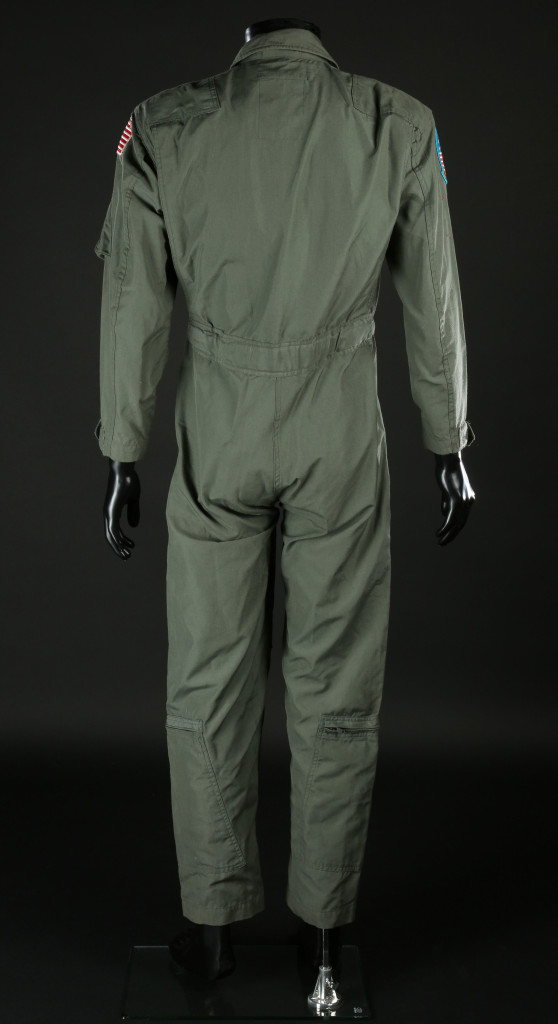 If you’ve got a need for speed, then this next lot is for you! Pete ‘Maverick’ Mitchell’s (Tom Cruise) iconic flight suit from Tony Scott’s action film Top Gun is a military-issue flight suit made of sage green material, with a long zip running down the front and adjustable waistbands fastened with Velcro at the hips. Zips and pockets are present along the legs, chest and arms. Padding is stitched into the shoulders, a design feature unique to the flight suits worn by Tom Cruise. A manufacturer’s label within is marked as size 38 Regular, and a length of cord is attached to one of the pockets to simulate the presence of the aviator’s safety knife. A napkin from a production catering company based in Burbank is still present in the chest pocket, suggesting this particular flight suit was used for interior cockpit sequences, which were shot using a custom-built rig at Burbank airport.

Part of the signature look of the naval aviators at the Top Gun academy was the array of squadron insignia seen on their flight suits, and Maverick’s flight suit is no exception. A Tomcat patch, worn by various F-14 pilots, is attached at the left shoulder, with United States Navy insignia on the chest and a patch for the VF-1 fighter squadron stitched on the right breast, with Maverick’s name patch is attached to the left breast with Velcro. 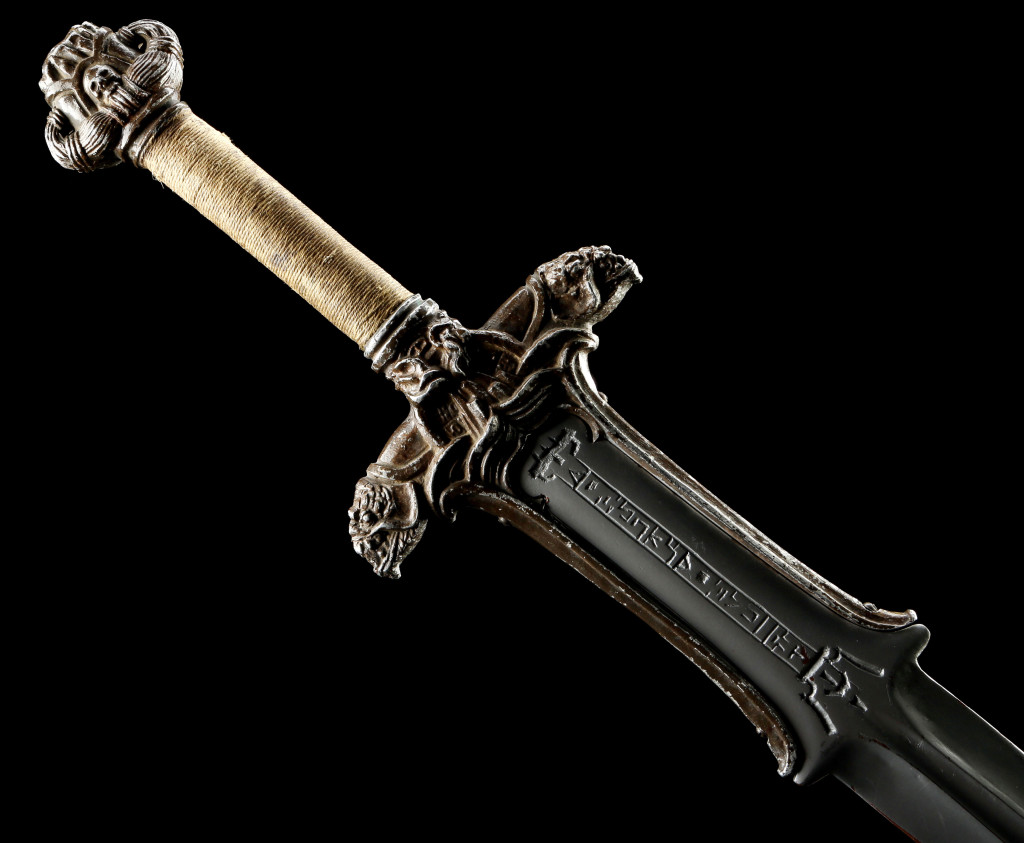 And last, but not least is Conan’s (Arnold Schwarzenegger) Atlantean rehearsal sword from John Milius’ fantasy epic Conan The Barbarian (1982). The Atlantean Sword was discovered by Conan in an ancient tomb and became the signature weapon of the Cimmerian warrior, used throughout the film in his battle against the Cult of Set and Thulsa Doom (James Earl Jones). This sword was used for actor rehearsals so as to not damage the hero weapons, or hurt other performers.

The Atlantean rehearsal sword consists of a wooden blade bolted into a long aluminium grip and handguard. The blade is painted silver to appear metallic and features ancient characters carved near the guard. The sword shows wear to the blade, which has chips on the sides from practice use, and includes a letter of authenticity from James Delson, a journalist who was gifted the sword while visiting the set for a story.