All of the Harryhausen items in the upcoming Prop Store Live Auction are very rare and may in fact be the only known production sketches in private hands, as nearly all of his work has been collated within the Ray Harryhausen Archive. These featured hand drawn pieces below, are an amazing insight into his design process, from rough sketches to tracing, to detailed sketch and then final key art. So, make sure you read on below to see what treasures will be going up for auction in Part 1 of our Harryhausen Feature…

In 1963 Ray Harryhausen produced what many people regard now as his masterpiece – Jason and the Argonauts. The most famous and well-remembered scene for fans of the film involved a lengthy and impressively intricate fight sequence between a group of live-action actors and stop-motion animated skeletons. From sketching to animation, the entire process for this one scene took over four months to complete – which shows the amazing amount of time and effort that Harryhausen had to go into to bring to life his work. In the below two examples, you are able to clearly see his art process – from a simple tracing, to detailed sketch – for the skeleton fight scene in Jason and the Argonauts. Harryhausen wanted the skeletons to have a sense of being an organised and well-drilled enemy, thus keeping them in strong formations throughout the animation period. 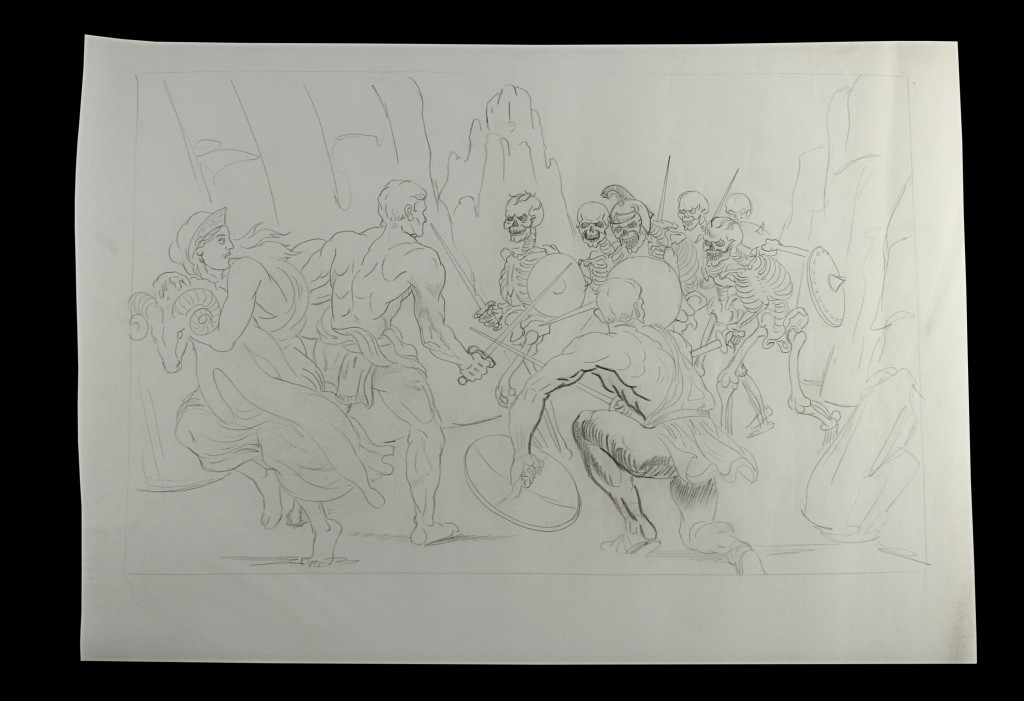 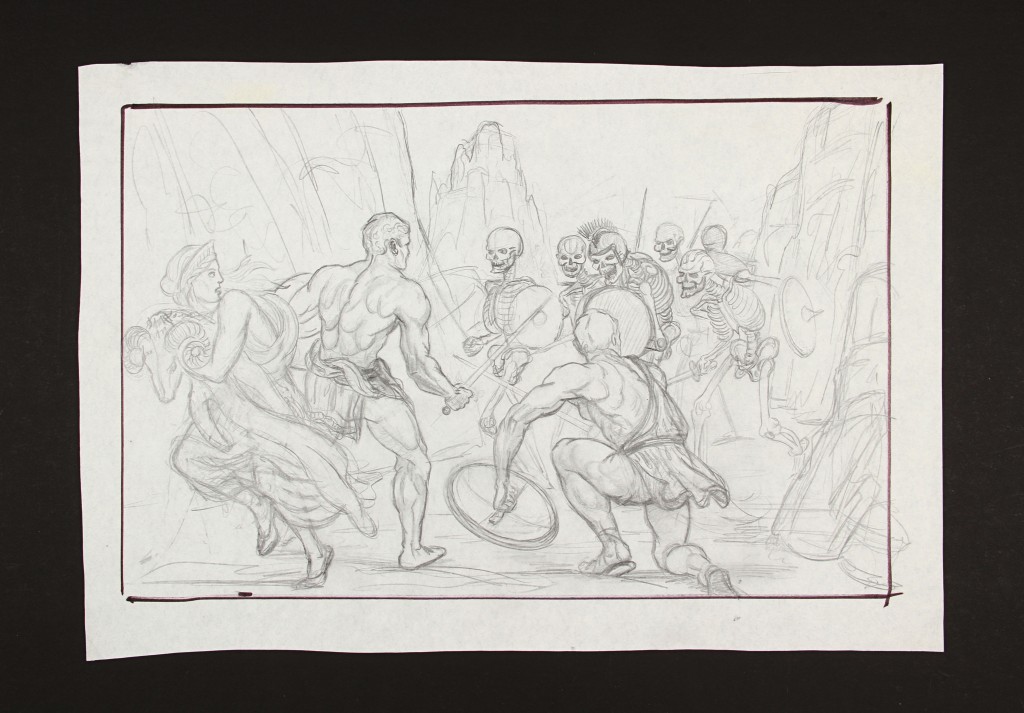 Other artwork lots included in the Live Auction collection from Jason and the Argonauts include sketches from memorable scenes such as Talos’ awakening and Triton helping the Argonauts by holding back the rocks long enough to let the Argo pass through. It is interesting to not that the images of Talos were transposed almost identically into the final film, with the only real change being the addition of a helmet and sword. 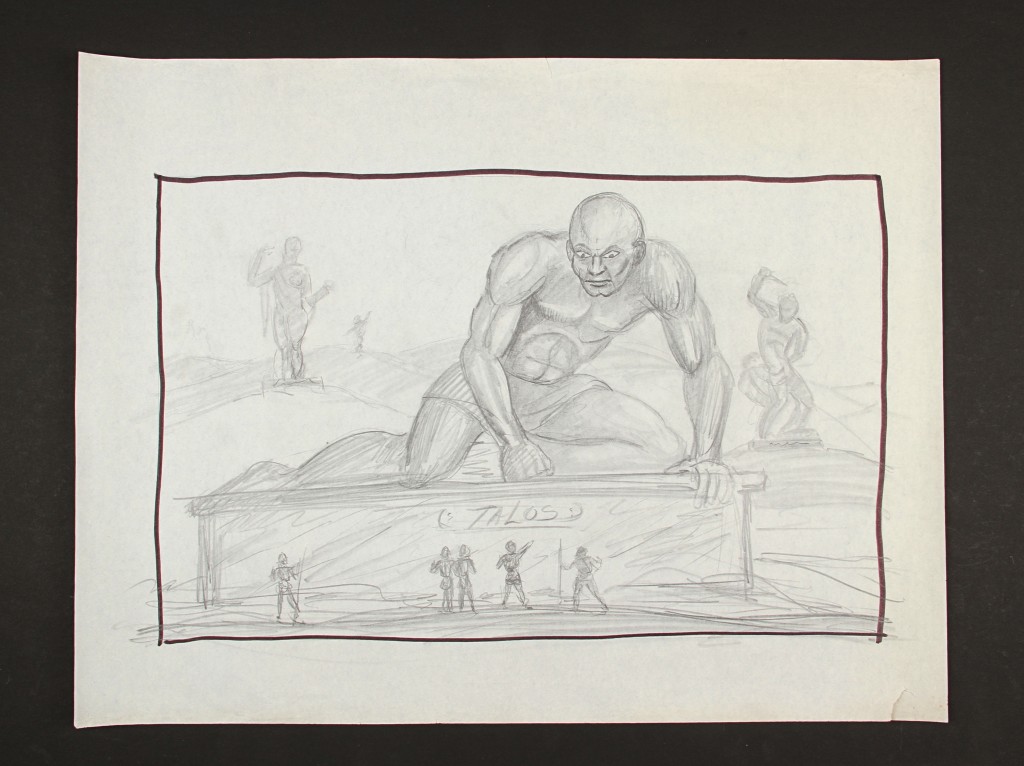 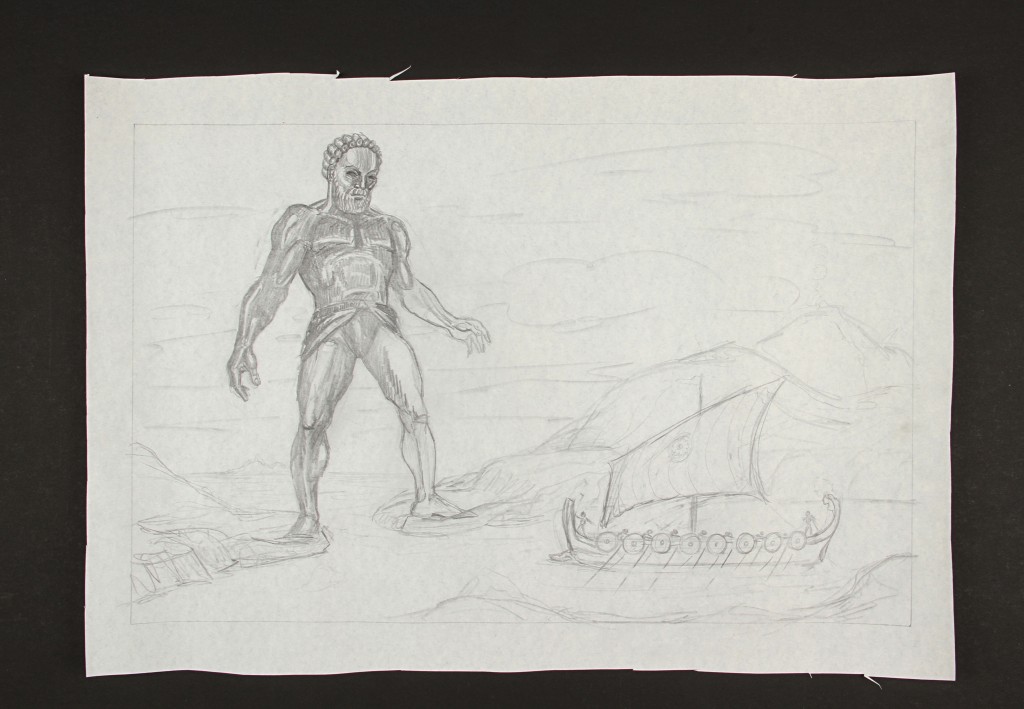 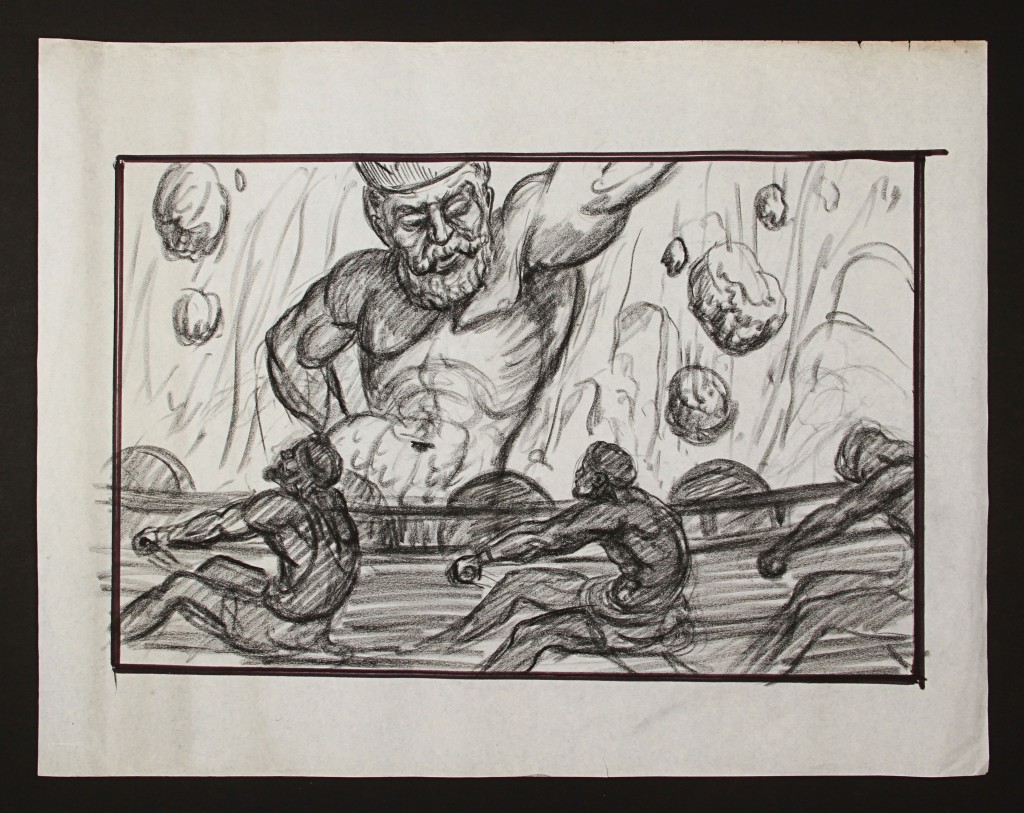 Another amazing Harryhausen-created creature featured in Jason and the Argonauts, is the Hydra. The sketch below shows Jason, sword in hand, advancing on the mythical seven-headed serpent. It is executed on white paper in pencil, with red pencil highlights added to clearly define the beast. This piece is the only colour image in the Live Auction collection of Harryhausen artwork, as he was rarely known to use colour. This detailed sketch is an amazing example of Harryhausen’s great attention to detail, but also his skill as an exceptional concept artist. 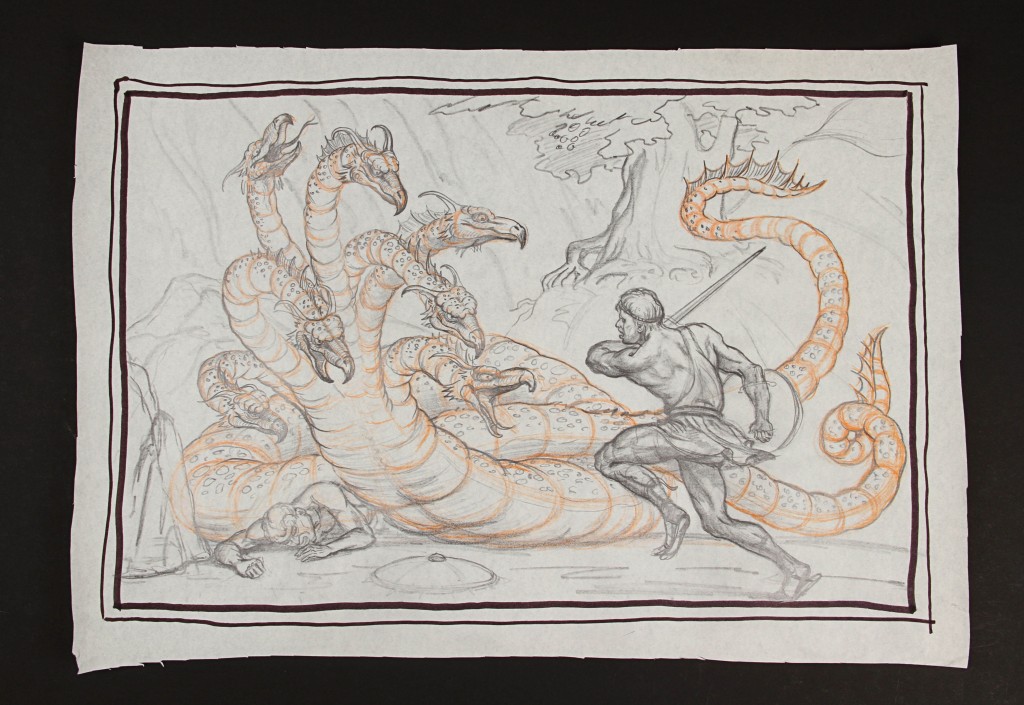 KING OF THE GENIIS (Unmade Project)

King of Geniis was the Sinbad sequel that never was. It incorporated both Mayan and Eastern influences and dinosaurs, with the early proposed title Sinbad’s 3rd Voyage. As part of his routine, Harryhausen would often create an idea for a movie through such early pre-script sketches, as it helped him refine the essence and look of the film. In the hand drawn sketches below, you can once again see his distinctive style and exceptional talent in bringing his imagination to life on paper. And since the film never came to fruition, there were only a handful of sketches made for this film – three of which we are lucky enough to have in our upcoming Prop Store Live Auction, this September. 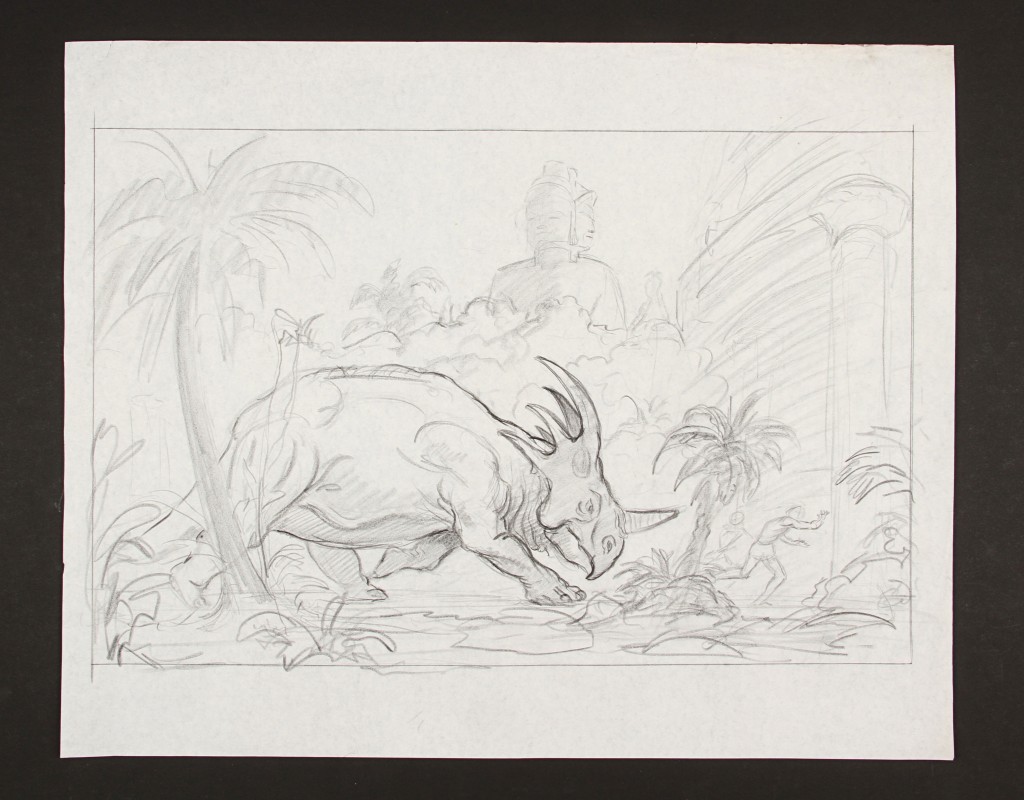 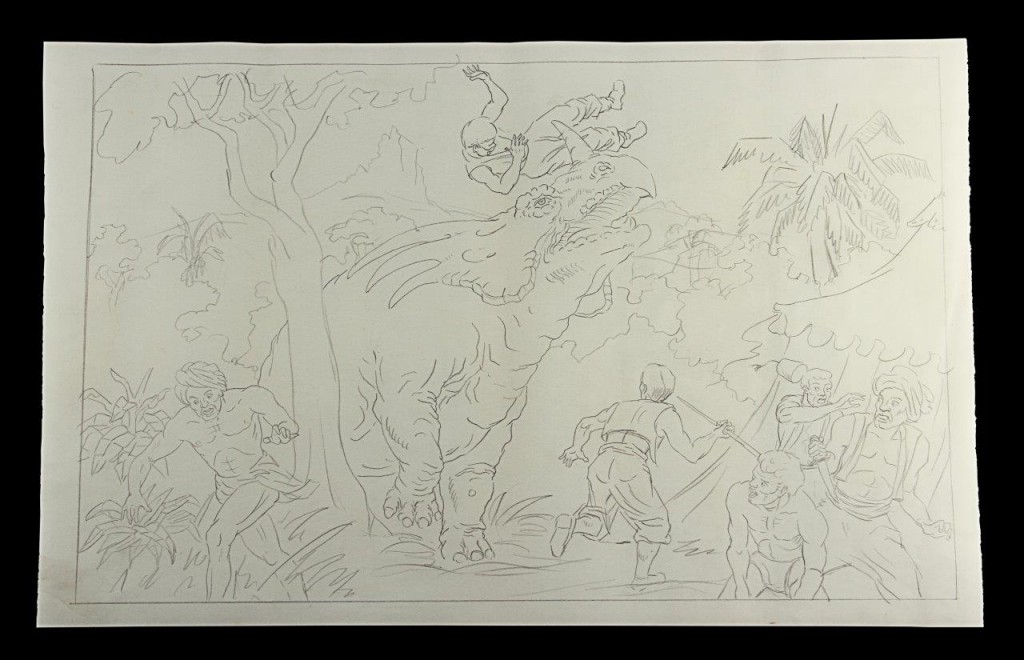 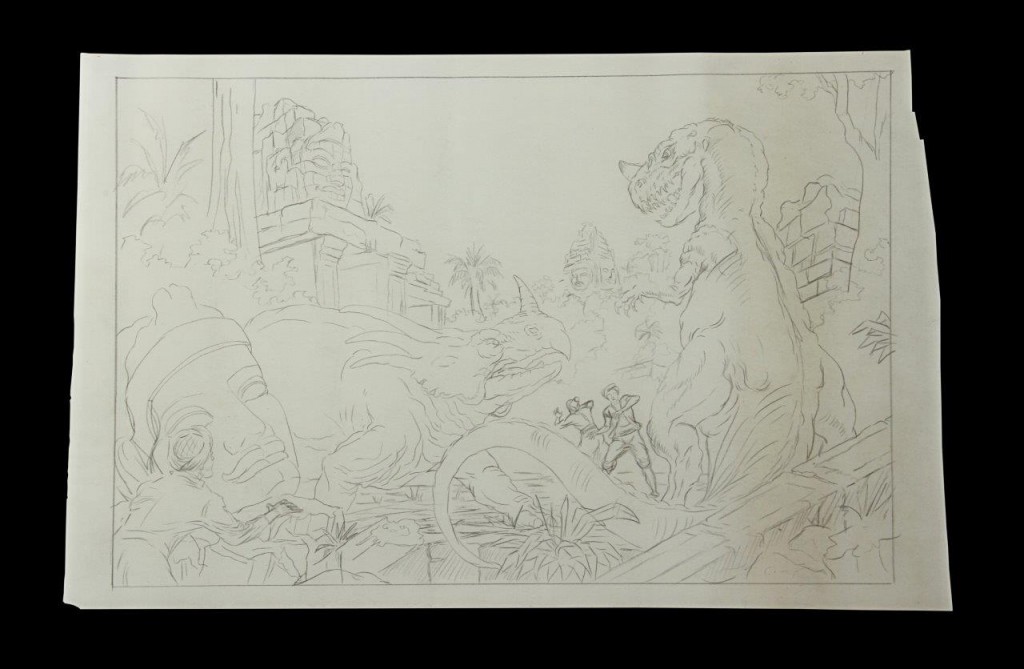