The next morning, the group met with their guides—Terje Olsen and Erling Nesbo. Terje has been around Finse all of his life, though he was too young to be involved with the filming of Empire. Erling, however, worked on the production of the film. As Erling did not speak English (and the expedition did not speak Norwegian), Terje served as the group’s protocol droid and interpreter. He provided the expedition with Erling’s specific curriculum vitae with regards to his work on EMPIRE.“[Erling] was the head of security, and transport, and things like that. Most of the people who stayed here at the time were extras in the film. His sister, and brother-in-law were extras.” They showed Erling their reference photos and Erling seemed to recognize the majority of them. It was a promising start. 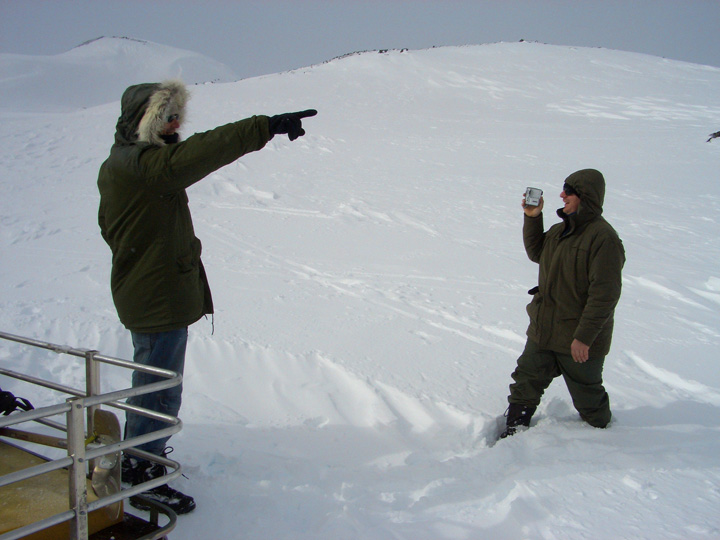 Terje had to obtain special permission to take the expedition up to the Hardangerjøkulen glacier, as it is a national park. Tourists cannot travel to the glacier without a local guide because the snow-covered crevasses make the journey very dangerous for the uninitiated. The Norwegian guides had also secured a pair of Tauntauns (snowmobiles) that would take them up to the glacier. Andy rode on the back of Terje’s snowmobile and Stephen rode with Erling. With the snowmobiles only seating two, Brandon was relegated to the towed cart attached to Erling’s snowmobile which had a six-inch foam sheet that masqueraded as a seat. A Finse-style luxury caboose. Riding shotgun with Brandon was a large shovel, which he assumed was as good a traveling companion as any in the mountains of Finse. “Hold on,” Terje suggested as the engine roared to life.

Suddenly, the high-pitched wine of their snow-speeders’ thrusters slammed them back in their seats (and their luxury cabooses) and they were off! The group sledded South, across the frozen lake behind the hotel and along the trail that ascends to the glacier. The trail was delineated by no more than large stakes driven into the snow pack. While things got bumpy in the back, the snowmobiles were quick and agile, never once slipping—even on a trail composed entirely of snow and ice. The vacationing cross-country skiers soon vanished behind them, and they gradually disappeared up into the mountains. 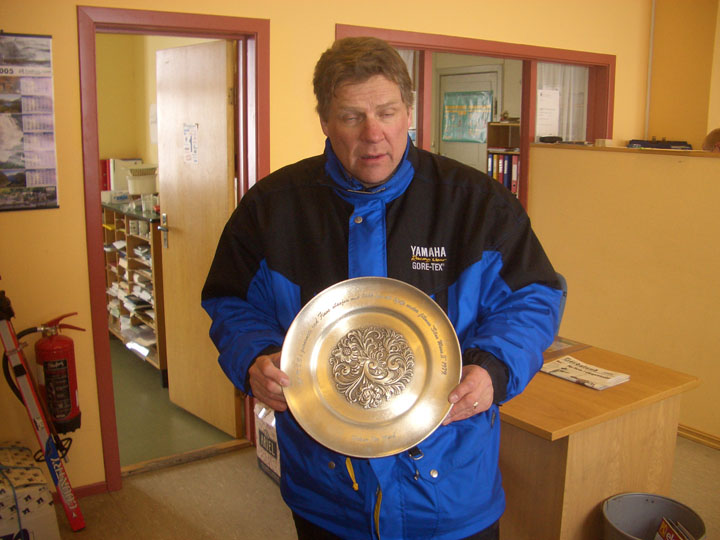 Looking around, they saw Hoth as it surely looked when the rebels scouted it for their secret base. Pure white snow rolled away from them in all directions, broken up only occasionally by the black understructure of a mountain or a lone rock formation that had been swept clean by the wind. Even protected under hats and goggles, the arctic cold still found and stung any exposed patches skin. As Brandon’s eyes scanned the horizon for anything that might match our photos from the film, he felt that the group had a daunting task ahead. The terrain seemed endless and repetitive. It was a snow-swept vista, which was at once ever changing and ever the same. How would they ever be able to find one specific mountain grouping in all of this?

The snowmobiles came to a stop at their first destination, and the expedition hopped out of their carts. Terje and Erling said that some of the filming had been done here. Thumbing through their stack of photos, the group struggled to match anything up. But the vistas certainly were beautiful. Brandon, Stephen and Andy snapped a few photos and were soon back on the move. As they rode further from the hotel, Brandon felt a true sense of isolation setting in. There was no evidence of human presence for miles and miles, and he was sure this place looked no different now than it had before humans even existed. It was no wonder that the Empire crew chose this place to represent a remote world in a far-off galaxy. As the group came to a halt once again, Terje informed them, “this is the place from the photos.”

Erling asked to see the images once more, and had a brief conversation with Terje in Norwegian. Terje told them that they were at the correct spot, but the mountains were currently hidden by a heavy cloud cover. The group was frustrated. Their highest priority was getting a photograph of the three of them in front of those elusive “Hoth mountains.” Here they were, potentially in the correct spot in an expanse of endless, snow-covered Norwegian plains, and what they wanted to see was obscured by fog. The group hiked around the area a bit, where they would sink up to their knees in snow. They searched for any evidence of a film production on this site twenty-five years earlier. Soon, as if through the power of the Force, the group saw the gray clouds lift. They could suddenly see mountains precisely where Terje and Erling had said they would be! 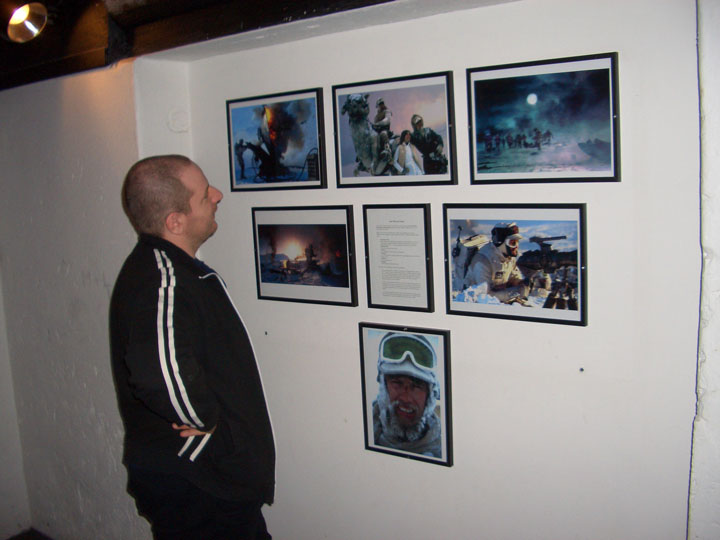 Things were looking up and now, so was the expedition.

They stared up at the towering mountains, willing the clouds to continue to lift. Sure enough, the clouds ascended higher and higher and the mountains came into focus, as watching a Polaroid develop: gray, then opaque, then suddenly clear as day. The group converged and began examining their reference photos, looking for visual evidence that would confirm this was the spot they were looking for. As they searched through their research materials, Brandon remembered the saying that Robert Watts and Norman Reynolds had for when they settled on a location during a scouting trip: “I can smell the bacon and egg sandwiches” (a traditional breakfast of British film crews).

When they compared their photos to the landscape, Brandon was sure that he, Stephen and Andy were certainly smelling the sandwiches now. Or it could have been delusion brought on by the early stages of hypothermia. Either way, the mountains that lay before them matched the screen captures from the film perfectly, even down to the patterns where the black rock formations were peaking through the snow.

The smell of imaginary bacon and egg sandwiches soon gave way to the triumphant scent of victory. Thousands of miles from home, among an immeasurable number of snow-covered mountains, two Norwegian guides had brought Brandon, Stephen and Andy to the ice planet Hoth. Brandon smiled with immense satisfaction, and pulled out his GPS locator to lock in the coordinates, this being a tradition among location hunters when they found where “X” marked the spot. The group then spent several minutes snapping photographs of the mountains only to look up and find that they were gone again, vanished as if they were just a faint memory. The cloud cover had returned just as quickly as it had lifted. The group marveled over how different the area looked with and without the fog and could only imagine this natural obstacle being continuity-hell for the film crew. 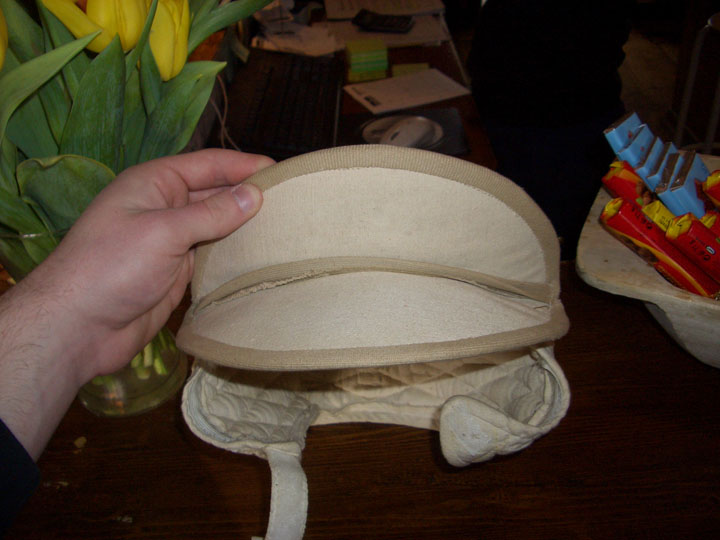 The adventurers spread out to conduct a thorough search of the area and prospect for any evidence of the film’s production in 1979. Aside from a few unidentifiable pieces of aluminum rod, they came up empty. Terje and Erling had a laugh at the foreigners’ naiveté. Terje told them that during the second World War, the Germans had attempted to build an aircraft landing strip on top of the glacier. After they actually managed to land an airplane on the glacier, it tried to take off again in the arctic conditions only to crash and be forever lost on the glacier and to the ages. Terje and his friends had spent some time looking for the plane in their youth, but had no luck. If this hostile landscape was capable of swallowing up an entire aircraft, the group reckoned that their chances of coming across an errant lightsaber forgotten in the snow were slim.

The adventure wasn’t quite over yet. The group’s Norwegian guides still had a few things to show them, and several minutes later, they were once again back on the snowmobiles and back on the move. The next stop was an area of the glacier where blue ice had been exposed. The gleaming purity of ages-old ice shining through the snow was an awesome sight to behold, indeed, and a reminder why this place was chosen for its visual awe and ability to appear as a place not of this Earth. From here, the expedition carefully proceeded through an area fraught with many crevasses to a high point up in the mountains, from which the town of Finse is barely visible. Aside from these buildings, it was solid white snow and mountains as far as the eye could see.

It was pure, frozen Hoth-beauty in every direction.

On the way back to the hotel, the group pulled out a photograph taken of the film-unit in front of the Finse1222 in 1979, which was later published in a (now vintage) issue of American Cinematographer magazine. They lined up a similar shot from their own research unit and snapped away. The moment served as an excellent capper to the location hunters’ successful recce up in the Norwegian mountains. 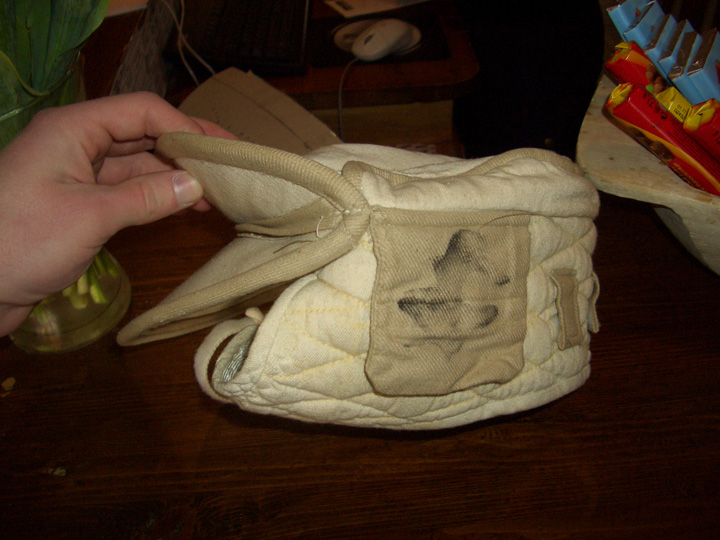 The adventure was coming to a close, but there was one final stop. Stephen, Andy, Terje and Brandon waited in the lobby as Erling retrieved a silver plate from the wall. This commemorative decoration had been gifted to the hotel in thanks for their support of the shoot. Terje translated the Norwegian inscription on the plate, which read:

To the people of Finse, thank you for your help in the filming of Star Wars II. –Per Mork.

Per Mork was a Norwegian film technician responsible for much of the set construction on the film. With the adrenaline rush of their Hoth tour wearing off, the expedition began to feel the effects of having been out in the sub-zero temperatures for several hours. They retreated to the hotel to seek out dry clothes and hot chocolate. A glance at the thermometer yielded the external temperature: a chilly six degrees Celsius. It was cold. But luckily, the group had a warm hotel to sleep in that night rather than the innards of a frost-bitten Tauntaun.

That evening, the expedition enjoyed their victory in the hotel restaurant and bar, chatting with the hotel staff and its sparse guest roll. All efforts to explain what they were doing in Finse were met with what essentially amounted to blank stares, though everyone was very friendly and in good spirits. A few of the hotel guests had seen the STAR WARS films, but snowboarding and skiing seemed to win out over location hunting as the most popular local leisure activities.

The next morning, the group bid farewell to their new friends and boarded the train for the four-hour return trip to Oslo. This ride was spent taking in the gorgeous Norwegian scenery and reminiscing about their incredible weekend. It was an amazing experience to visit a location that had before only existed in their imaginations. And it was not something they’d soon forget.

“There’s nothing there.” Phillip Kohler’s warning echoed in Brandon’s mind as their train sliced through the Norwegian landscape on its way back toward Oslo.

Essentially, Kohler was right. But that’s exactly why the production had chosen this place to serve as Hoth twenty-five years earlier. And it’s also why Brandon and his fellow location hunters were thrilled to behold Finse’s beautiful nothing for themselves.