Mario Kirner’s love for cult horror franchise Friday the 13th goes all the way back to his childhood in the 1980s. To his 13th birthday, appropriately enough. The German collector has, over the decades since, amassed the world’s most impressive selection of Friday the 13th props and costumes – most of them screen-matched – gathering them into his own online museum.
As that collection’s choicest (and bloodiest) items go under the hammer in Propstore’s Live Entertainment Memorabilia auction, we speak with Kirner about how he turned his passion into a true horror showcase.

Where does your love for Friday the 13th originate?

When I grew up in the ’80s, my parents had an extensive collection of ex-rental VHS cassettes, which included quite a selection of horror films. However, at first I was not allowed to watch them, so I just secretly checked out the cover artwork, coming across all these gems from the ’70s and early ’80s, like Friday the 13th, Piranha, Jaws and so on. It wasn’t until years later that I first watched Friday the 13th – when I was 13, by the way. Part VI was my entry into the series, and it immediately had a great effect on me and my future collecting habit. 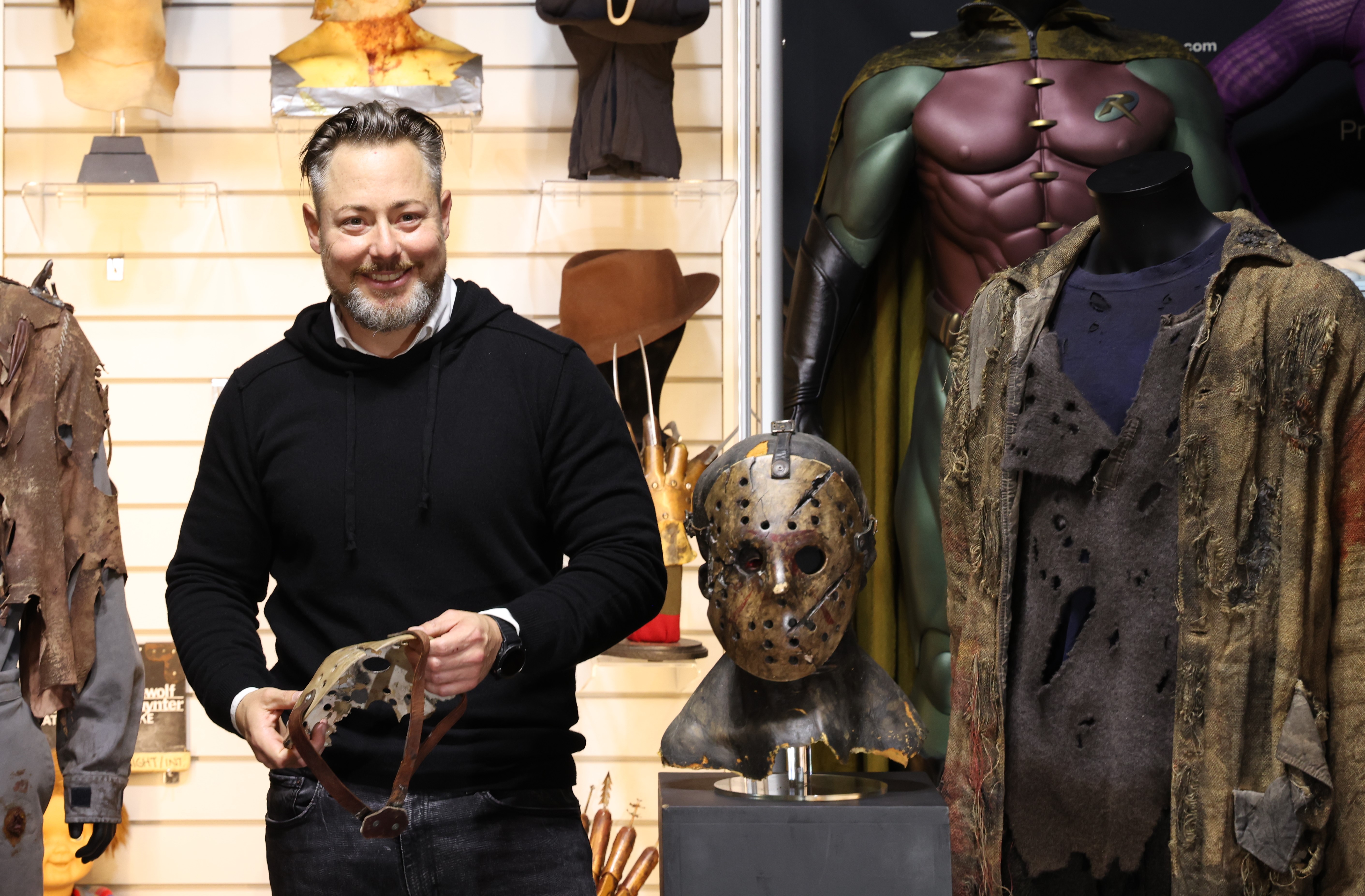 Prop-wise I would say Part 9, Jason Goes To Hell. KNB EFX did a wonderful job on the costume and make-up, and it had some great props, like the demon dagger (included in this auction) and of course the Necronomicon. This film has something for all kinds of production collector, even miniature effects and a monster towards the end. But when it comes down to my favourite film in the conventional point of view, I would say it’s the already mentioned Part VI. Jason gets resurrected in this part, so the story starts all over again, with him as a zombie. 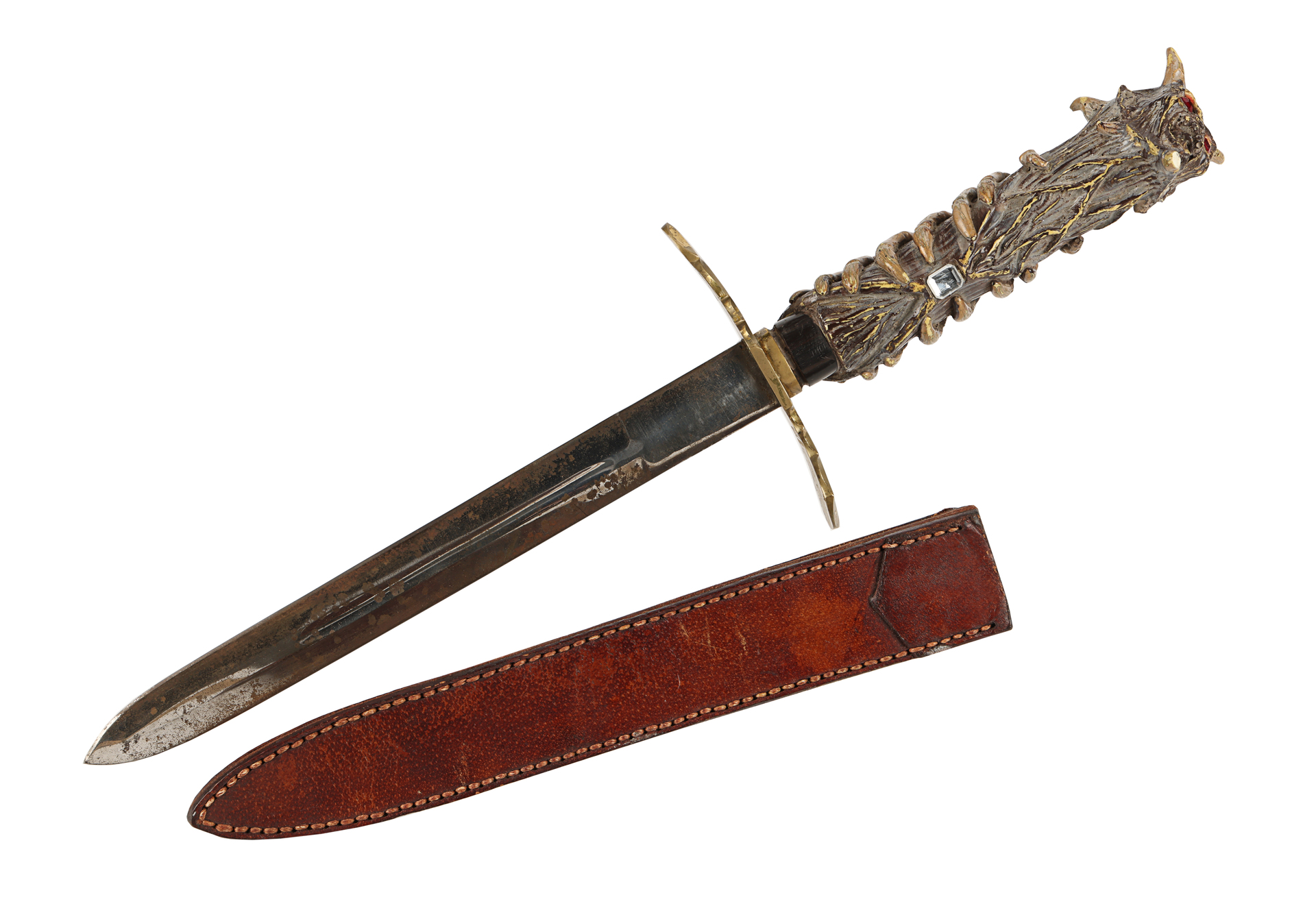 How did you go from simply being a fan to a collector?

I’ve always been a collector. As a kid I collected Masters of the Universe figures and merch; later on everything that was connected to Bruce Lee. My Dad was a martial-arts master back in the ’70s and ’80s and had loads of Bruce Lee-related stuff that I discovered in our attic. At the age of 12, I started collecting everything related to The Terminator and A Nightmare on Elm Street, and finally added Friday The 13th when I was 16. My bedroom looked like a video store, or something you’d expect when entering a movie-merch shop on Hollywood Blvd!

What was your first Friday the 13th piece?

The Jason Goes To Hell replica mask from Cinema Secrets. I ordered it from a catalogue and waited over two months for it to arrive. That was back in 1997. For the first screen-used piece, it was the exact same item again, just this time used during production: the hero hockey mask from Jason Goes To Hell. That was in the early 2000s. 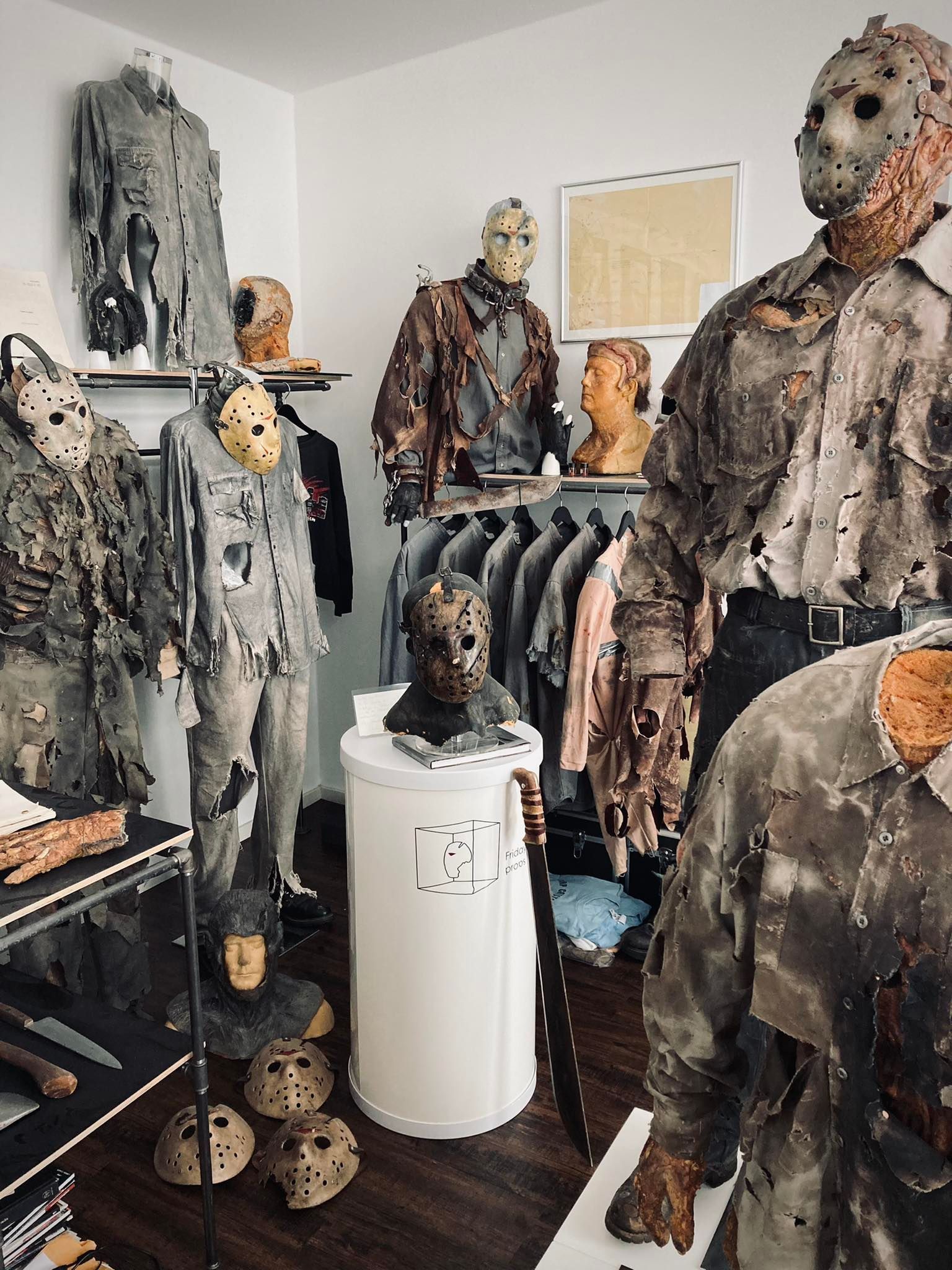 Was it much harder finding items from the early films?

Yes, definitely. There’s simply not much around from the early ones. Things were thrown away and the quantity of items was limited from the beginning. The only movie that seems to have a couple cool pieces still around is Part 4, since FX master Tom Savini kept quite a few items and sold them over the years. Among these is the Jason torso that was stabbed, and a few other bits and pieces. From Part 1, I know of only two items that survived. Pamela Voorhees’ decapitated head (as kept by Savini, who worked on this one) and a Bikini worn by one of the actresses. The one piece from the earlier films that I own is the yellow hippy shirt worn by Chuck; you can find it in this auction. Later, during the 2000s when the official studio auctions began, ranging from Jason X, Freddy vs Jason and the 2009 remake, it was much easier to get your hands on some of the cooler stuff. And those pieces even came with a nice-looking studio certificates of authenticity. I won a few items from those auctions, and also got some pieces directly from industry sources. 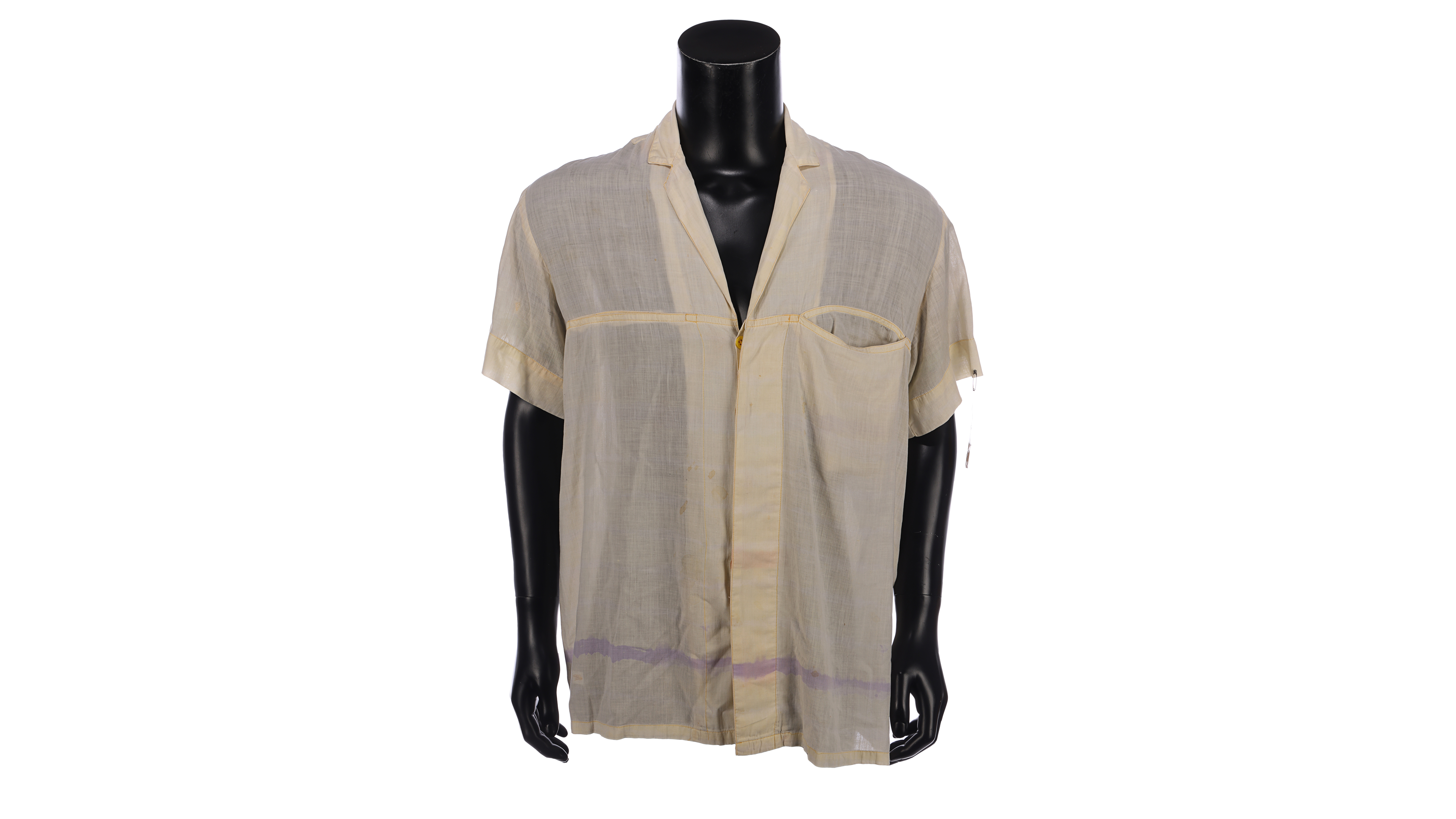 What kind of contact have you had with the Friday the 13th filmmakers over the years?

I’ve made contact with many people who worked on the films: Actors, FX people, prop guys and even directors. I’m happy to say I still chat with some of them in a regular basis and occasionally meet up in person. The more popular names that should be familiar to fans are Kane Hodder, C.J. Graham, Ken Kirzinger, Douglas Tait and Markus Nispel. But even more interesting to a collector are contacts like Brian Rae, Scott Stoddard, Koen Wooten, Al Magliochetti, Robert Kurtzman and Tom Savini. They all helped out a lot when I published my book, Friday the 13th Props Museum – The Collection of Mario Kirner. They generously provided not only never-before-published production photos, but also some awesome behind-the-scenes stories. 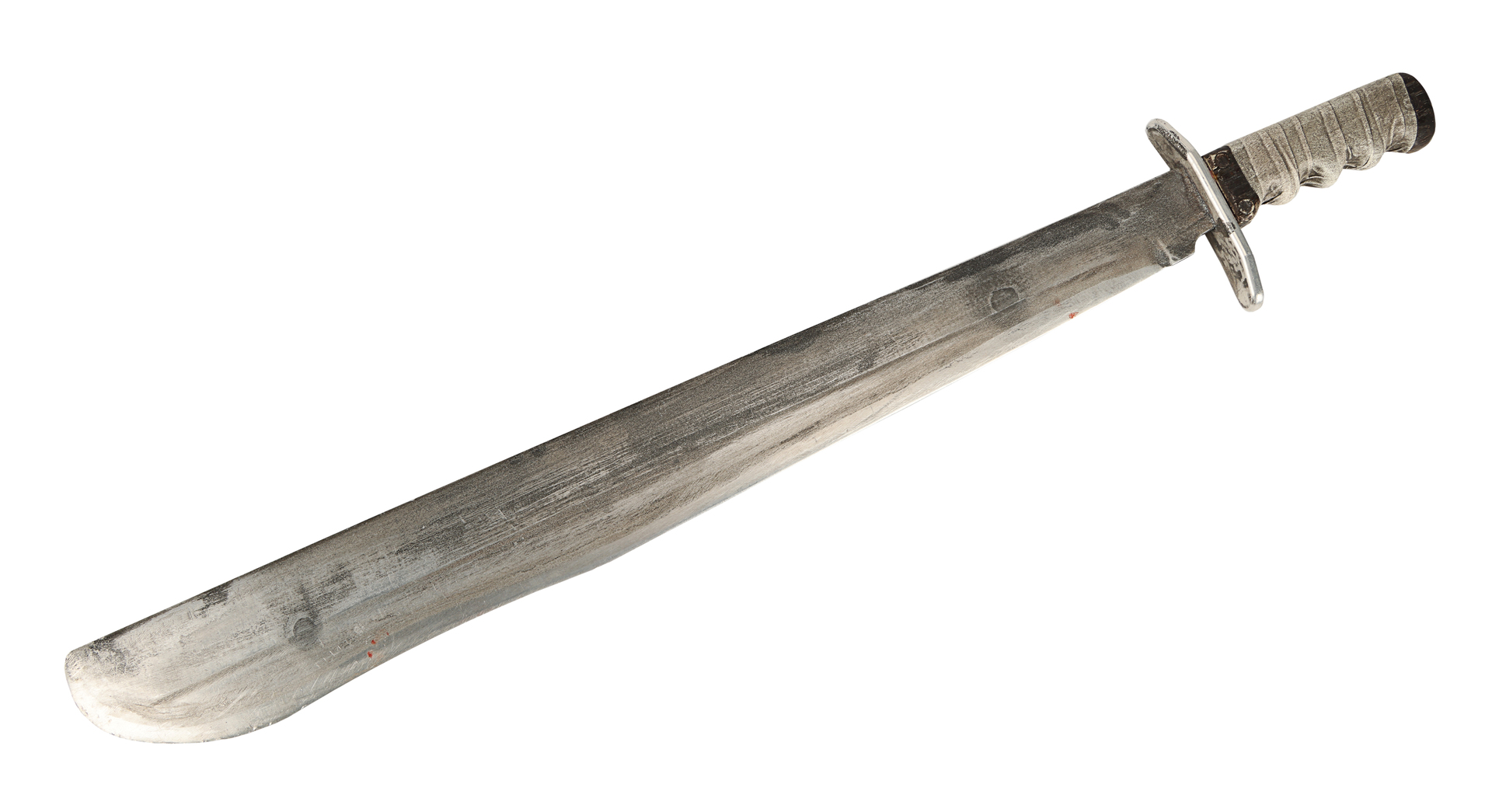 Tell us about how you established your Friday The 13th Props Museum?

That was an organic process. After the collection grew to a pretty decent size, I decided to create a website to share with other collectors and fans. That was back in 2007. But the museum’s content was strictly in private hands and not a real location that fans could visit. In 2017, I planned to have the full content of the collection go public and I contacted both the film museum in Berlin and also the one in Frankfurt. However, both declined to have the items on loan or on display. Of course, I was pretty disappointed, so I came up with the idea of creating that coffee-table book that finally published in 2018, which found great resonance among the F13 community and prop collectors. 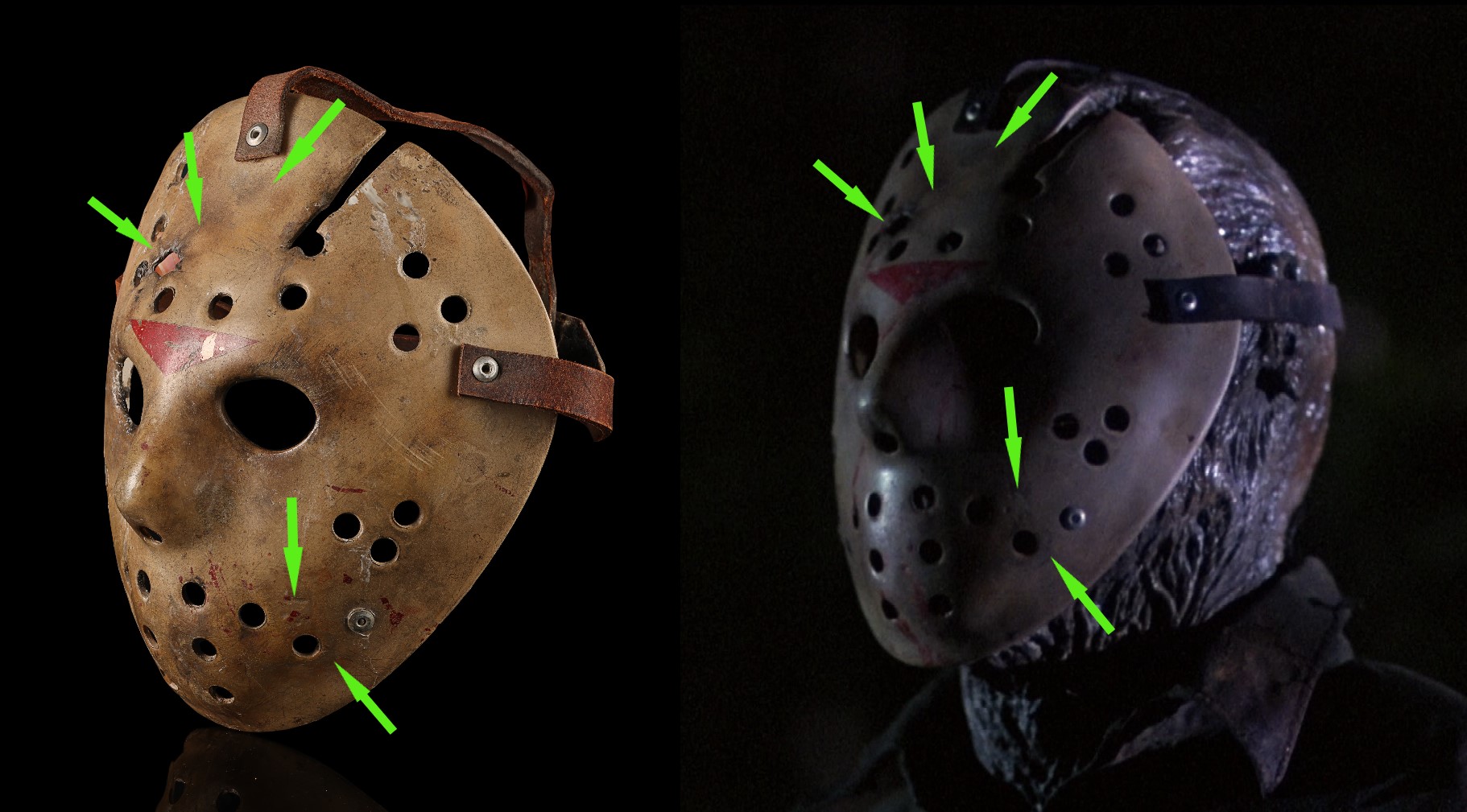 What kind of response have you had to the museum over the years?

Probably one of the proudest moments was when propmaster Koen Wooten contacted me. At that time he was in pre-production for the 2009 remake and was using my website and its content as his main resource while creating the props for the new movie. Another pretty cool story was when video-game developer IllFonic contacted me in 2017 to ask if I wanted to work on the official Friday the 13th game, published by Gun Media. My job was to provide details about the costumes, masks and props and help them improve visual details like colour-correction of certain characters and props. If you check out the game, you can find newspapers lying around the camp, with the headline: “Mario Kirner Opens Props Museum.”

A selection of items from Mario Kirner’s collection

What’s your favourite memory of curating the museum?

It was always a blast when I obtained the cream of all F13 props: a hockey mask. Altogether, there were 10 masks in the museum. Receiving and taking them out of their shipping boxes were such magical moments for me. Very hard to describe. You can’t see the rear sides of the masks on screen, so this was always the very first thing I did: turn them around and see what they looked like. Usually, completing a costume from boots to mask took me years: the process of tracking down the components, working on the initial owners to let pieces in question go, obtaining them. I could sit in front of a finished display for hours, just looking at it. 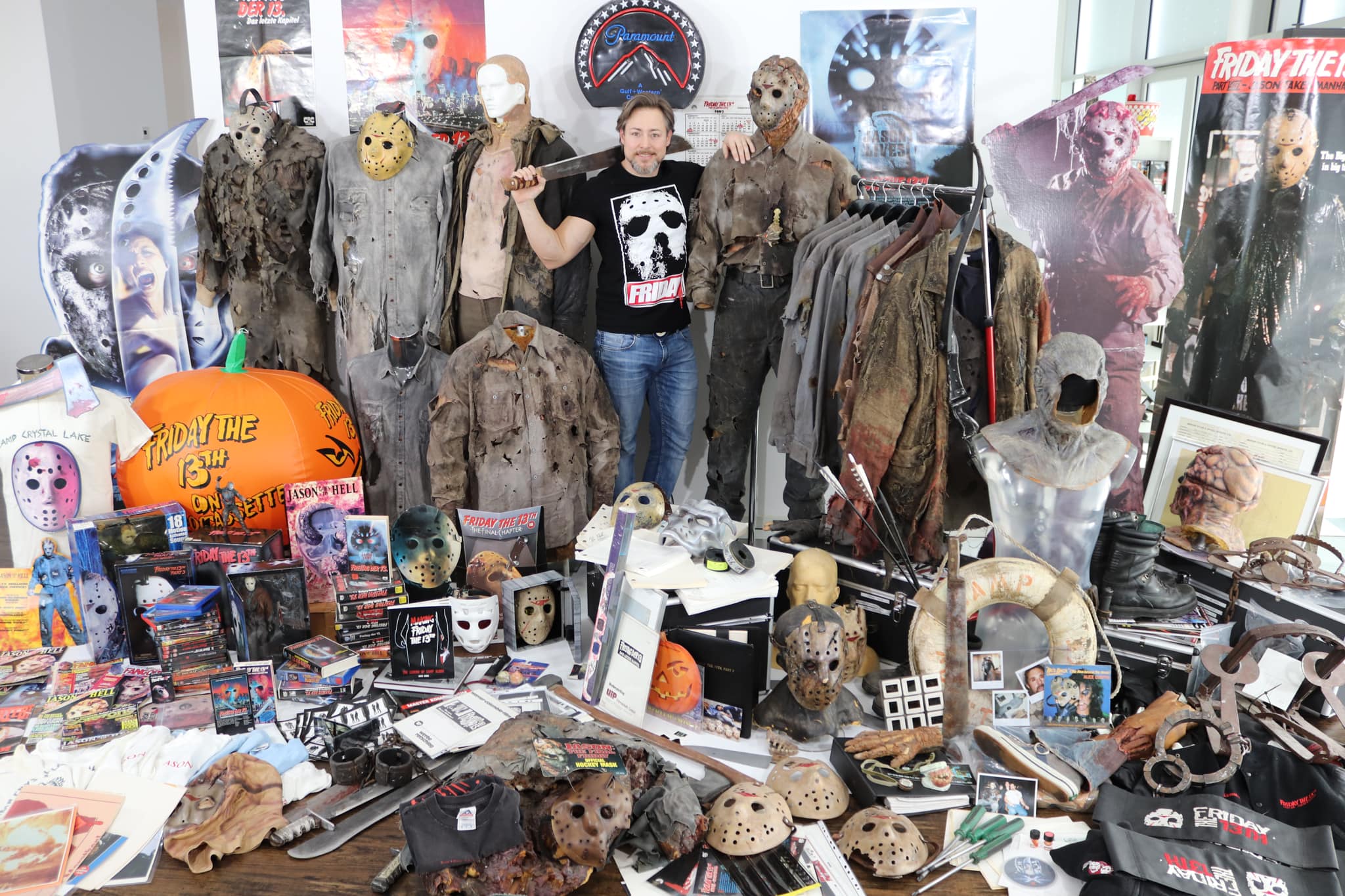 Why was it time to move on from the museum and share your collection with the world?

My focus in life changed with a family and becoming a dad of three, and running a big business. Maybe coronavirus and the financial situation had their impact, too. But this creates an amazing rare opportunity for collectors to own such a great selection of well-documented and authenticated Friday the 13th props. The work, effort and enthusiasm of 25 years is now being served up on a platter. Enjoy and take a bite!

What’s your favourite piece that’s up for auction?

I think the shirt from Jason Goes To Hell. This piece is just awesome! I feared it was just thrown away after production wrapped. But then I got in contact with the head of the FX moulding and casting department over at KNB, and he still had the Jason dummy that was used during the stabbing scenes towards the end of the movie. When I received the dummy a few weeks later, I was blown away when noticed it was wearing the main hero shirt that I’d been after for so long! It screen-matches perfectly, and you can see it in countless behind-the-scenes pics and promotional material as well. 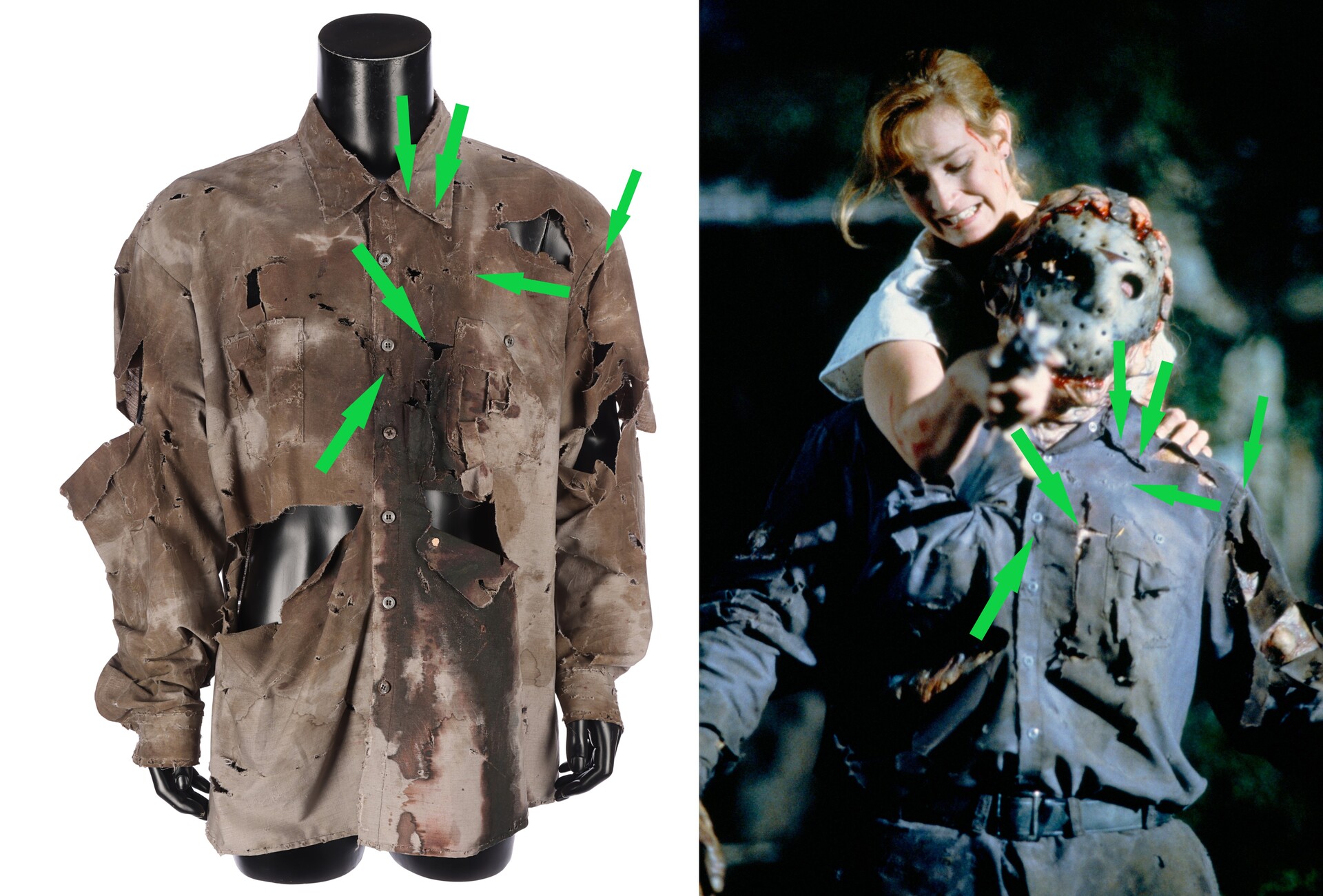 Why do you think the series remains so iconic and beloved?

I think it has to do with the fact that new movies came out on a regular basis, especially during the ’80s. Many generations grew up with these movies, and F13 and the Jason character became a trademark in horror – a popular-culture phenomenon. You can find hints of Jason and the F13 trademark everywhere.