At a time when practically every movie screen has been taken over by a big-budget superhero film, it is easy to forget the genre’s humble beginnings. The first onscreen superheroes came in the form of low-budget movie serials, which eventually evolved into syndicated television fare, with George Reeves’ Superman chief among them. Chief, that is, until January 1966, when a single series changed the genre – and pop culture – forever. 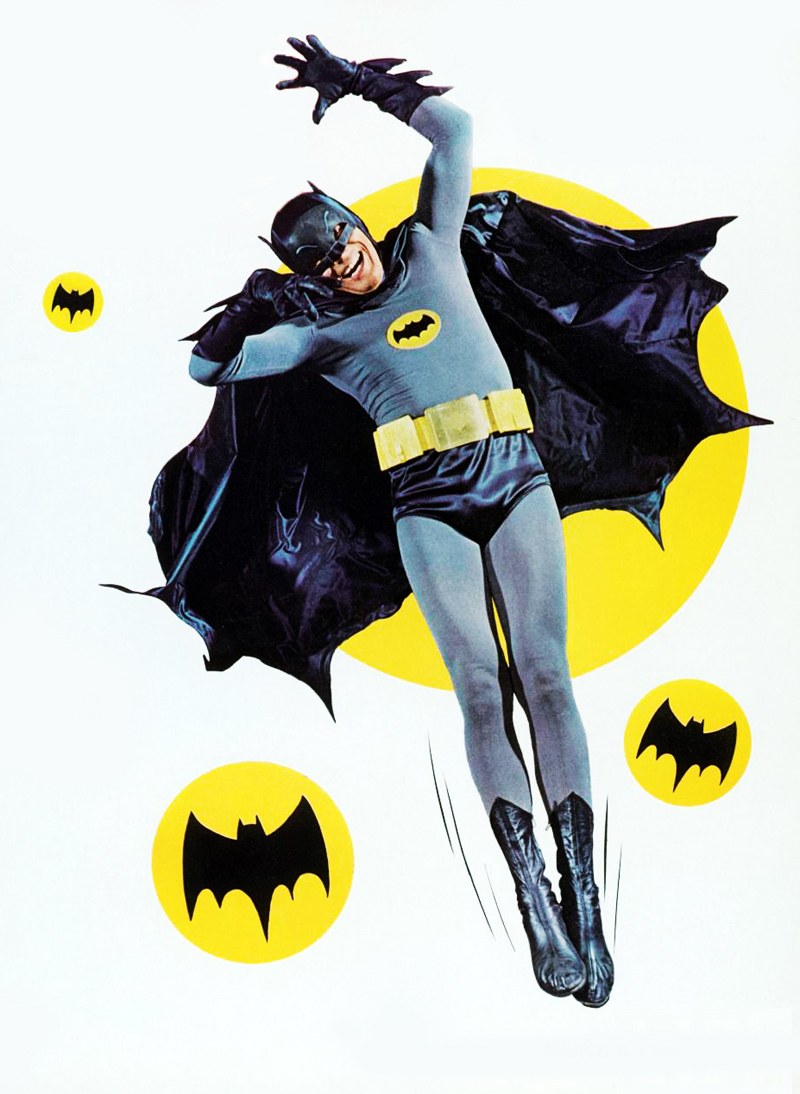 Batman was unlike anything that came before and, despite a slew of imitators, anything since. The show’s sharp comedy and bombastic action brought both adults and children under its thrall for three seasons on ABC and has proved a powerful combination for cultural staying power.

Along with its high-farce writing and a slew of incredible performances, Batman is remembered fondly for the Pop Art-fueled world of its Gotham City. Sets, costumes, props, vehicles, pill boxes… nothing was safe from a bright coat of paint and a neatly lettered label. But despite the hundreds of unique props created for the series, very few original pieces remain. The entertainment industry, television especially, placed little value on the items we now see as treasure, going so far as to destroy the Batcave and other famous sets immediately after the series was cancelled. 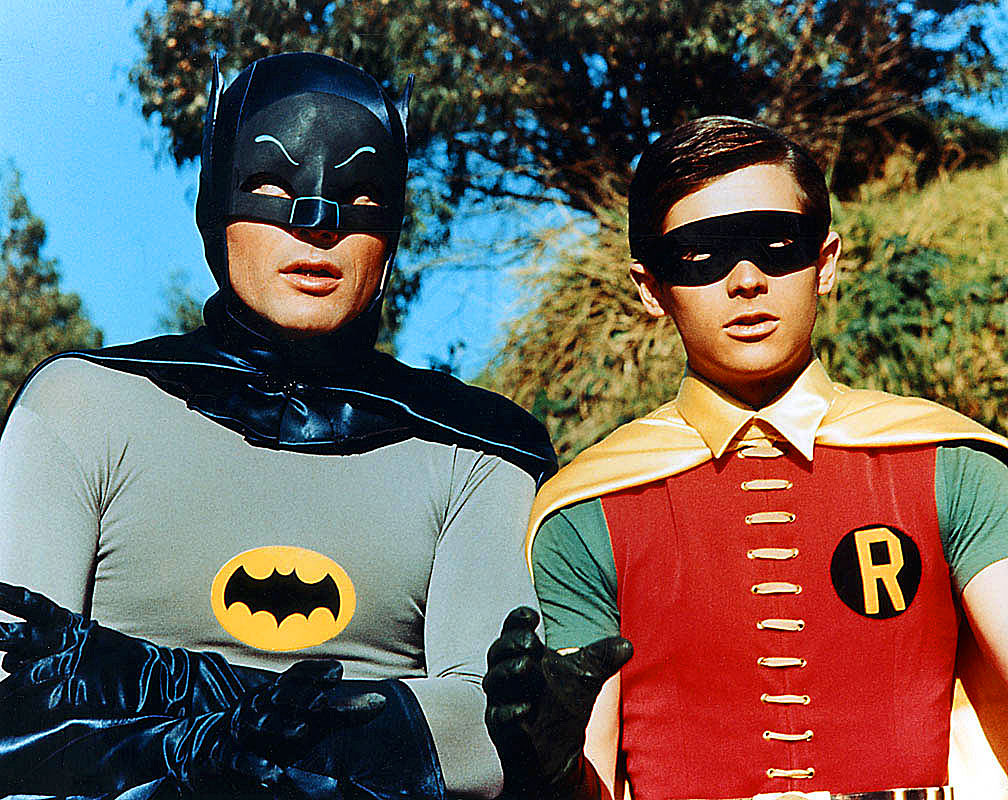 Thankfully though, a few pieces slipped through the cracks. Now, the Comisar Collection has included some of the most immaculately preserved Batman pieces we have ever come across in the TV Treasures Auction. Power on your atomic batteries and take a closer look at some of the highlights!

While the Joker reigns supreme as Batman’s archnemesis in the comics and most adaptations, it was Frank Gorshin’s Riddler who many would argue was the Caped Crusader’s main foe in the series. The first principle actor seen on screen in the pilot episode, Gorshin became famous for his portrayal of the Riddler and recurred often throughout all three seasons of the show, Batman: The Movie, and even a much-maligned superhero roast special in the 1970s. 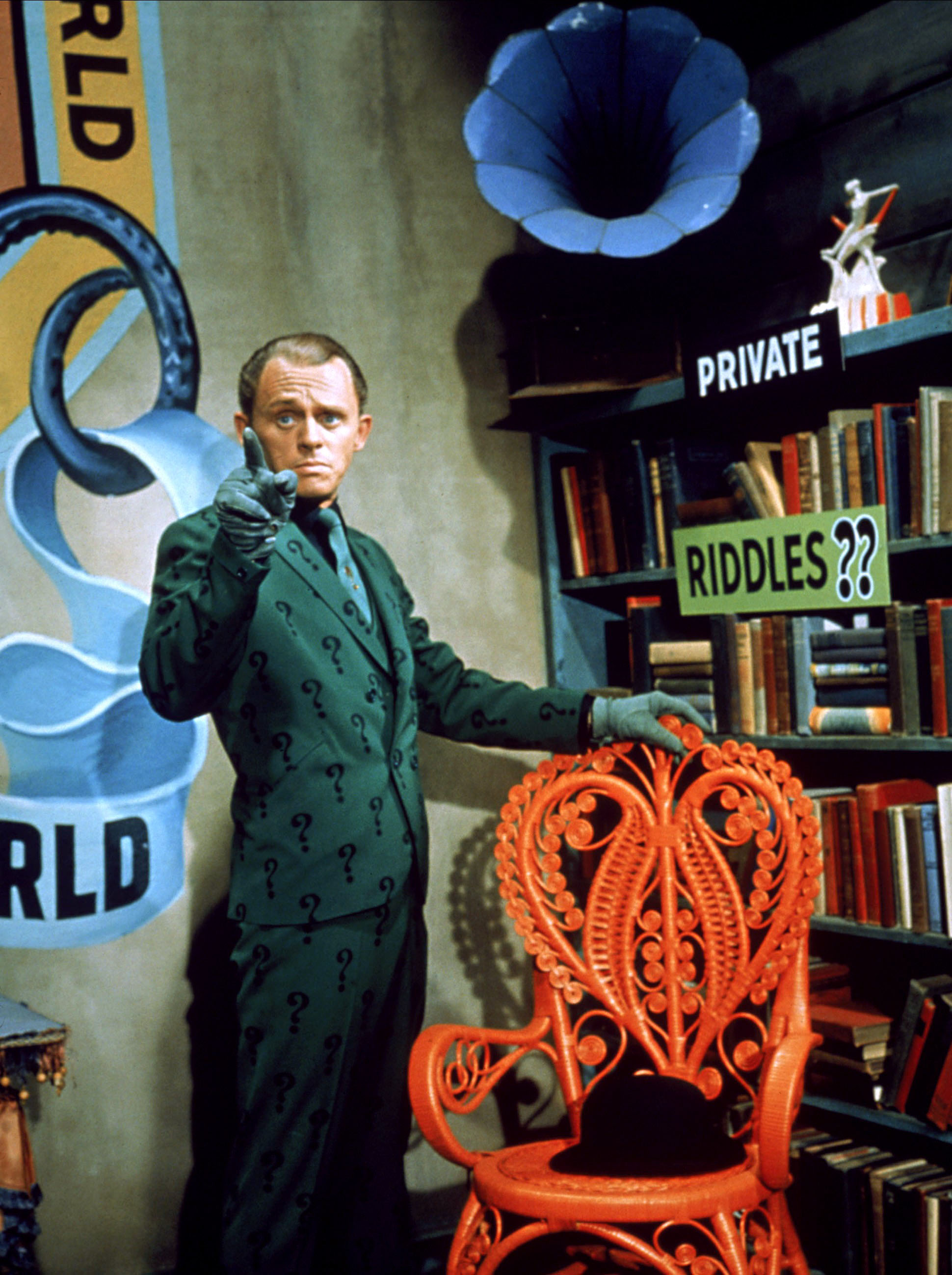 One of the few villains to sport two signature looks, it was his three-piece suit that caught most viewers’ attentions. Worn both in the series and the feature film, Riddler’s jacket features nearly identical, hand-stenciled question marks throughout, a testament to the time and care paid to the piece by the show’s costume department.

In an effort to completely divorce the series from reality, everything in Gotham City was over-the-top, including the action. Rather than attempt a robbery strapped with guns and ammo belts, the rogues of 1960s Gotham favored a whimsical approach to crime, regularly attacking the Dynamic Duo with thick plumes of candy-colored smoke. Luckily, Batman and Robin were armed with their Bat-Respirators during the series pilot and on several later occasions. The respirators were even used “underwater” (slow-moving actors filmed behind a fish tank) when the Riddler flooded a bank vault during a heist. The fiberglass mask covers the wearer’s nose and mouth, with a small set of valves and tubing affixed to the front. A ring inside the mouth section was bitten by the actors to hold the piece in place while Pow/Zap/Whamming bad guys.

The show’s third season scaled down production considerably, but also made Bat-history in the form of Yvonne Craig’s Batgirl. Though Batgirl had appeared in the Golden Age comics of the 1950s, this Batgirl was a completely new interpretation, making her secret identity that of Barbara Gordon, the police commissioner’s librarian daughter. The character was then quickly incorporated into the comics, where she continues life to this day. An excellent example of classic bat-gear, Batgirl’s “Antidote” pillbox features bold labeling as well as Batgirl’s distinct personal insignia. But no matter how much Joker gas you’ve inhaled, the original candy “pills” are definitely not safe for Bat-consumption.

Walter Slezak’s Clock King was one of the series’ most notable original characters due entirely to his creator. Though uncredited for decades, comics writer Bill Finger was the true father of much of Batman’s contemporary mythology and holds the distinction of being the only comics writer to pen a script for the TV show. Finger created the Clock King for the series, who eventually made his way into the comics and other adaptations. This set of patches was made to be worn by the Clock King and his pun-friendly lackeys. The patch intended for the King himself is particularly notable as it is the only one in the set to feature gold accents. An excellent piece of history for a true fan.

Do villains share gadgets? After being used briefly to hold Egghead’s eggsplosive radar eggs, this wooden box was seen again, this time carried by the Joker’s gun moll while searching for the secret entrance to the Batcave. Conspicuously undecorated while in Egghead’s care, it appears it was the Joker who saw fit to label the box in the aesthetic common to the series’ other boldly adormed gadgets. This colorful box of grenades features a swirling array of colorful rings on one side and a playing card motif on the other – original prop “grenades” included.

Where would the Bright Knight be without his youthful ward? THE defining piece of Dick Grayson’s crimefighting uniform, the Boy Wonder slid down the batpoles and reappeared in his trademark vest at the start of every adventure. This particular vest had its own life after the show, winding up in a costume rental house with a lightening bolt patch covering the “R” insignia. It is unknown why the original pieces were removed, but great care was taken by textile conservator Cara Varnell to remove the lightening bolt piece and safely attach the signature “R” patch.  The patch, laces, and belt offered with this vest come from Bat-costume replicator extraordinaire Chuck Williams, completing the look and returning the Boy Wonder to his former glory.

Whether carefully opening a booby-trapped package or trying to avoid gun fire from the Penguin, the Bat Shield was one of Batman and Robin’s most effective and memorable pieces from the series. A perfect mixture of super heroics and broad comedy, this large acrylic shield was supposedly tucked away on Batman’s utility belt at all times, even though we never quite saw how they put it away. 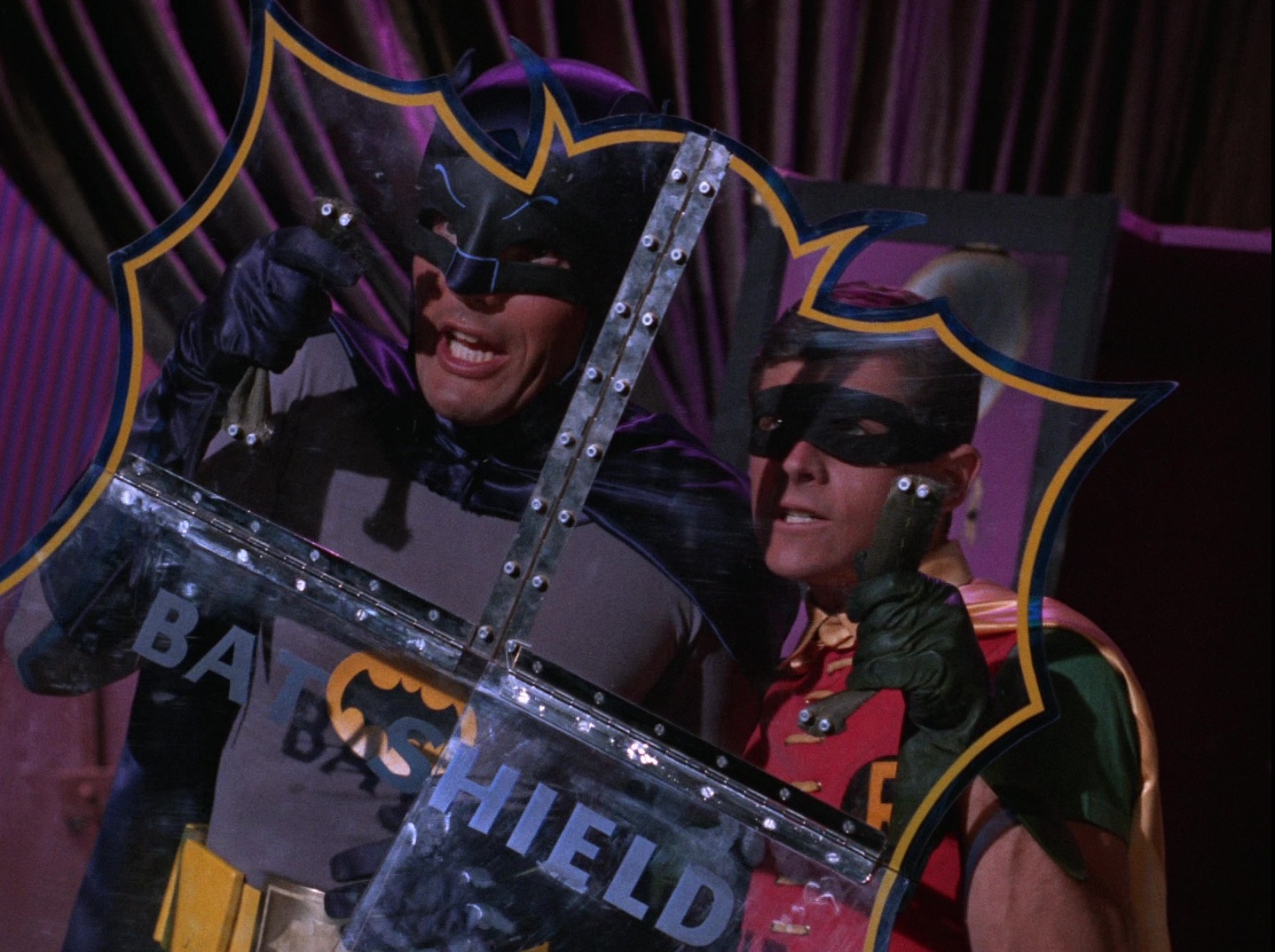 This shield is believed to be the only one made for the series in this particular style, though the lettering did see some changes throughout the run of the show. The shield was struck with sand pellets during production of “The Penguin’s Nest,” after which it was presumably cleaned and the lettering changed. While previously the words “Bat” and “Shield” sat on separate sections of acrylic, the repainted version put the “S” from “Shield” on the left pane. After this, the shield was used in the production of “The Devil’s Fingers/The Dead Ringers,” the series’ highest rated two-parter, guest-starring Liberace.

The piece remains in excellent condition thanks to the high-standards of the Comisar Collection’s archival procedure and is still equipped with its original hinges and nylon hand straps on the back. Offered on a custom metal display stand, the piece is ready for display in any Manor drawing room or secret lair. 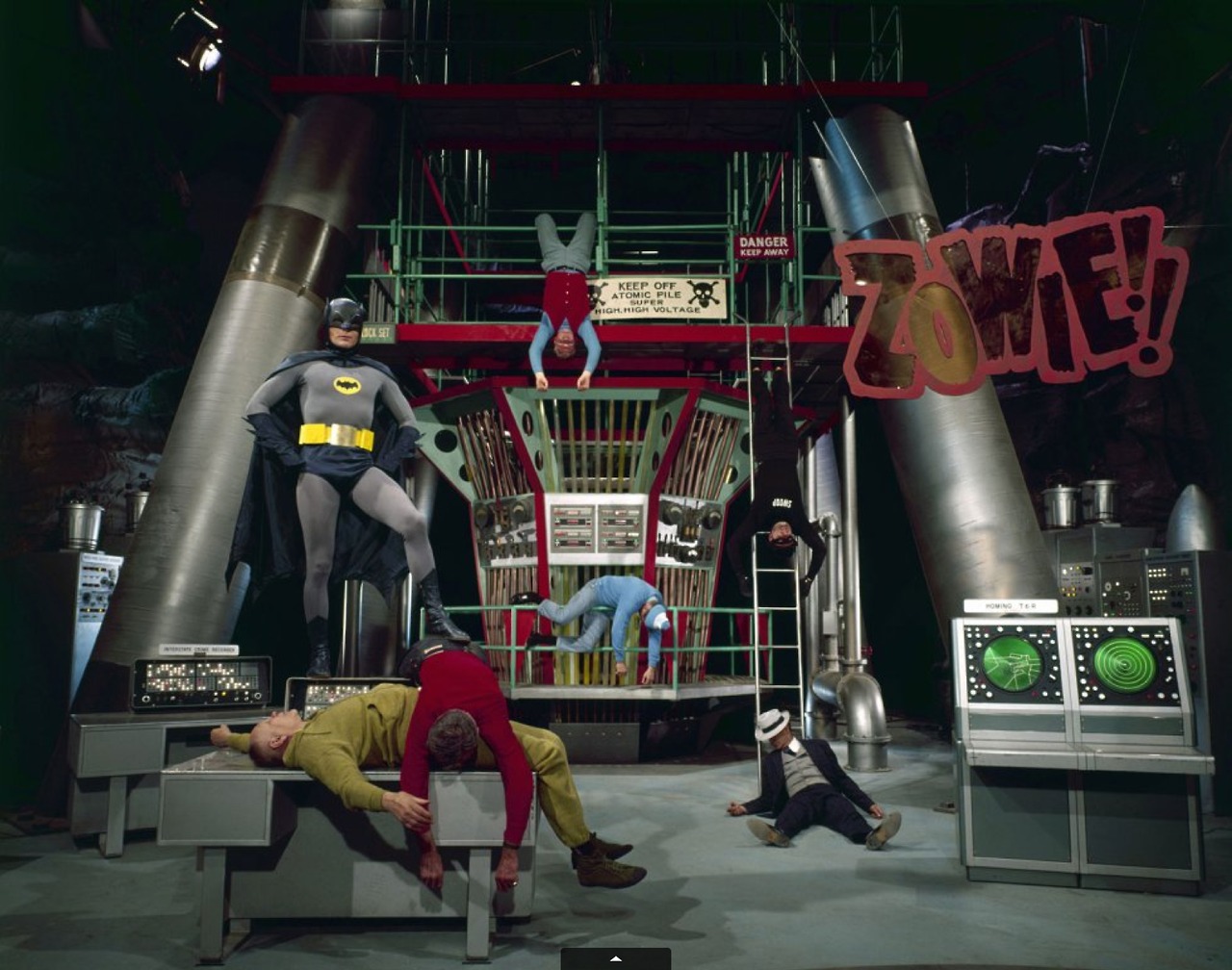 These lots and many more are open for bidding now in Propstore’s TV Treasures Auction, live auction December 1st. Thank you for joining us for our blog coverage and be sure to check out our other articles in our auction series!

Share
Related Articles
05.08.2016  |  Auctions
Propstore Live Auction 2016 Presents… Batman
Welcome to another exclusive preview from the Propstore Live Auction 2016! During August and September, we will be posting Blog updates twice-weekly to whet your appetite with some of the amazing original memorabilia that will be coming up for sale in the auction…
20.11.2020  |  Live Auction - London 2020
Batman and the Joker | Designing Gotham
In this blog, we are looking into the design of two characters who are the epitome of hero vs. antihero – Batman and his infamous arch nemesis, the Joker – and how over several decades, the look of both has dramatically transformed.
12.11.2018  |  Auctions
Boldly Going: Highlights from the TV Treasures Auction
Outer space was on the forefront of culture in the 1960s. When President John F. Kennedy set out his plans for the New Frontier, he rekindled a lost pioneer spirit and set our sights – and imaginations- on the stars. Armstrong and Aldrin first explored the moon in 1969, and a short 300 years later, […]
14.04.2017  |  Auctions
Propstore’s T2 Trainspotting Auction presents… Sick Boy
With bidding in Propstore’s T2 Trainspotting Auction well underway in support of our two charities The Junction and Calton Athletic, we thought we’d share with you some of our favourite pieces from hilarious fan-favourite Sick Boy (Jonny Lee Miller) to whet your bidding appetite…
Sign up to be in the know