The movie was shot in England where the entire titular village of Sleepy Hollow was created at Lime Tree Valley near Marlow, Buckinghamshire. The bulk of soundstage work was done at Leavesdon Studios, with the Tree of the Dead scenes being filmed later at Shepperton Studios.

The look and feel of the movie is reminiscent of the classic Hammer Horror films of the 1960s and it even features one of Hammer’s most famous faces (Christopher Lee) as the ‘Burgomaster’ in the early sequences in the film. 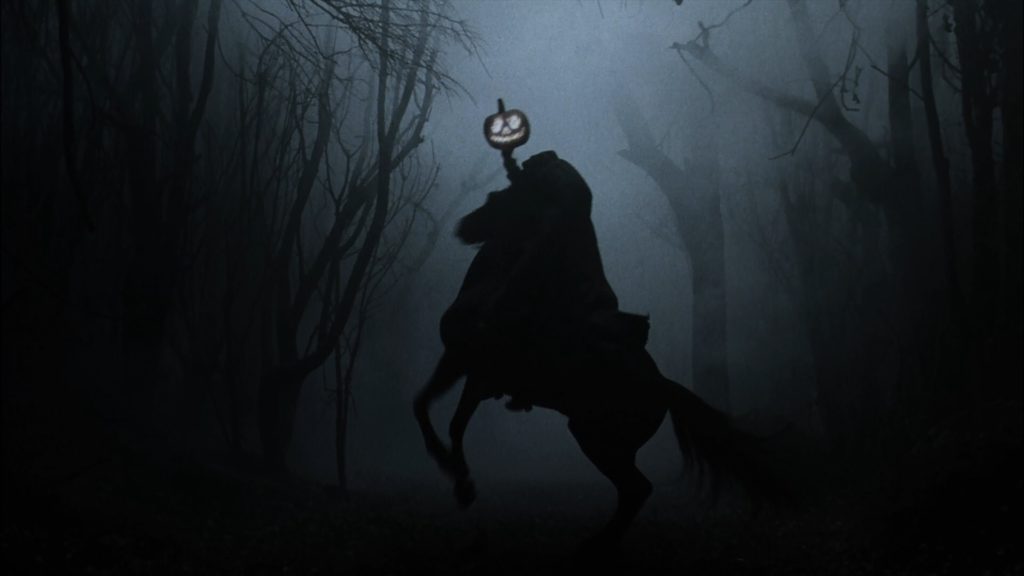 The film has a healthy dash of Burton’s quirky gothic style, which is translated into the costumes of the film. The Headless Horseman – in particular – is artfully cloaked in layers of ornately decorated material that brings a whole new story-telling aspect to the character. Without ahead, or a discernible actor to play off in the film, it is seemingly the costume alone that brings to life this foreboding and menacing character on the screen.

The role of the Headless Horseman in his headless state was played by stuntman and actor Ray Park (known best for his role as Darth Maul in Star Wars). And as the plot unfolds and we find out that the Horseman had been cursed, we see Christopher Walken play his pre-cursed sharp-toothed form, known as the ‘Hessian’ in flashbacks. 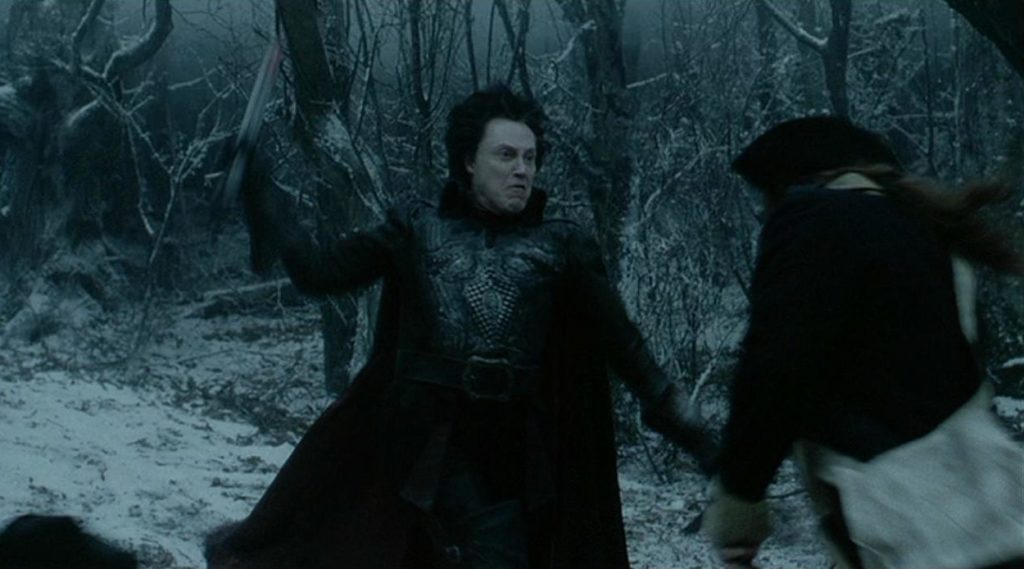 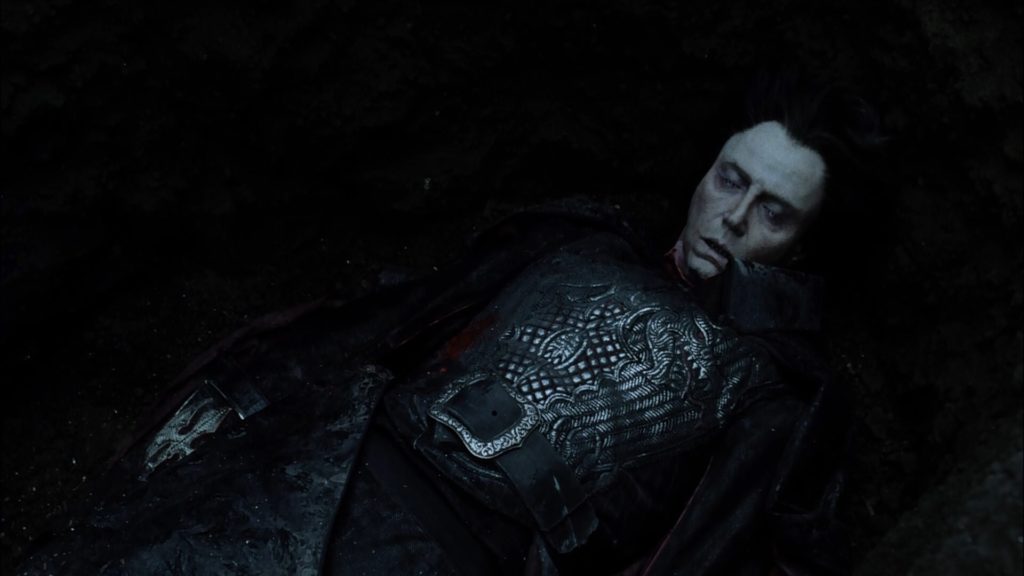 What is so interesting about the Horseman costume is how it subtly changes and decays throughout the film, reflecting that time is passing in the film and for the character. During his pre-curse scenes, Walken’s costume as the Hessian shows the costumes in the best condition. The quality and intricacy of the costume’s fabrics and embroidery suggest that the character was able to afford quality attire, giving yet another sly hint to the untold backstory of the character. Soon after the Hessian’s decapitation, the degeneration of both character and costume begins. 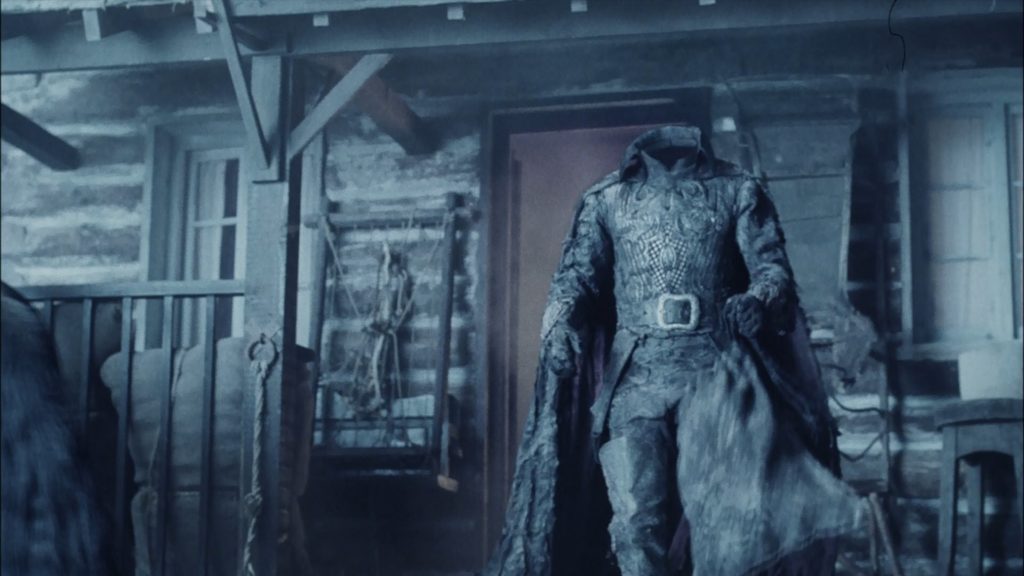 The costume was designed by twelve-time and three-time winning Oscar nominated designer Colleen Atwood, a long-time collaborator of Burton. Since meeting and working together on the production of Edward Scissorhands (1991) almost 30 years ago, Atwood has created costumes for some of Burton’s most iconic films – including Planet Of The Apes (2001), Mars Attack! (1994) and Sweeny Todd (2007).

The final stage costumes were given a covering of wax that gave a very realistic mould effect to the fabric, subtly reflecting the passing of time for the character. The tears and stains also mirror the general wear and tear sustained by the character during his ‘headhunting’. Special effects versions of the tunics were also seen to be riddled with bullet holes and stab wounds. 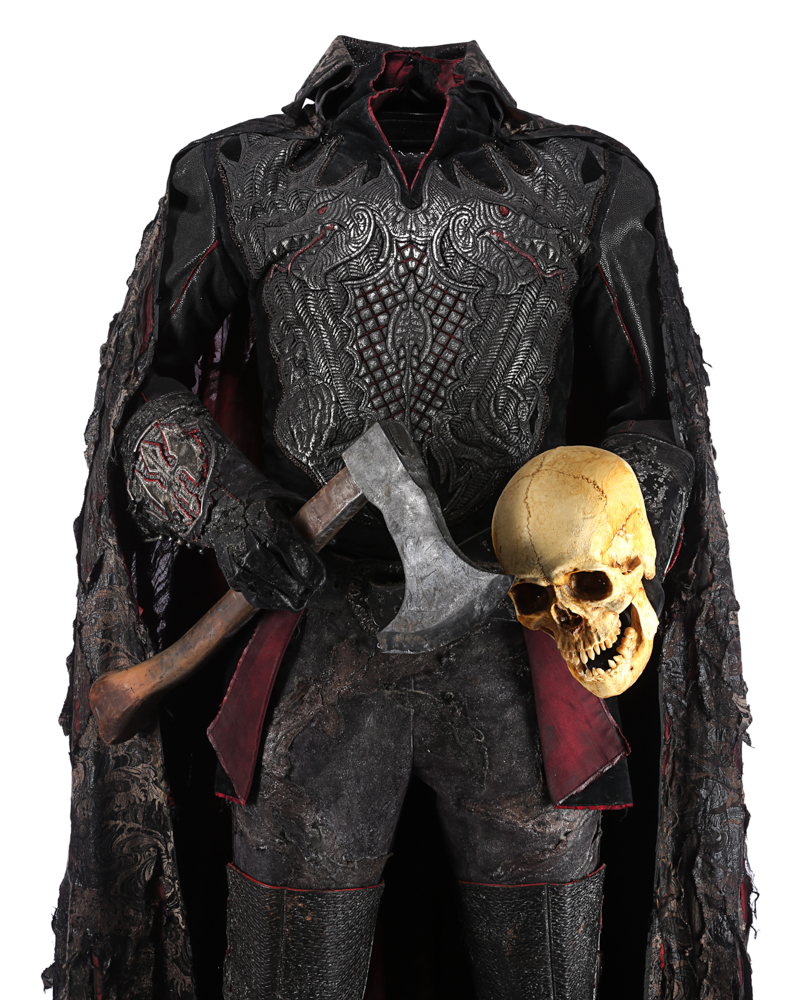 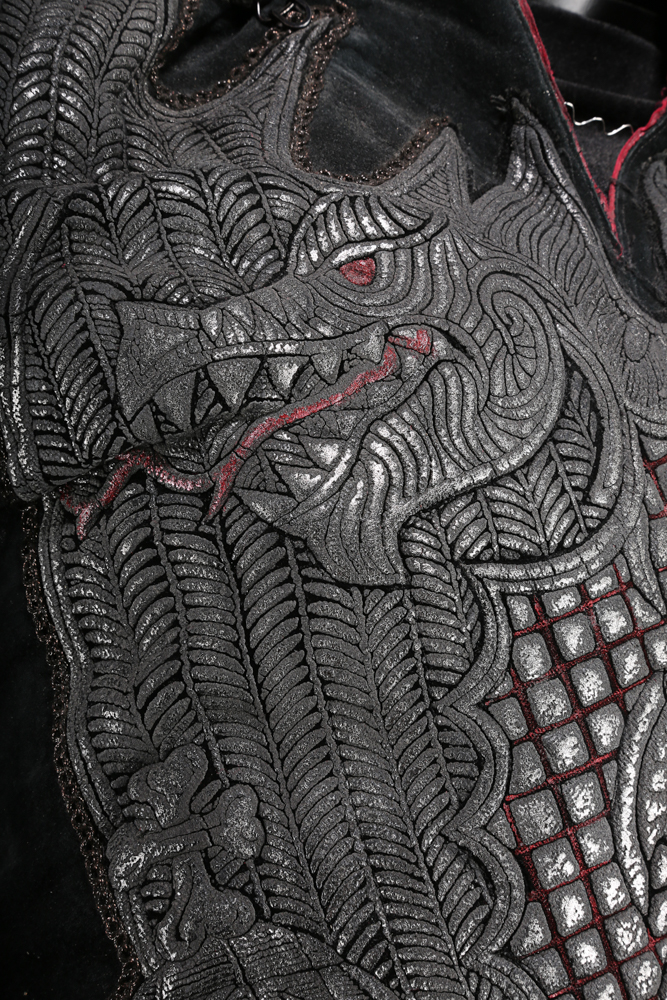 The costume itself is very ornate. The tunic features two large dragons finished in silver and red embroidery, with a distinctive check pattern on the chest piece seemingly used to seen from a distance. 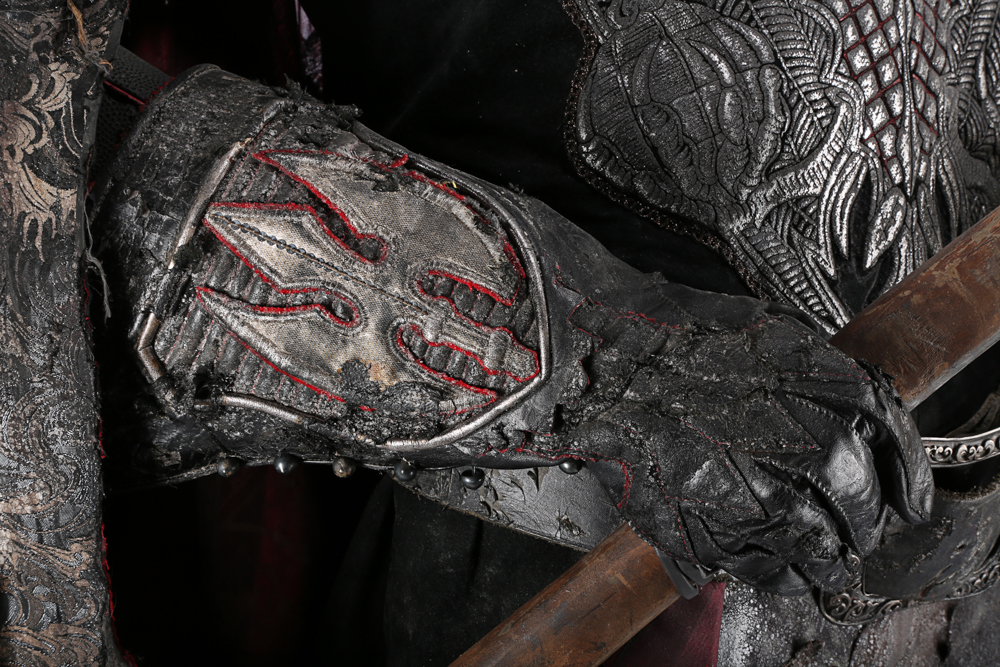 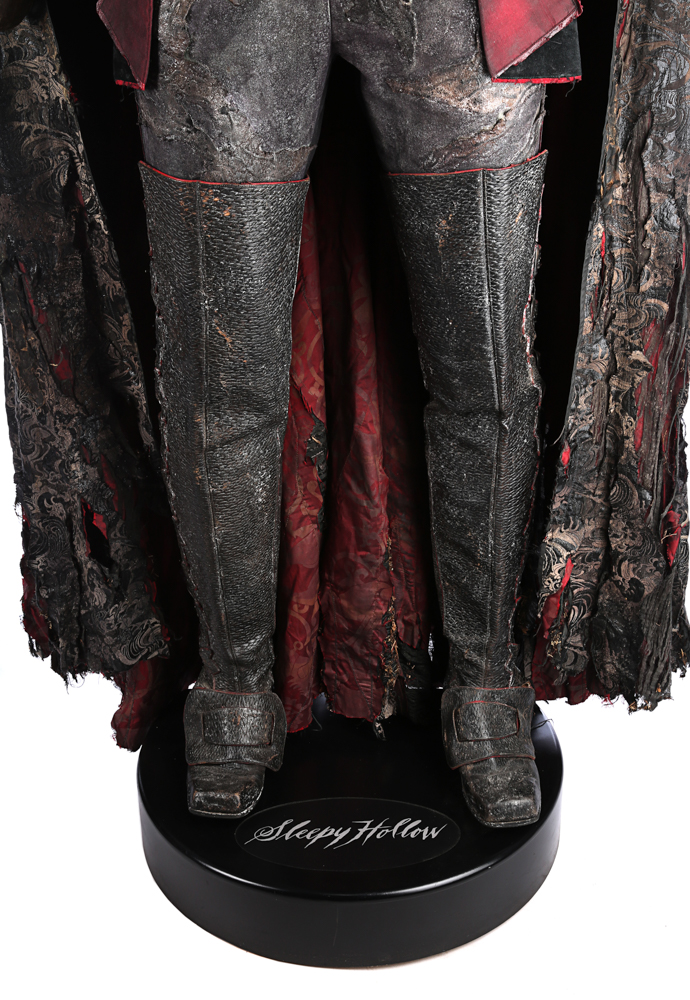 The black gloves and the elongated long black boots are made from a unique leather, which was specially finished in Italy and supplied to Noel Howard and his team at MBA Costumiers in London. 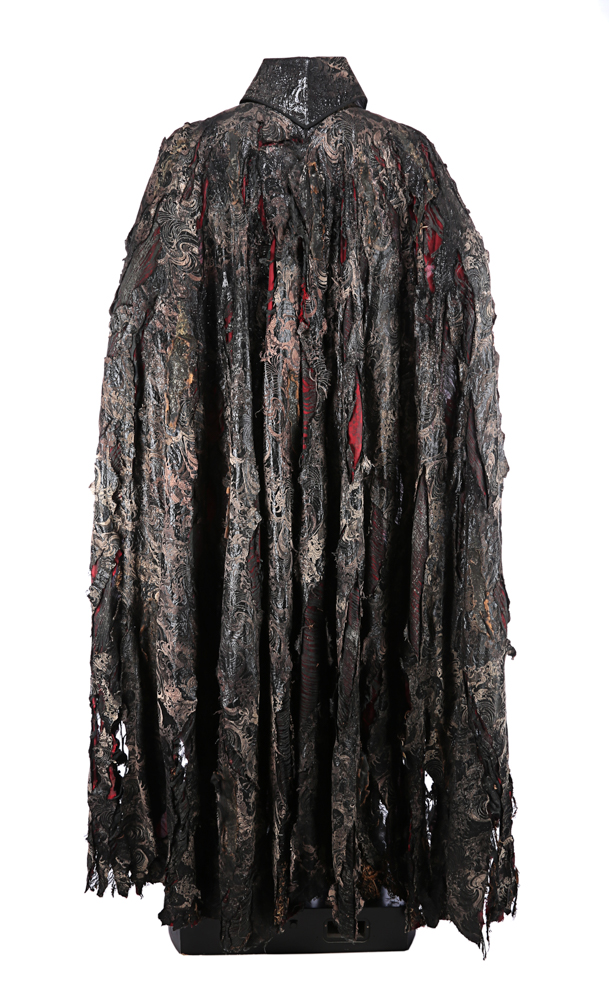 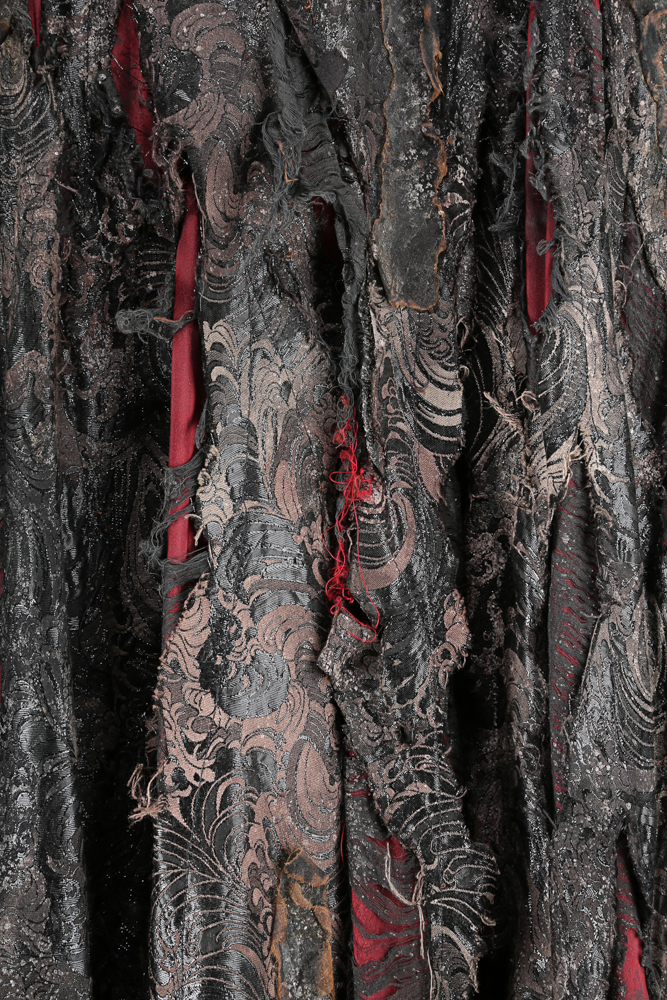 The cloak is heavily distressed and torn with an elaborate swirling pattern, with a continuing hint of red that is revealed throughout the rest of the costume. The display is finished with a stunt version of one of the Horseman’s axes and a replica (from the original moulds) of the Horseman skull.

Whether you love or hate horror films, you can’t deny that with a little Burton magic and a whole lot of help from Costume Designer Colleen Atwood, they managed to truly bring to life one of literature’s most horrifying villains! 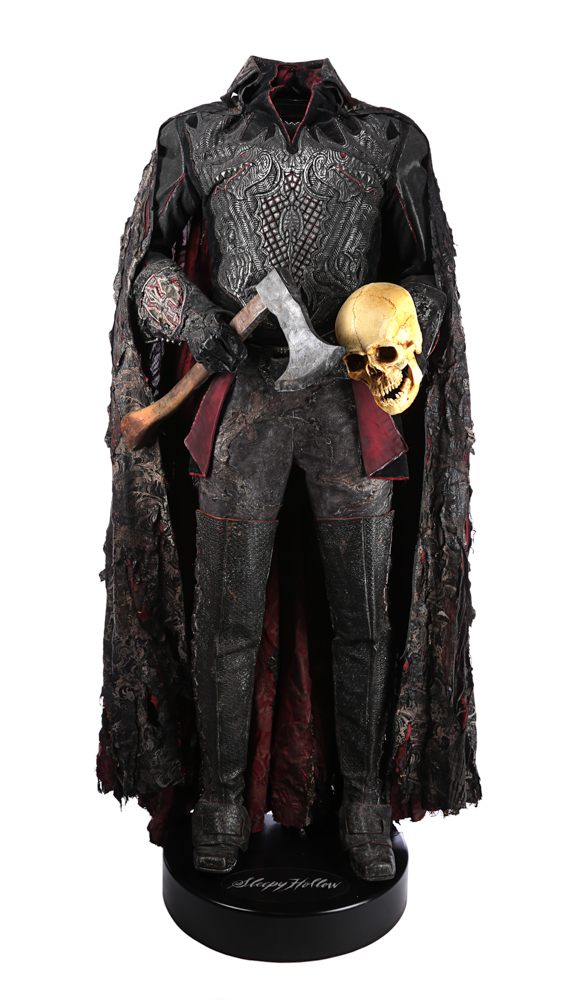 Share
Related Articles
26.03.2015  |  Collections
Introducing Our Terrifying Collection of Horror Film Props!
For all you horror fans out there, here is a quick glimpse at some of our most treasured props and costumes that decorate our galleries in London and Los Angeles. This represents the crème de la crème of film props from some of the most iconic horror films of all time, so let’s see if […]
20.11.2020  |  Live Auction - London 2020
Batman and the Joker | Designing Gotham
In this blog, we are looking into the design of two characters who are the epitome of hero vs. antihero – Batman and his infamous arch nemesis, the Joker – and how over several decades, the look of both has dramatically transformed.
09.11.2020  |  Live Auction - London 2020
Christopher Lee | Vampire, Villain and Everything in Between
Throughout their careers, actors can portray characters with a multitude of different professions, backstories, nationalities. However, few actors have lived such a varied life themselves. Sir Christopher Lee was an exception. Before a career in which he would be officially crowned ‘The Centre of the Hollywood Universe’, he was in the RAF; conducted espionage in […]
15.04.2020  |  Uncategorized
15 Films to Get Lost in During the Lockdown
The “Lockdown.” It’s here. It’s weird. It’s unsettling. And, it’s starting to get a wee bit boring now. With so much angst, anxiety, fear and panic in the world, now calls for a time to try and distract ourselves as much as possible. There are home workout options aplenty, if that’s your sort of thing, […]
Sign up to be in the know