Obi-Wan is, it’s not hard to argue, the Star Wars saga’s greatest hero. Inspired by Toshiro Mifune’s steely General Rokurota in Akira Kurosawa’s The Hidden Fortress, with a bit of Gandalf thrown in for good measure, he is simultaneously a cool-headed warrior with a witty turn of phrase and also a wise mentor, deeply versed in the ways of the universe. He dispatches three of the series’ most fearsome villains (Darth Maul, General Grievous and, in his first incarnation, Darth Vader), he trains two of the galaxy’s greatest Jedi, and he dispenses some of the movies’ finest and most quotable lines (“Who is more foolish? The fool or the fool who follows him?”). 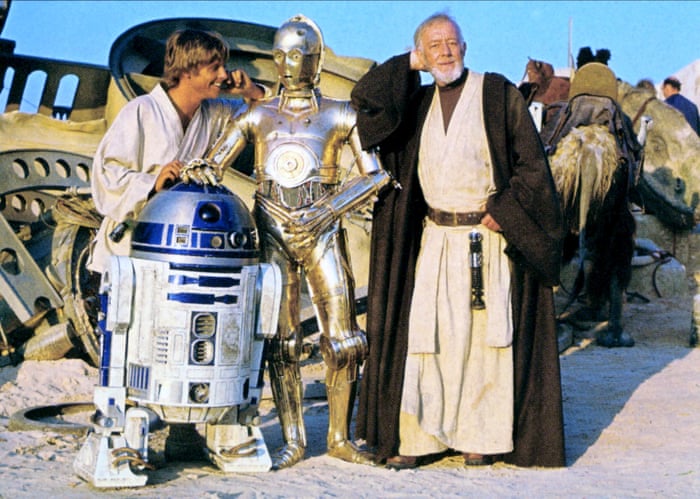 Image courtesy of The Guardian

In the form of Alec Guinness, Kenobi brought both gravitas and sardonic humour to Star Wars: A New Hope, with a performance that earned the veteran English actor the three trilogies’ only Oscar nomination for acting. In the younger form of Ewan McGregor, we witnessed his development and expertise as a warrior and general (even a bit of a detective, too, in Attack of the Clones), building to the tragedy of his dearest friend’s fall to the Dark Side. For all the prequel trilogy’s flaws, McGregor’s performance remains a highlight throughout, from his appearance as an apprentice to Liam Neeson’s maverick knight Qui-Gon Jinn to his fiery climactic battle with his own former apprentice in Revenge of the Sith. And how cool is it that Propstore has the lightsaber he used in that pivotal fight up for auction this month?

With a McGregor-starring, Obi-Wan-focused Disney+ show to look forward to next year (it starts shooting in March, all being well), we thought we’d salute General Kenobi by looking back at his greatest moments in the Skywalker saga.

It doesn’t take long to convince long-exiled hermit Ben Kenobi to rejoin the fight as Jedi Knight Obi-Wan. In fact, he barely hesitates before whipping out the lightsaber which belonged to Luke’s father and placing it in the young farmer’s hands. This immediately sets Kenobi up as a really interesting character: while he’s wise and venerable, he also seems kinda reckless, eagerly dragging the son of Vader on some “damned fool idealistic crusade”. 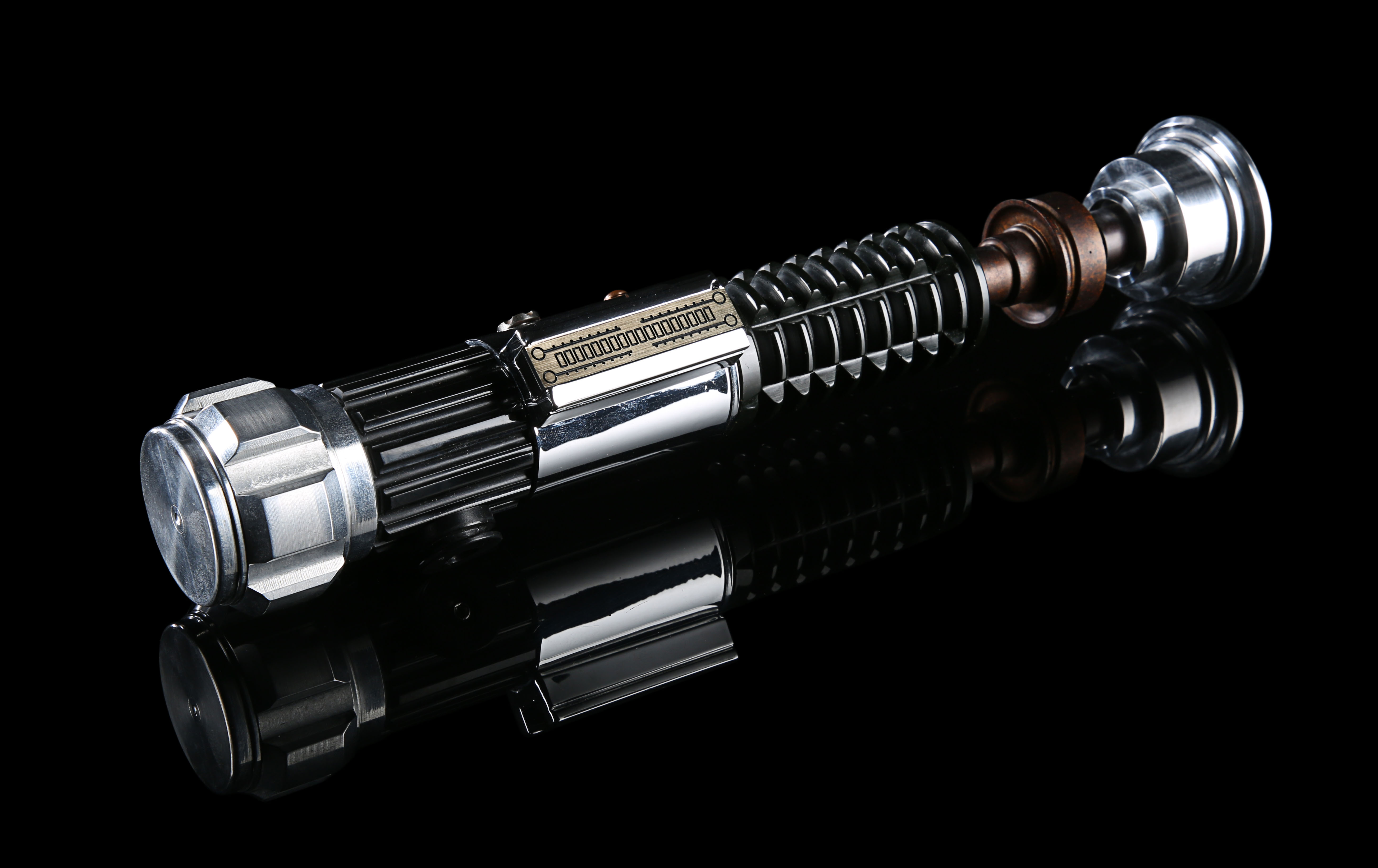 Upon arriving in the “wretched hive of scum and villainy” that is Mos Eisley, we witness Obi-Wan’s conflict-avoiding power, through the use of a Jedi mind trick (“these are not the droids you’re looking for”). But minutes later, we also have proof of his phenomenal martial skills. No-good duo Ponda Baba and Dr. Evazan decide to pick on Luke at the cantina bar, and after ignoring Obi-Wan’s rather belittling advice that “this little one’s not worth it”, a scuffle ensues. One that is quickly stopped with the single, deft swish of a lightsaber, slicing Baba’s arm clean off. At this point, we’re in do doubt: Old Ben is bad ass.

Guidance from beyond the grave (Star Wars, 1977)

It’s a crucial moment in the fight against the evil Empire. Luke is at the controls of an X-Wing during the Battle of Yavin, and has one last shot at getting his proton torpedoes down the Death Star’s exhaust port. It is now that we realize Obi-Wan really meant it when he told Darth Vader he’d become more powerful if struck down. Death has not stopped him giving advice, and he tells Luke to “use the Force” rather than his targeting system. Advice Luke heeds, with explosive results.

Obi-Wan could often be a tricky fellow, as this telling confrontation with Luke on Dagobah reveals. The young Skywalker is understandably annoyed at his former master for telling him that Darth Vader killed his father, when Darth Vader is his father. It makes sense that Obi-Wan telling Luke this might not have been particularly helpful, but it was still a lie. Or was it? That Kenobi’s got an answer for everything. “What I told you was true, from a certain point of view,” he deflects. “You’re going to find that many of the truths we cling to depend greatly on our own point of few.”

This is the trial-by-fire of Obi-Wan Kenobi’s apprenticeship: the moment he graduates to true knight, while revealing his supreme lightsaber skills. It is also, hands down, the best lightsaber battle in the entire Skywalker saga, thanks in no small part to Ray Park’s acrobatic talent as Obi-Wan and Qui-Gon’s Sith foe, Darth Maul. Maul is an opponent who proves too tough for the doomed Qui-Gon, but fuelled by some rather un-Jedi-like rage at his master’s death, the Padawan deals his horned enemy some serious retribution, chopping him clean in half. 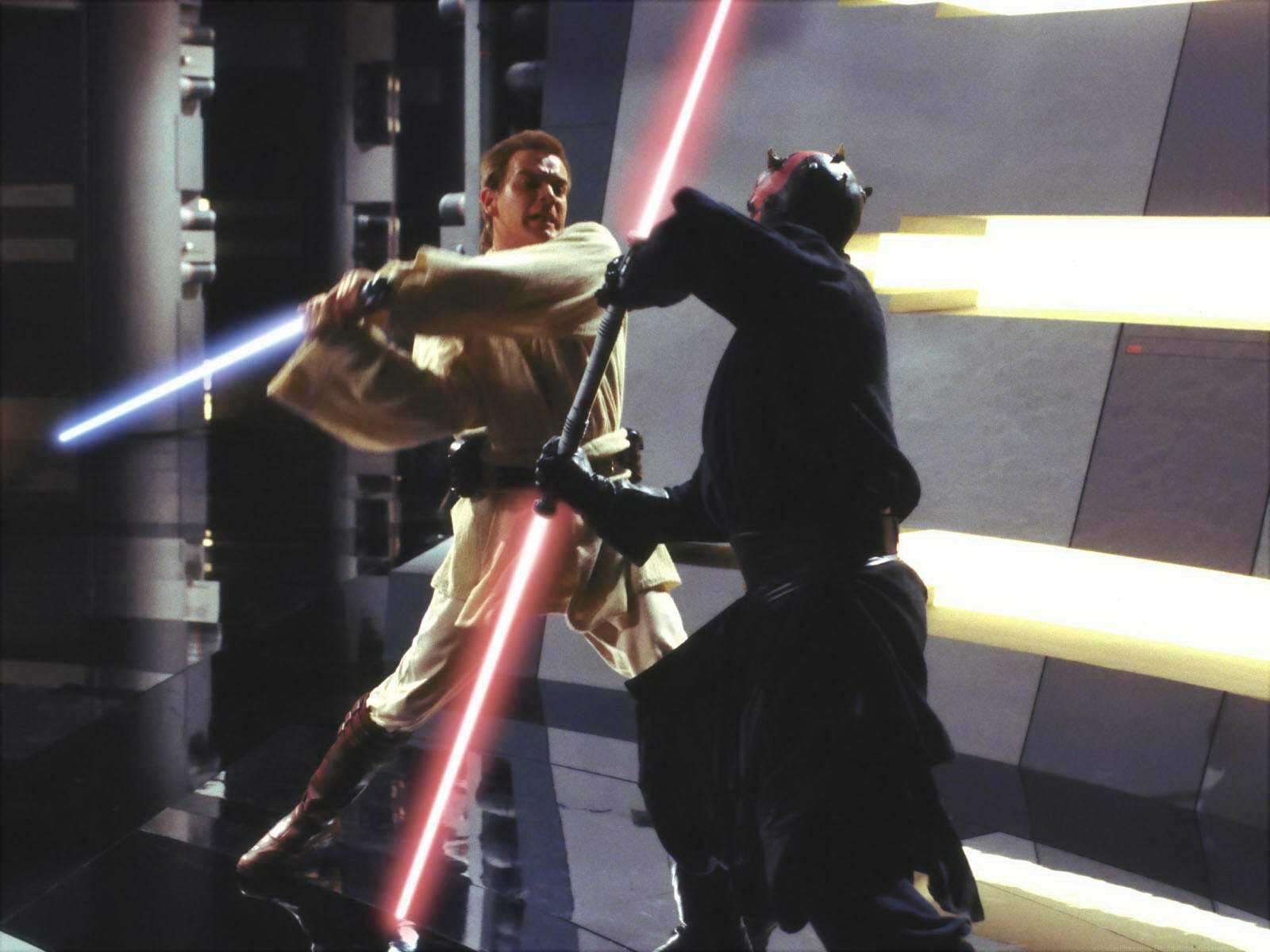 Defeating Grievous (Revenge of the Sith, 2003)

Obi-Wan’s final battle with the Jedi-hunting cyborg General Grievous is actually their fifth (all the others took place during the Clone Wars animated TV show), and it couldn’t be more decisive, effectively ending the Clone Wars. What makes it so remarkable – and fun – is the way it reveals Kenobi’s resourcefulness as a fighter, pressing on even after he loses his lightsaber. He even resorts to using a blaster to finish the job, by repeatedly shooting Grievous in a surprisingly brutal coup de grace. Although, as Obi-Wan sniffs, tossing the gun carelessly aside, it is “so uncivilized”.

Taking the high ground (Revenge of the Sith, 2003)

This is the most significant and tragic moment in Obi-Wan’s life (aside from the murder of Satine Kryze, the woman he loves, in The Clone Wars). His former apprentice, his best friend, the supposed “Chosen One” has gone full-Sith, his path to the Dark Side littered with the bodies of Jedi younglings. In a hellish, volcanic landscape, Obi-Wan and the recently named Darth Vader battle it out with their lightsabers, until Obi-Wan – master tactician that he is – takes the high ground. Like Joe Biden, he knows he’s won. But, like Donald Trump, Vader is not conceding. He launches a Force-leap attack… Only for his former master to strike and cut off both his legs, leaving him to burn up in a pit of searing ash. Like we said earlier: bad ass.

In this year’s London Entertainment Memorbilia, we have an amazing collection of original Star Wars triology movie memorabilia – from Obi-Wan’s hero lightsaber to your very own R5 droid. Discover a whole host of true movie history now over at propstore.com/liveauction

Share
Related Articles
07.05.2020  |  Uncategorized
Star Wars’ Top 10 Characters
To celebrate Star Wars week here at Propstore, we’ve decided to dig down deep and work out who are our top 10 Star Wars characters.
20.07.2020  |  Auctions ,  Star Wars
Evolving the Lightsaber l Entertainment Memorabilia Live Auction – Los Angeles 2020
It’s hard to think of a movie weapon more iconic or impressive than the lightsaber. With its unearthly glow and that mesmerizing hum, it represented the perfect blend of Star Wars’ romantic fantasy and sci-fi elements: a sword, which could have been a samurai blade or King Arthur’s Excalibur, whose blade glowed and crackled like […]
25.11.2020  |  Uncategorized
Nick Gillard | The Man Who Taught Jedis To Use A Lightsaber
Star Wars stunt coordinator and sword master Nick Gillard reflects on his days with the Jedi of the Old Republic.
30.11.2020  |  Uncategorized
FEATURED LOTS | Entertainment Memorabilia Live Auction 2020 – London
There’s only a few more days left until the London 2020, Entertainment Memorabilia Live Auction on the 1st and 2nd December, and with a wealth of content this year in the catalogue from over 350 iconic films, we wanted to give you a closer look into some of our featured lots in the auction…
Sign up to be in the know