By Matt Truex on 04.06.2018  |  Auctions ,  Uncategorized
Straight From Hell: Highlights from the Hellraiser: Judgment Auction
Share

Since Clive Barker’s first film, Pinhead and the Cenobites have been on the hunt for souls worthy of their special brand of care. Take a look now at some of highlight lots from the Hellraiser: Judgment Auction. 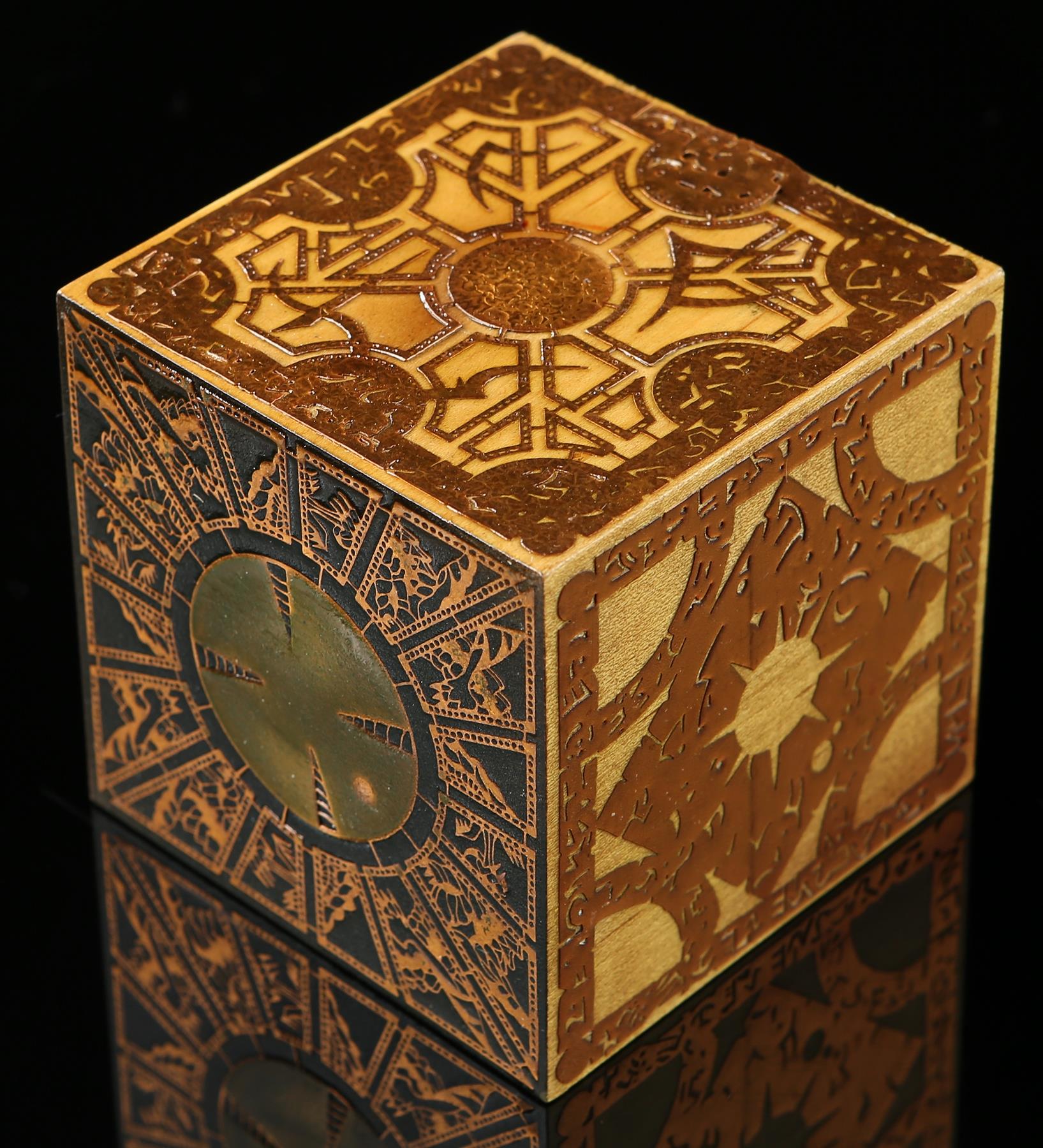 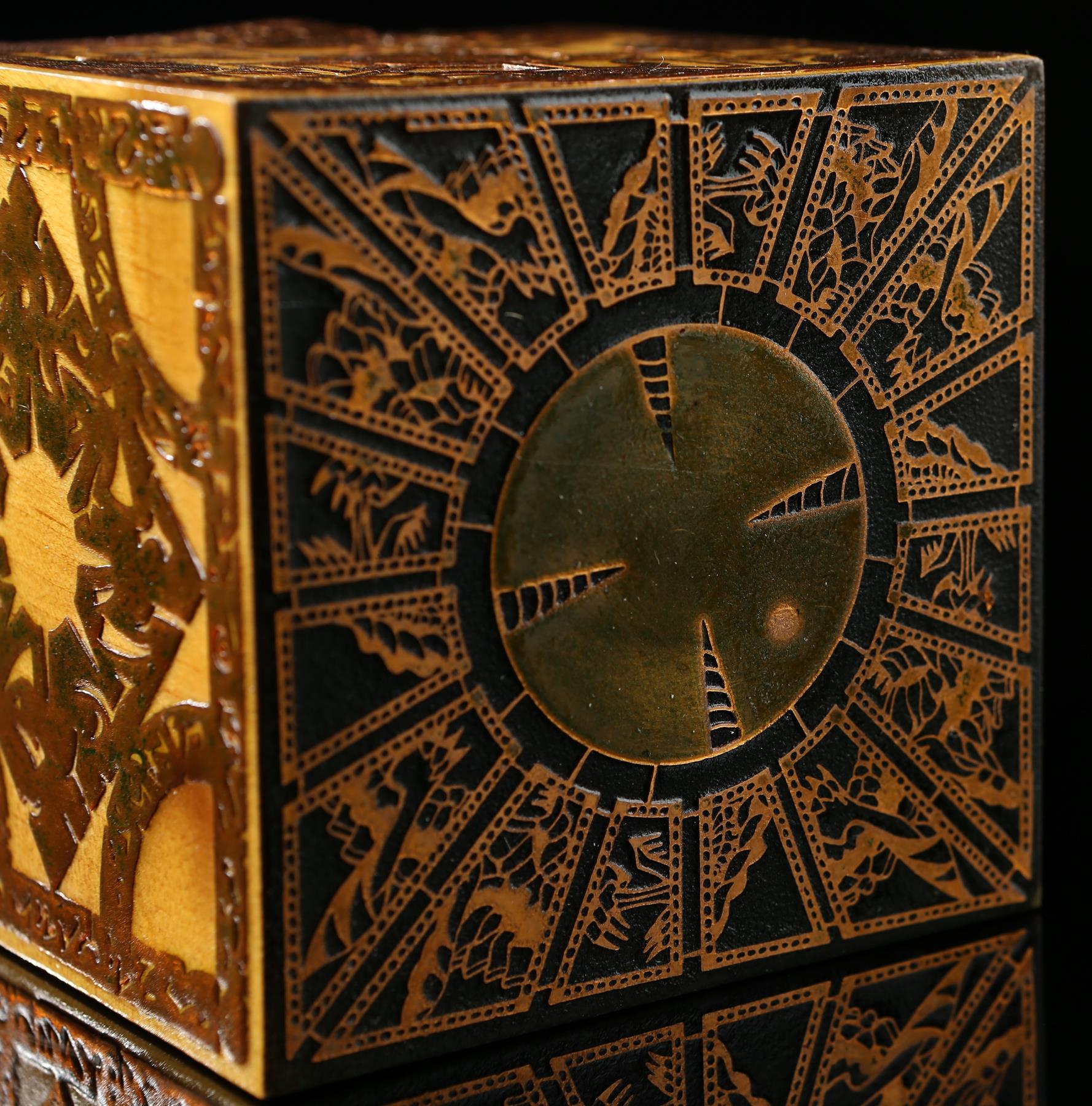 The most dangerous toy on the shelf. Ever since the very first Hellraiser film, Lemarchand lament configuration boxes have been the gateway to the Cenobites’ hell dimension. Unlike boxes made for previous films, which were constructed of brass and mahogany, several boxes created for Judgment feature copper-etched plates over bleached wood, giving a new spin to the sinister design. Keep out of reach of children! 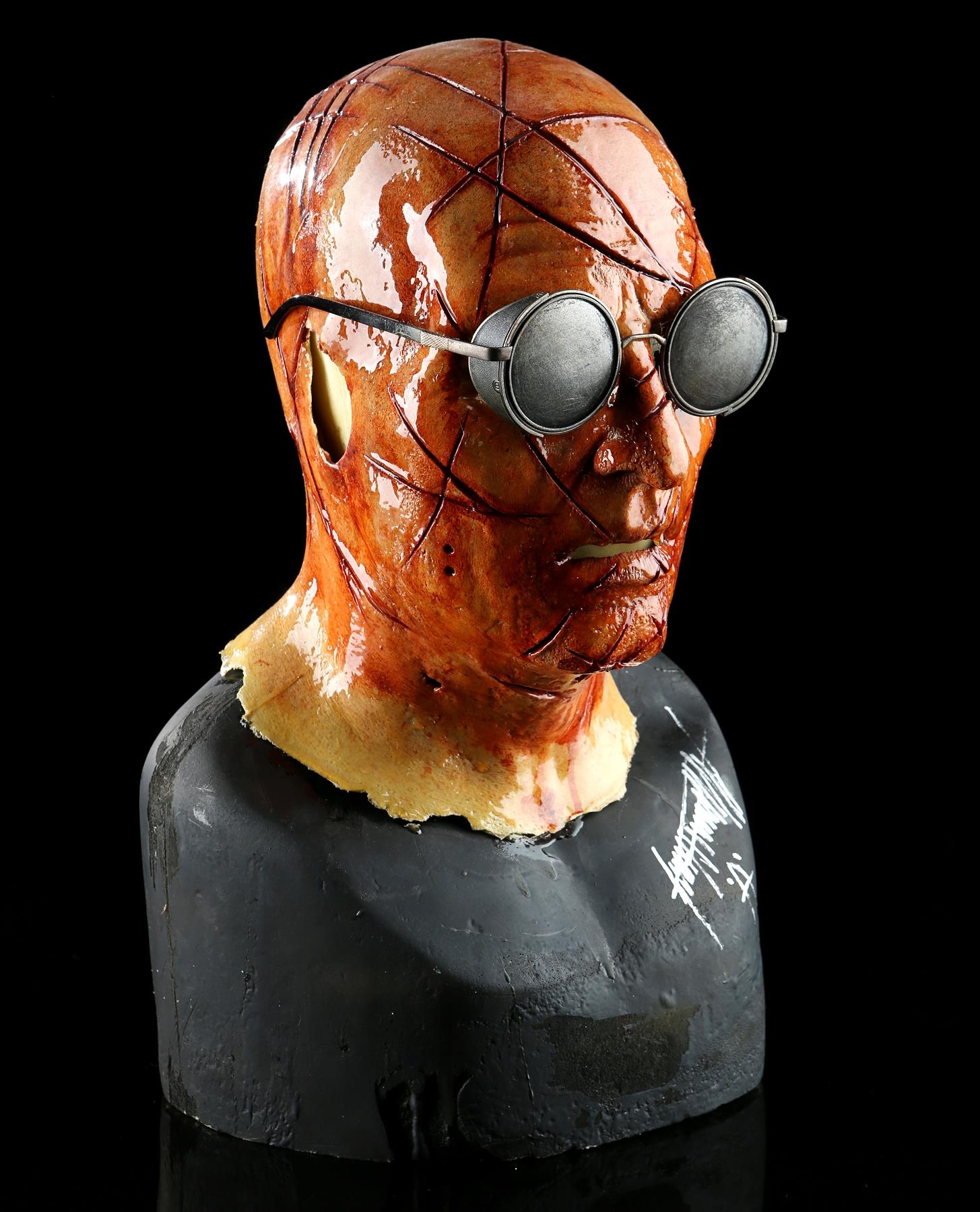 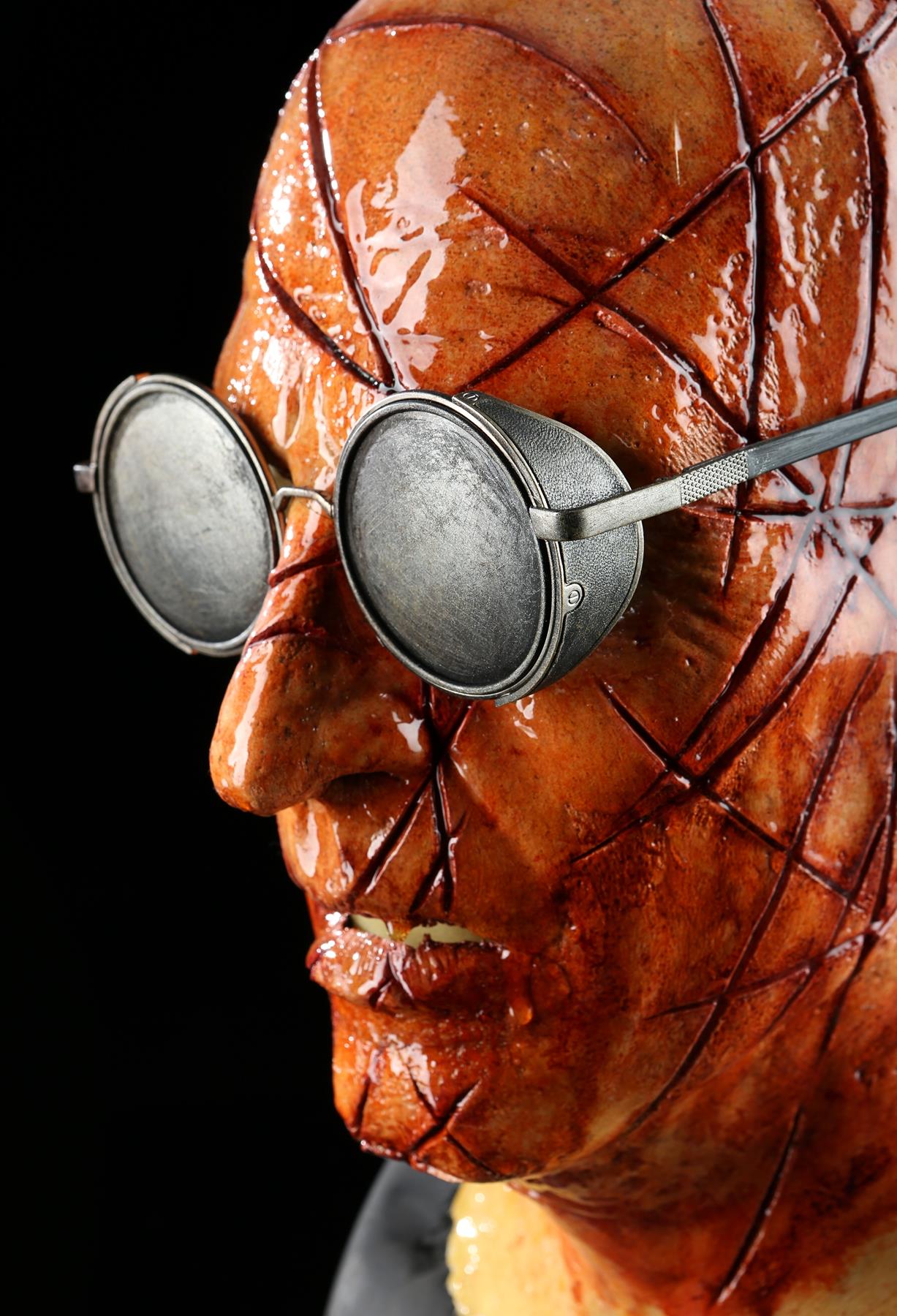 A new addition to Pinhead’s team is the loquacious Auditor. Played by writer/director Gary Tunnicliffe, the Auditor is a key accomplice for the Cenobites, carefully recording their victims’ earthly sins before passing them off to the Assessor, Surgeon, and Butcher. Unlike Pinhead’s grid of facial scars, the Auditor’s self-inflicted cuts are more haphazard and violent. All of them, accept the initials “G T” on the back of the head, a maker’s mark of sort from Tunnicliffe. The Auditor makeup appliances in the auction were all screen worn pieces, carefully removed during production and preserved with urethane. 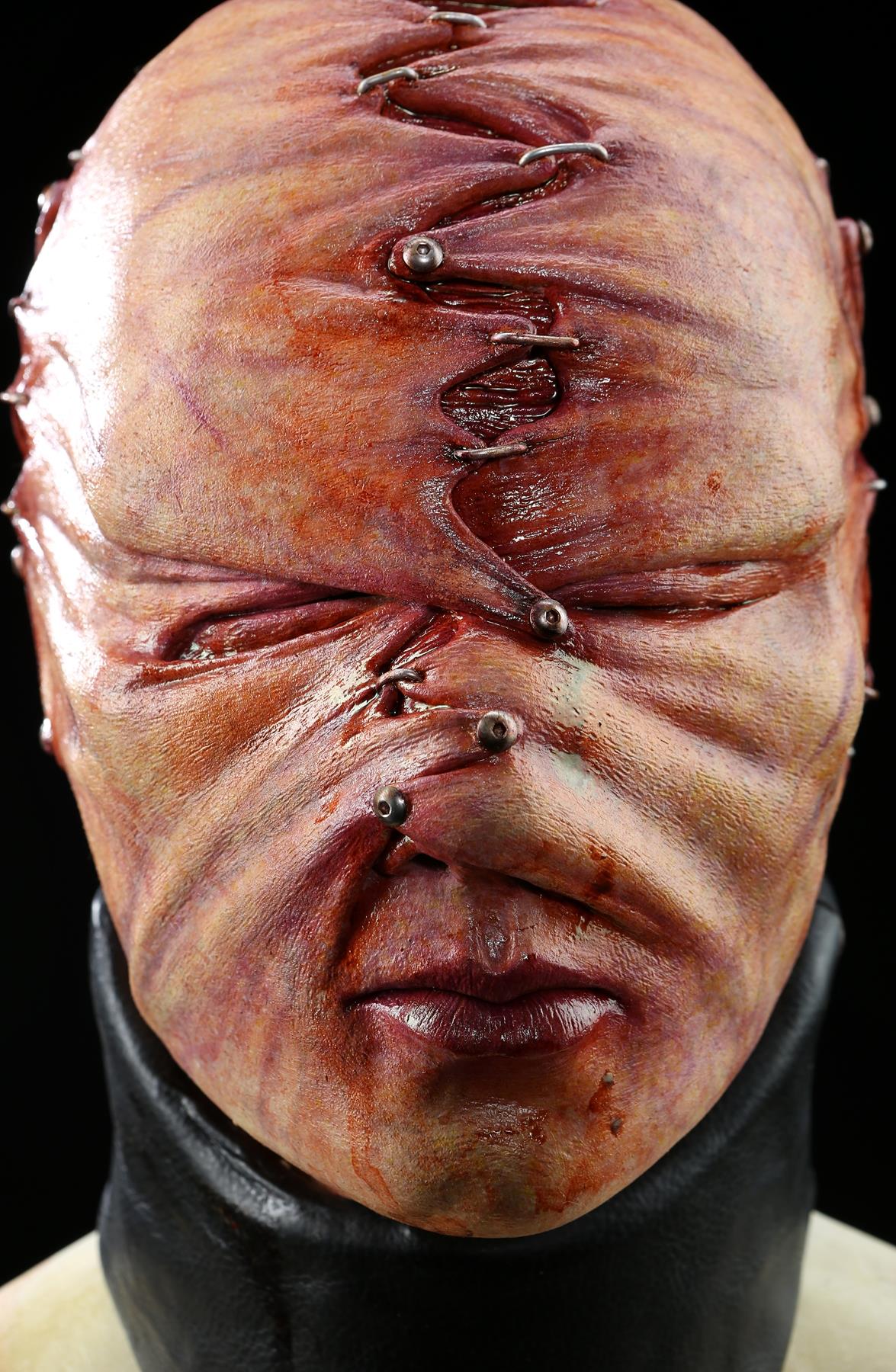 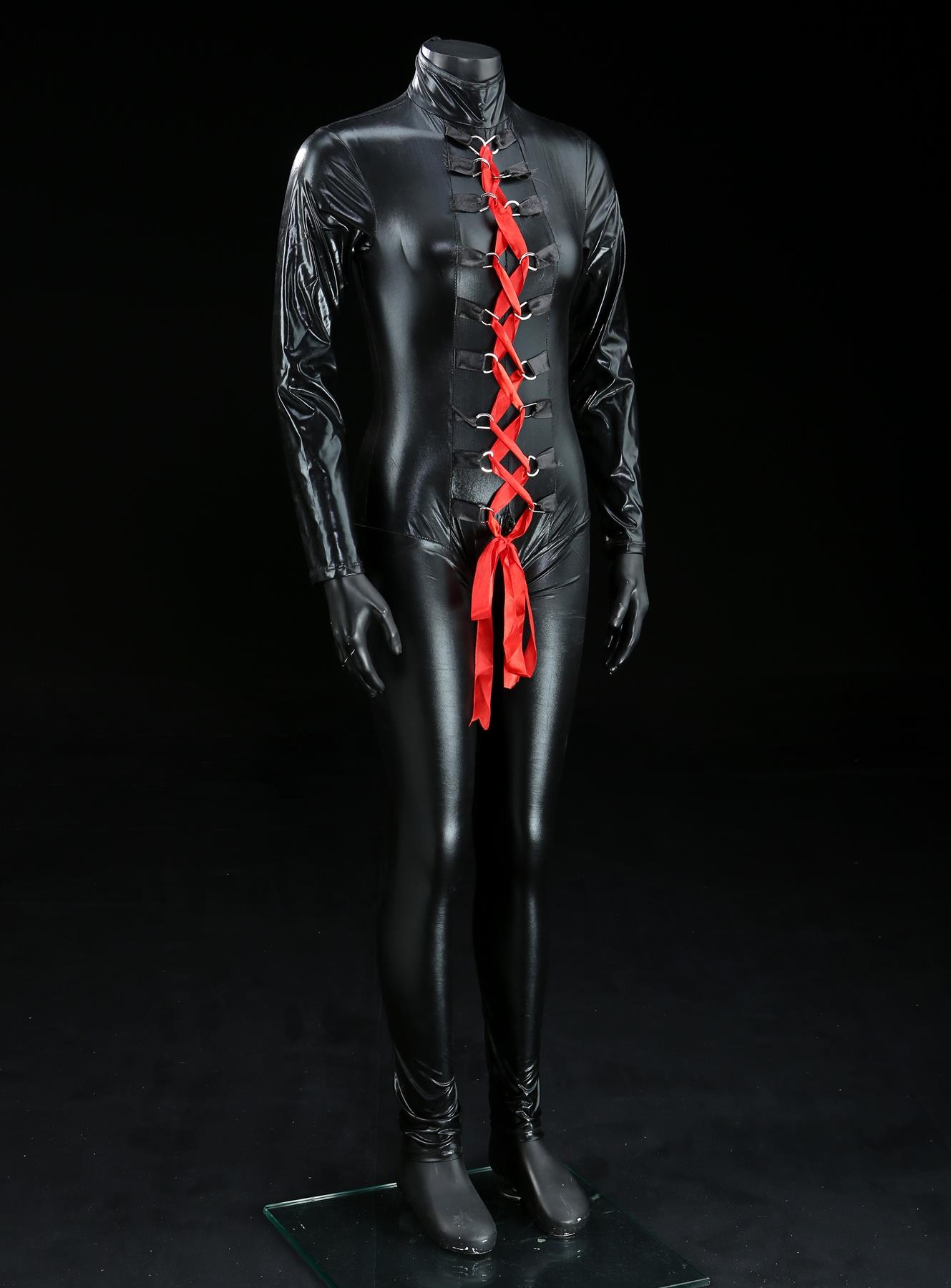 While the Auditor and Surgeon keep their mind on the task at hand, the stitch twins enjoy their time, dancing through nightmares and aiding the other Cenobites in tending to their victims. The makeup bust features silicone appliances on a rigid foam bust that are fully painted, with a long red ribbon cascading down from the back of the head. A similar ribbon adorns the front of the black body suit as well. 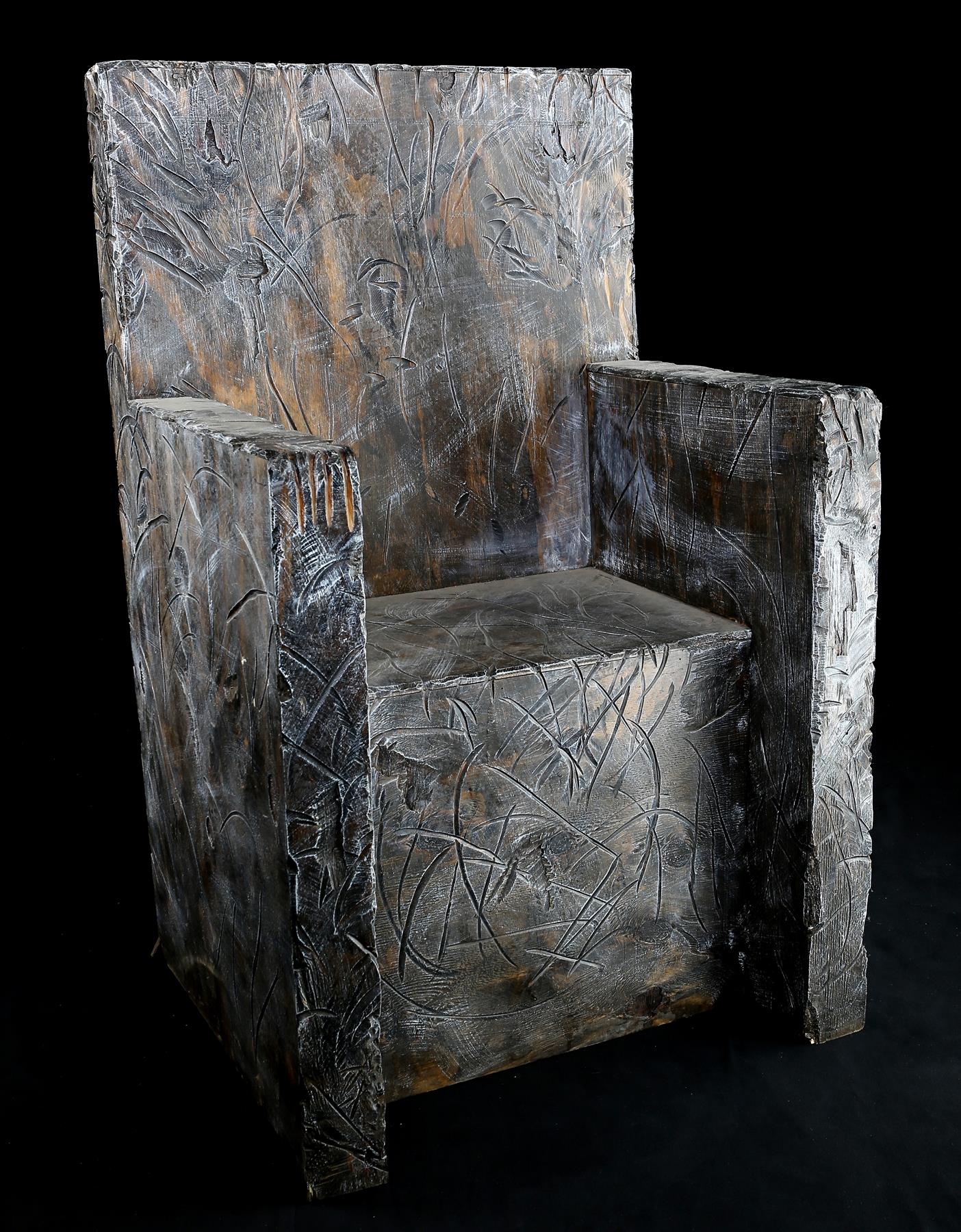 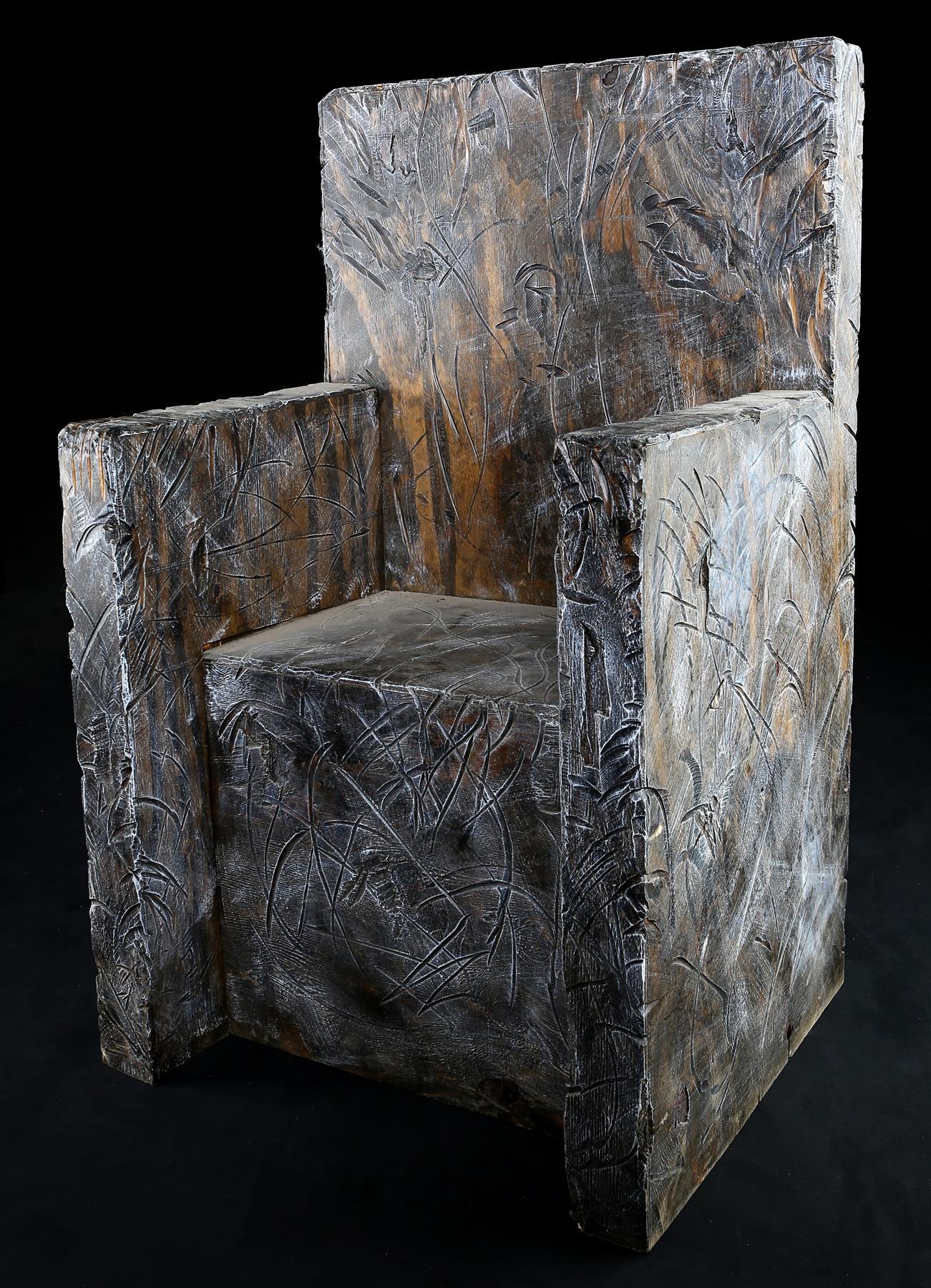 From his throne in his hell dimension, Pinhead sits and waits to be called to a new slaughter. This wooden throne is designed to fit the aesthetic of a hellscape, with its monolithic, slab-like construction and countless scratches, gauges, and scars throughout. You may have even noticed the deep nail grooves on the right arm rest. Could those be from Pinhead, or the poor soul he dethroned? 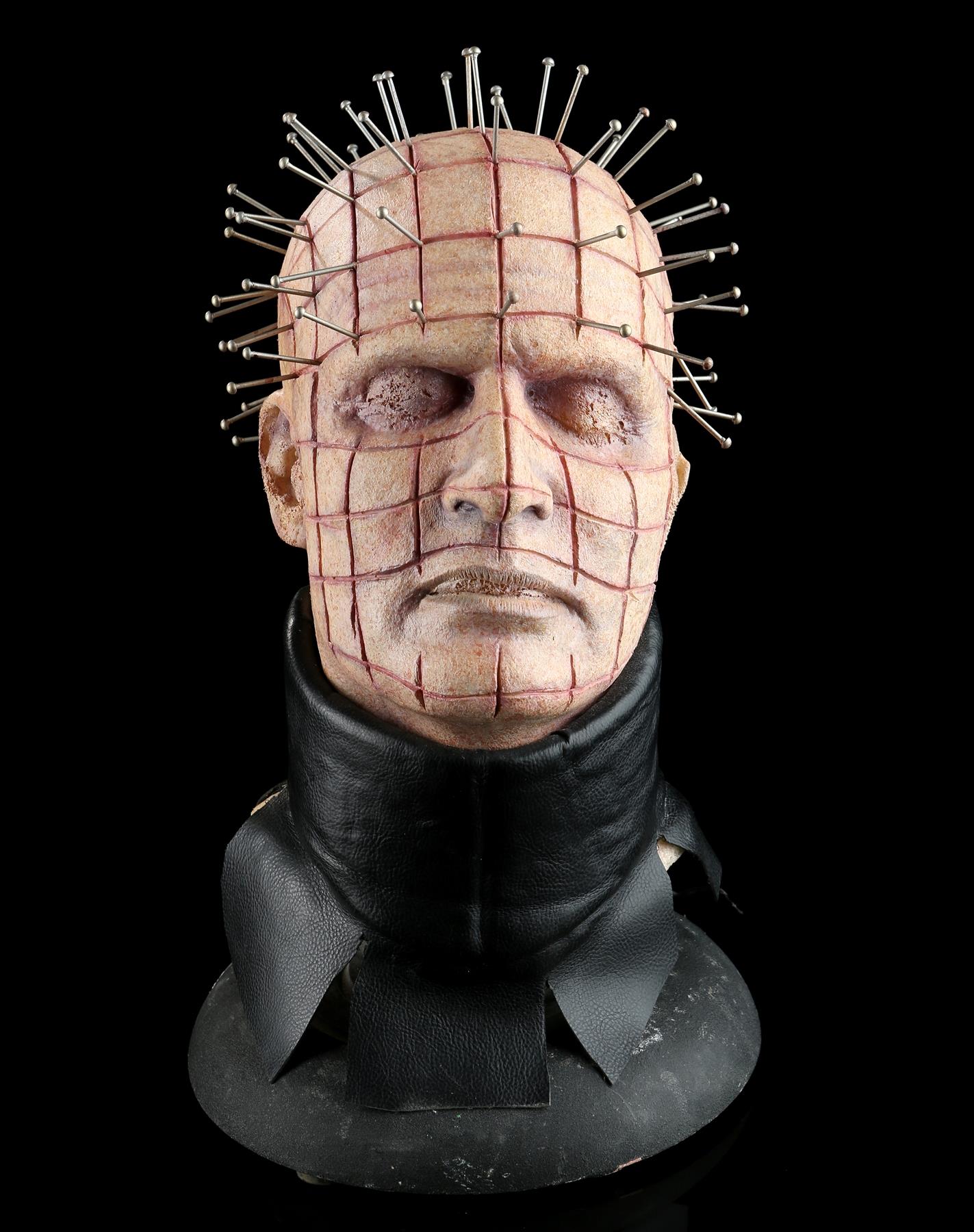 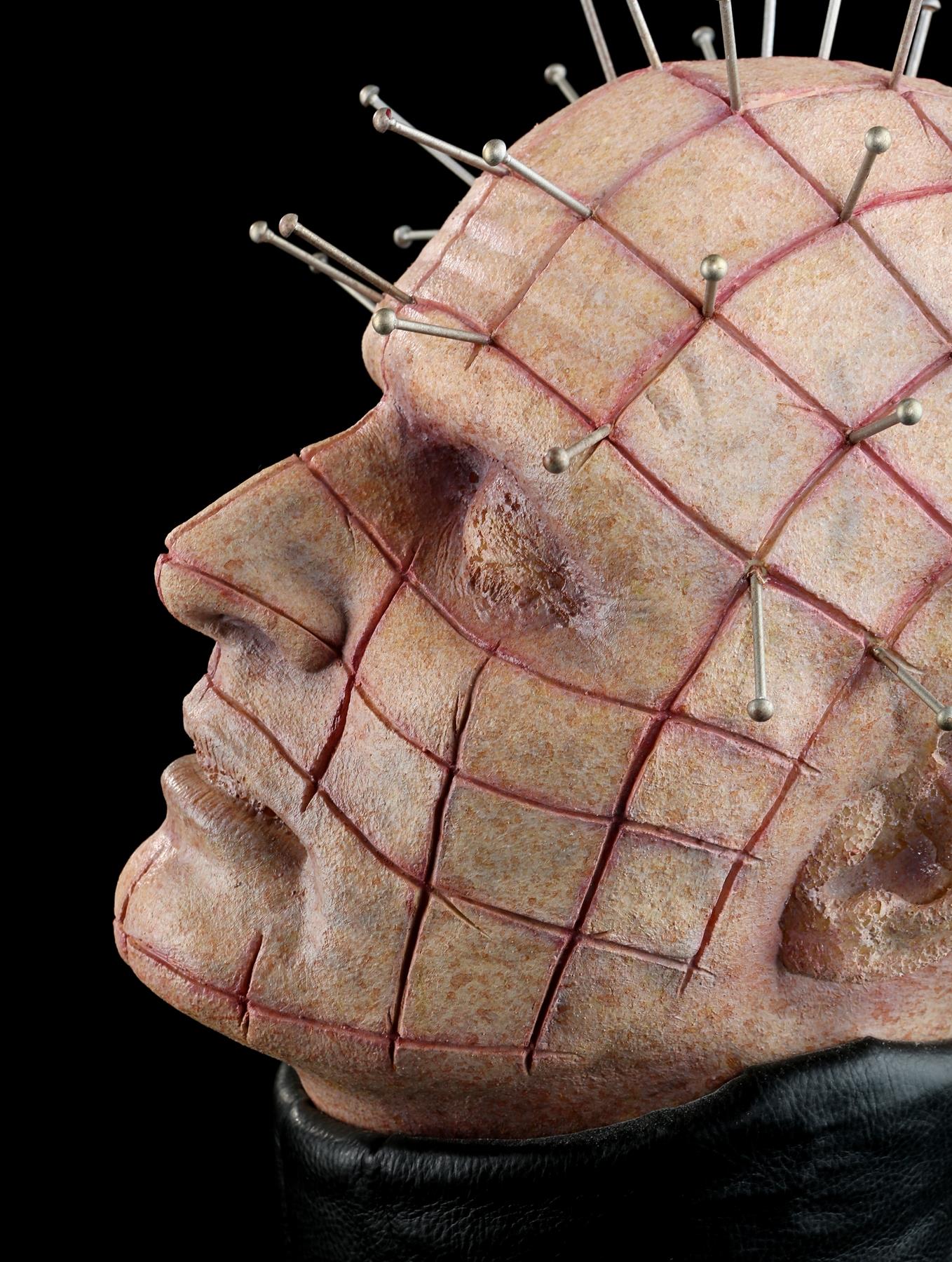 This is simply no Hellraiser without Pinhead. Whether born to evil or thrust towards it during life, Pinhead’s mysterious origins are of no consequence to his victims when he approaches. Eloquent and calm, this specter of death and pain made an appearance once again in the human world in Judgment before starting a new chapter in his ungodly life. The makeup bust’s design is unique to this film, with designer Gary Tunnicliffe making a few tweaks to the iconic design, including “open” and “floating” squares which were not present in the character’s previous designs.

These lots and many more are open for bidding now in Propstore’s HELLRAISER: JUDGMENT AUCTION Auction, with lots closing Friday, June 15th. Thank you for joining us for our blog coverage and be sure to check out our other articles in our auction series!

Share
Related Articles
07.06.2018  |  Uncategorized
Gary Tunnicliffe Interview Questions … Hellraiser: Judgment Auction
There is no Hellraiser without Clive Barker, and no Hellraiser: Judgment without Gary Tunnicliffe. From his early years working effects on the films to writing, directing, and starring in Judgment, Gary is an expert on all things Cenobite and one of the current architects of the Hellraiser franchise. We were lucky enough to sit down […]
24.07.2020  |  Collections
NOSTROMO: A Legend Born, And Born Again l Entertainment Memorabilia Live Auction – Los Angeles 2020
The cover piece for our first ever Los Angeles-based Entertainment Memorabilia Live Auction is the 11-foot long filming miniature of the Nostromo from Ridley Scott’s horror classic, Alien. This artifact has been a part of Propstore’s company collection for over a decade, but wasn’t always in the camera-ready shape you see it in now. Read […]
20.11.2020  |  Uncategorized
Batman and the Joker | Designing Gotham
In this blog, we are looking into the design of two characters who are the epitome of hero vs. antihero – Batman and his infamous arch nemesis, the Joker – and how over several decades, the look of both has dramatically transformed.
07.05.2015  |  Auctions
Lord of the Apes: The Masterful Primate Designs of Rick Baker
We’ve already explored a number of Rick Baker’s incredible creations, but it’s possible that the creatures most synonymous with Baker’s career are the myriad apes and gorillas that he brought to life on screen.
Sign up to be in the know