Designed by sci-fi visionary Ralph McQuarrie, in close, direct consultation with George Lucas himself, the stormtroopers’ monochrome, full-body-armour uniform is so strikingly, imposingly inhuman, many of us as children wondered if they were in fact robots: an efficient, unfeeling and overwhelming military force.

But there is a lot of character to Star Wars’ stormtroopers, thanks primarily to the way McQuarrie and Lucas’ designed the stormtrooper helmet. With the dark line across its forehead, those black, triangular eyes, and its distinctive “frown” (the downturned mouth-grill), it suggests a permanent bad mood. Just like the samurai on whose helmets and Menpo masks the stormtrooper helmets were based, these guys were not to be messed with.

But while they were conceived to remove all sense of individuality from each imperial trooper and make them all look intimidatingly identical, the stormtrooper helmet’s design underwent many changes — even during the production of Star Wars: A New Hope itself. With an extremely rare, screen-matched stormtrooper helmet featuring among the lots of this year’s Entertainment and Memorabilia Live Auction, here’s a brief history of one of cinema’s most iconic creations. 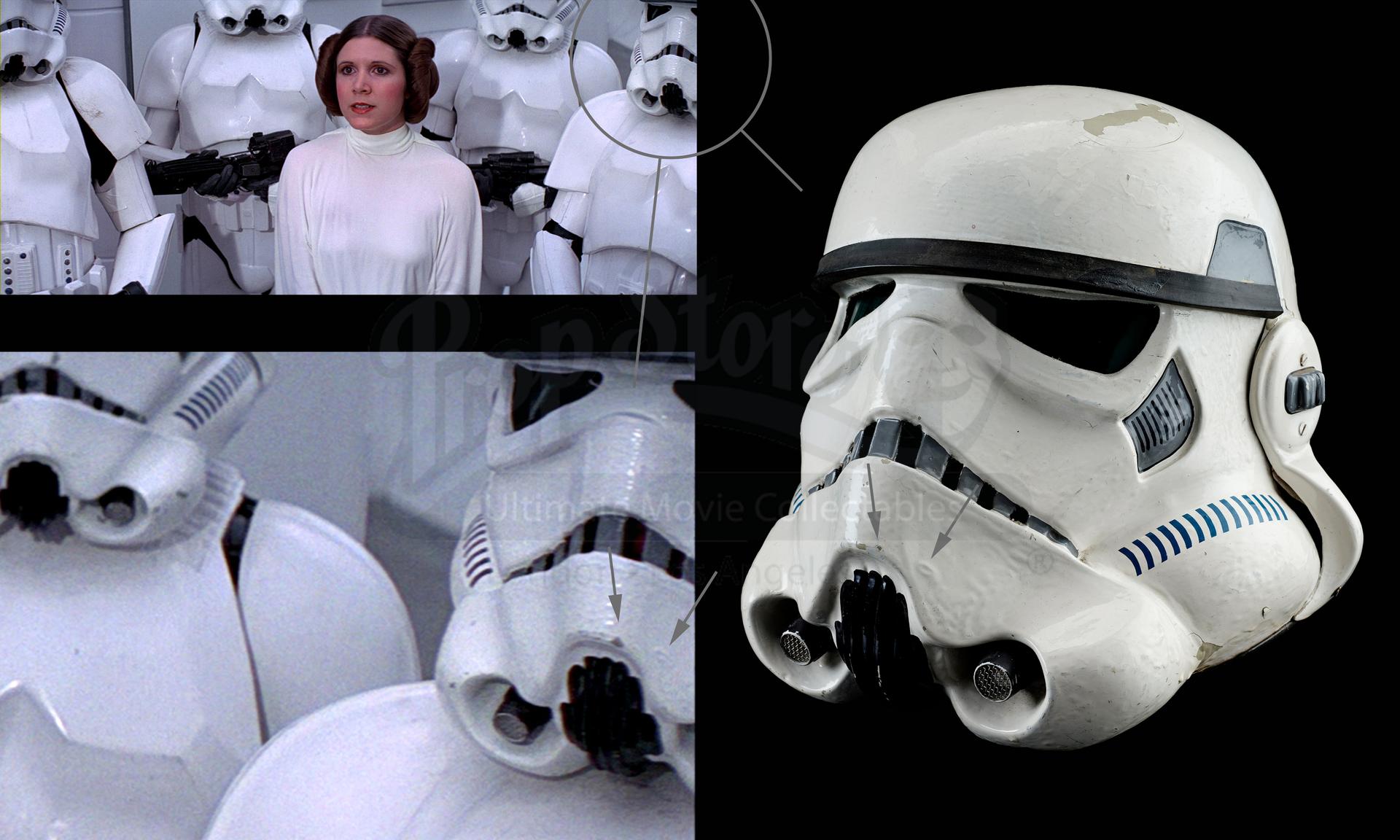 George Lucas and his creative team — including McQuarrie, costume designer John Mollo and production designer John Barry — had to create their space-operatic, fantasy galaxy from scratch, with a relatively small budget, at Elstree Studios in the UK. So the process of creating the plastic armour for the Empire’s shock troops required as much improvisation as it did innovation.

Once artist Liz Moore had sculpted the original design, Lucas required 56 helmets to be manufactured. Scenic artist Nick Pemberton remembered a neighbour of his, named Andrew Ainsworth, who had built his own plastic-moulding machinery, which he primarily used to produce kayaks and fish ponds. Ainsworth was engaged to create the items, and set about vacuum-forming them from high-density polyethylene (HDPE). However, after the first 27 helmets were created, it became obvious that the dark khaki-coloured HDPE wasn’t best suited to the production’s needs, especially for close-up work: it suffered shrinkage and distortion, and didn’t take the white-paint finish very well.

Which is why, for the six hero helmets — such as the ones worn by Mark Hamill and Harrison Ford in the film — Ainsworth switched to ABS plastic, which was easier to mould and didn’t need to be painted white, but far less durable.
This is why, if you look closely, you’ll see two different kinds of stormtrooper helmet in Star Wars: A New Hope. The HDPE, or stunt, helmets had a higher frown, while the frown of the hero, ABS helmets was distinctly lower and shorter.

When Lucas returned to his Galaxy Far, Far Away a few years later, with Irvin Kershner as director, he also returned to Elstree, where many of A New Hope’s stormtrooper helmets had been kept in storage, in good enough condition to be reused. So all the helmets seen in the sequel are the same as those which appeared in the original — 11 of them being those HDPE khaki-sprayed-white stunt helmets, and one a hero helmet.
However, John Mollo couldn’t resist adding a few minor tweaks to the design. The frown’s grey highlights were painted black, while vinyl decals were added over the previously hand-painted detailing. The eyes were also made a little larger, by trimming back the plastic around their edges. 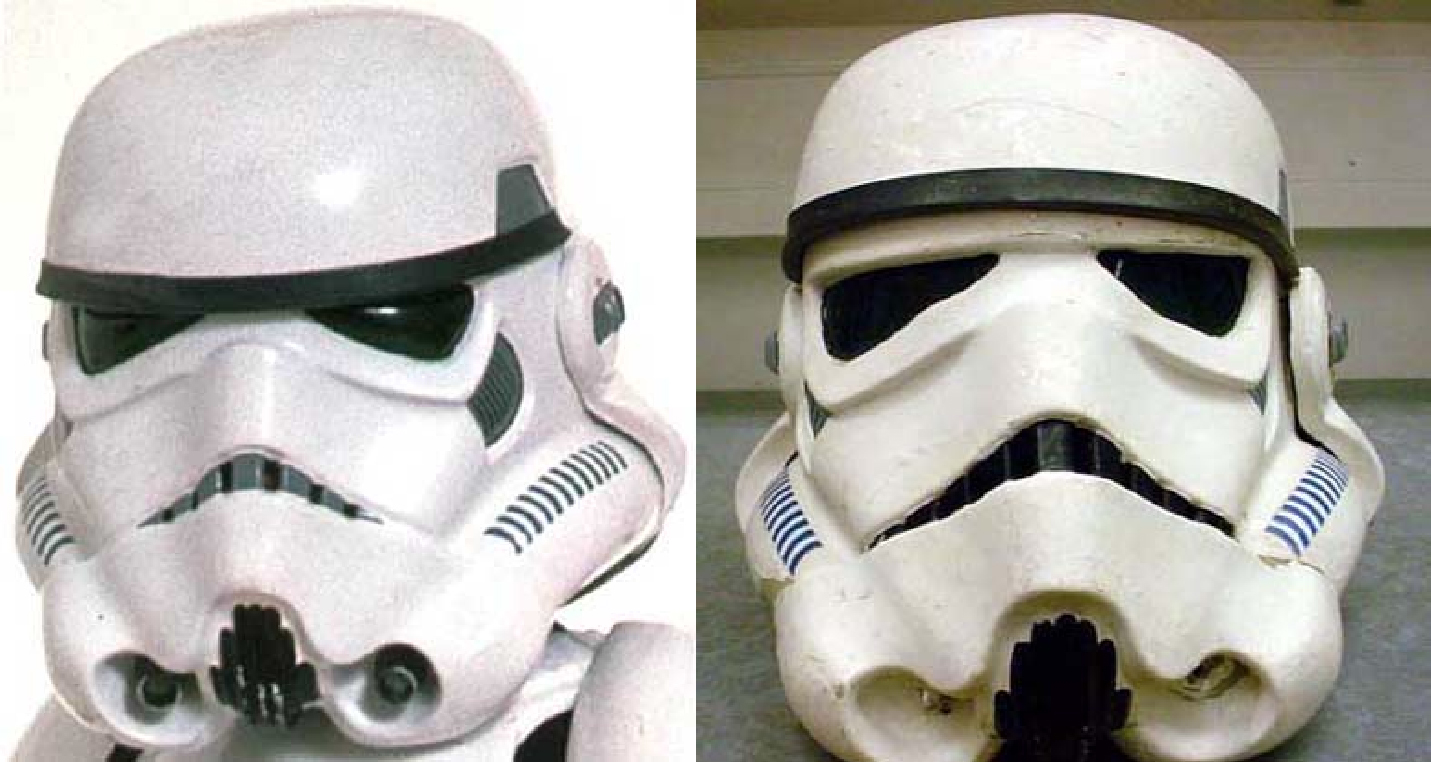 Reusing the original helmets was not an option for Lucas’ big trilogy-closer, directed by Richard Marquand. The epic, Ewok-bashing finale required far more than the dozen which appeared in The Empire Strikes Back, so another 50 were made from the original moulds.
Unfortunately, this didn’t go so well: the mould collapsed during the recasting process. Even so, the resulting helmets could still be used, as the effect of the mould-collapse was merely to make them look a little slimmer than the previous films’ helmets. Indeed, it could easily be argued that this sleeker look was an improvement. 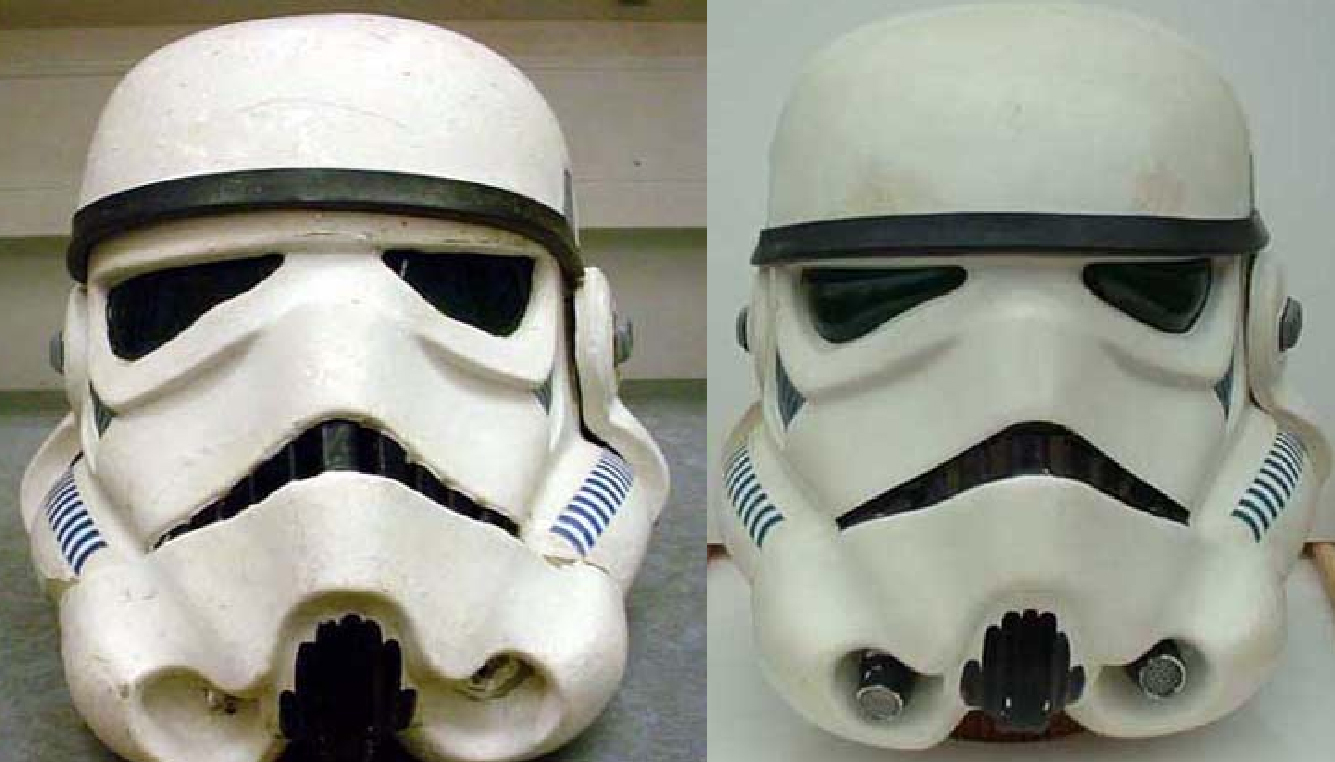 When JJ Abrams took on the franchise for its 21st century rejuvenation, he assigned his long-time costume designer Michael Kaplan to the task of reinventing the classic stormtrooper look for The Force Awakens’ First Order soldiers. Kaplan reasoned that the old stormtrooper armour would not be usable: “Audiences of today have become so sophisticated that a lot of things you could get away with in the past, you can’t anymore,” he told Vanity Fair. Yet Abrams didn’t want to move too far away from the original design, for obvious reasons.
So Kaplan essentially asked “What would Apple do?” resulting in a much slicker, simpler design, with the removal of the lower grille and the mic tips, and the frown losing its ‘teeth’, joining neatly up with the visor. At a glance, it’s still a stormtrooper, but look closer and it certainly strikes you as more ‘modern’.

Rian Johnson’s entry to the saga introduced further changes to the stormtrooper helmet design, albeit subtle ones. Keen to revert a little to the classic, original-trilogy look, he had it slimmed down a little and restored the ‘teeth’ to the frown, giving the overall effect of a far ‘meaner’ stormtrooper look. It’s not hard to argue, that had Lucas, McQuarrie and Mollo been designing A New Hope’s stormtroopers today, this is probably how they would have looked.