In Raiders of the Lost Ark, the streets of Kairouan, Tunisia represented Cairo, Egypt. Most of these places look very similar today. Note the three windows on the right hand side of the alley here. 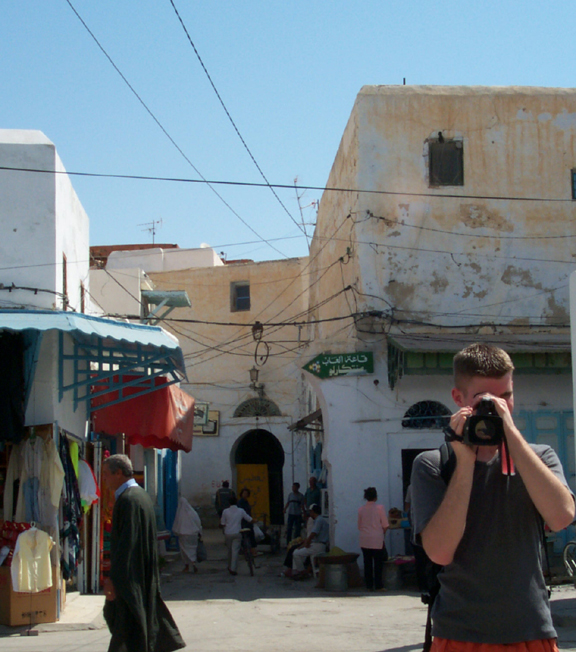 The top of the archway seen in the film has since crumbled away, but you can make out the right edge of it by the green arrow sign. 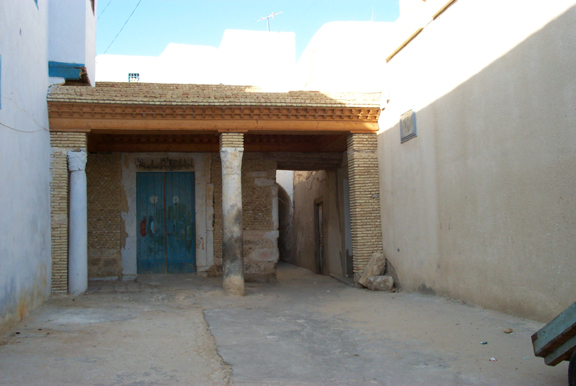 The vertical plaster columns and horizontal woodwork are all set dressing from Raiders that was left behind.

This small alcove, near the entrance to the medina, was the site of the opening fight in Cairo. 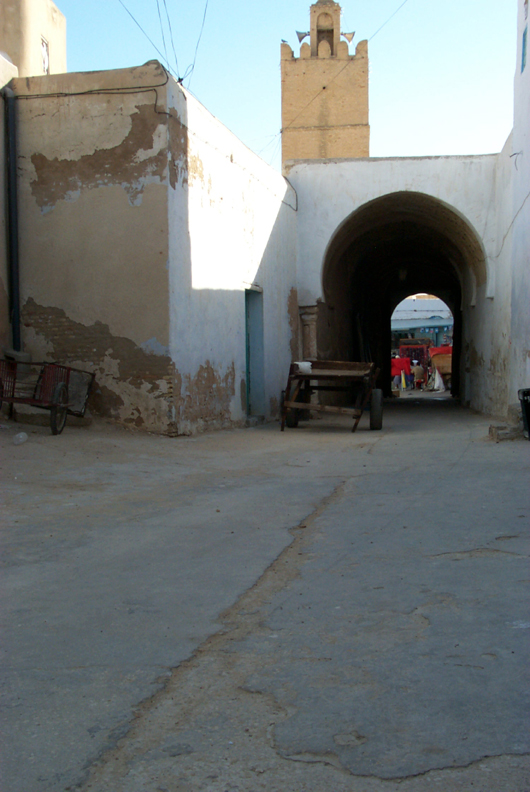 This small alcove, near the entrance to the medina, was the site of the opening fight in Cairo. 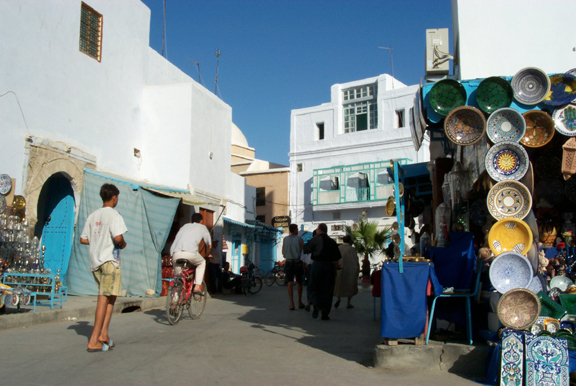 Note the dinner plate stand on the right, still there twenty-one years later. Not all of the locations had to be redressed. 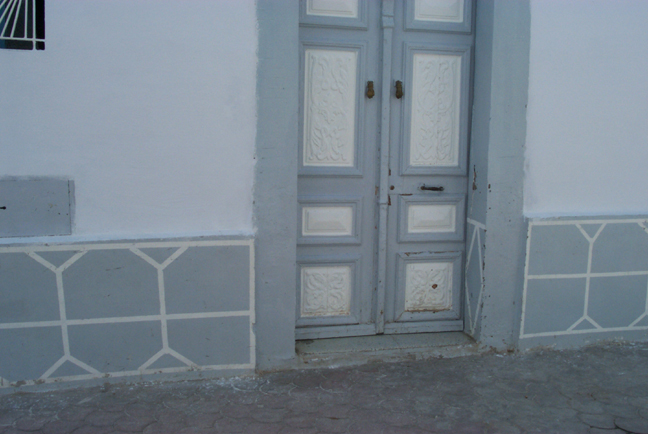 This building had been completely repainted, but it is the same place. The wood carving on the doorfront can be matched. 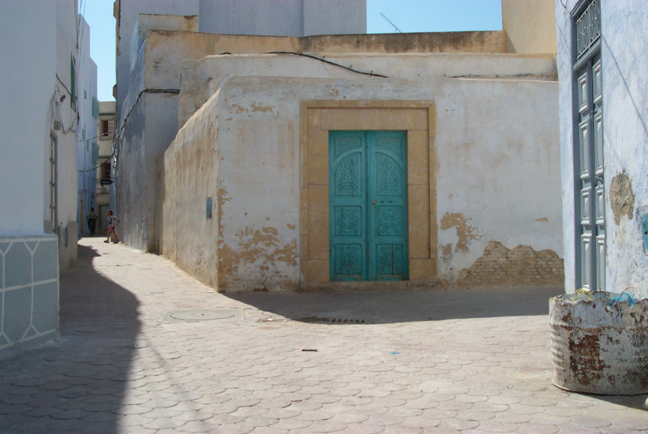 This is one of the most difficult places to find, as its outside of the medina that contains most of the Raiders locations in Kairouan. 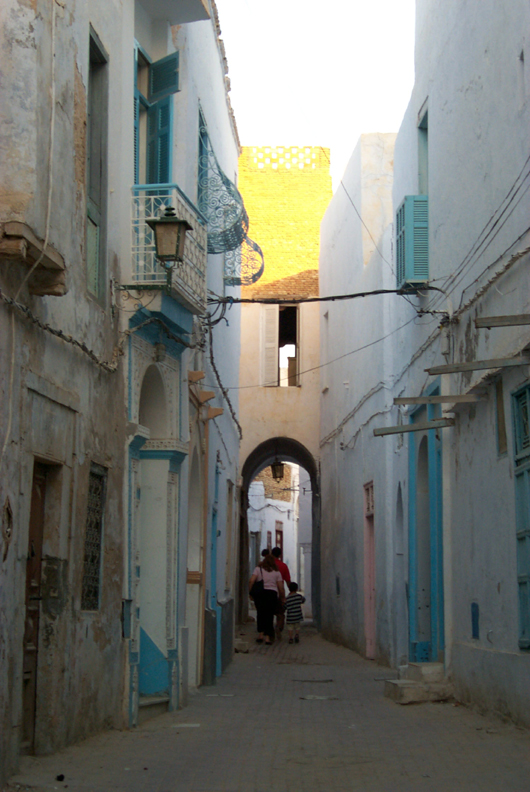 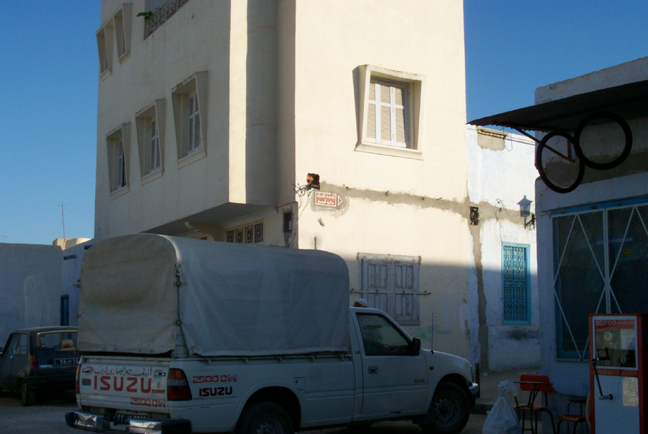 This building is on one side of the square where Indy shoots the Swordsman. The rest of the square looks fairly different today some of the buildings in the film may have been built for production. 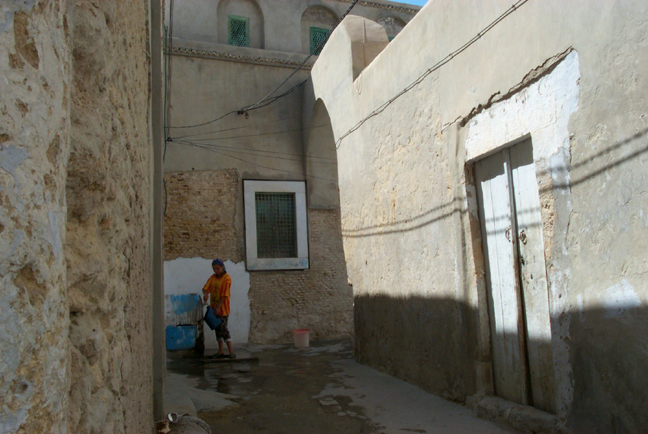 A number of the alleyways from this sequence are very close to each other, geographically.

Again the door has been repainted, but is clearly the same location. 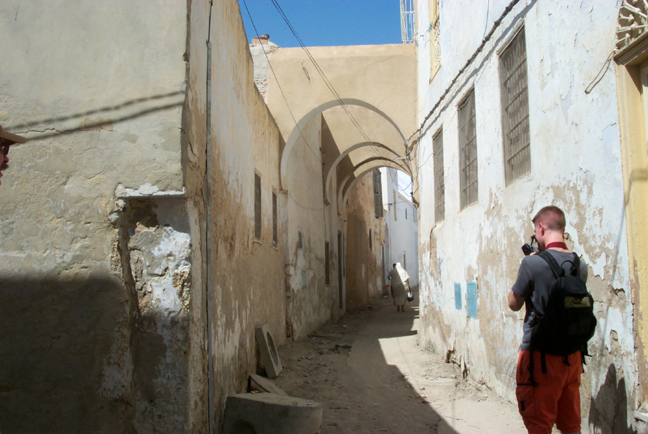 The same alley from the top shot on this page. 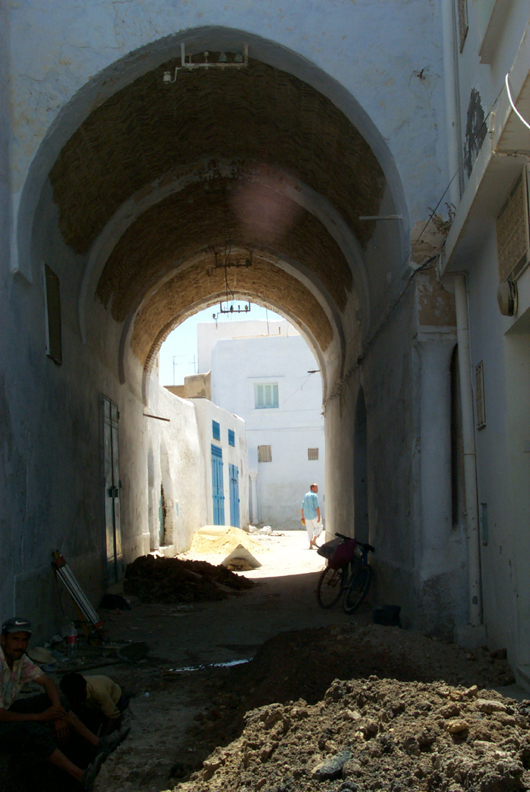 Note the two doors with windows above them on the left, at the back of the alley. 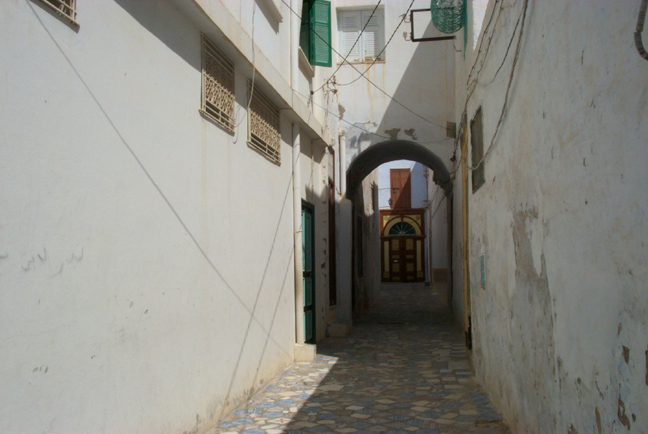 The distinct, ornate doorway made this location an obvious one. 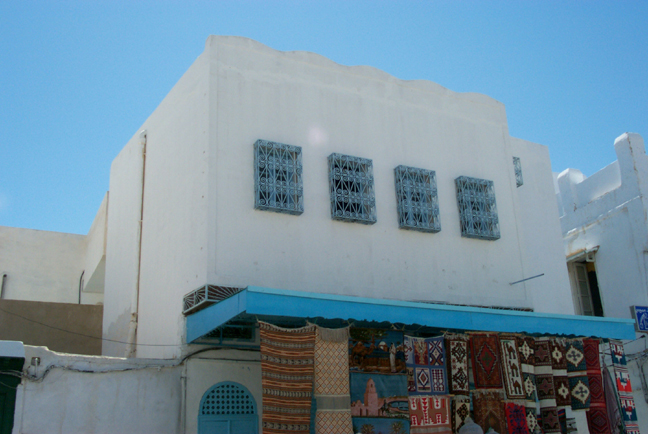 Not much has changed here. 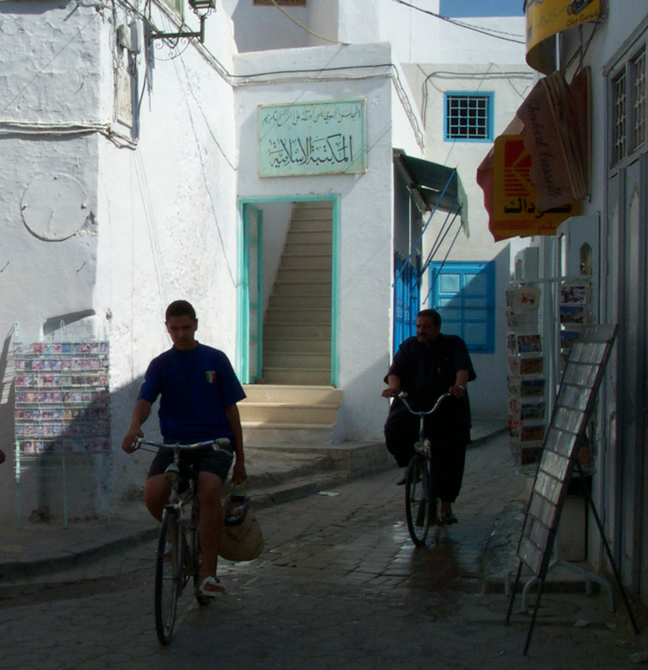 This location was difficult to find at first, as the blue doors typically remain closed, concealing the yellow staircase. 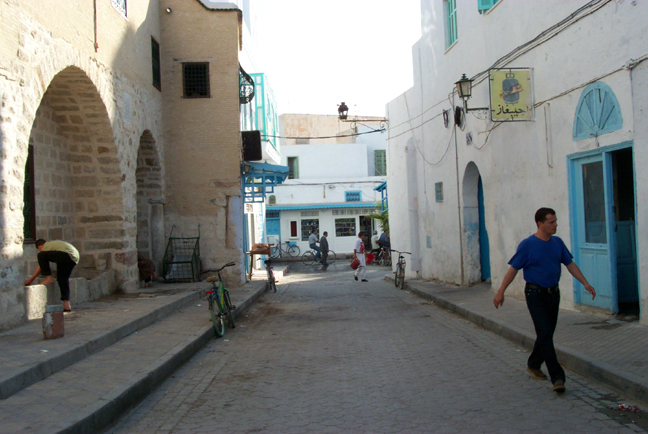 This is the street where Indy shoots the truck driver.

Reverse shot of the above street, which has since been repaved. Note that the truck is headed directly for the building ahead when Indy shoots the driver, the street does not open up into the large square, and the truck would have immediately crashed in the building if not for a quick edit! 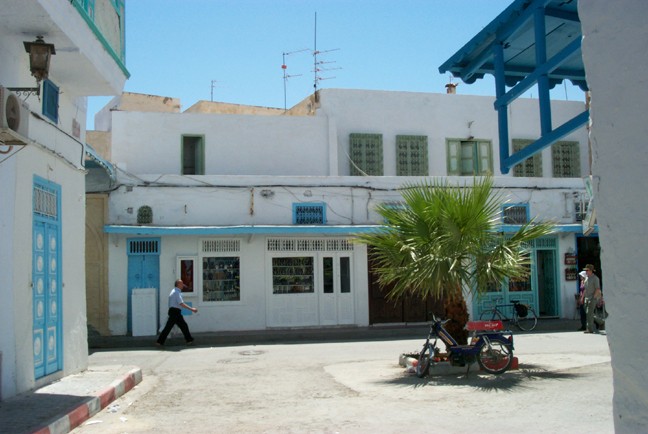 This is the opposite end of the same street. 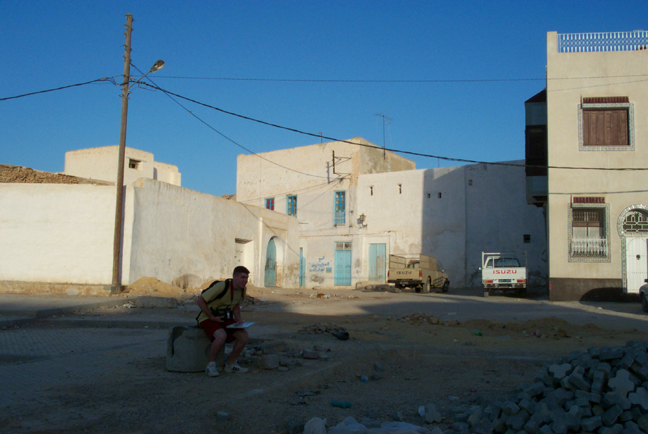 This square, which has since seen some development, is also outside of the Medina. 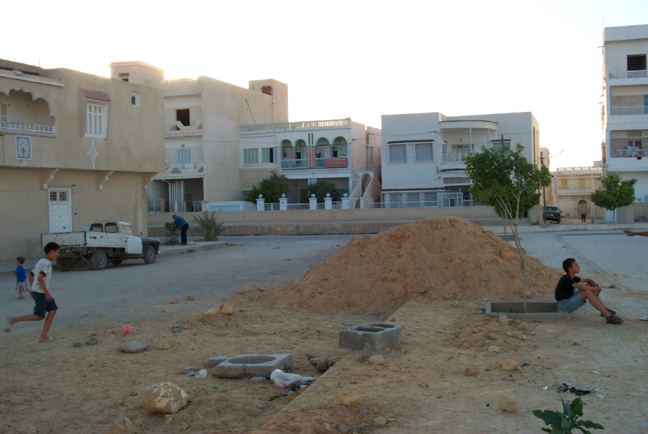 Reverse shot of the same open square, where the truck flipped and exploded. 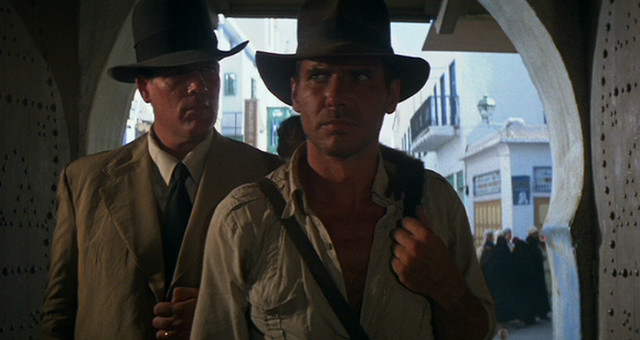 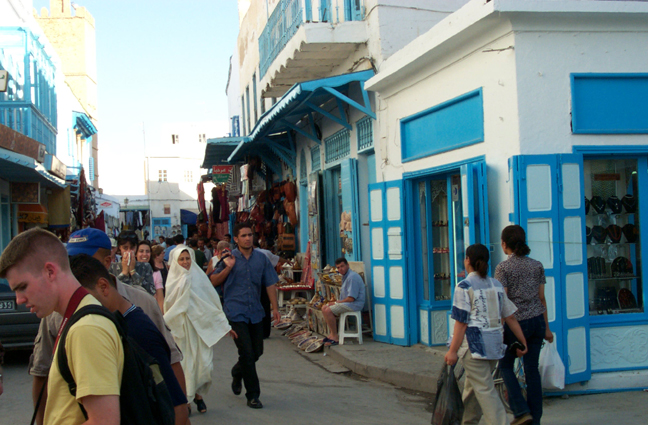 Note the balcony on the right side, this is the same street. 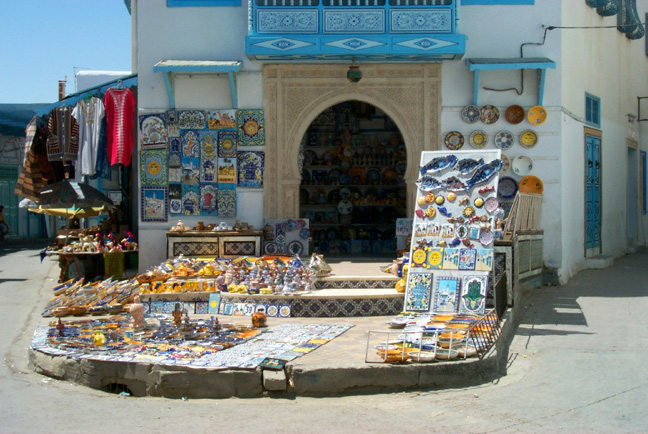 The Marhala Bar, which had the interior filmed has well, has since been split up into several properties. This one is another plate shop.