The world of The Twilight Saga is filled with incredible characters and fascinating dynamics, but no romance is more magnificent than that of Bella Swan and Edward Cullen. Throughout the saga, their relationship made up the emotional core of the narrative, and its strength is what keeps so many fans coming back to the stories over and over again. Let’s take a look at some of the most memorable Bella and Edward lots in The Twilight Saga Live Auction…

Everyone remembers their first day at a new school, but few people can say they met their soulmate that day as well. It was in the Forks High School cafeteria where Bella first caught a glimpse of her future husband—Edward Cullen—and his family. Twi-hards will remember Bella’s Crown Bowling Supply shirt from the scene, as well as Edward’s grey thermal. Articles of these costumes are labeled “TW” for the first film, while Bella’s pants are labeled “NM” and “EC,” referring to later films in the saga and indicating they were transferred from production to production as the films progressed. 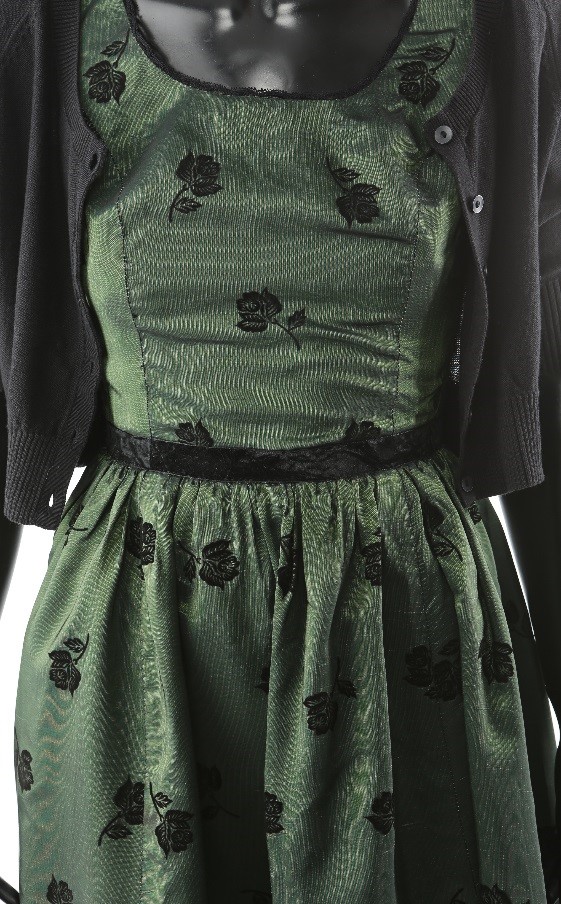 When the Cullen family decided to throw Bella a birthday party, Bella and Edward dressed accordingly for a quiet soiree at the family’s house. Bella’s green satin dress, a present from Alice, features a delicate floral pattern throughout. Also available in the auction is a bloodstained version of the dress from after Bella’s altercation with Jasper. Edward’s wool suit and blue button-down shirt was seen in this sequence and several others throughout the film until his reunion with Bella in Volterra. This example is a harness version, meaning holes have been cut to allow the costume to be worn over a stunt harness.

This Bella costume comes from one of the most important moments in the characters’ life when, while spending a quiet night in together, Edward proposed to Bella. The film’s initials “EC” are written in each piece of the costume. Edward Cullen’s snowy battle costume comes from the film’s climax and Edward’s final confrontation with Victoria. The shirt and pants in this lot are decorated with imitation snow from his battle on the mountain top. 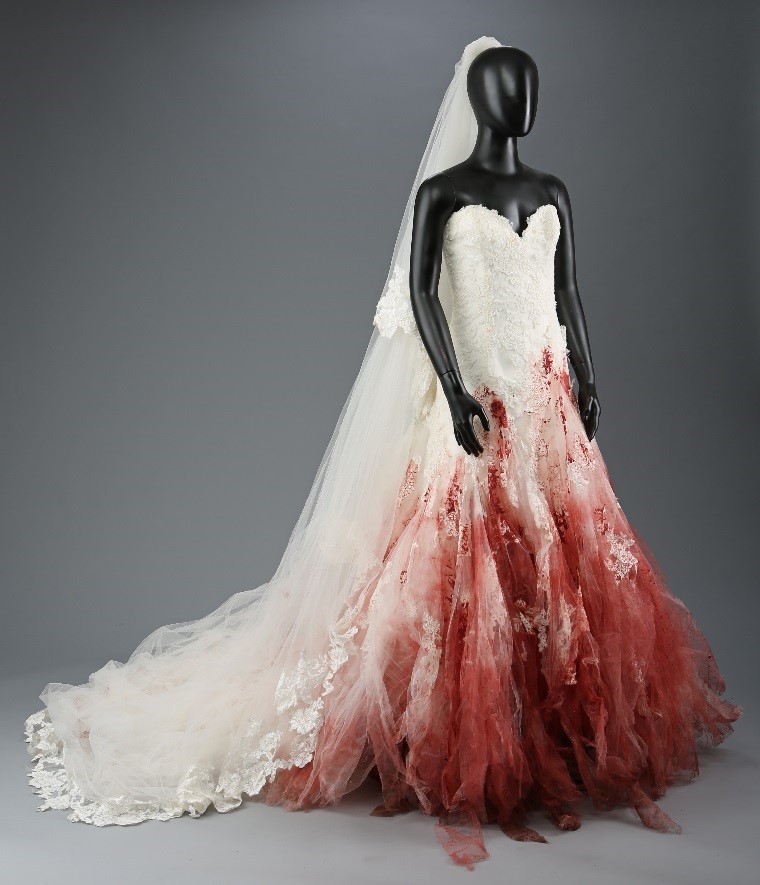 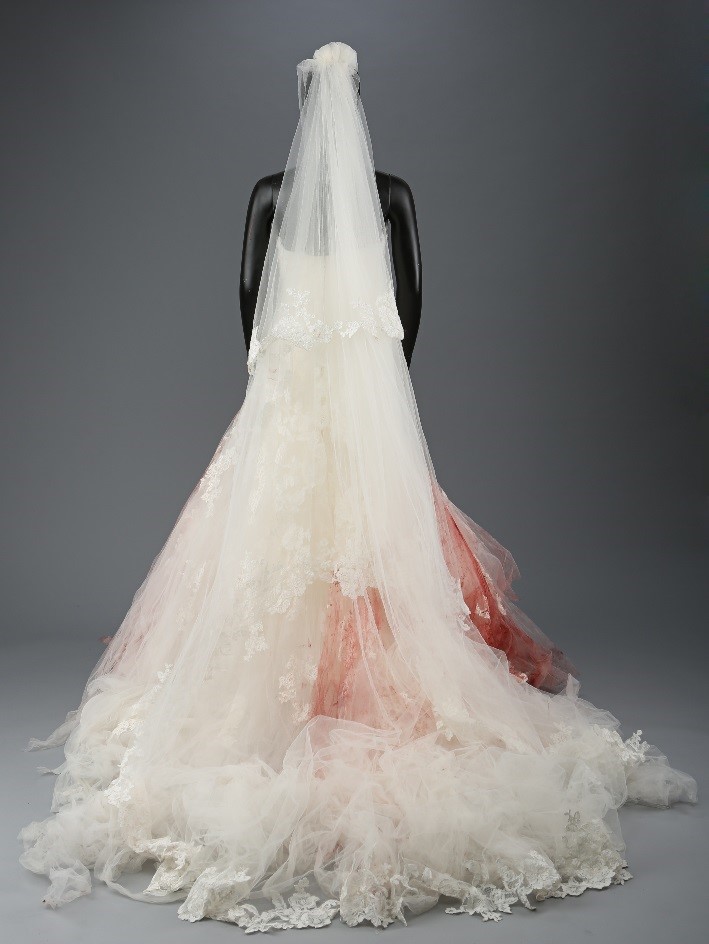 While The Twilight Saga: Breaking Dawn – Part 1 saw Bella and Edward finally tie the knot, a foreboding air lingered throughout the film, highlighting the uncertainty of the couple’s future together. No scene displays this more prominently than when Bella dreamt of her happy day taking a murderous turn. In the dream, when Bella found the Volturi officiating the wedding, she turned to see that she and Edward were standing on a massive pile of their friends’ and families’ bodies and that their clothes were bloodstained from the carnage. These complete costumes are stained with stage blood from the final shots of this sequence and are easily two of the most memorable lots in the entire auction.

After five movies, The Twilight Saga culminated in a final battle between the Cullens and their small band of allies against the Volturi’s forces. In this epic finale, Bella and Edward stood their ground in the snow, side by side, to defend their daughter’s life as a family. Both Bella and Edward’s final battle costumes are complete and feature distinctive jackets that will be easily recognised by The Twilight Saga fans, as the styles were used in numerous publications and advertisements for the final film.

These lots and many more are on offer in Propstore’s The Twilight Saga Auction, being held on November 19th and 20th at the TCL Chinese Theatres in Hollywood, CA. So Register Now to bid online or over the phone and check back soon for another look at some exciting pieces from the auction!

Share
Related Articles
14.11.2017  |  Auctions ,  Uncategorized
Propstore Presents.. Curated Cullens: Set Dressing in ‘The Twilight Saga’
With an eternity ahead of them, the vampires of Forks, Washington needed creative ways to fill their time and keep their minds engaged with the world. While some vampires took part in far less savory creative outlets, the Cullen family seems to have made art collecting their hobby, and decorated their house with an eclectic […]
14.11.2016  |  Auctions
Propstore’s Twilight Saga Auction Presents… Leader of the Pack: Jacob Black’s Auction Lots
Jacob Black is one of only a few constants in Bella Swan’s life. From childhood friend, to romantic interest, to Renesmee’s protector, Jacob and the wolf tribe’s relationship to Bella and the Cullens is constantly growing and changing throughout The Twilight Saga. Take a look at some of the stand out pieces in our auction […]
18.11.2016  |  Auctions
Propstore’s Twilight Saga Auction Presents… A Family Affair: The Cullens of Forks
The Cullen family was not formed by blood, but by bond. Having lived through countless lifetimes, Carlisle and Esme Cullen have created a strong family unit in their tasteful Forks home and have given their “family” every chance they could to survive and be happy while keeping their secret safe. Take a look at some […]
|  Auctions
Propstore’s Twilight Saga Auction Presents… Those Who Make the Rules: Shedding Light on the Volturi
The old adage that heroes are only as good as their villains is never truer than when it comes to the Cullen family and the leaders of the vampire world, the Volturi. Keeping a watchful eye from their thrones beneath the streets of Volterra, Italy, the Volturi are somehow always close to the action in […]
Sign up to be in the know