Monty Python and the Holy Grail (based around the Arthurian legend) was their first proper feature film, with all-new material. It was filmed in Scotland on a miniscule budget of £229,000 (partly funded by contemporary rock stars Pink Floyd, Led Zeppelin and Jethro Tull).  After the success of that film, they moved into more controversial territory with The Life of Brian, a film lampooning the New Testament era. Its gentle humour won over audiences, and it still consistently rates as one of the most popular comedy films ever made. Monty Python’s final film, The Meaning of Life, is a much darker affair, following the ages of man from birth through to death. At the time of the film’s release in 1983, the Pythons admitted that it had been their intention to offend ‘’absolutely everyone’’ with this movie! 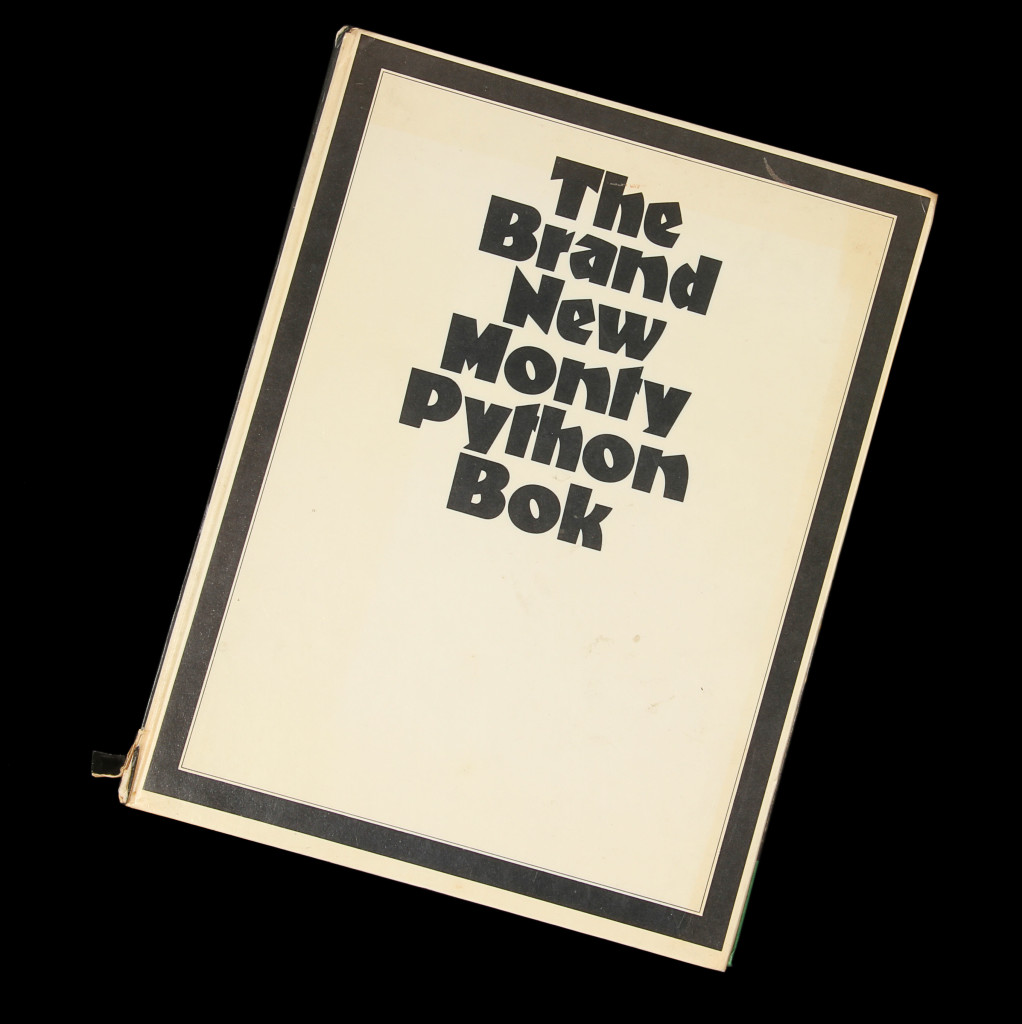 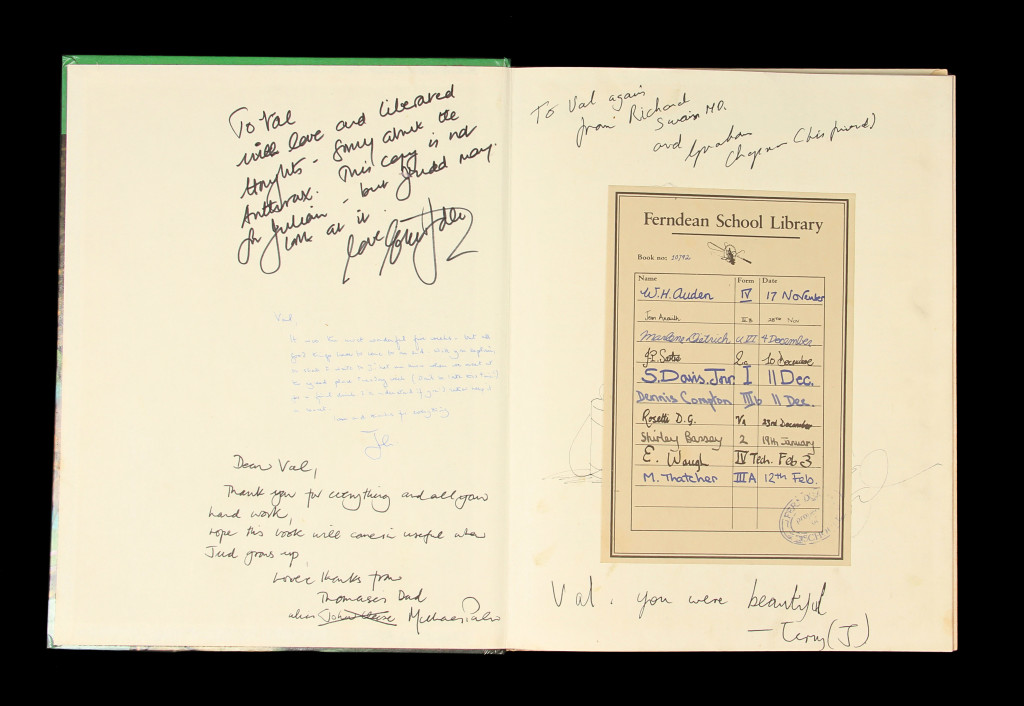 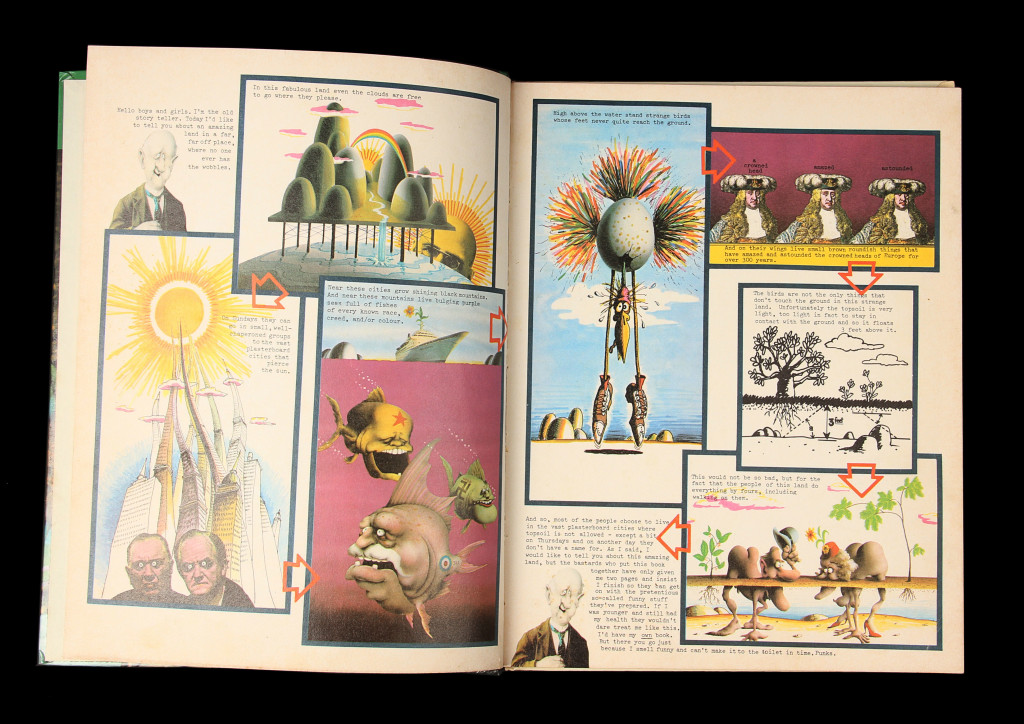 This autographed hard-back copy of The Brand New Monty Python Bok comes from Valerie Chapman, a renowned model maker who had worked with the Pythons. The book is written in the style of Monty Python’s Flying Circus, with jokes, illustrations and storyboards. All six members of the Python team signed the book and inscribed it to Charlton, plus Terry Gilliam also added a hand-drawn sketch. 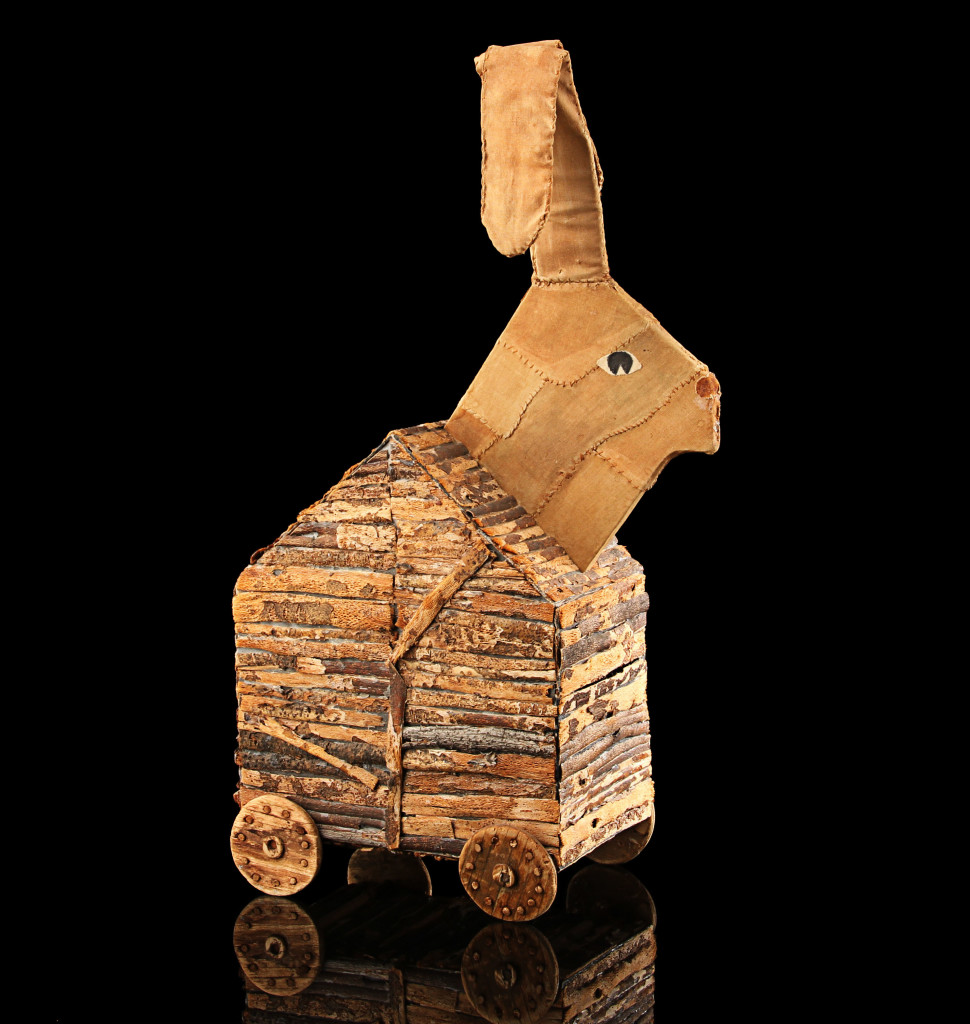 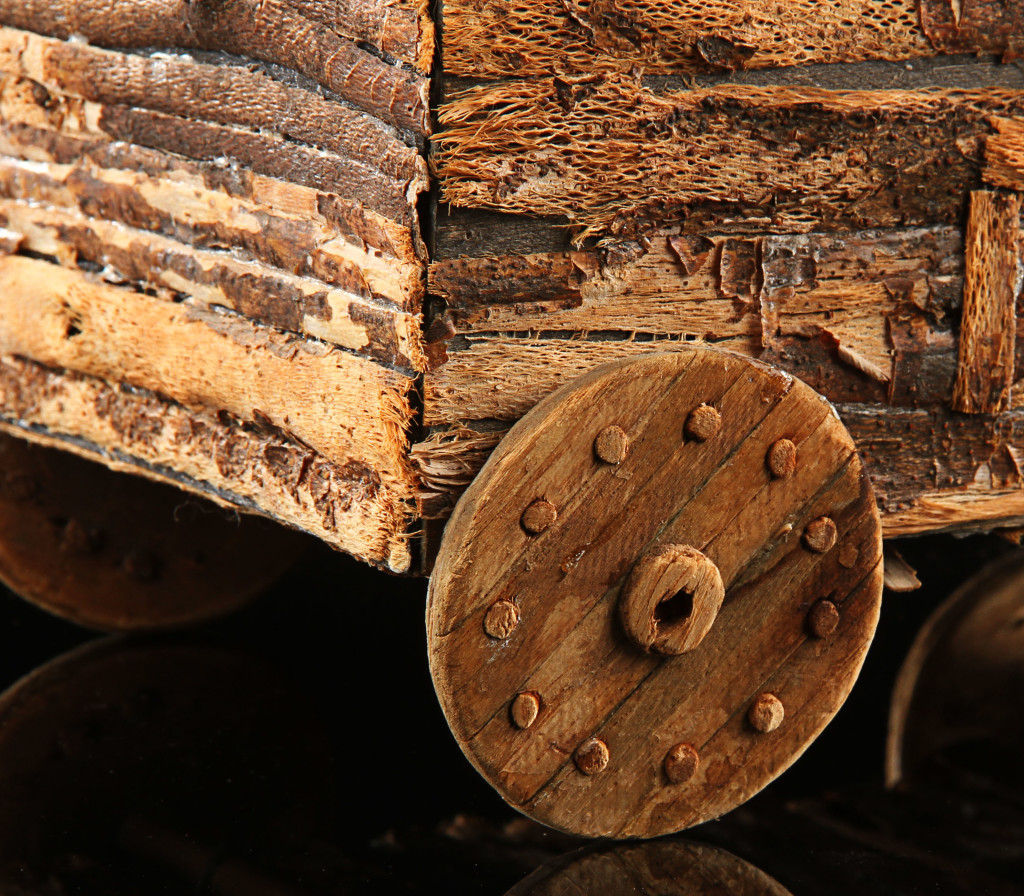 In the Monty Python movie Monty Python and the Holy Grail, King Arthur used a Trojan Rabbit to try to infiltrate the French castle. A full-size model was used in some location scenes, and this miniature model rabbit was specially created by renowned model maker Valerie Charlton for other scenes. The model is made of balsa wood, with four wooden wheels. It is accompanied by a detailed letter of authenticity, plus a lavish book about the making of the film with extensive handwritten notes by the maker, Valerie Charlton. This is a very special lot which has already generated a lot of interest after being displayed at the Prop Store Comic-Con 2016 Live Auction Preview booth. 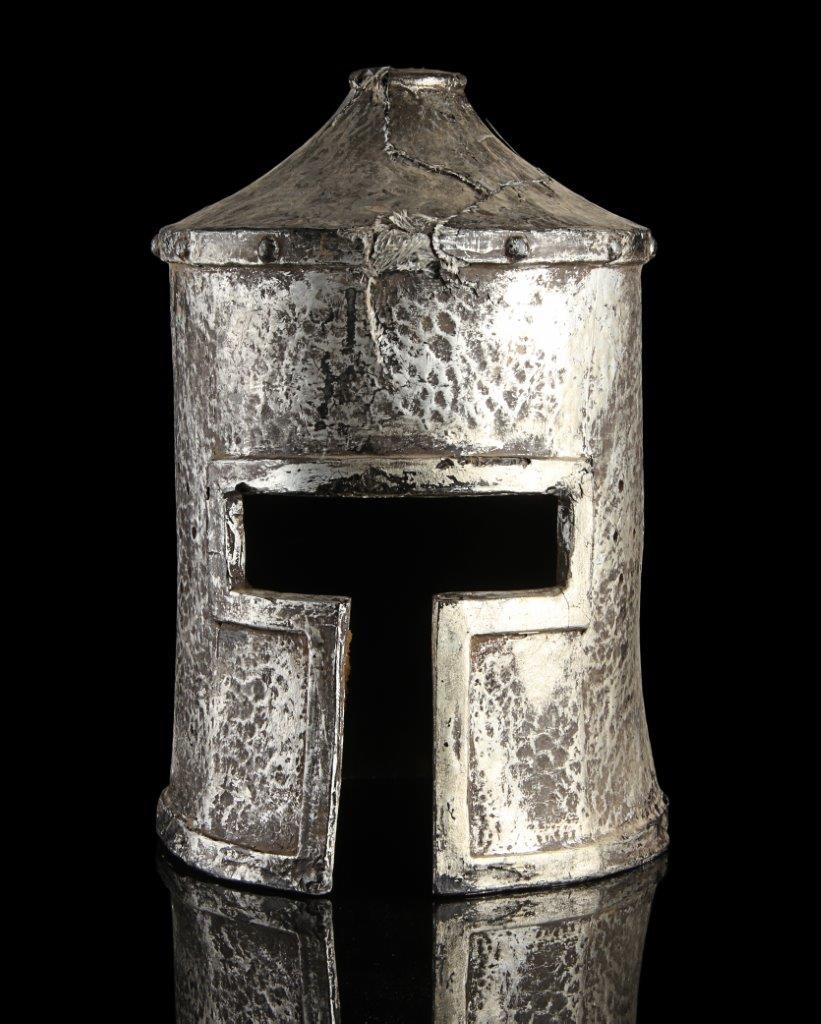 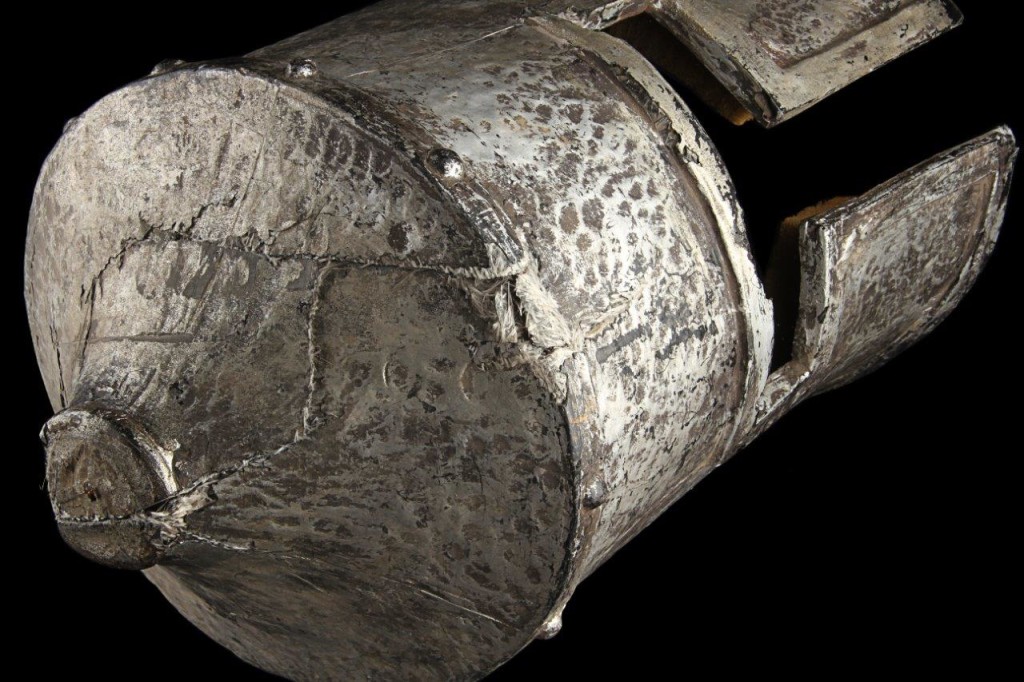 Knights Of The Round Table Helmet, MONTY PYTHON AND THE HOLY GRAIL (1975)

This helmet was used in the Monty Python movie, Monty Python and the Holy Grail. The Knights of the Round Table used their helmets in a musical sequence as they approached Camelot.  It is made of fibreglass with faux-rivet detailing, and lined with foam.  The helmet represents an affordable opportunity to collect a little bit of Python movie magic! 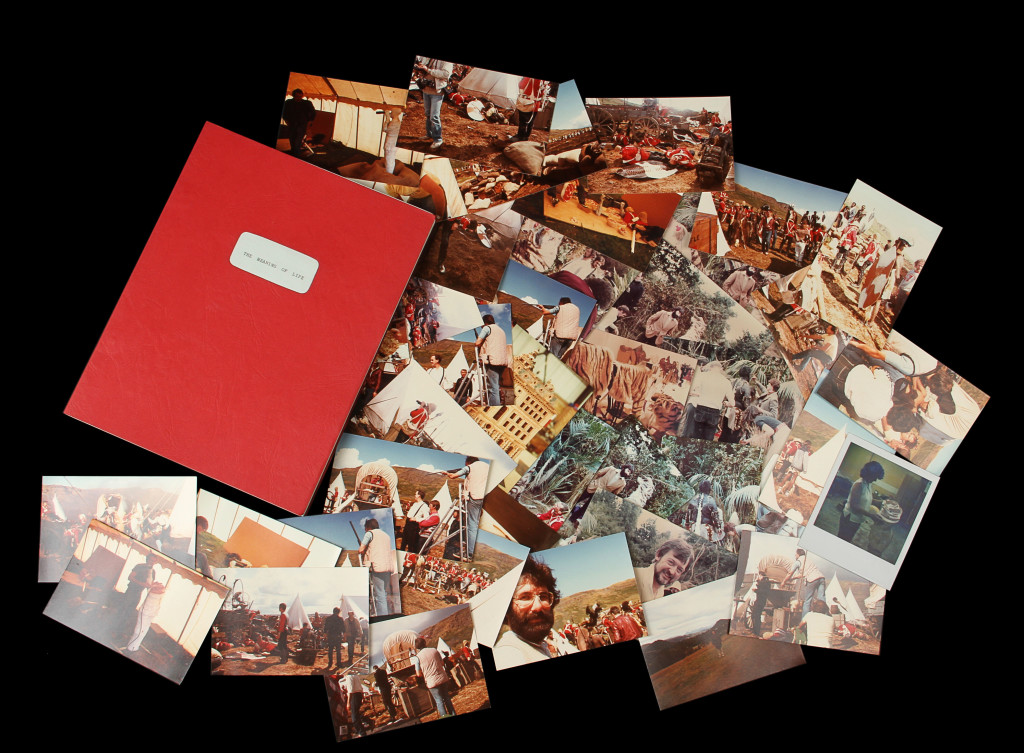 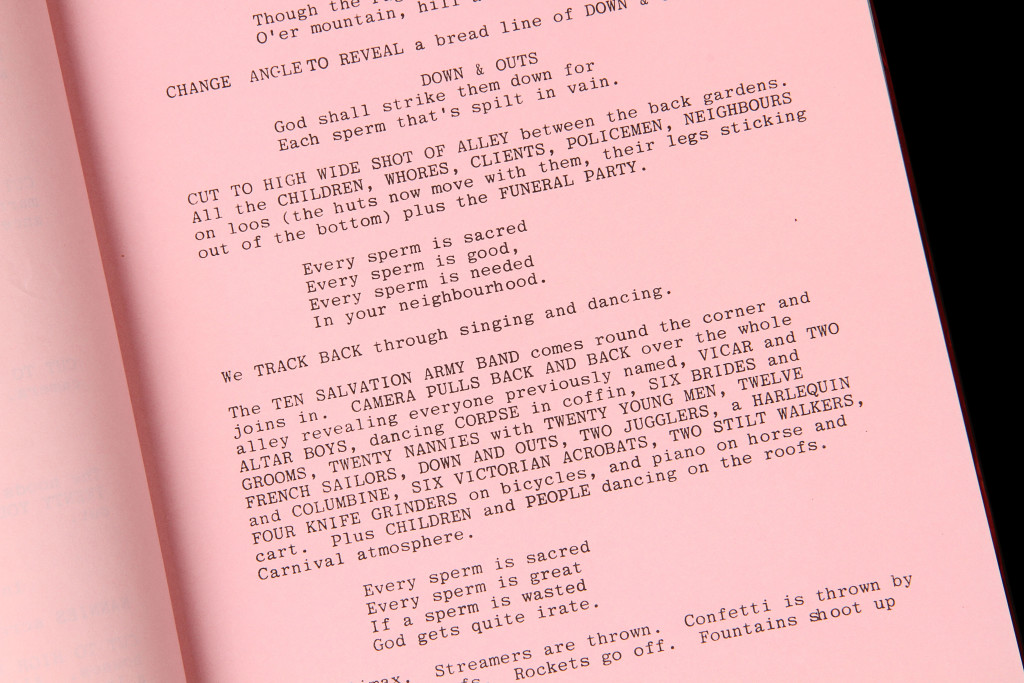 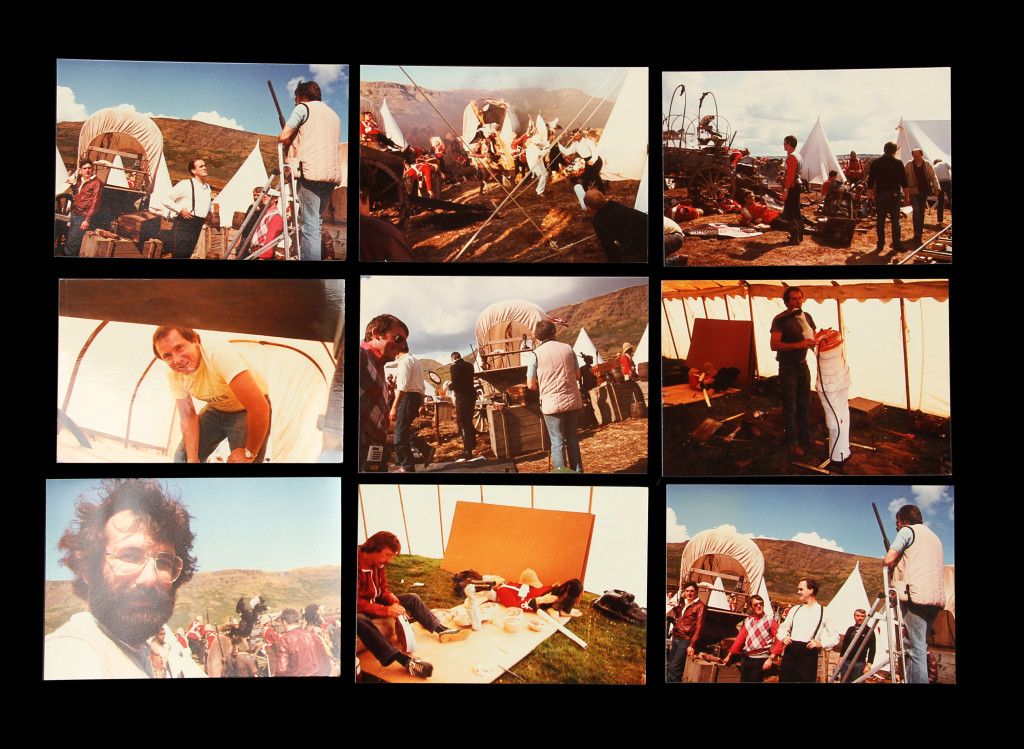 This is another item from the personal collection of model-maker (and Python collaborator) Valerie Chapman. It is an un-annotated 115 page script, dated March 1982, which is bound in a red card cover with brass pins, and includes pink and blue revision pages. The script is accompanied by 47 on-set photographs, including some taken in preparation for the Anglo-Zulu war scenes, taken by Charlton herself.  These help to give a real personal insight into the making of The Meaning of Life. 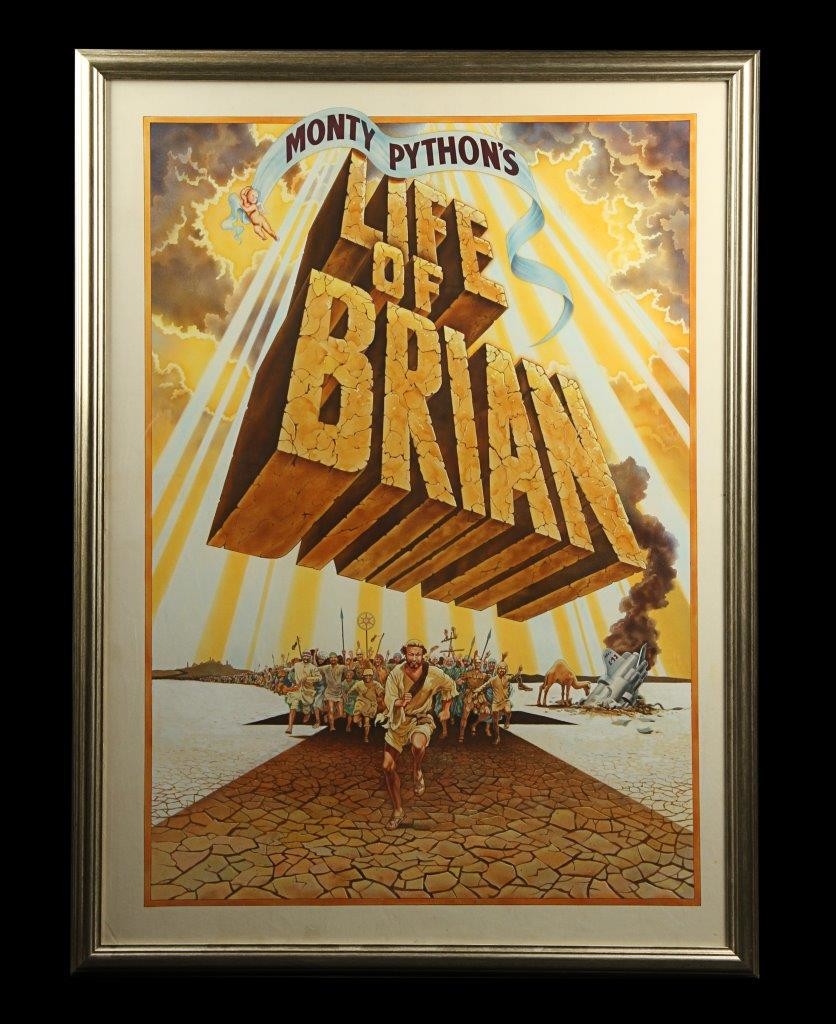 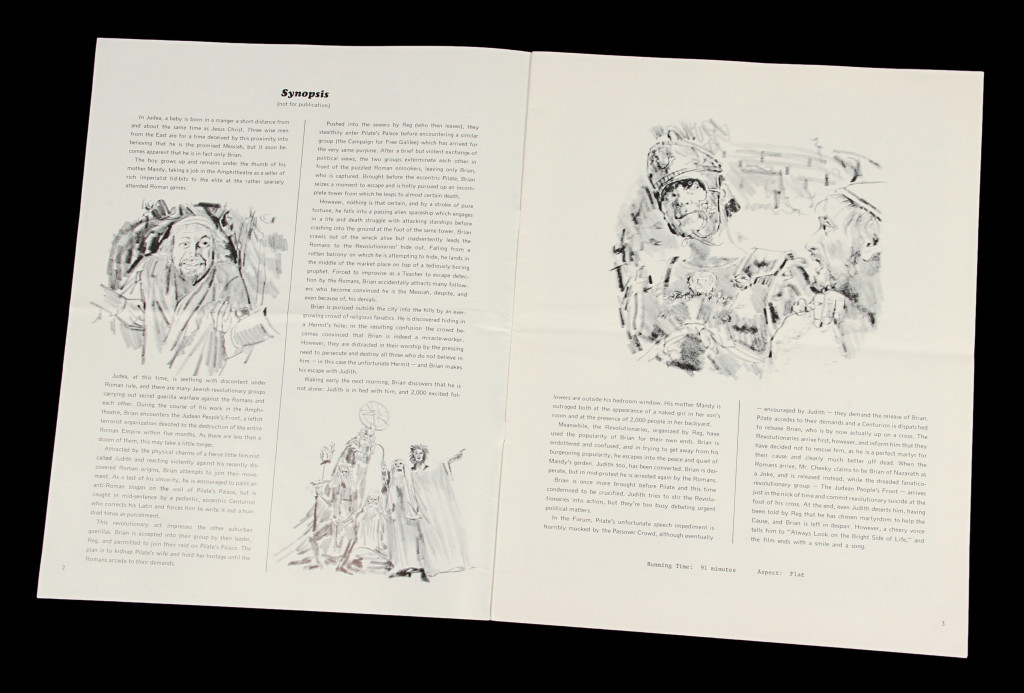 Hand-Painted US One Sheet Poster Artwork, MONTY PYTHON’S THE LIFE OF BRIAN (1979)

This imposing piece of hand-painted artwork was created by an unknown artist in gouache, ink and pencil on illustration board. It depicts Brian (played by Graham Chapman) running away from his followers alongside a crashed UFO, and was used to create the style ‘A’ film poster for distribution in the US. The artwork is presented in a gold-painted frame, and will be sold accompanied by a US one sheet poster and a press book (which would have been distributed by producers to publicise the film).

This unbelievable pieces of Monty Python history will be available in the upcoming Prop Store Entertainment Memorabilia Live Auction, so Register Now to make sure you are kept up to date will all the latest auction information and more! And don’t forget to check back at the Prop Store Blog every Monday and Friday leading up to the Live Auction to get more exclusive sneak peeks of what’s to come in one of Europe’s largest and most exciting film and TV memorabilia auctions.