Film posters have long been a visual staple of the modern world. From the cinema walls, to adverts on your phone screen, film posters and their artwork have long since been utilised as a way to promote upcoming movie titles with the use of bold colours and the faces of famous actors…

The first known film poster was used back in 1895 to promote the L’Arroseur Arrose – a French silent black and white comedy film by one of the first film-making duos, the Lumiere Brothers. The poster itself was based on an illustration by Marcellin Auzolle, and this style of printing promotional film artwork through lithography became the foundation for what is now the classic film poster. 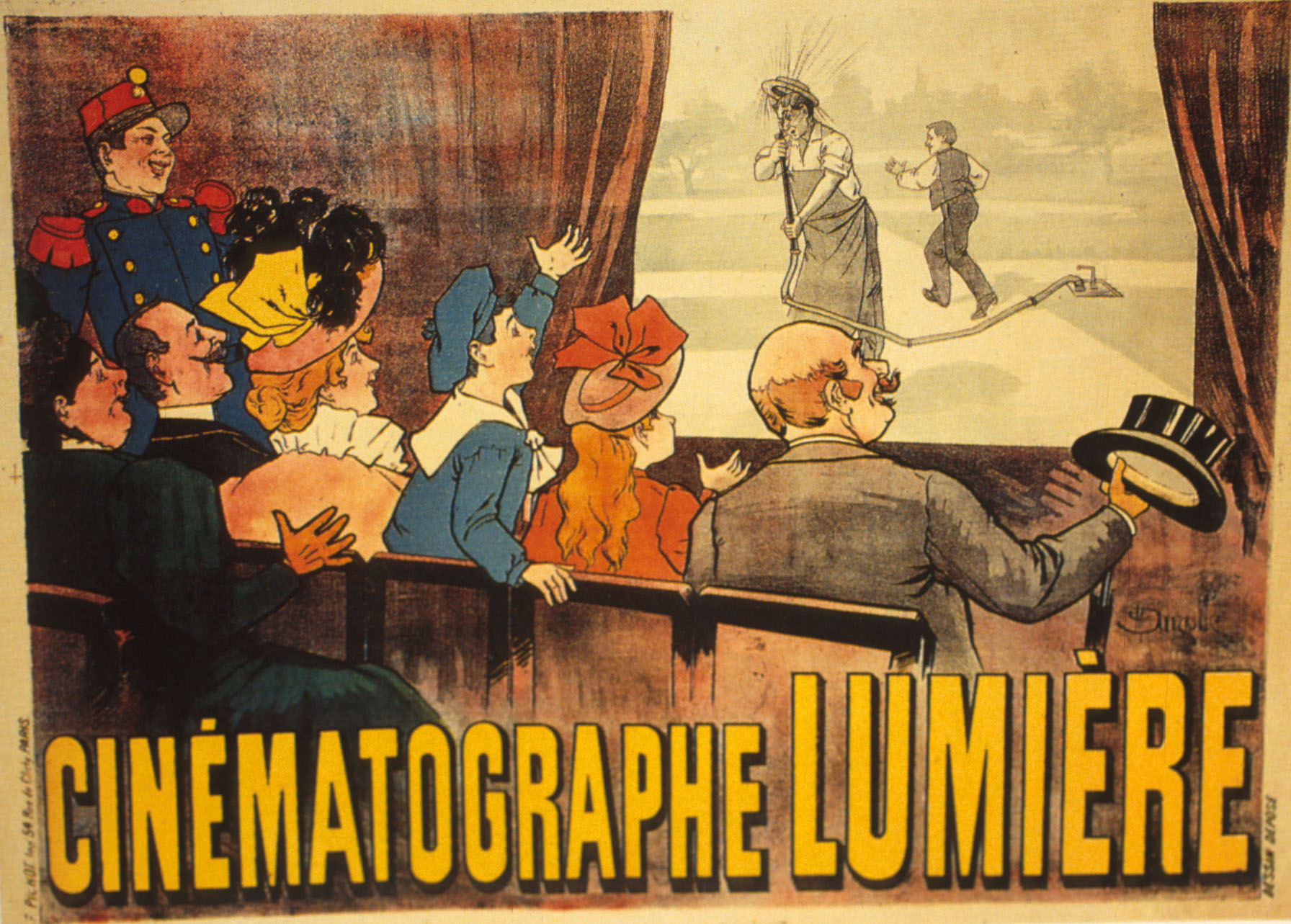 Prior to this, posters and other printed advertisements had been printed using a simple metal or wood engraving process which allowed little room for colour or creative design. However, in 1880 (82 years after the initial introduction of lithographic printing) a French painter called Jules Chéret, introduced a new lithographic process, which enabled a far greater range of colours, texture and creativity on the printed page. Chéret’s updated processes to lithography, which had previously been seen to be too time consuming and expensive, ushered in the modern age of printed advertising, naming Chéret as the father of the modern poster. 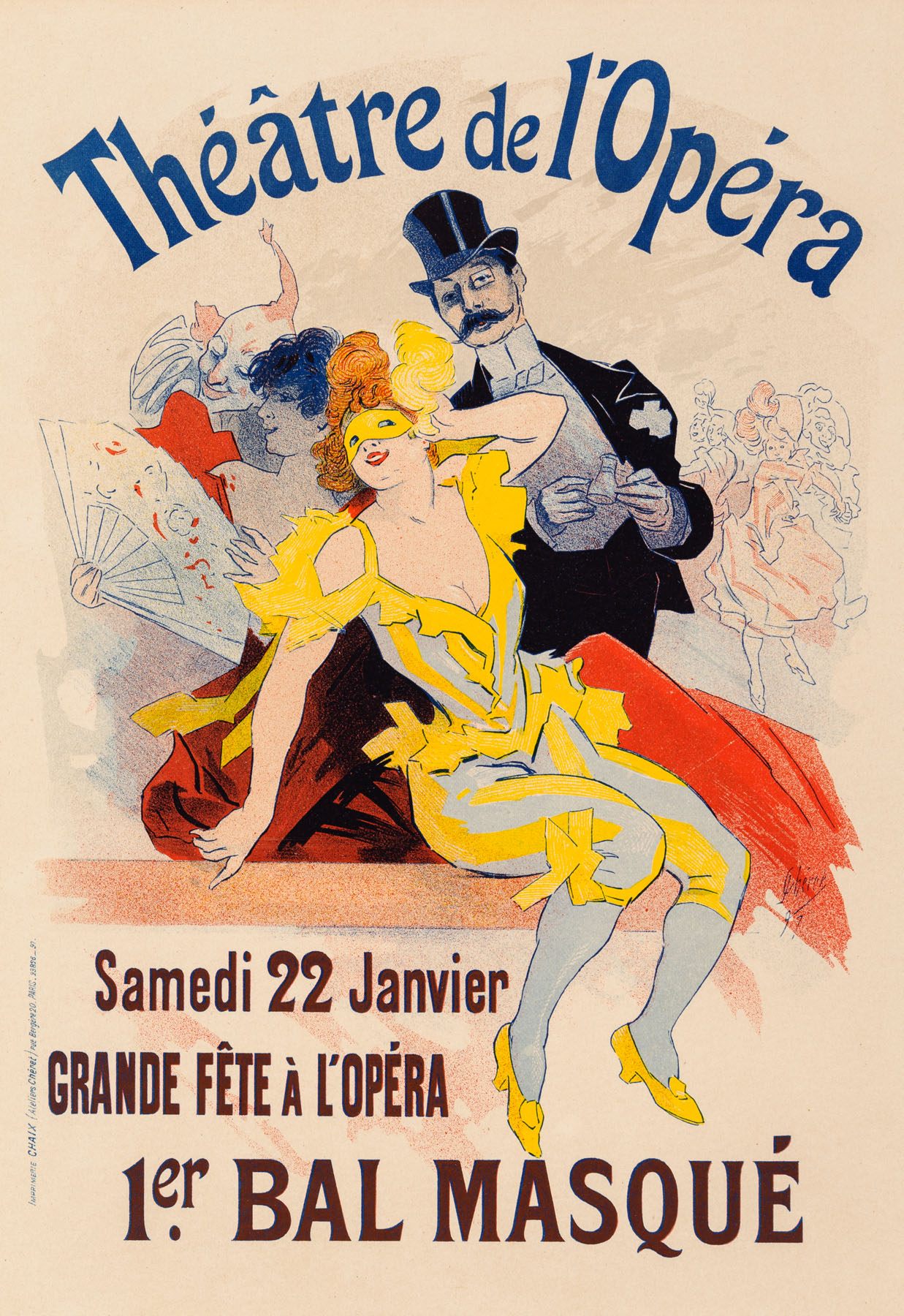 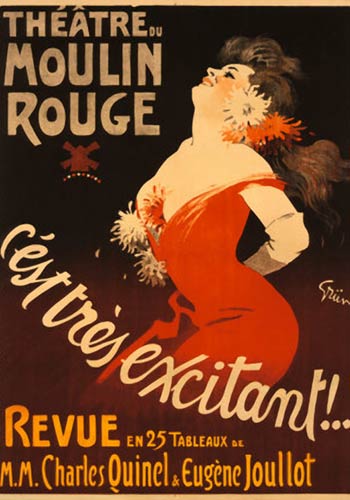 Post-World War II, the golden age of Hollywood had already ended and the introduction of the television had created what seemed like the beginning of the end for the film industry. The in-house poster studios that had once thrived with their brightly coloured lithograph prints in the ‘20s and ‘30s, were now systematically being closed as the need for cinema and expensive advertising came to an all time low. With this need for advertisement being shipped off to independent companies, a new kind of movie poster started to appear.

This new era of designers were no longer under the watchful eyes of production company rules and regulations and an explosion of new art styles began appearing, with the modernist movement in poster design coming to the forefront. Additionally, this new wave of creativity and design introduced a new poster style in the 1950s – the photo-montage. This new design soon rose in popularity and began to slowly replace the traditional hand-painted pieces, which were more expensive and time-consuming to produce. Interestingly, this is still the accepted industry standard that we see today! 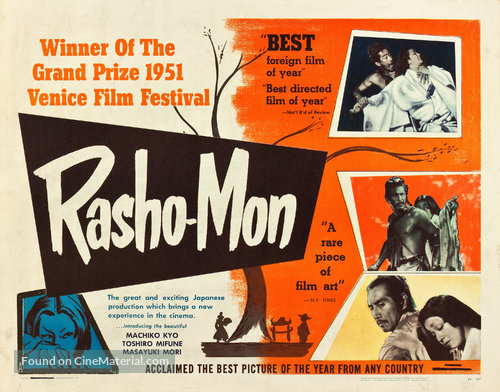 Nowadays, film posters are no longer the centre of film promotion. However, the appreciation for the mastery of old cinema has once again come back in fashion, and with it, the resurgence for the more traditional painted-style film poster. Although the majority of design work is now done digitally, artists can still be seen to reference the hand-painted designs from the golden age of cinema. 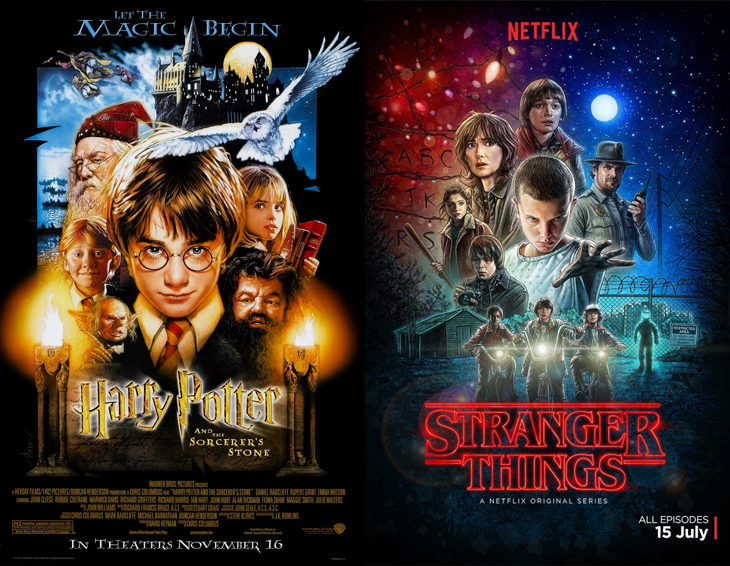 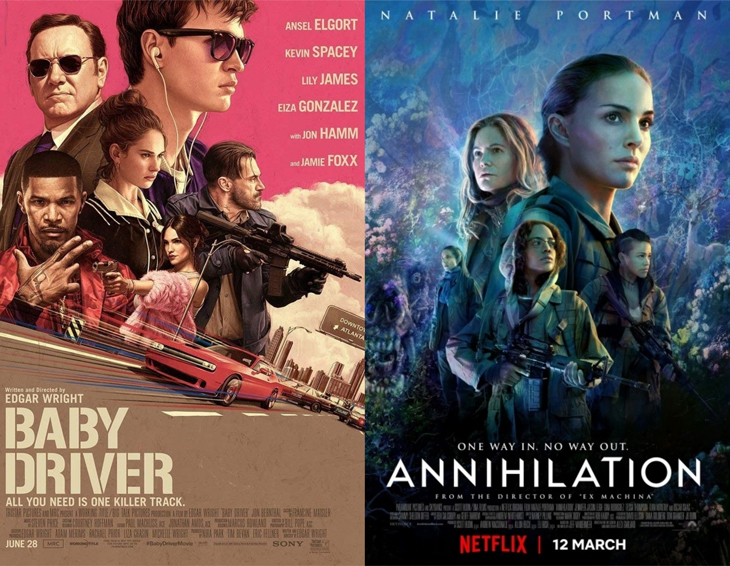 The current Propstore Cinema Poster Auction (20th Nov) contains over 400 very collectable and valuable movie posters, but we are also lucky enough to have an amazing collection of surviving original painted artwork too. 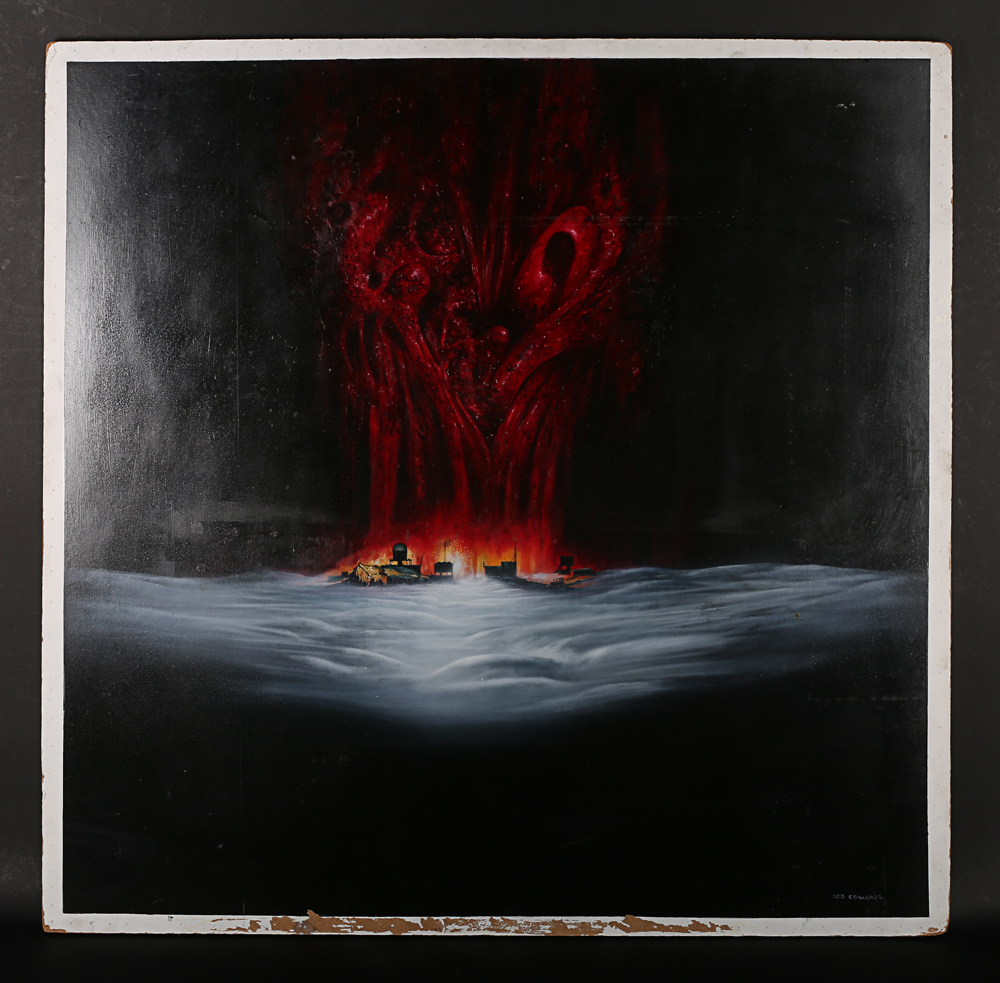 The star artwork piece of the auction is the awesome painting for the UK Quad poster for John Carpenter’s The Thing (1982). Firmly rooted in the world of fantasy-horror and sci-fi, artist Les Edwards was principally a book-jacket illustrator but occasionally undertook poster commissions too. ‘The Thing’ represents Edwards’ best known film poster. Edwards’ dramatic atmospheric piece  is spectacularly large (42″ x 43″) and was created this way so that the fine detail could be carried over into the smaller Quad poster size. Originally, the landscape was more rugged but the distributor drafted in fellow sci-fi illustrator Jim Burns to soften the final imagery. This painted Artwork for ‘The Thing’ is one of the rarest pieces of finished Quad poster illustration known to exist. 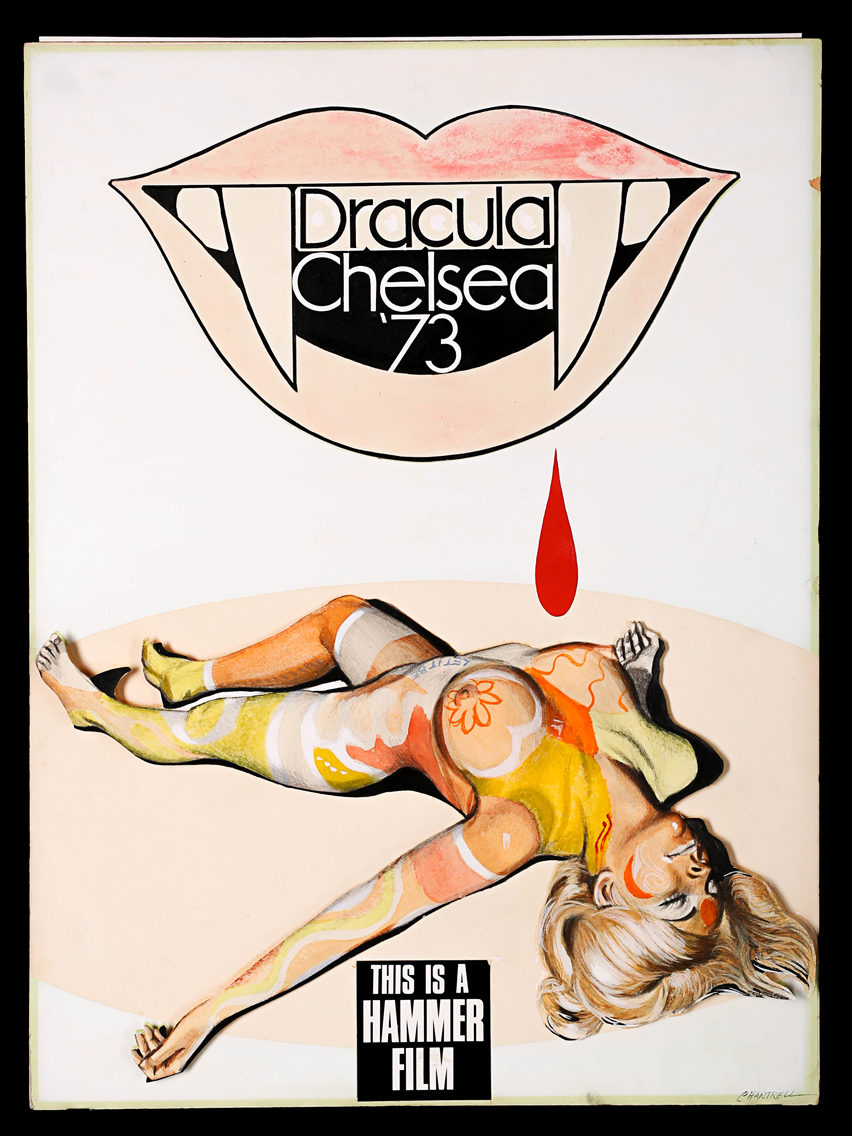 Continuing the Horror theme is a piece of pre-production artwork for Hammer’s Dracula A.D. 1972 (1972) by Tom Chantrell. Interestingly, this was also the final Tom Chantrell Artwork for a marketing flyer commissioned by Hammer Studios. This artwork was produced for pre-production flyers that were used to promote Hammer’s forthcoming film preliminary entitled Dracula Chelsea ’73 (and eventually re-title at released as Dracula A.D. 1972). The painted Artwork depicts a nude psychedelic-coloured woman reclining in the centre with the film title encapsulated in Dracula’s mouth (with the customary “THIS IS A HAMMER FILM” text is to the bottom rim). The piece itself is a very attractive and rare piece of original Chantrell/Hammer artwork. 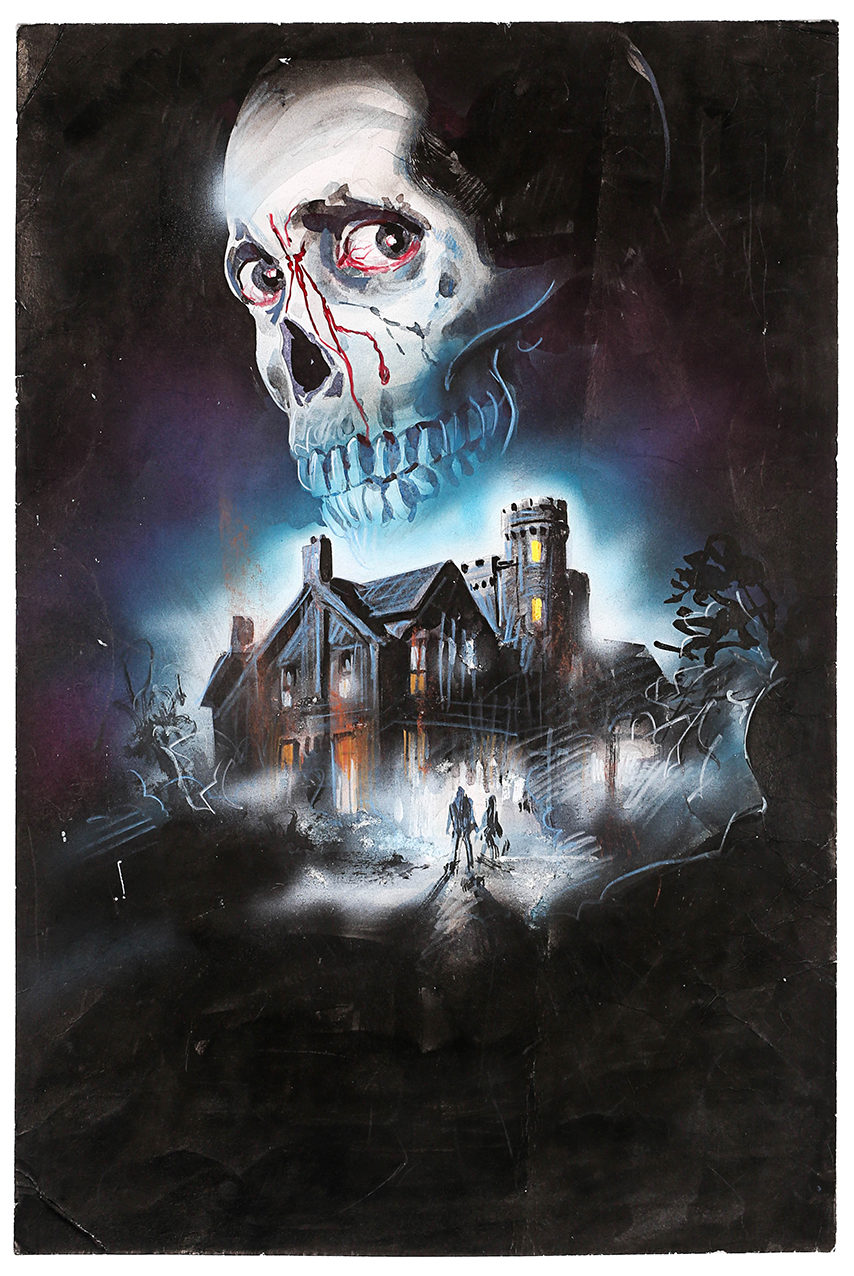 Another great lot in the auction is a fabulous back-to-back concept artwork for the Italian poster versions of Sam Raimi’s zombie horror, Evil Dead 2 (1987) by Enzo Sciotti. The painted design resembles the finished printed Italian poster featuring both the blood seeping skull and the ghostly country retreat. Equally interesting, however, is that on the reverse of the painted prototype is a further concept artwork. Although executed in pencil rather than paint, the second pencil illustration shows a progression with the number “2” superimposed over the key elements, this matching the finished poster. Additionally, the artist has signed the pencil Artwork in pen to the bottom right. Although well-known as a horror genre artist (Evil Dead, Creepers, The House By The Cemetary etc), Sciotti has been responsible for a variety of other Italian/French/Spanish poster designs too (Midnight Cowboy, Blue Velvet, Being There, Pumping Iron etc). 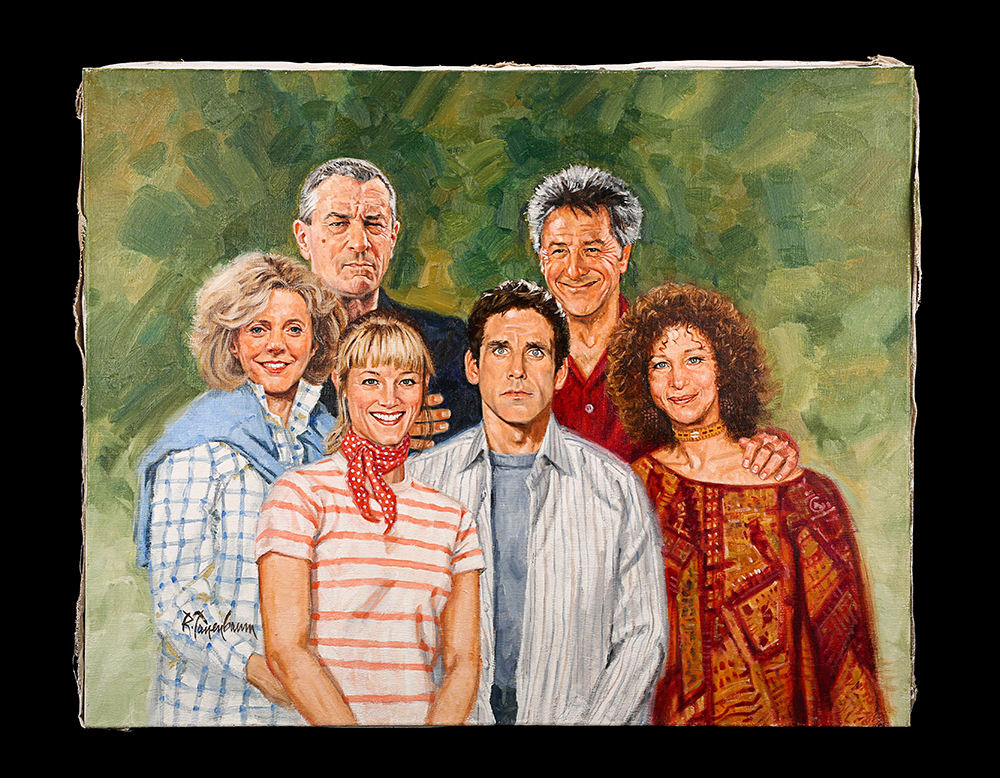 And for those who prefer their entertainment more light-hearted, we have the hilarious concept artwork for the cult comedy film Meet The Fockers (2004). The distinguished movie poster artist Robert Tanenbaum was commissioned to create this artwork with the idea that it would be framed as a family portrait and be the key component in the final poster design. Tannenbaum is also believed to have been paid a fee of $25,000 for this commission.

Ultimately, the artwork was not used and the main US One-Sheet instead presented a small photograph of the key cast members. The UK Quad poster does feature a framed “family” portrait like the Tanenbaum illustration, but this is again photographic. Tanenbaum is one of America’s foremost movie poster artists with a long roster of iconic artwork to his name including Battlestar Galactica, Mission Galactica, Battle For The Planet Of The Apes, The Color Of Money, High Anxiety, Dirty Larry, Crazy Mary, Cujo and many more.

These are just a handful of around 30 pieces of original artwork that can be found among the array of posters, artwork and memorabilia in the Propstore Cinema Poster Live Auction, which ends on the 20th November 2018. So if you’re looking for that ultimate collectable piece or just something amazing from a film you love to collect, check out the full catalogue now…