Throughout Star Trek’s 50 years of existence, the Klingons have remained one of the most dangerous and problematic species in Starfleet’s orbit. Naturally, the Klingons return in the new films and remain in brutal opposition to the Starfleet mission… 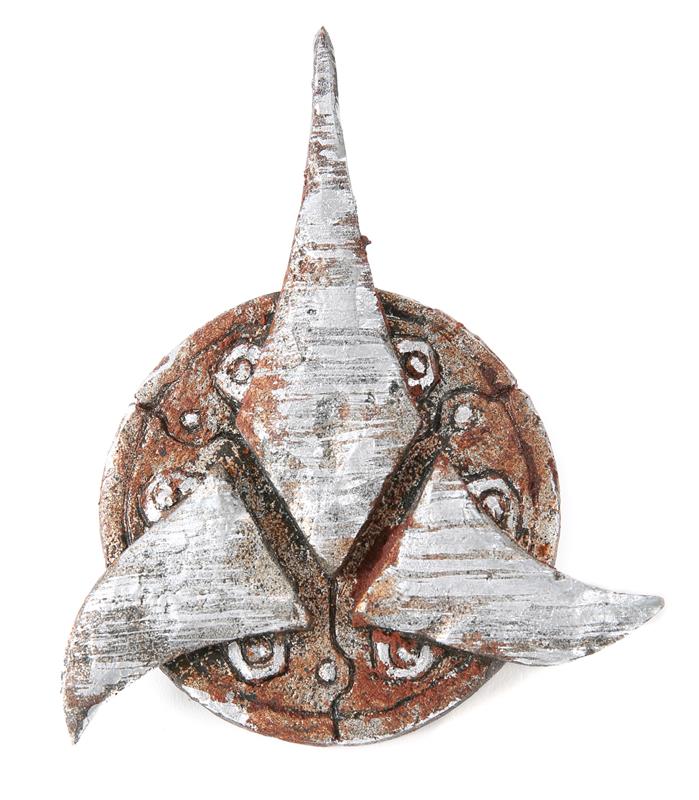 Just as with the classic Starfleet insignia, the Star Trek Into Darkness designers knew that they could not change a classic. This instantly recognizable piece of Star Trek symbology represents the Empire that served as Starfleet’s greatest threat to peace for hundreds of years. Made to look weathered from the rough lifestyle of the Klingons, this piece is produced from urethane and is made to be proudly displayed on the chest of all Klingons who value strength, duty, and sacrifice. 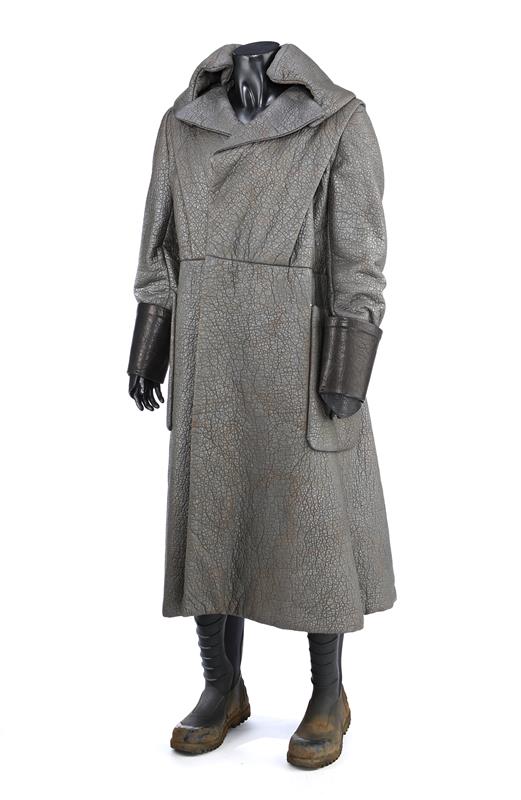 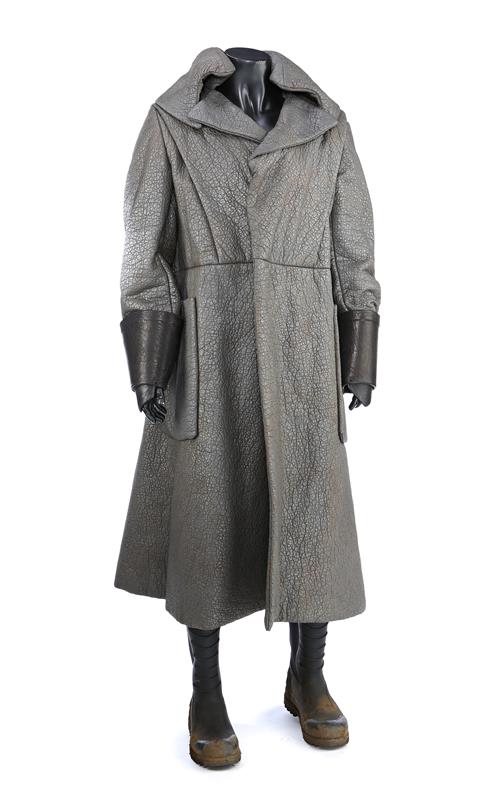 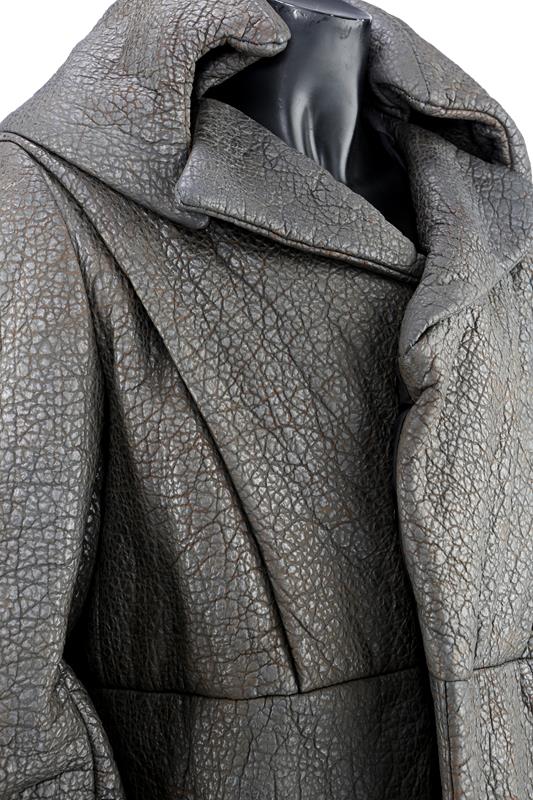 The Klingon greatcoat uniform was originally designed by Michael Kaplan for use in Star Trek (2009), which saw coated Klingons on Rura Penthe, a Klingon prison planet where Nero and his crew were held after being captured. Though this scene was ultimately cut from the film, many elements were reused when the Star Trek Into Darkness script called for a small Klingon army. The aesthetic of this coat is extravagant while keeping with the rugged style of the Klingons. Made from a material that resembled the skin of an alien species, the coat features a prominent collar which rests high on the shoulders of the wearer. A pair of leather wristguards and dirtied boots completes the penal colony look of this outfit. 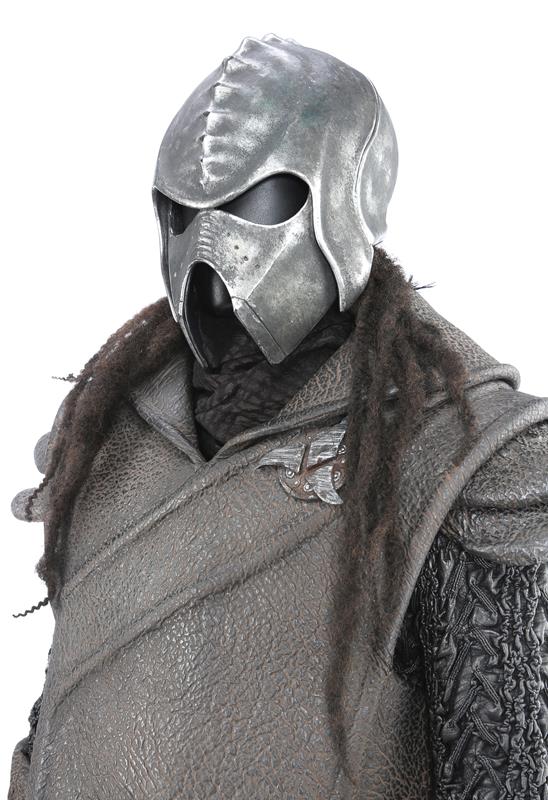 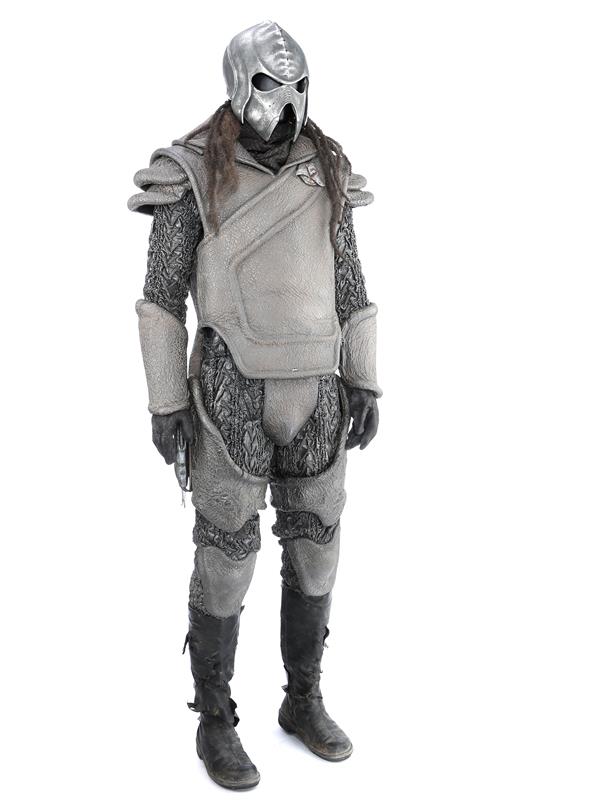 A culture that embraces conflict deserves a look that matches its aggressive tendencies. The armor in this costume is made to look as though it is produced from the hide of an alien species. The shirt and pants are made from equally strange material and are worn beneath the armor. Additionally, this costume features a helmet which is made from dense urethane and is painted to appear as though it is hammered metal. This helmet’s aesthetic fits perfectly into the Klingon world and features a design similar to the famous ridged forehead of the warrior race.

This outfit is paired with a Klingon disruptor which is stored in a holster on the hip. Additionally, A full-length disruptor is also included with this lot and shares a similar design to its smaller counterpart.

Though the Klingons are known to prefer hand-to-hand combat while wielding their bat’leth, the species also employs firearms in their repertoire of fighting tactics. A complete redesign of disruptors seen in previous Star Trek television series and films, this piece features a utilitarian design with hard angles and a diagonal grip. Though made to fire from a distance, this weapon still exhibits the Klingon love for brutal combat as the weapon features designs for melee attacks on both the grip and barrel. Unlike Starfleet weapons, this Klingon disruptor has no stun setting.

Made from urethane over an aluminum substructure, this piece is painted to appear as though it is made from metal. Notably, this SFX prop features a small green window which houses small green LED lights, allowing the prop to look ready-to-fire at the press of a button.

Share
Related Articles
24.11.2017  |  Auctions ,  Star Trek
Star Trek Live Auction… The Final Frontier: Uniforms and Props From the USS Enterprise
Debuting in 1966, Star Trek unleashed a pop-culture phenomenon that would permanently keep a residence in the consciousness and hearts of science fiction fans. With Star Trek’s popularity, Starfleet’s Captain William T. Kirk, Lieutenant Nyota Uhura, Dr. Leonard ‘Bones’ McCoy, and the ever-so-logical Mr. Spock quickly catapulted from television series characters to beloved icons.
26.08.2016  |  Auctions
Propstore Live Auction 2016 Presents… Star Trek
Welcome to this week’s preview to our Propstore Live Auction on 27th September 2016. will be focusing on one of the most beloved ‘space’ series – Star Trek…
16.11.2017  |  Auctions ,  Star Trek
Star Trek Live Auction… Andy Siegel: Starfleet’s Prop Master
Working as the Prop Master for a major motion picture is a tough job, even when the pieces you’re creating aren’t already iconic. When industry veteran Andy Siegel landed the job for Star Trek Into Darkness, he was not only taking on a sequel to a successful film, but a legacy of props and design […]
12.11.2018  |  Auctions
Boldly Going: Highlights from the TV Treasures Auction
Outer space was on the forefront of culture in the 1960s. When President John F. Kennedy set out his plans for the New Frontier, he rekindled a lost pioneer spirit and set our sights – and imaginations- on the stars. Armstrong and Aldrin first explored the moon in 1969, and a short 300 years later, […]
Sign up to be in the know