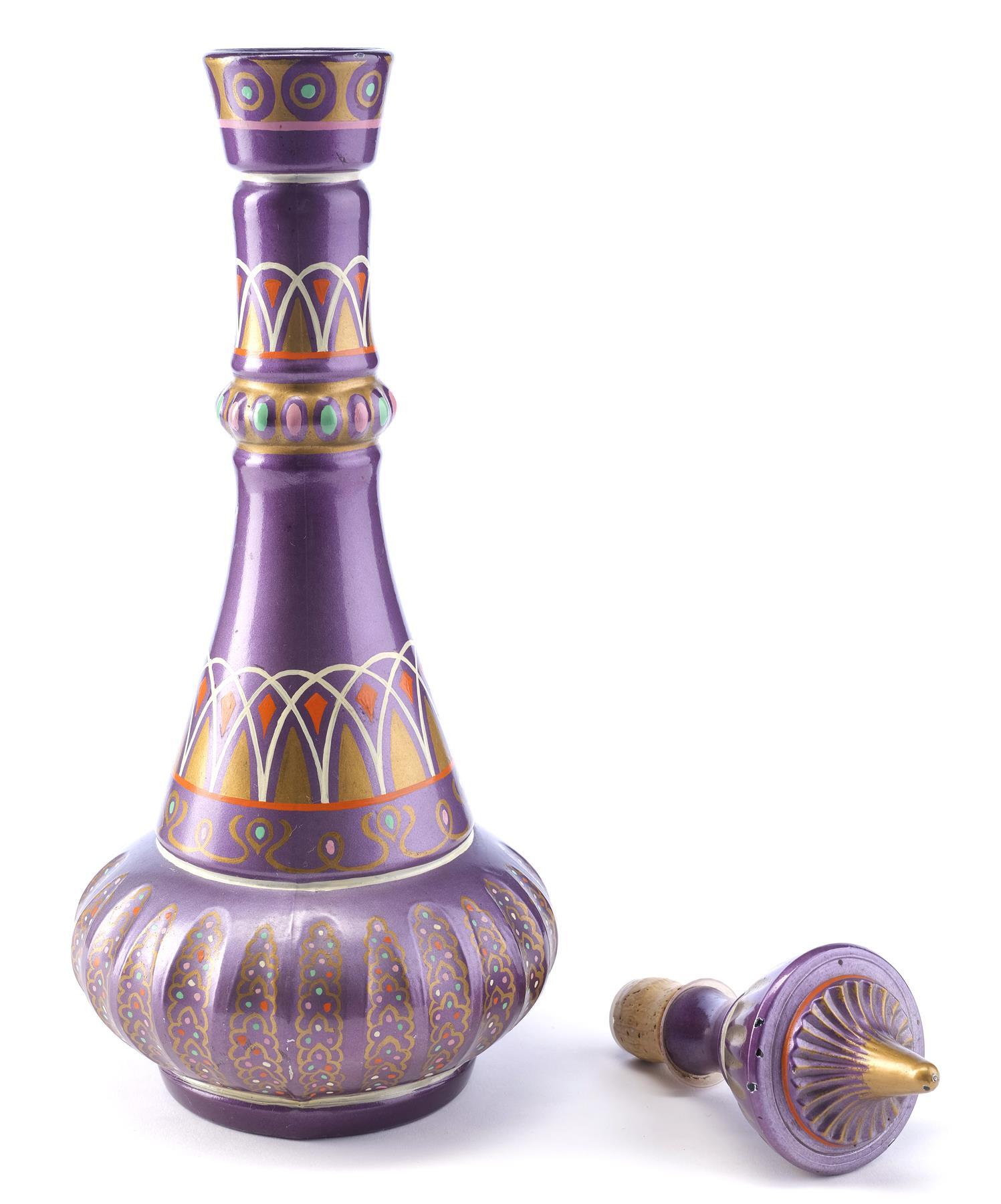 The ’60s were a time of social upheaval and sexual revolution. While beloved sitcom I Dream of Jeannie is not quite a feminist clarion call, it did represent a new world where major TV shows could have a female central protagonist. The show also aired during a televisual revolution, switching from black-and-white to color for its second season. This striking piece of glassware well represents that epochal moment. While Jeannie’s season one abode, originally a Jim Beam’s Choice bourbon bottle, was only sparsely painted with a simple leaf pattern, the move to color gave the prop a vivid, eye-catching upgrade. Bright and psychedelic, you could almost say the new version is the ’60s… bottled! 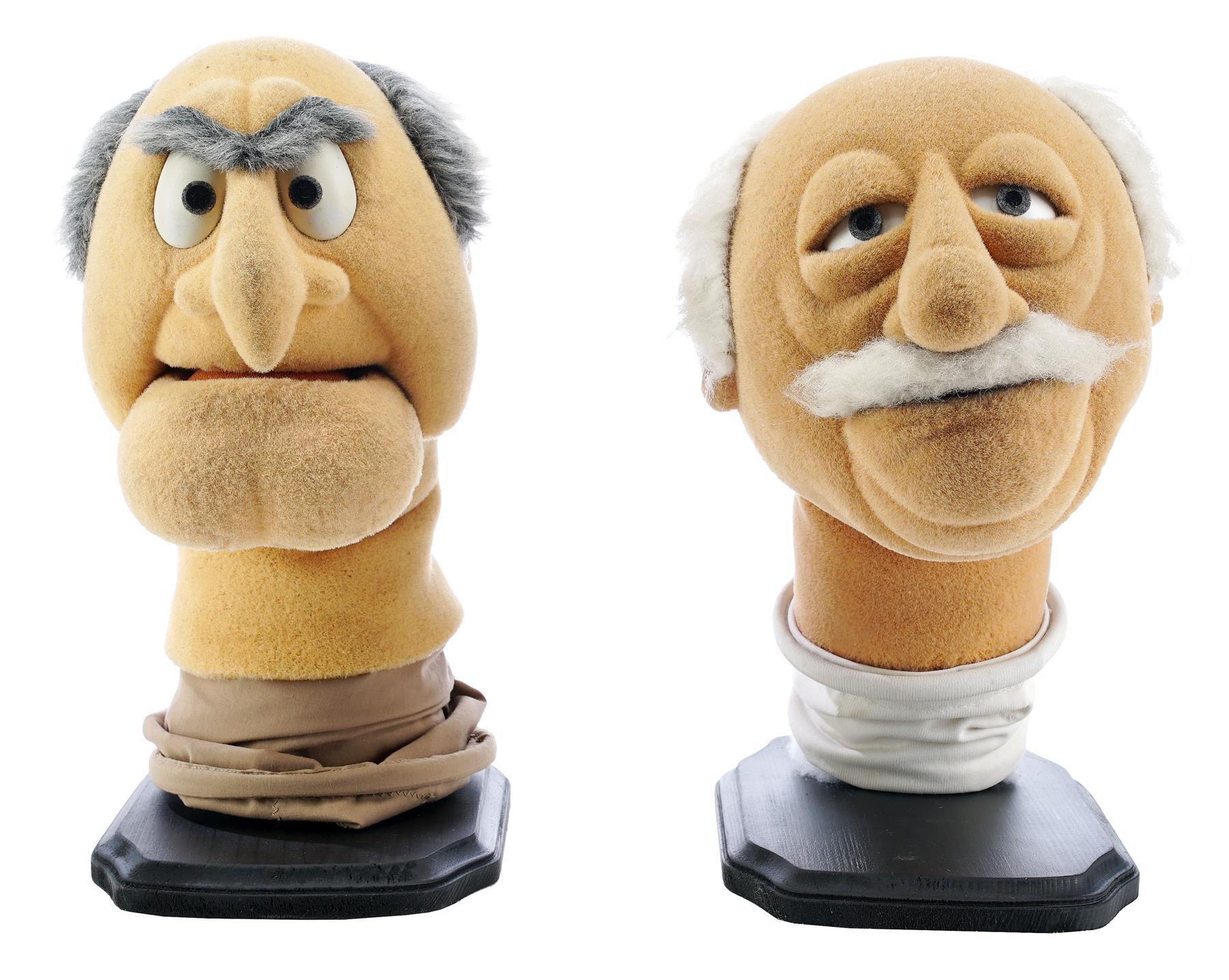 The decade of Nixon, Watergate, and the fallout of the Vietnam War was cinematically characterized by gritty, edgy dramas which brought escapism down to earth and rolled around in the dirt. But, while the world grappled with its conscience and the corruption of its leaders, a small band of puppeteers hit the airwaves and made the viewing public believe in the kindness behind their Antron felt creations. As Kermit the Frog led the misfit troupe’s antics on stage, lifelong critics Statler and Waldorf hurled heckles at them all from their theater box. A testament to these eternal curmudgeons’ longevity, this pair of original Muppet heads were constructed by Ha! Henson Associates in 1998. 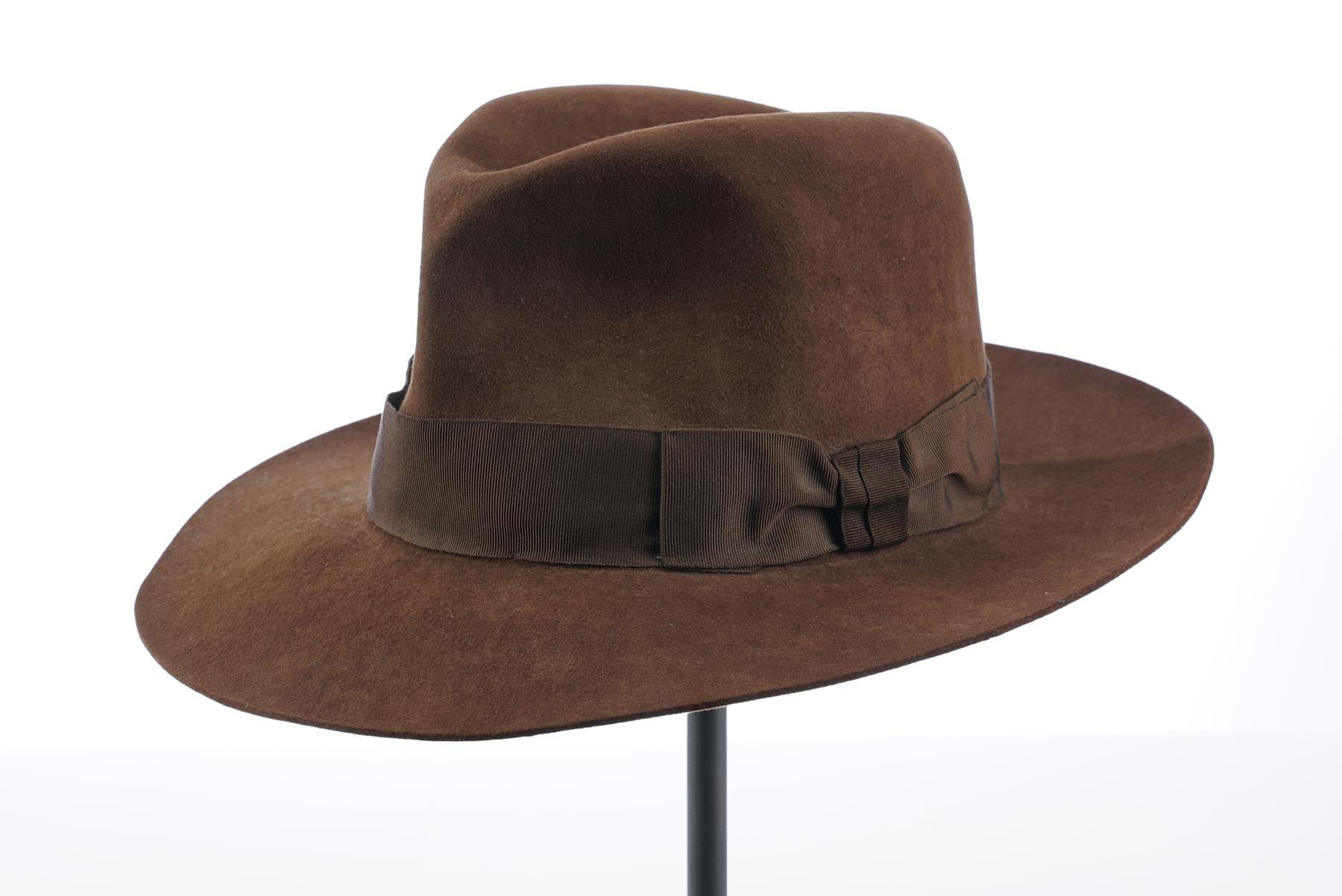 As the Star Wars trilogy went to hyperspace and “movie brats” George Lucas and Steven Spielberg brought eye-popping, jaw-dropping flights of fantasy to our screens, the ’80s became defined by a new brand of visual-effects-driven action. And if a single item could represent the decade’s sense of big-budget adventure and new-school derring-do, what is more appropriate than a certain brown rabbit-felt fedora?

Sure, Indiana Jones was a heartfelt throwback to the adventure serials and pulp magazines of the ’30s, but Spielberg’s modern vision and Lucas’ groundbreaking effects house ILM reinvented the genre through Raiders of the Lost Ark and its sequels. And with such style, too: every iconic hero should be recognizable by their silhouette, and thanks to his hat (one which he can never leave behind), Indy will forever be recognized worldwide, in an instant
. 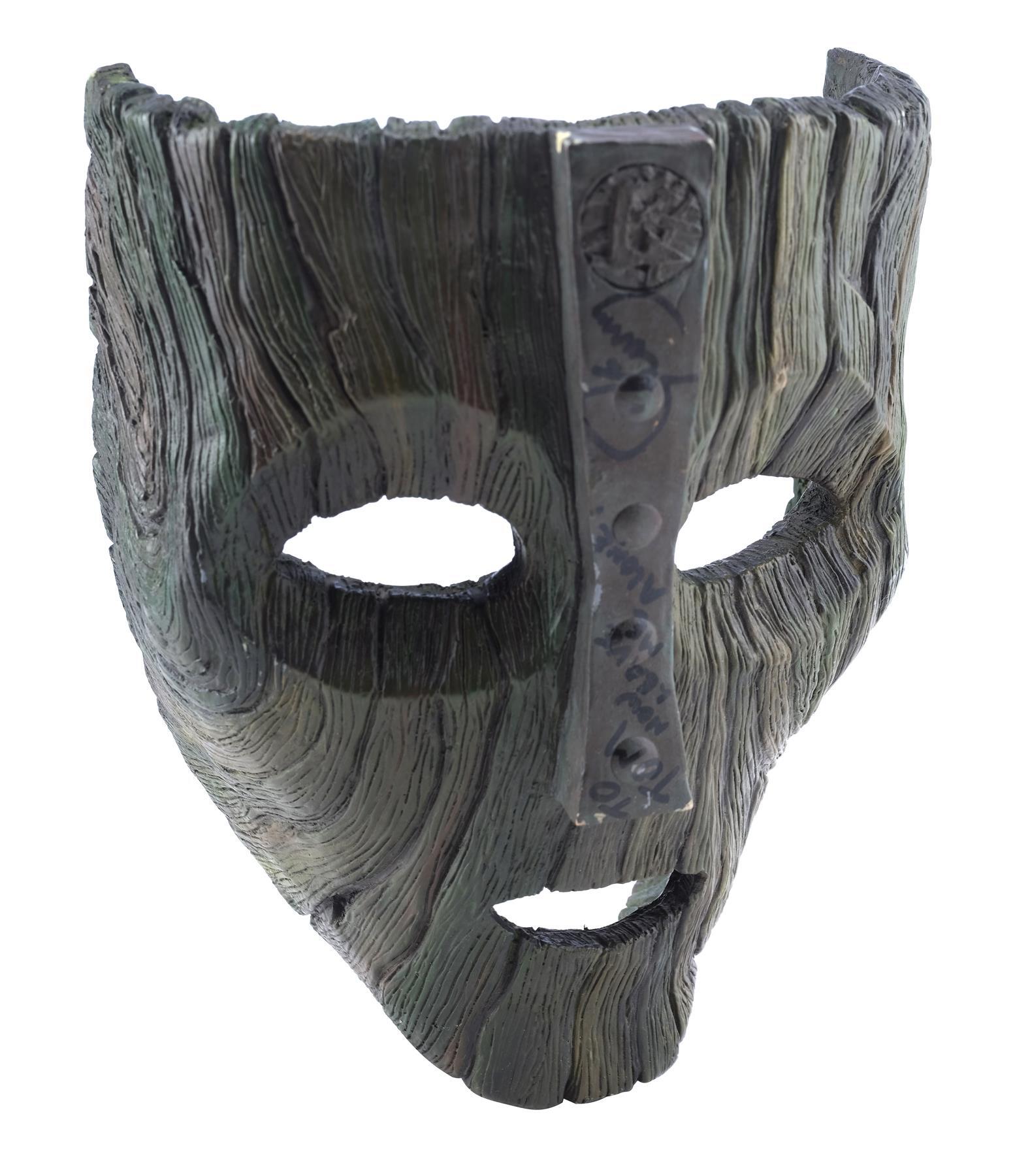 As the 1990s dawned, summer blockbusters became as spectacular as they were commonplace, with the stumbling rise of superhero action romps and actors with more star power and personality than their films to contain. Enter: Jim Carrey. Carrey’s star rose from relative obscurity to worldwide sensation in 1994 with the release of Ace Venture: Pet Detective, Dumb and Dumber, and The Mask.

An adaptation of the Dark Horse comic of the same name, The Mask earned an incredible $351 million at the box office, placing it at the time as the second-most profitable comic book film of all time, behind Superman (1978). And while the star’s green, grinning face brought people to the theaters, it was the wooden Mask of Loki that gave Carrey’s Stanley Ipkiss his cartoonish trickster powers.

Imbuing this piece with even more personality is Carrey’s inscription along the ridge to the film’s prop master, “To Tom, now leave me alone.” 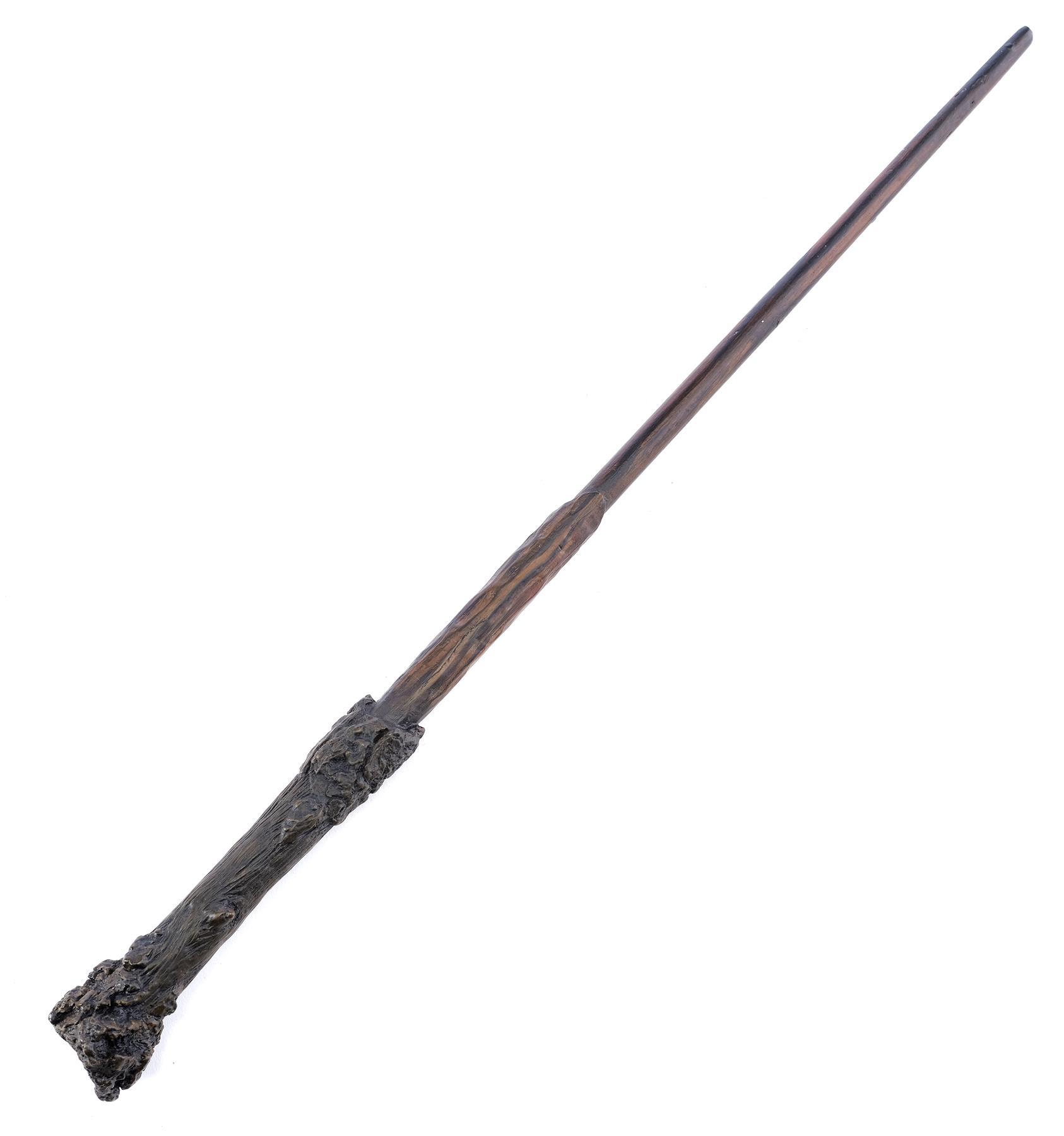 Much as the wand chooses the wizard, the era chooses its hero. Arriving in 2010, the hugely ambitious, and successful, films of J.K. Rowling’s seventh Harry Potter novel transported us away from normalcy to the magical, often sinister, world of witchcraft and wizardry.
All the magic of that journey is symbolized by the instrument of Harry’s power: his wand. This example is from the young wizard’s penultimate appearance at the close of the decade, though he used the same style of wand since his third year at Hogwarts. This auction lot and Harry’s glasses represent the first time these particular props have ever been offered at auction by the Warner Bros. Archive. 100% of the Hammer Price proceeds from these sales will benefit Lumos, an international charity founded by J.K. Rowling and dedicated to fighting for every child’s right to a loving family. Learn more about Lumos HERE.
. 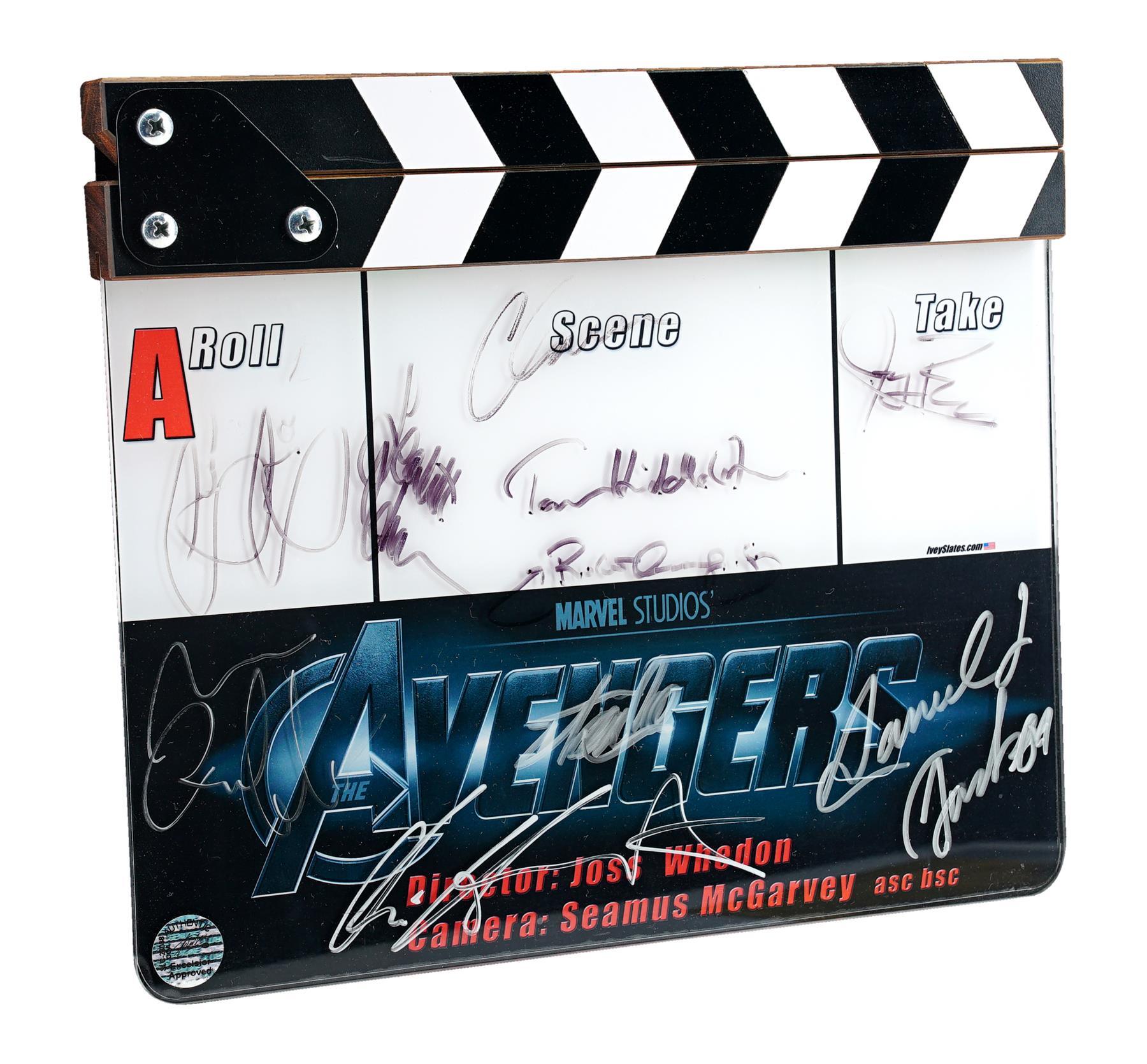 The 2010s
Framed Cast-Autographed Clapperboard, from The Avengers (2012)

The past ten years of Hollywood filmmaking have been dominated by one name above a fury of competitors: Marvel. Starting in 2008 with the introduction of Robert Downey Jr.’s Iron Man, four years of standalone superhero stories led to an unprecedented silver screen crossover in The Avengers. Collected on this “gift slate” clapperboard are autographs from the entire SHIELD team, including Robert Downey Jr., Chris Evans, Chris Hemsworth, Scarlett Johansson, Mark Ruffalo, Jeremy Renner, Samuel L. Jackson, Tom Hiddleston, Stellan Skarsgard, and the creator of many of the film’s characters, Stan Lee. Consider these Avengers assembled.
.

Share
Related Articles
13.05.2016  |  Collections
Celebrate Miniatures and Puppets with Propstore!
Long before digital technology took on the lion’s share of effects work, miniatures and models ruled the roost. Some teams are still working with them, so we thought we’d take a look at some vehicles and other creations from both the past and present of movies
24.07.2020  |  Collections ,  Live Auction- Los Angeles 2020
NOSTROMO: A Legend Born, And Born Again l Entertainment Memorabilia Live Auction – Los Angeles 2020
The cover piece for our first ever Los Angeles-based Entertainment Memorabilia Live Auction is the 11-foot long filming miniature of the Nostromo from Ridley Scott’s horror classic, Alien. This artifact has been a part of Propstore’s company collection for over a decade, but wasn’t always in the camera-ready shape you see it in now. Read […]
10.11.2016  |  Auctions
Propstore Presents… Everything You Wanted To Know About Bidding in The Twilight Saga Auction But Were Too Afraid To Ask!
Just as The Twilight Saga Auction is the first time props and costumes from the Twilight films will be auctioned off, it is also the first live auction many Twilight fans have taken part in a Propstore Live Auction. So, in addition to our full Buyer’s Guide and Terms & Conditions, here is a […]
04.11.2020  |  Auctions
Live Auction Bidder’s Guide – Cinema Poster Live Auction
Is this your first Propstore poster auction, or just your first in a while? Then don’t worry, because we’ve got you covered! In addition to our full Buyer’s Guide and Terms & Conditions, here is a handy reference guide to the various ways that you can participate in the Cinema Poster Live Auction!
Sign up to be in the know