Those in the hobby use the term “screen-matched” to describe when a piece of memorabilia—a prop or a costume from a particular film—can be clearly identified in the finished film. This is usually done using specific, impossible-to-replicate tells, such as the wood-grain on a pistol grip or the sweat stains on a certain whip-slinging adventurer’s fedora. To a collector, nothing is quite as sublime as being able to visually match a prop or costume in a favorite film to the one in his or her collection.

Screen-matching is often difficult and always rare. While it’s the ultimate proof of authenticity—better than any letter, certificate or rental agreement—a prop or costume that cannot be screen-matched does not necessarily detract from its value. Perhaps the piece was on screen but never close enough to the camera for identification, or maybe there were simply not enough distinct tells on the piece. There are always other ways to authenticate a piece. But the fact remains that nothing is better for a prop or costume’s value—both real and perceived—than a screen-match.

The advent of high-definition entertainment has resulted in a new wave of screen-matches. Details previously lost in the translation from high-resolution film to low-resolution DVD have been reawakened as Hollywood makes the transition from a standard of 480 lines of resolution to a whopping 1080 lines on Blu-Ray and slightly less in high-definition TV broadcasts. Pieces that were never matched before are suddenly skyrocketing in value as collectors everywhere scramble to their high-definition TVs and Blu-Ray players in an attempt to unearth truths previously hidden from home video.

But there’s one constant in Hollywood. And that’s that nothing is constant.

The same digital age that gave collectors high-definition has delivered a new hurdle to screen-matching:

post-production digital enhancement. Jonathan Mostow’s 2009 film SURROGATES serves as a prime case study for how things have changed (and will continue to do so) for collectors seeking that coveted “screen-match.”

This eerily “human” robotic surrogate is the only one built by Greg Nicotero and Howard Berger’s famous effects house, KNB EFX for the film. The one-of-a-kind piece is constructed from a dense foam underbody with a silicone skin. The eyes are prosthetic-grade glass inserts, the teeth are dental acrylic and the hair is hand-punched. Up close and personal, one momentarily wonders whether these were made to actually stand in as surrogates for the living. So much fine detail exists on this prop that any on-screen close up should lend itself to a fairly trivial screen-match.

The SURROGATES robot props were enhanced via computer-generated visual effects during postproduction on the film. As the technology of “movie magic” improves, the line between physical and virtual will continue to blur. In the case of SURROGATES, the robots like the one pictured were constructed as physical platforms that would be fully brought to life via computer-generated visual effects. Instead of an all-CG or all-practical approach, Mostow blended the two techniques to create a tactile realism in the finished shot. That means the viewer doesn’t know what is real and what is the aforementioned “movie magic.” And if you, the guy or gal in the audience, can’t tell what’s real and what’s not, then those movie magicians have done their job.

This compositing is illustrated particularly well in a comparison of the original prop built by KNB EFX (pictured at the top), the theatrical trailer (middle) and the finished film (bottom). 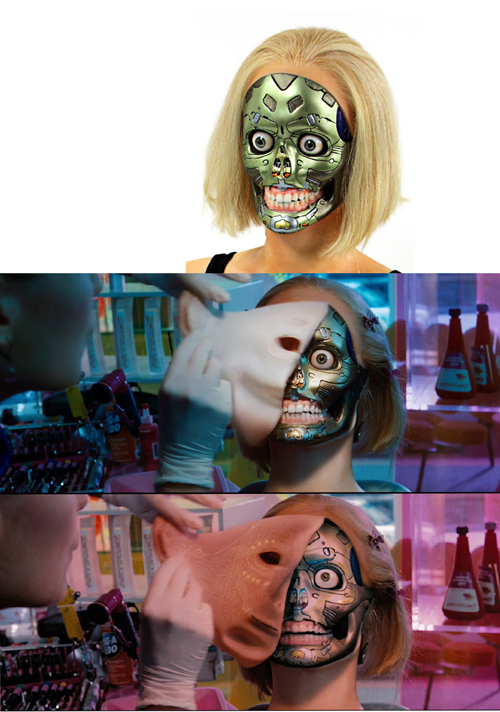 The first image is of the physical asset as presented to the production for filming, and as it still appears today—no camera trickery or digital enhancement involved.

The second image shows the theatrical trailer, where the prop was dressed up for filming but still shows little or no evidence of digital enhancement because the visual effects for SURROGATES were not fully complete when the trailer was cut. Many details on this piece can be easily screen-matched to the photos of the piece as it appears today, on Prop Store’s display stand.

But the third image is where things get really interesting. For the final version of the film, subtle touches were added digitally when director Jonathan Mostow sought to apply more details than existed on the physical prop. The circuit board pattern printed on the interior of the facial appliance is entirely computer-generated. Other visual punch-ups were made to the cybernetic skull, creating the illusion of lights and functionality that did not exist in the physical realm. Here we can clearly see three different versions of a prop that was physically built only once for the film. The end result achieved by KNB EFX, the director and the visual effects team—one that is repeated successfully throughout the film—is a seamless integration of the virtual and the practical that provides layers of authenticity in the film.

So while an investigation of a film’s Blu-Ray release may lead a collector to think their prop or costume does not screen-match, further research could reveal that the piece does match, but was also digitally enhanced. This is wisdom that collectors must keep in mind and a reminder that screen-matching will never be an easy feat.

The takeaway for memorabilia collectors is somewhat of a double-edged sword. This “digital detailing” is becoming more common, which can be frustrating to collectors who want to screen-match their memorabilia, but the technique can also often explain slight (digital!) inconsistencies between what’s on screen and what’s in a collection. Although collectors will likely resist this evolution of the technology, they, too should ultimately be encouraged. In a reality of rapidly increasing computer-generated visual effects, it thankfully appears that hand-made, tangible props are here to stay. This means that a future of digital prop surrogates standing in for practical, collectible props remains a thing of science fiction.

At least for now.

The content of this article is the copyright of Prop Store. Photographs and text cannot be duplicated or quoted without the express consent of Prop Store management.

Next post
5 Of Our Favourite Costumes From The Dracula Auction