We know! You thought 2016’s The Twilight Saga Live Auction was your only shot at walking away with something original from the films. But now original props and costumes from The Twilight Saga are back on the auction block in a timed, online auction. And since we figured some bidders would have questions, here are the In’s and Out’s of bidding in The Twilight Saga Online Auction.

For anyone who took part as an online bidder in the live auction, you’ll know this game pretty well. Once you are a registered bidder, you can enter a bid at any time by simply typing your max bid into the bid box or using the bid button (circled in red).

You will be asked to confirm every bid you place on a separate window. 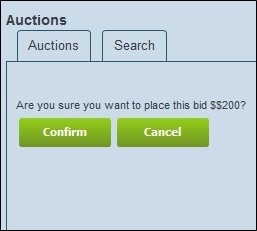 Once your bid is placed, the bid box will update and notify you if you are the high bidder. From there, you are able to increase your max bid if you like. 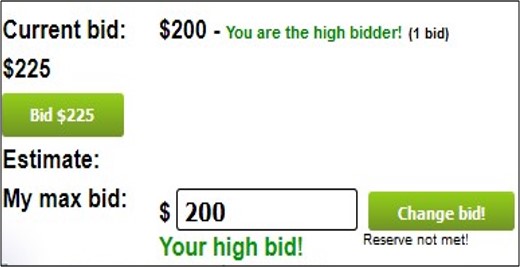 You can enter a max bid that exceeds the current asking price at any time. This is a good option for bidders who know they will be busy with other commitments when their lots close so they don’t have rearrange their day around the auction times. The process for this is the same as entering any other bid, just be sure to use the “My Max Bid” box to enter the appropriate amount.

In the photo above, a bidder has submitted a max bid of $8,000 on a lot that already had a bid of $700. The $8,000 max bid set the current bid to $800, asking $900. This is thanks to the auction’s increments, so any max bid placed is only affected when another bidder pushes the price higher.

In the photo above, a second bidder has places a $1,200 bid on the same lot and was automatically outbid by the previous bidder’s max bid. This pushed the current bid up by one increment to $1,300.

There is a small timer at the top of every lot page that shows, down to the second, how much time is left to bid on the item. 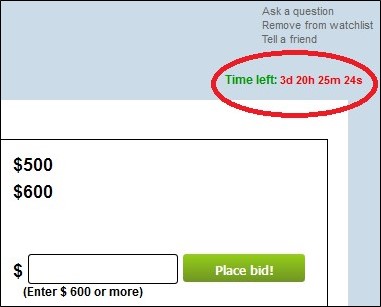 Unlike eBay or other similar platforms, a bid placed in the last minute of a lot’s time will automatically extend the lot’s sale time by 60 seconds. This function negates the ability for a bidder to “snipe” a sale at the very last minute and instead gives all bidders extra consideration time before the lot closes.

Though a fairly simple process, there is one thing to watch out for: if a bid is placed less than a minute before the lot is set to end, the lot timers can sometimes reach “0” before it refreshes and displays the true auction time remaining. This occurs when an Internet browser’s automatic refreshing period is not in line with the countdown clock, causing the clock to run out before it is told by the site host that there was another bid. For this reason, we recommend bidding early for lots you are hoping to win.

In short, the key thing to remember is that “0” seconds left does NOT mean the lot is sold.

Only “CLOSED” means that bidding for the lot has concluded.

Bid Early: The best way to avoid any confusion with the auction timer is to place your bids well before your lot’s final minute. Many bidders have already taken advantage of this option on the catalog page.

Use Max Bids: If you have your budget in mind for a particular lot, consider placing your max bid at your absolute cap any time before the auction closes. Then, come auction day, you can just relax and wait to see if you won.

Don’t forget to register soon for The Twilight Saga Online Auction and get your bids in before Friday, November 17th!