INTERVIEW WITH NILO RODIS-JAMERO, Part I 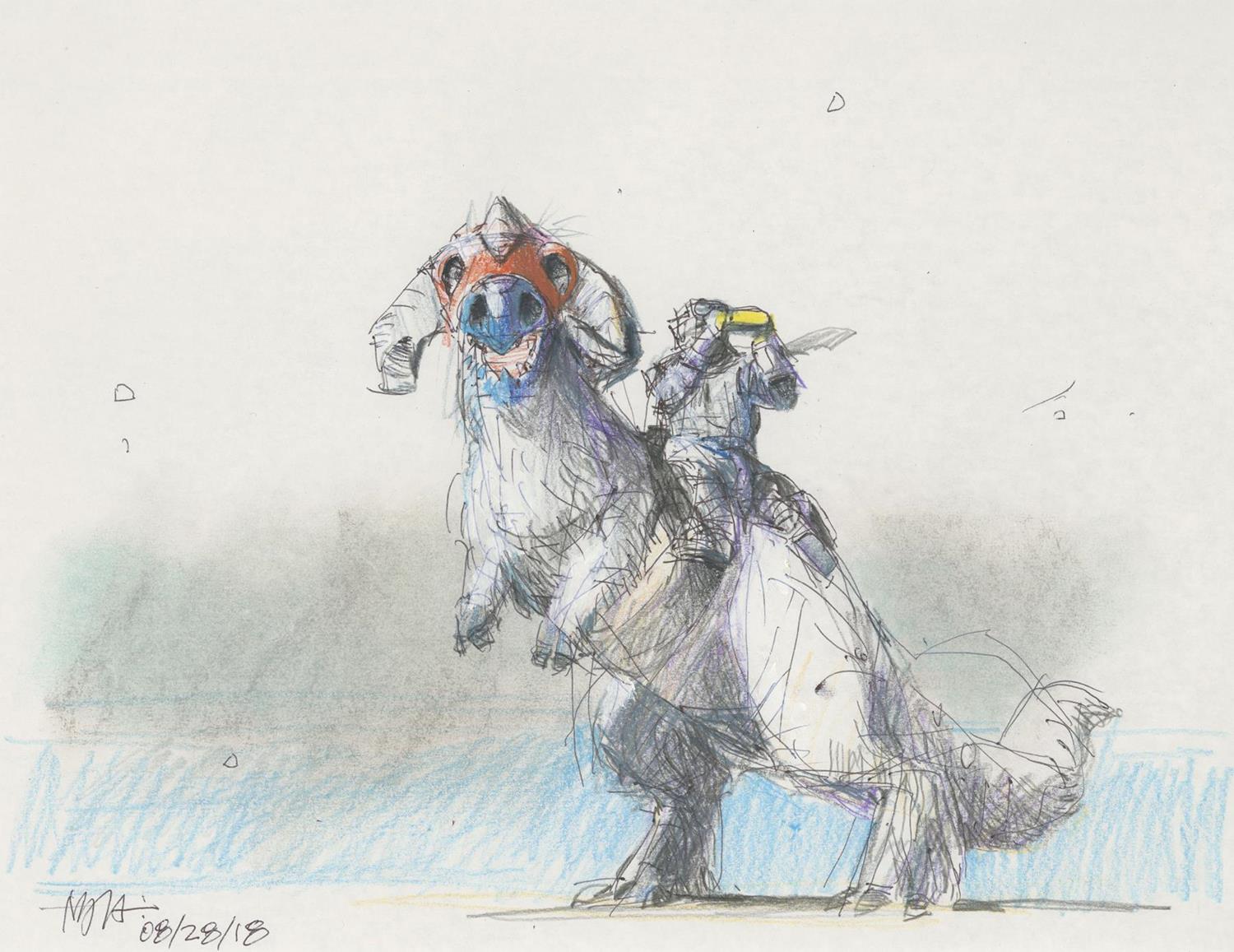 In Part 1 of this two-part interview, we discuss the “Reimagined” Collection of Star Wars sketches.

Tell us about this new collection of Star Wars designs and sketches you created.

NRJ:      The story that I really wanted to tell with this artwork was—what can you do with ballpoint pen, a rough texture paper, and in this case, the second time around, no markers, just pencils. No delete keys. I tried to really copy that era Joe Johnston and I were in at the time. And we didn’t have computers. We didn’t have internet. If you have an idea, you have to chase the idea by picking up a piece of paper. And a white blank piece of paper is so daunting. It sometimes asks me, “Nilo, are you worthy of me?” So, I think the first sketches I did, I basically just tried to remember what these things looked like. I haven’t entered this world since I worked on the films. And then I went on from there. 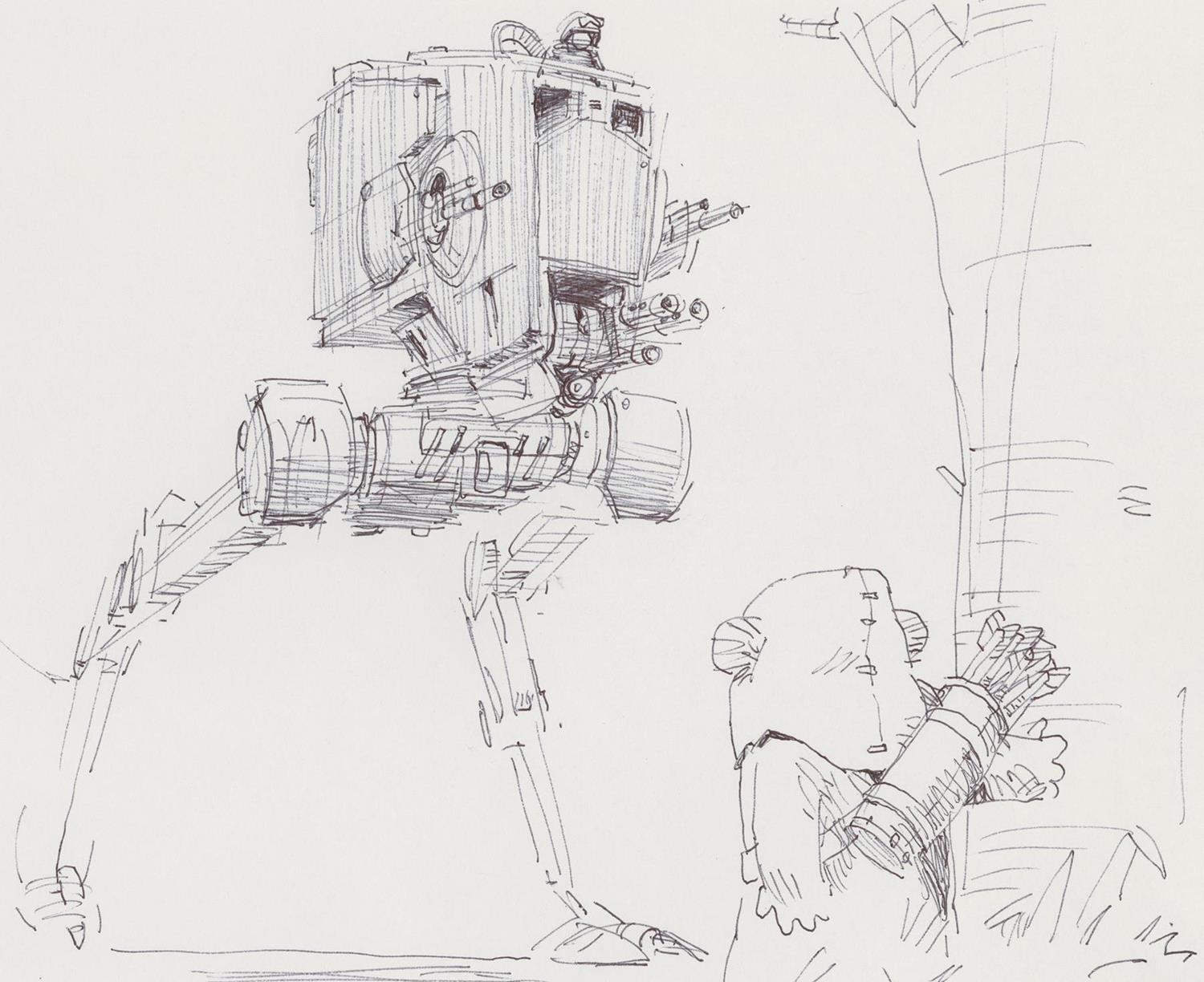 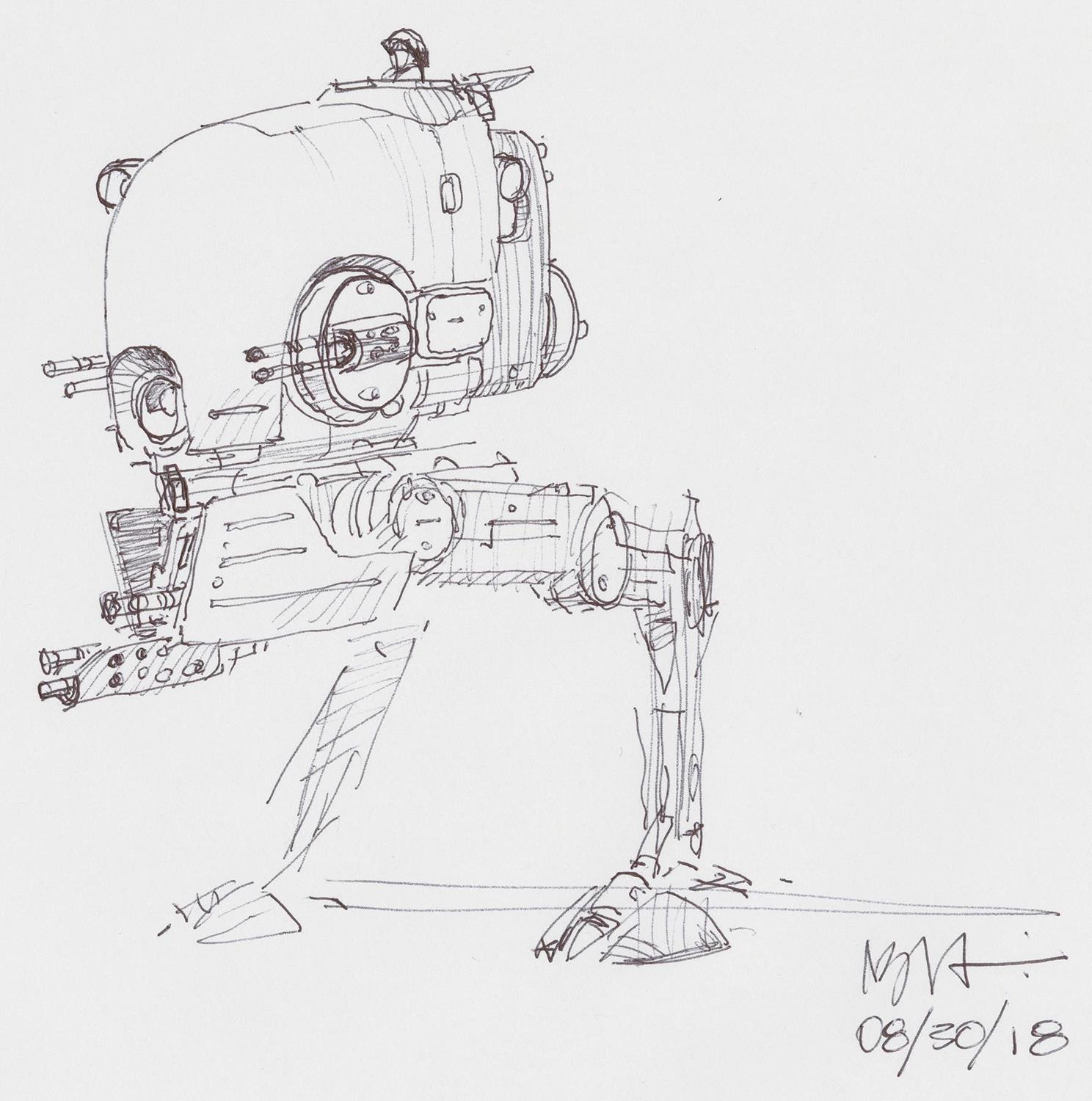 The challenge of revisiting that world was interesting to me, and especially because the past few years of design has been so computer-driven. I was rekindling the idea of, what was I thinking at the time? Oh yeah. It had something to do with Ralph [McQuarrie] establishing this look and I had to follow that. I wanted to see if the new designs I created, which didn’t exist before, would be copasetic with what came before. Would they look like they could exist?

How do you approach creating sketches like these – what materials do you use?

NRJ: When I started working on this, I actually went to art stores and looked at markers. But markers don’t bleed like they used to. Because they are now water based. We have gotten rid of the turpentine based markers. The line between colors when you mix them, is so hard that I can’t blend it anymore. And what we used to do was we would take turpentine and literally smear the markers with our fingers to blend them some more.

We did not work with colored pencils much at the time because they are slow.   Marker is fast, and then markers kind of give you the overall tone. And why did we draw black backgrounds, on the characters that we designed? Well, because there was a lot of smear. We had to block it out again.

I became particular with paper. I started looking around in town for specific paper that has more tooth to it. I didn’t want it to be super white paper. Having tooth pulls the ink out of the ball point. So you really have to think twice, because by the time the ball makes contact with the paper, the ink starts bleeding. I often take a brand new ball point pen, brand new, and I ruin the ball. It makes your line become unpredictable and uneven. In other words, your line has character. It’s not even across the board, and maybe it’s more challenging or maybe it brings more character into your design.

Some of the sketches have a lot of energy to them – there is a lot of line work and it looks like you were searching for the designs.

But you’re still searching for it. And this idea of searching and these haphazard lines—and within the haphazard lines you find what you’re looking for. But mostly you try to compose it in your brain before you put it on paper. 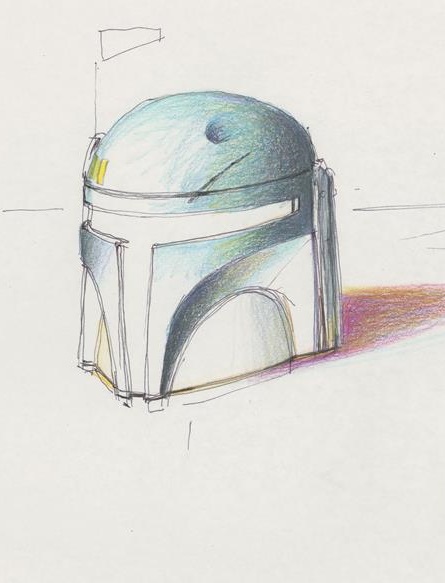 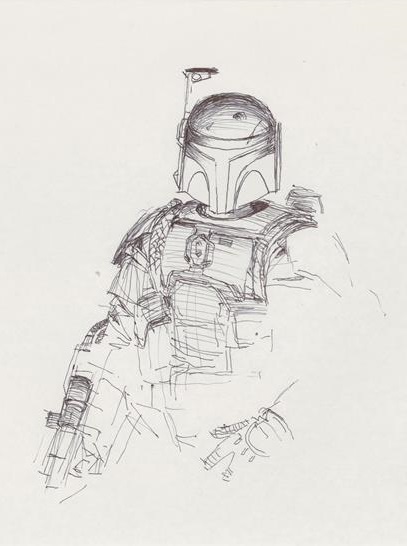 Sometimes my brain says let’s do a clean sketch today. Let’s try and do… And that’s when I really mess up. Because I’m trying to recreate. So the sketch is to tell a story. Ralph [McQuarrie] used to say to me, “you need to have patience.” I always have the same reaction. I just laugh and think someday I’ll find it, Ralph” I really don’t, you know. I feel that if George [Lucas] can read the sketch, I’m done. It’s for George to read, and if he gets excited about it, I’m done. Let me go to the next one.

Can we talk about some of the specific characters – both the original concepts, and the reimagined versions you’ve done here? Let’s start with the Biker Scout.

NRJ: The original one was a very simple concept. I saw a picture of a racing horse. They have the blinders on the horse’s eyes. It doesn’t allow them to look side to side. And I remember thinking that’s a great idea for a biker. They’re designed to look forward. 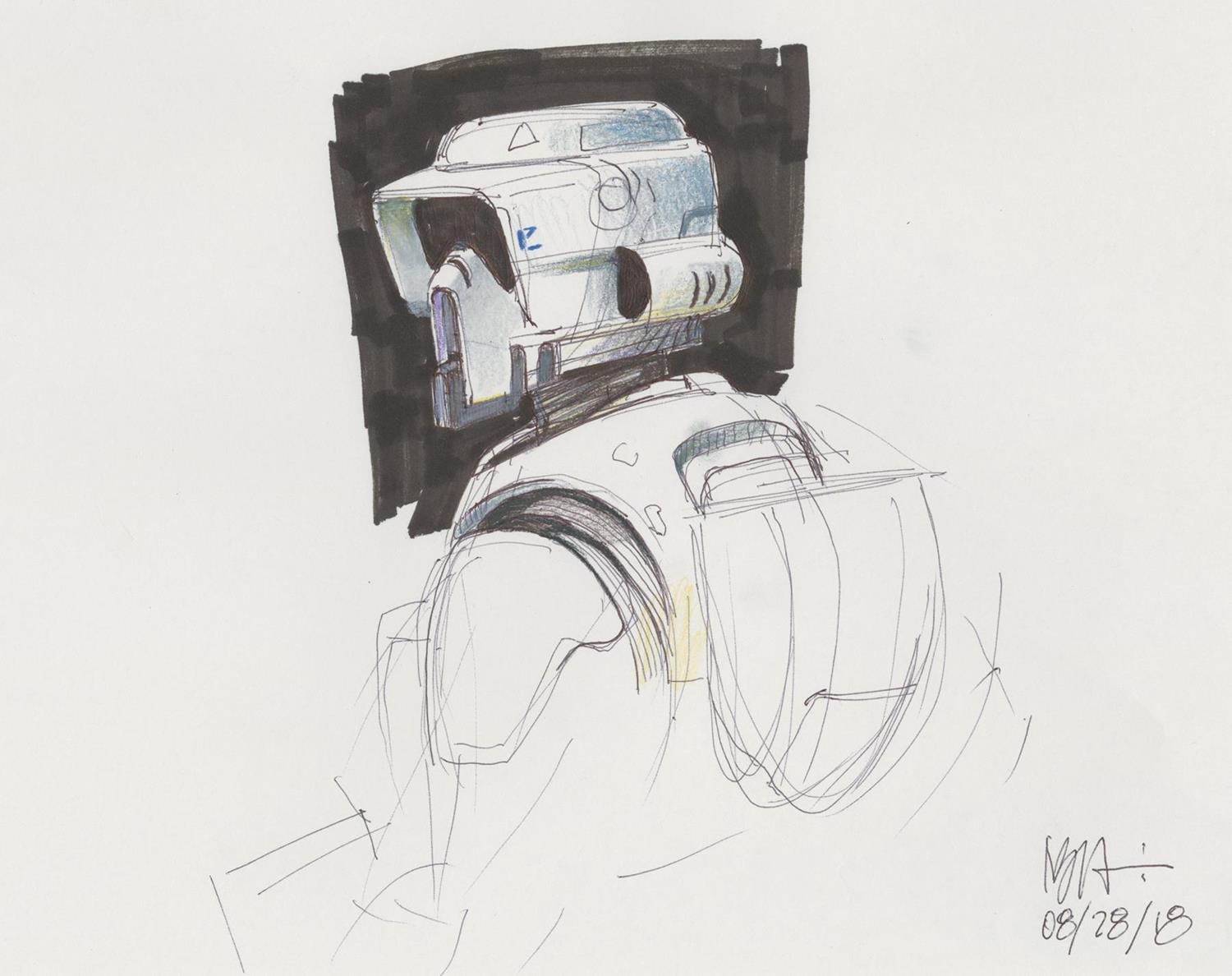 Aerodynamically, it’s a stupid idea. You can’t really turn your head because the wind catches it and it will flip your head sideways. But conceptually, from the movie point of view, I guess it’s a very simple, clear idea. They are only supposed to look forward. That’s it. And to me, that’s a really good design direction.

And when you design a trooper armor like the Biker, are you thinking about what’s underneath?

NRJ: At that time George was very ambivalent and vague. Are they human or not? Because I remember I did a sketch of the biker with the visor up and you see a human being. And George absolutely recoiled in horror. He said, “How did you know that it was human?” And I remember saying, well they are, aren’t they? They have fingers. And he said, “You’ve never seen them before. What’s inside a storm trooper? Are they human?”

So in the recent films, the first time that guy pulled up his helmet, I was shocked and said, Really? They’re all humans? Because that helmet, the way I’ve always thought Ralph designed that helmet is that it’s not human. Or we’re being vague about it. So when I saw there was nothing inside that helmet I thought, Can you tell me that there are mechanics inside? They didn’t just design that shape for the sake of that shape. There’s purpose to that outside shape. But when he pulled it off, and I clearly saw that there was nothing but hollow inside, I go, Was it just a mask to scare me?

Tell us about the Tauntaun.

NRJ: When I tried new sketches of the Tauntaun, at first I could not draw it. I could not remember, what did it look like? And then I realized I remember Phil [Tippett] telling me that all dinosaurs are chickens. At the time he kept telling me, “your proportion is wrong.” And I kept telling him, well how do you know Phil? What’s the clue? He goes, “the chickens.”

I really like the Tauntauns. I can think of lots of Tauntauns, like scaly Tauntauns, four-legged Tauntauns or very tall Tauntauns, you know.

How about the Imperial tanks? 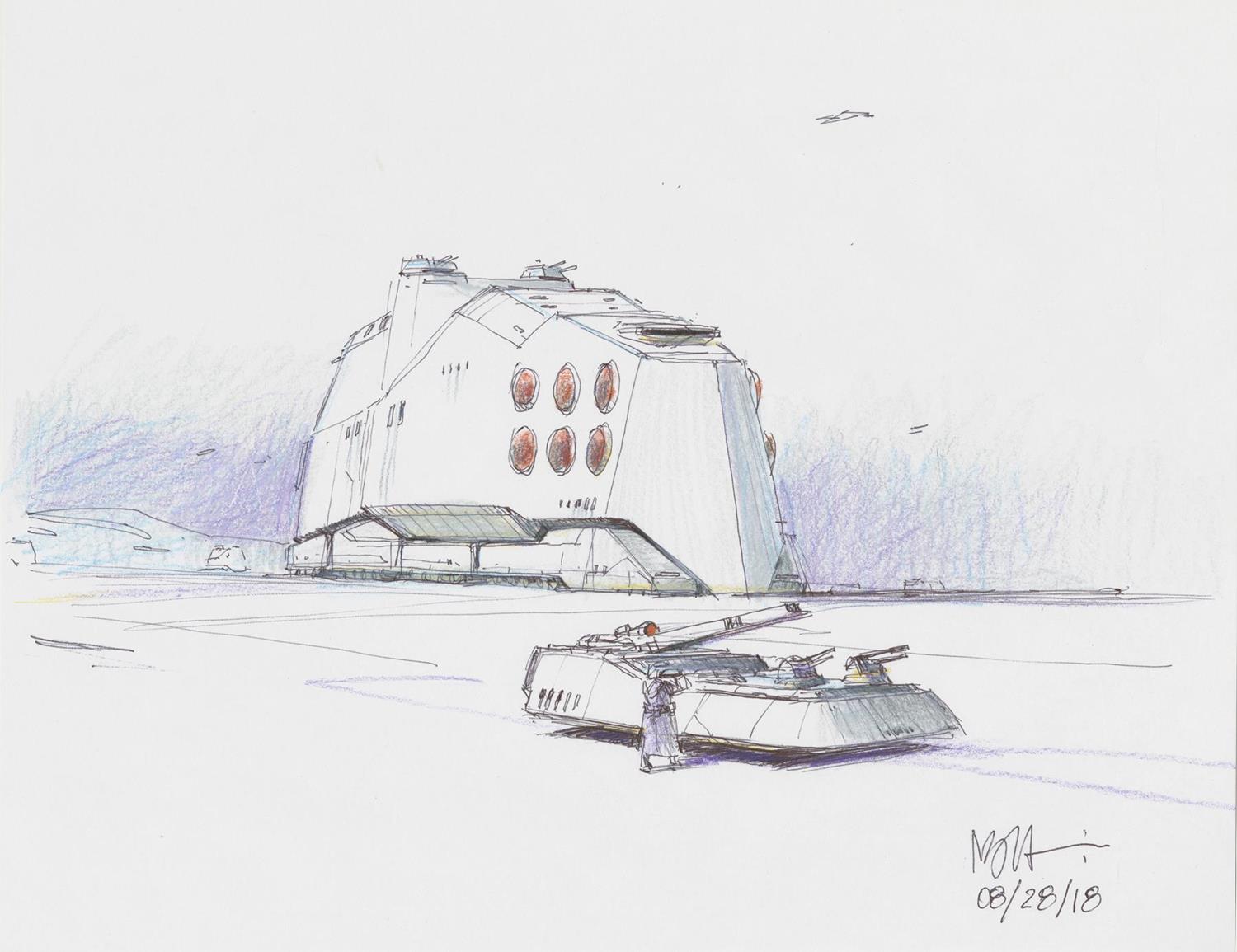 Of course before the walkers, we were considering tanks. So I did some new sketches of tanks, though I am not completely happy with them. There are two principles that I was trying to hold there. Designing tanks for the real world, you want them to be as flat as possible. To be as low to the ground as possible. So I attempted to do some things that were no higher than the treads, you know? And then I thought, just go as high as you can. Who cares? They’re the Imperial people. They’re not hiding.

How about the updated chicken walkers?

NRJ: With the chicken walkers in the film, I really liked the chicken legs, but I wanted it to be less plywood-y. Every time I look at it I go, uh, this is constructed out of plywood.

And the speeder bikes?

NRJ: For the new speeder bike sketches, I liked the idea of flying a gun. I have a plastic model of a pistol, of an automatic here at home. And I looked at that while I was sketching, and I go, what happens if you fly this thing? You know the A-10 airplane? They designed the gun first and then they asked the designers, how do we fly this thing? 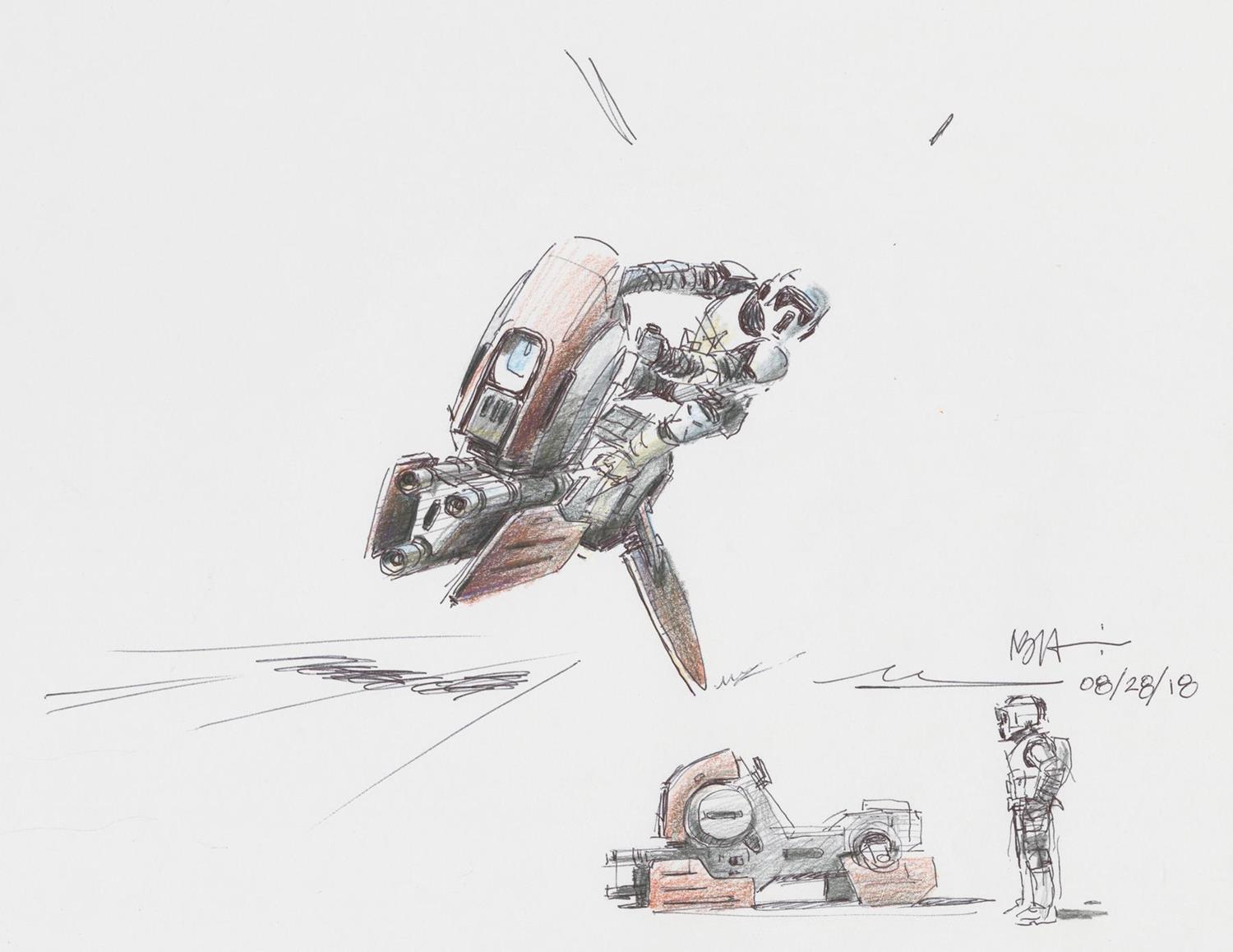 That was the overall design concept of that. So we design a canopy around the gun, and the pilot has to sit on top of the gun, and then everything grew out of that. Would you let the guy sit? No, you let him stand. He’s ready to fight, for a short hop. It’s not like you’re in for miles of run. And what I like about that is the scale of the cannon is so massive. Clearly the only purpose of that is to destroy something big.

At the time, George was vague with us about some of these things. He never really told us what he was looking for. It’s just the inner vision of a chase in the forest. Is it a wheeled vehicle, is it a track vehicle, is flying, is it one man, is it two man, is it six man, is it…..and George doesn’t always know. He evolves and he adjusts his stories accordingly. 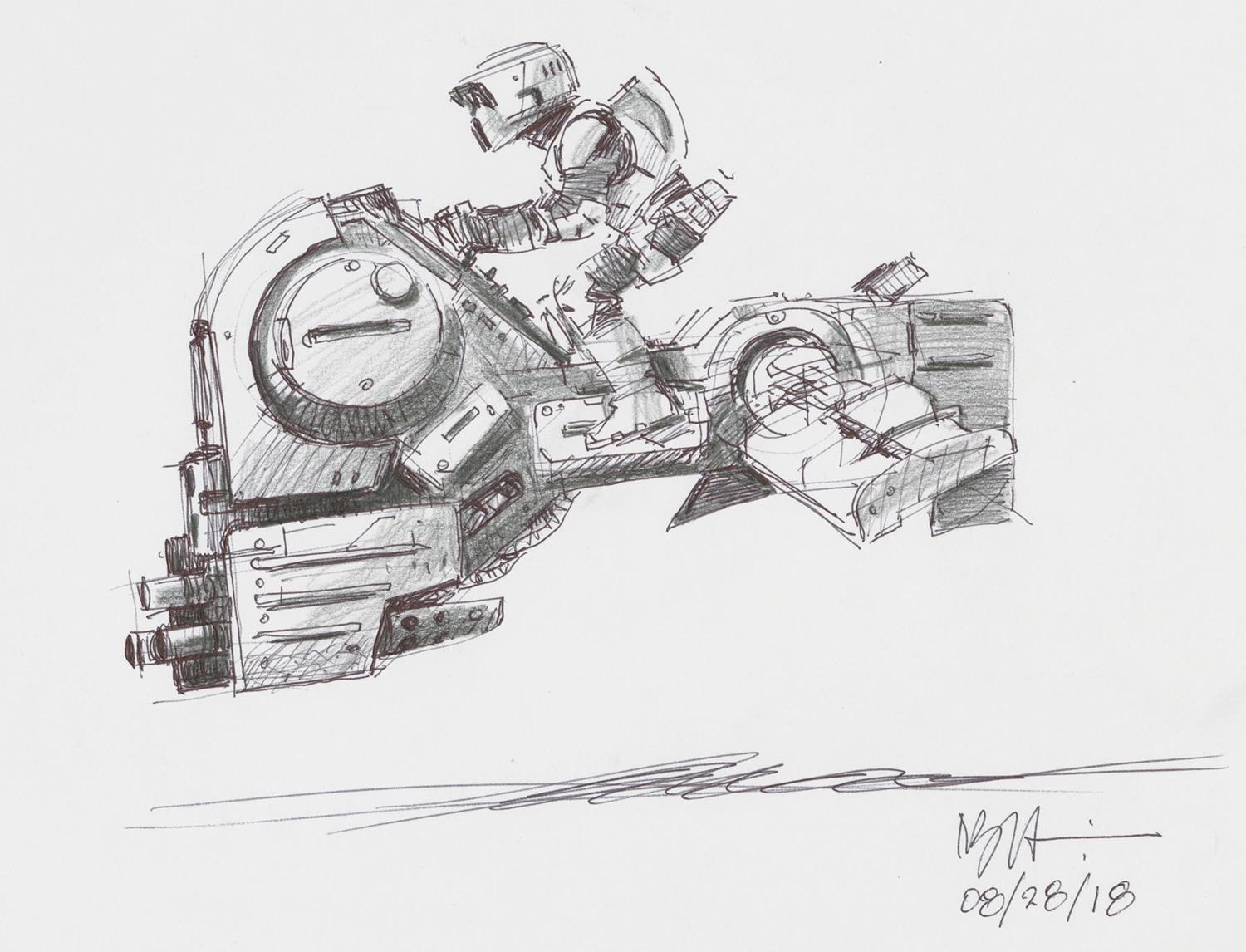 It only was at the end of Return of the Jedi I realized that what he was looking for was a diversion with the speeder chase. We needed some action. But he didn’t explain that. He just said, “there’s a chase going on. I think it’s in the forest.”

Join us for part two of the interview where we discuss all things design: designing versus styling, George Lucas’s design approach, the differences in designers and artists, and more…

Next post
EXECUTIVE SUITS: Highlights from the Vice Auction