While recreating the classic costumes and props for a new generation of Star Trek fans, the films’ designers paid close attention to the now legendary aesthetics of the original series while also giving the new alternate universe a modern flair… 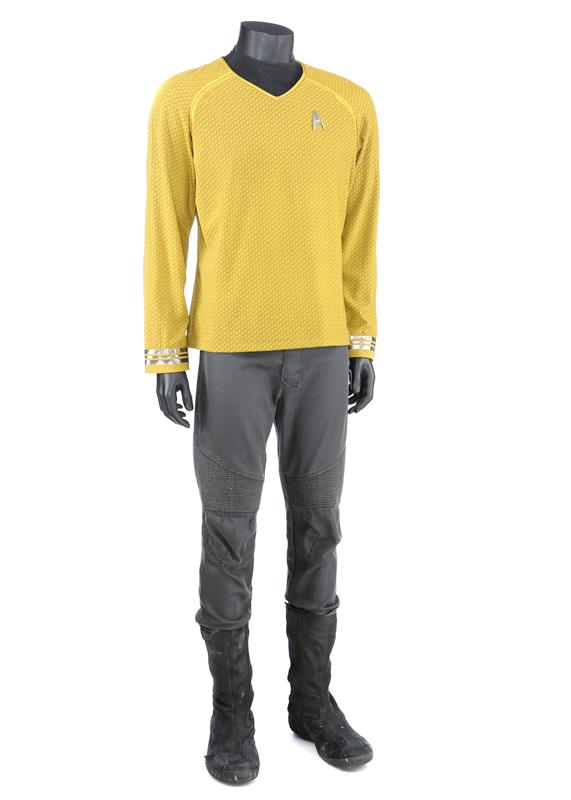 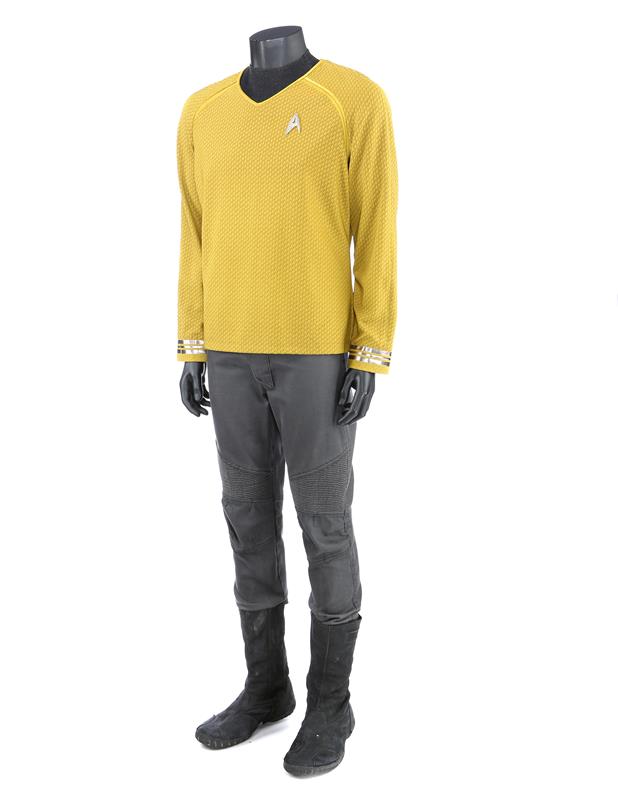 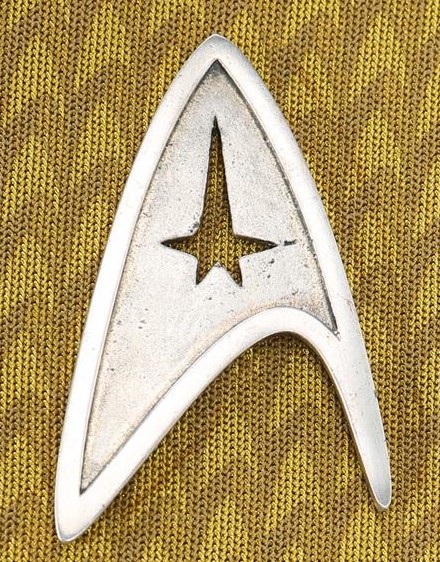 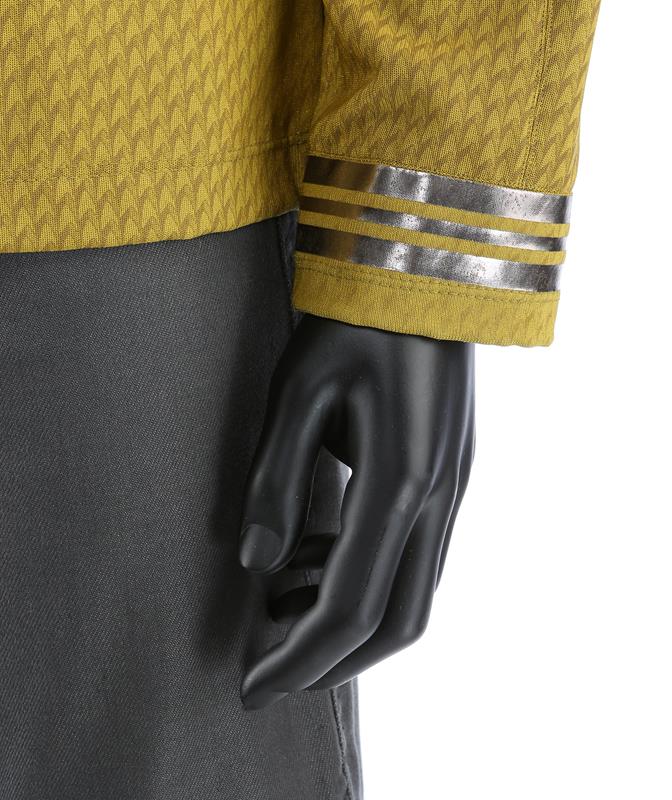 While he is warping through the far reaches space, courting alien beauties, and stopping Khan, Captain James Tiberius Kirk does so in attire inspired by the classic Star Trek. This uniform consists of an undershirt, tunic, pants, and boots.

The tunic is the gold color worn by Starfleet Command and is distinguished as a Captain’s uniform through the use of rank stripes on the sleeve. The shirt is accented with piping and features a repeating pattern of Starfleet insignias throughout, giving the 60s-esque design a subtle touch of modern flair. Each article of clothing is marked internally for “Kirk” and the metal Starfleet badge was made specifically for the production of Into Darkness. Additionally, the diagonal pattern on the pants and a hidden zipper in the shirt along the shoulder differ in detail from costumes made for the first film and further identify these pieces as specific to Into Darkness. 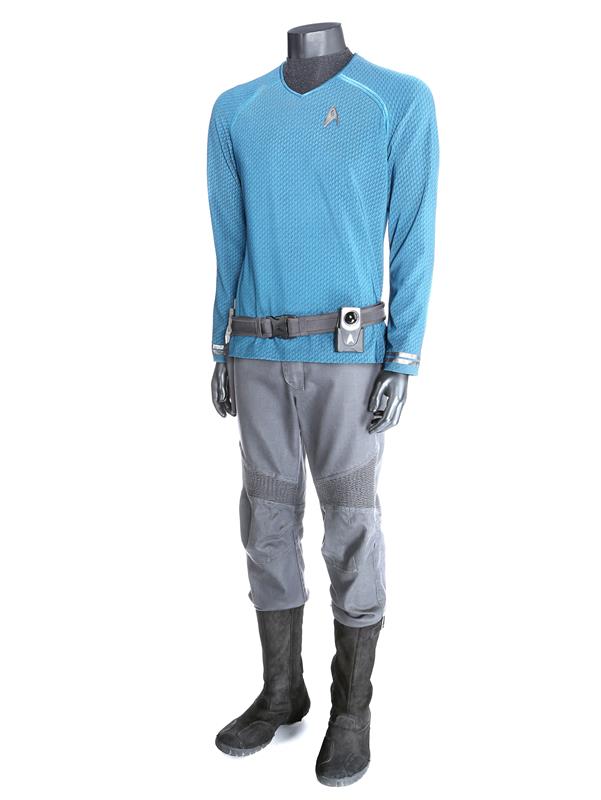 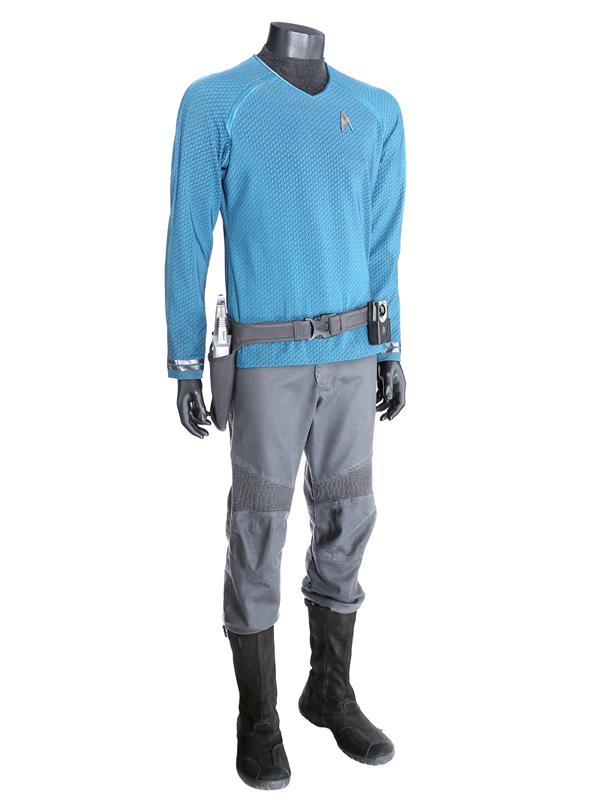 After studying at the prestigious Vulcan Learning Center, Spock became a science officer on the USS Enterprise after he chose to forgo attending the Vulcan Science Academy for a chance to join Starfleet — a decision that shocked the Vulcan community.

This uniform is colored with the deep blue worn by members of the Science Operations division of Starfleet. Notably, the sleeves feature mylar silver rank stripes representing Spock’s position as commander. Just as with Kirk’s uniform, this Science uniform is accented with piping and features a repeating Starfleet pattern to give a modern touch. Made specifically for Into Darkness, the tunic is labeled “Spock” while the undershirt is labeled with the name of a Spock stunt performer. Additionally, the pants, also made for Into Darkness, are labeled internally with “Spock Stunt Harness.”

Famously logical, Spock gives into the human side of his emotions once he believes that Khan has killed his captain and friend, Kirk. Spock chases Khan through San Francisco while donning a holster belt, phaser, and communicator. The phaser resembles the original type 2 phaser from the 1960’s television series with a modern aesthetic.  The phaser incorporates a rotating barrel to differentiate between the “stun” and “kill” settings for the weapon. Similarly, the communicator revisits the design of the iconic original prop while updating it for the modern age. Combined, this lot makes for a perfect bridge between the original Spock and the Vulcan’s counterpart in the new films. 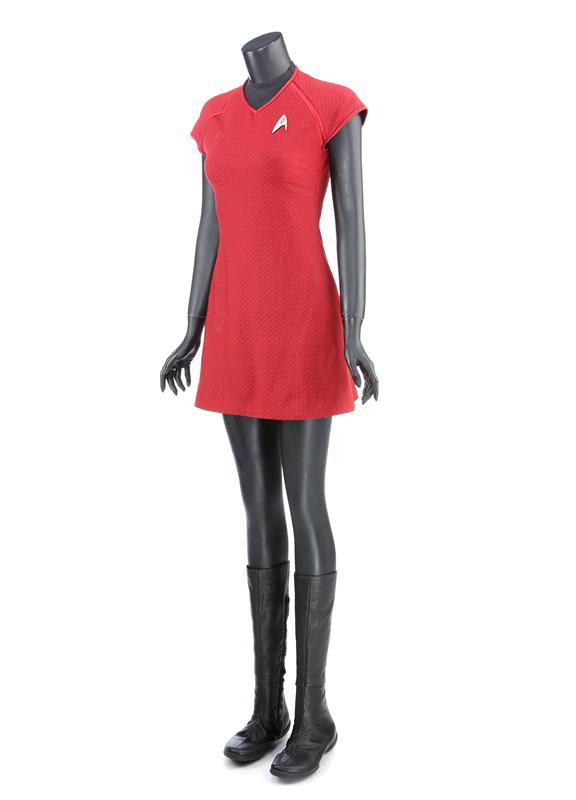 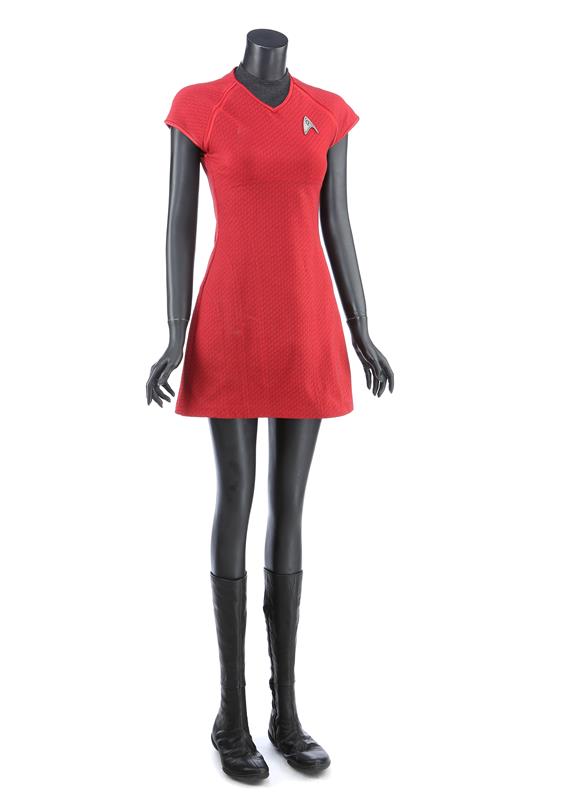 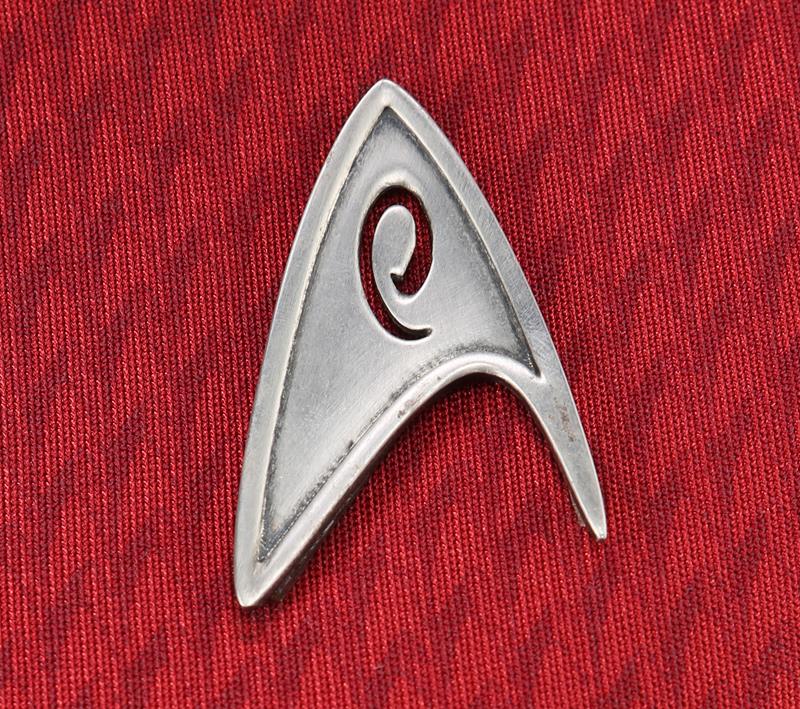 Redesigning a uniform that has become an iconic piece of 1960’s fashion is no easy task. Naturally, the wardrobe team knew that he had to leave the classic miniskirt intact for Star Trek (2009). This uniform features the same repeating optical pattern as the tunics and is colored the deep red of Starfleet’s Operations Division. Notably, the long sleeves from the 1960’s were changed to a sleeveless look for the new films. The dress is identified as being from Into Darkness due to the hidden zipper along the back and the metal Starfleet badge. Internally, the undershirt and dress are each marked for Uhura. A pair of red drop earrings and a set of boots complete the look of this classic costume. 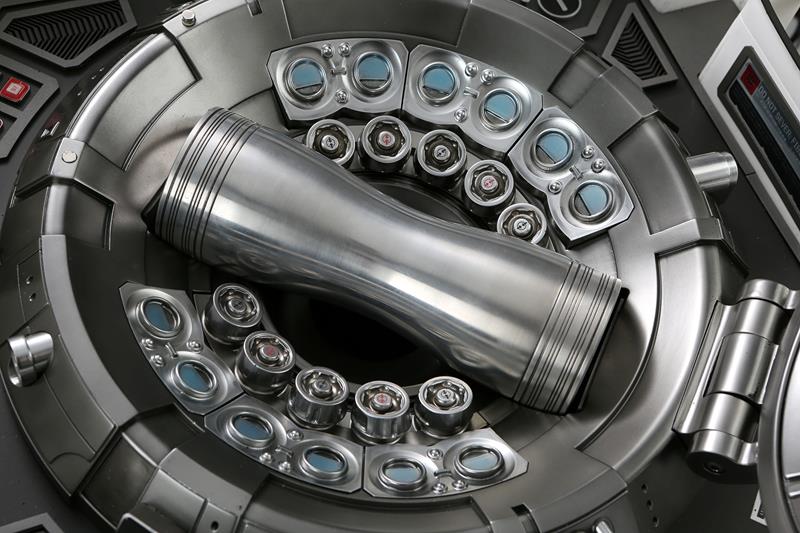 Prime directives are made to be broken. This device, used to halt a volcano from erupting an destroying a primitive culture, is a great example of classic Starfleet design. The outer shell displays a Starfleet insignia accompanied by numbers and other markings reminiscent of designs throughout Star Trek’s 50 year history. Numerous faux metal pieces detail the interior of the prop, including removable cubes and a large aluminum cylinder at the center. A small real-world touch screen device is also housed inside the case. A custom application is loaded on the device which displays a futuristic countdown sequence when opened. With decades of history, Star Trek is known for its numerous devices. As Spock uses his trusty tricorder to activate this cold fusion device, audiences are given a combination of old and new that aligns with a science fiction legacy.