Beijing-based director Zhang Yimou has long been considered a visual genius. Whether intimate dramas like 1987’s Red Sorghum and 1991’s Raise the Red Lantern, or spectacular wuxia epics like 2002’s Hero and 2004’s House of Flying Daggers, Zhang’s films are guaranteed to impress with their exquisite production and costume design, and in particular their meticulous and effective use of colour.

So while it was surprising in 2016 to find Zhang making The Great Wall – a $150 million, Hollywood co-produced blockbuster starring Matt Damon – anyone aware of his work could at least be reassured that it would look like no other blockbuster out there.

What makes The Great Wall so distinct is not the bizarre, lizard-like monsters it hurls at the titular structure, nor the reimagination of The Wall itself as a kind of giant, 12th century Swiss army knife of creature-killing contraptions. It was an element for which Zhang himself was responsible: the division of The Wall’s protective force, The Nameless Order, into five distinct, specialised corps – each instantly recognisable by the colour of its uniform.

With Rubeo’s craftsmanship so in evidence in our upcoming Great Wall auction, we’ve taken a closer look at each of The Nameless Order’s five elite fighting units…

This blue-clad, entirely female corps is both crucial to the plot – being the force which the heroic Lin Mae (Jing Tian) leads – and the most striking. Armed with long spears, its warriors dive gracefully down from the ramparts on bungee cords, trailing long swathes of fabric as they stab at the monsters below. 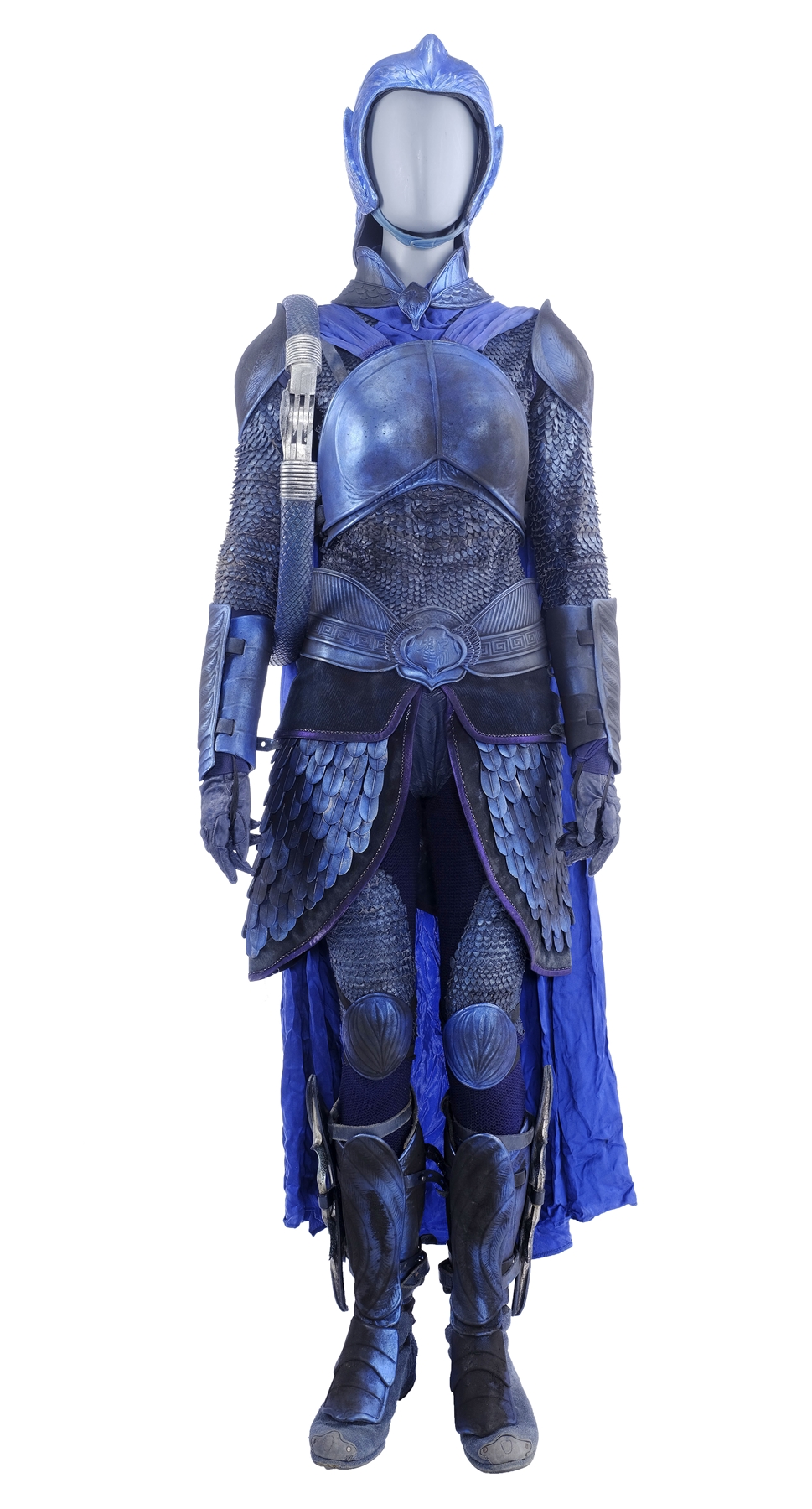 “They practically attack airborne,” Rubeo told Screen Rant. “The blue is because when you look up form below and you see all those pillowy fabrics, you think it’s the sky.”

Clad in red and wielding crossbows, the Eagle Corps is the “mid-range troop,” according to producer Peter Loehr, and the corps that mercenary-turned-hero William Garin (Damon) joins, as a sharpshooting archer. 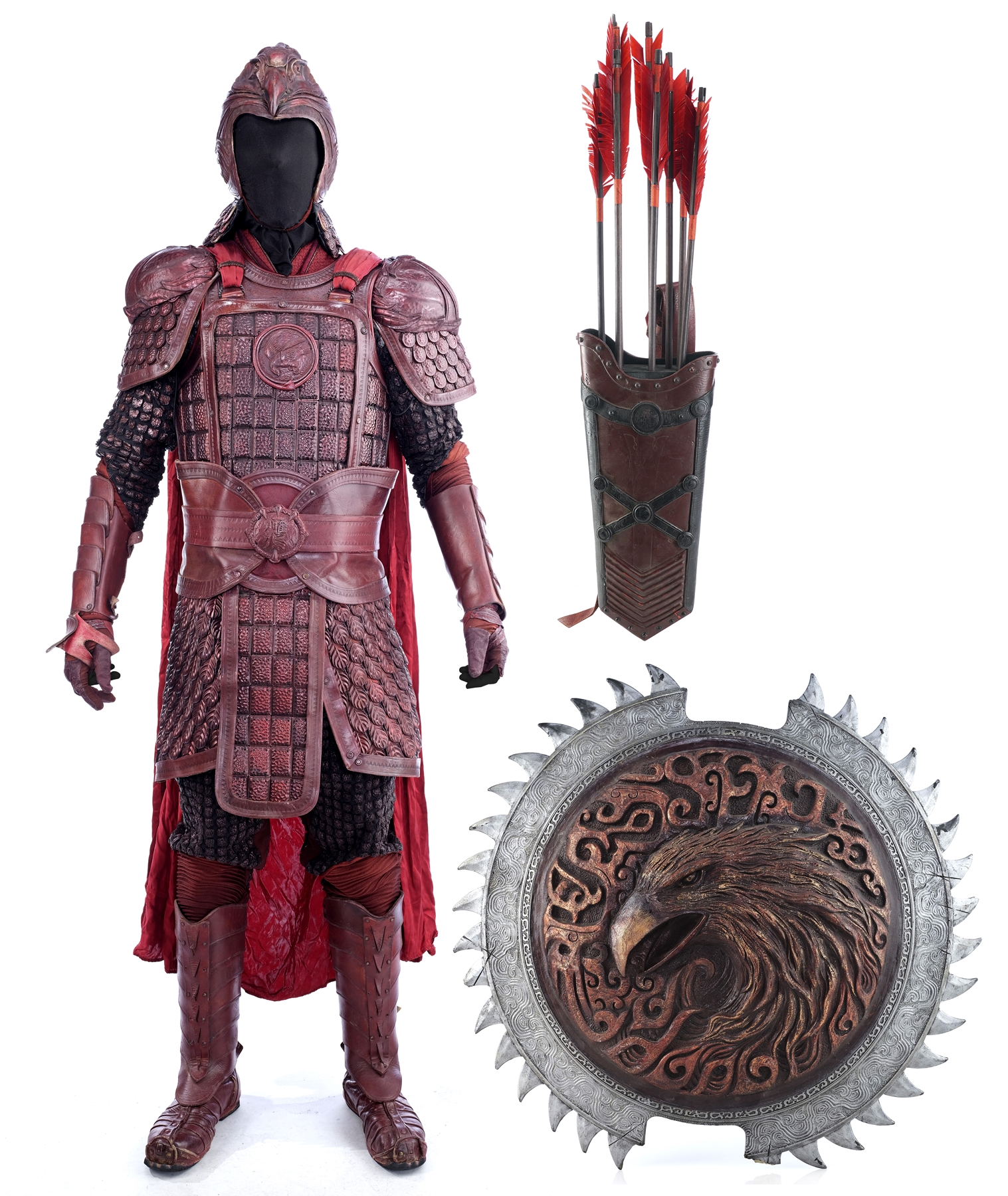 According to Rubeo, these marksmen wear red because it’s Zhang’s favourite colour (as the titles of his earlier films suggest) and it was “the regiment that we were perhaps going to see on the screen the most.”

The engineers who work The Wall’s heavy artillery, such as its fireball-hurling trebuchets, are decked in impressive gold armour. “If our wall was an aircraft carrier,” says Loehr, “they would be the guys down below, manning the engines.” 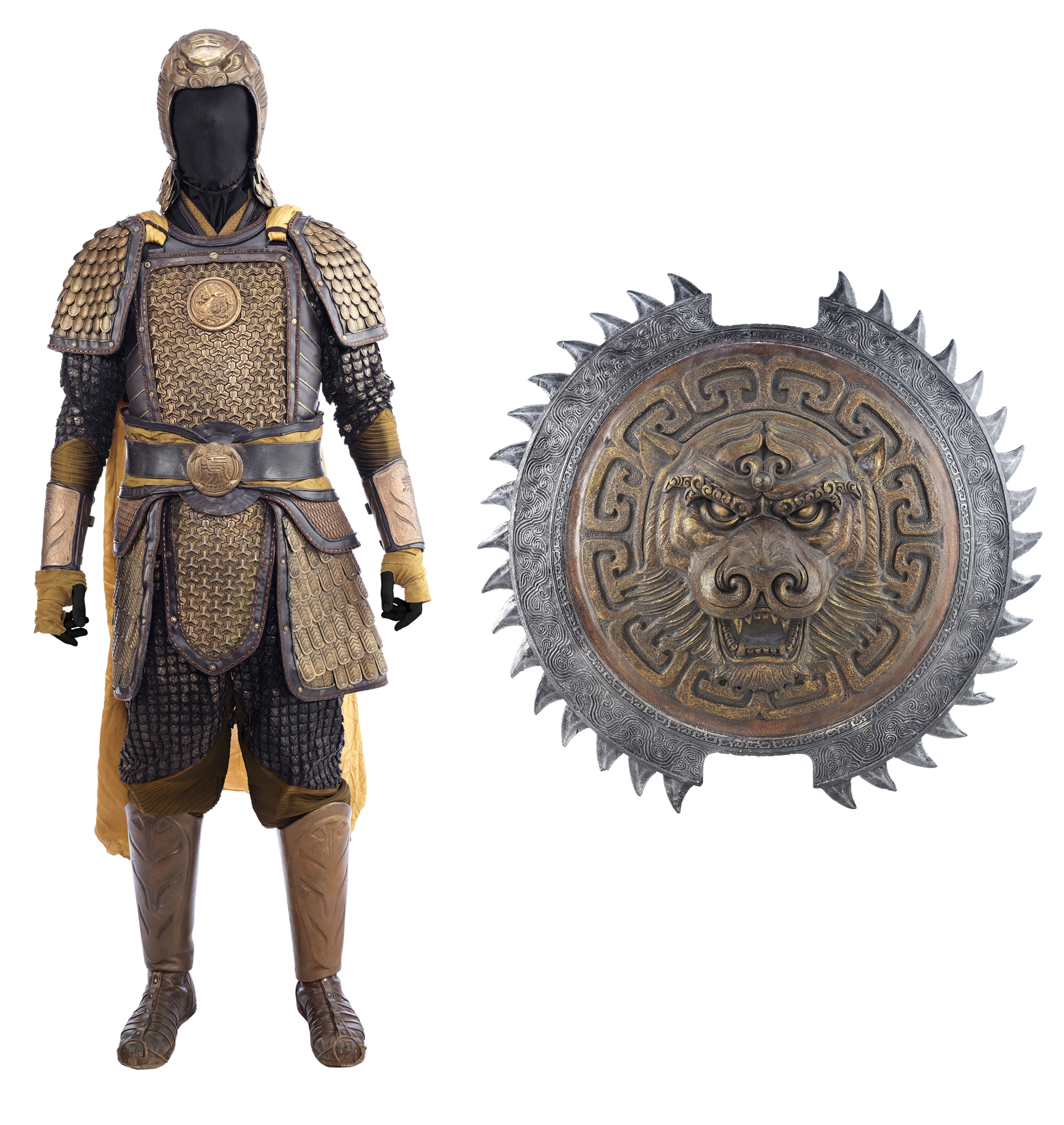 One of Rubeo’s favourite designs was the tiger’s-head helmet for the corps’ commander, which reveals the wearer’s face through an open, snarling mouth. For inspiration, she looked far beyond the borders of China (where she spent 12 months working on this movie). “This is a helmet design that you often see in many armored civilizations of the world, from the Aztec civilization, to Hercules or Alexander the Great’s army.”

The leader of the Nameless Order, General Shao (Zhang Hanyu), is a member of this black-armored unit: the fierce melee fighters who must face the monsters close-up and suffer the highest casualties. 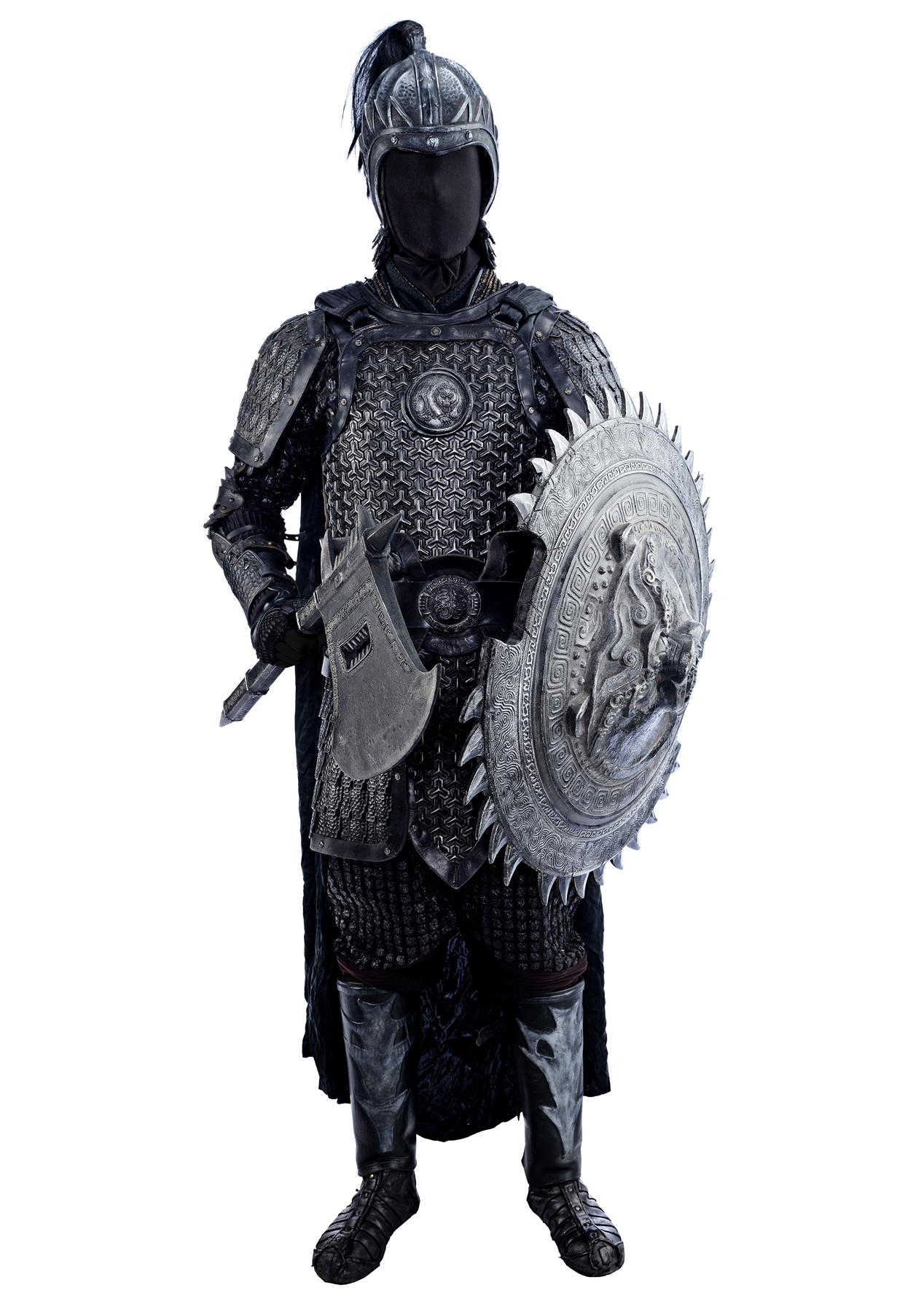 “We dressed the Bear Corps in black because we wanted the costume to reflect the animal itself,” explains Rubeo, who looked at traditional Chinese armor designs for these warriors, “from metal scales to a mountain pattern, which is characteristic of chain mail from China at those times.”

Being the Nameless Order’s cavalry, Loehr describes the Deer Corps as “the last line of defense once The Wall has been breached.” They also employ huge nets to trap the attacking creatures, rushing in to kill them while they are entangled. 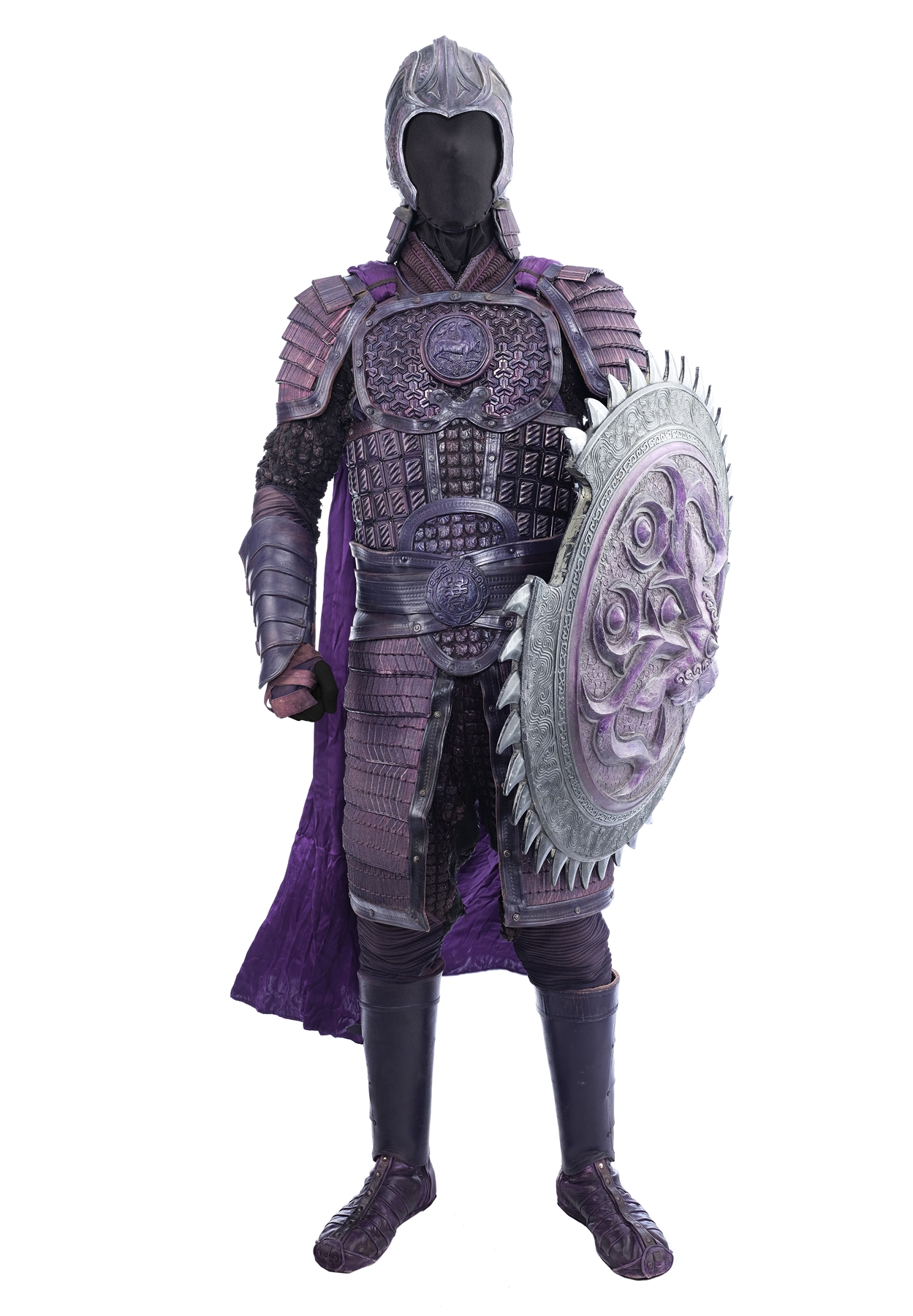 Dressed in purple, Rubeo intended for this regiment to have “a menacing look so the enemy would be scared off,” noting the nasty-looking horns on the Deer commander’s head.

Bid now in the The Great Wall Auction: Second Siege on exclusive auction of weapons, armor, props, and more from the production of The Great Wall. (Bidding ends July 30th 2021)

Next post
How To Bid | MythBusters Online Charity Auction