The U.K. team also took on the challenge of translating the two-dimensional concept artwork to three-dimensions sets, costumes, and props. An army of in-house carpenters, plasterers, riggers and painters worked to create the sets, but many of the key props and set pieces were contracted out to external vendors. R2-D2 , Luke’s Landspeeder, and the X-wing and Y-wing props are all examples of items created outside of the studio for the film. Two lesser-known examples of this farmed out work are the Dewback and Djerba creatures seen on Tatooine. 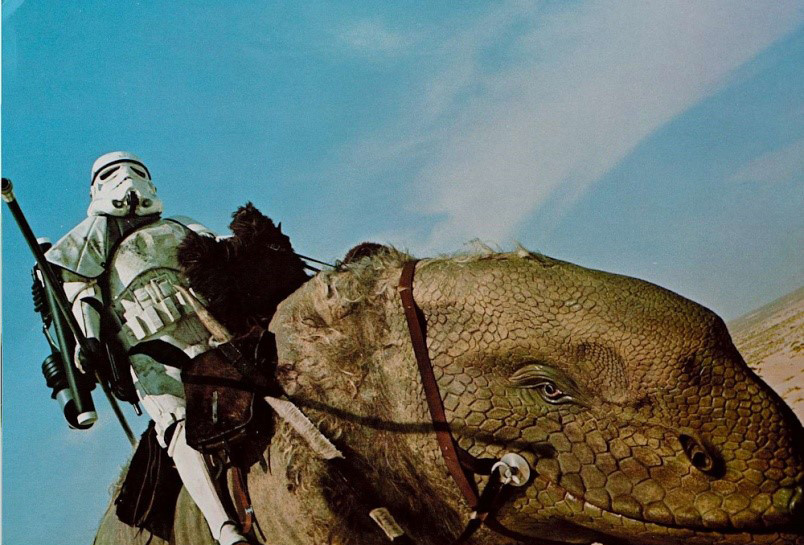 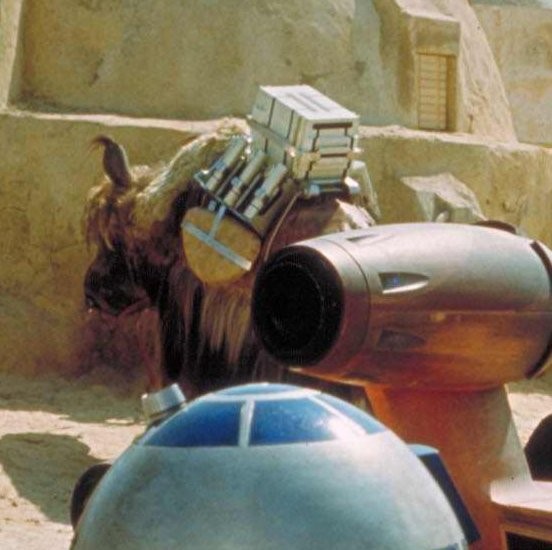 The various drafts of the Star Wars script call these creatures out in a single line: The speeder pulls up in front of a rundown blockhouse cantina on the outskirts of the spaceport. Various strange forms of transport, including several unusual beasts of burden are parked outside the bar. 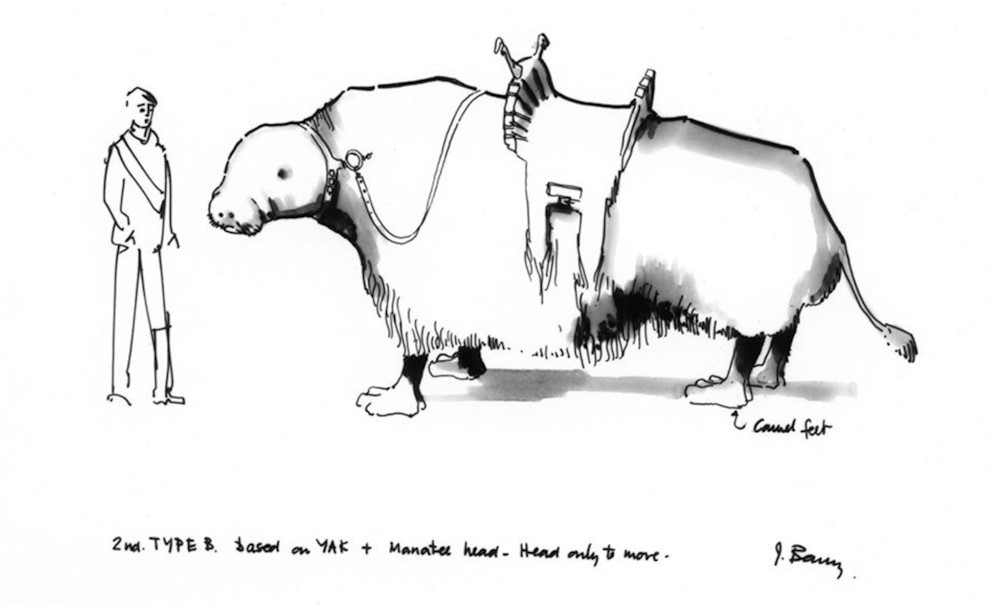 The four-legged beast that would later be known as the “Jerba” began life as a John Barry sketch. He described the creature as based on a Yak (a long-haired animal), with a manatee head. The inspiration for the Dewback creature was actually a 1975 painting by concept artist Ron Cobb that was owned by Lucas’ friend John Milius, featuring a rider atop of a lizard. 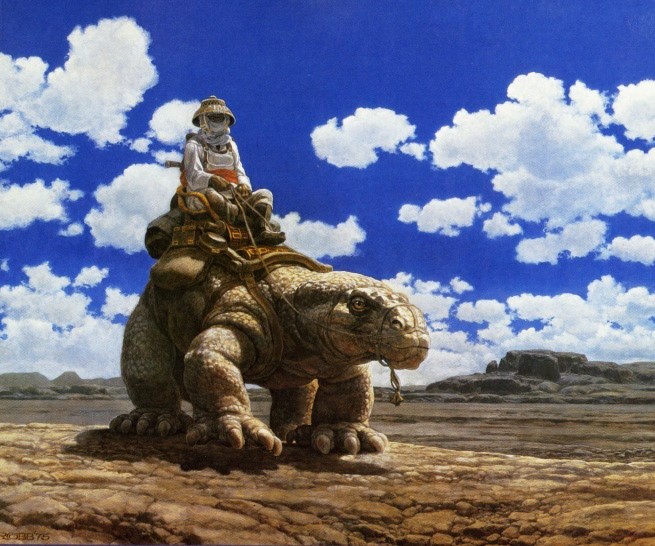 Art Models Ltd. was a specialist art-fabrication company owned and managed by Fred Pearl, located in Wimbledon, about 20 miles from the studio at Elstree. They had previously done work for the industry including speciality costumes for Space: 1999. Fred Pearl and his small team (which included his daughters) were hired to build full-size, practical set pieces of both the Jerba (named for the small island in Tunisia where the Mos Eisley scenes were filmed and the creature appeared) and the Dewback. Two Jerba creatures were built, and one Dewback. 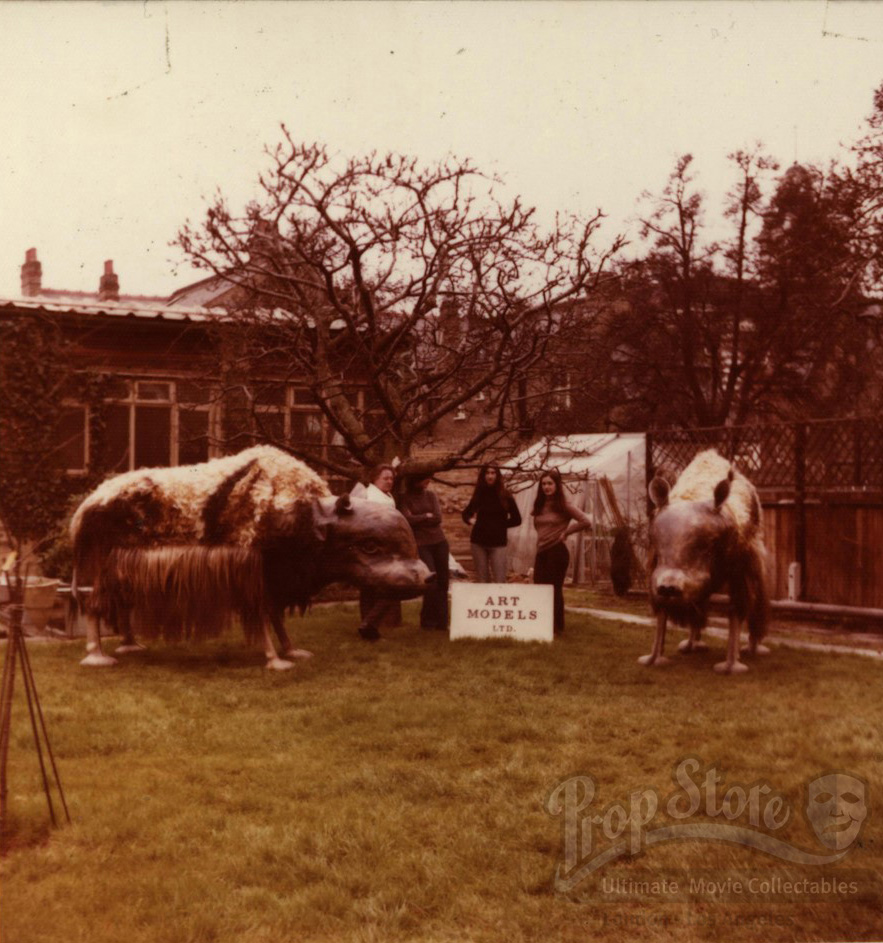 The Jerba creatures appear in the film (as per the script) outside of the Mos Eisley Cantina. They are static background pieces, being used to transport equipment. The Dewback was used outside of the Cantina and in the infamous ‘Look Sir, Droids’ scene. It is perhaps best remembered as a main feature in one of the key publicity photos used to promote the original film. 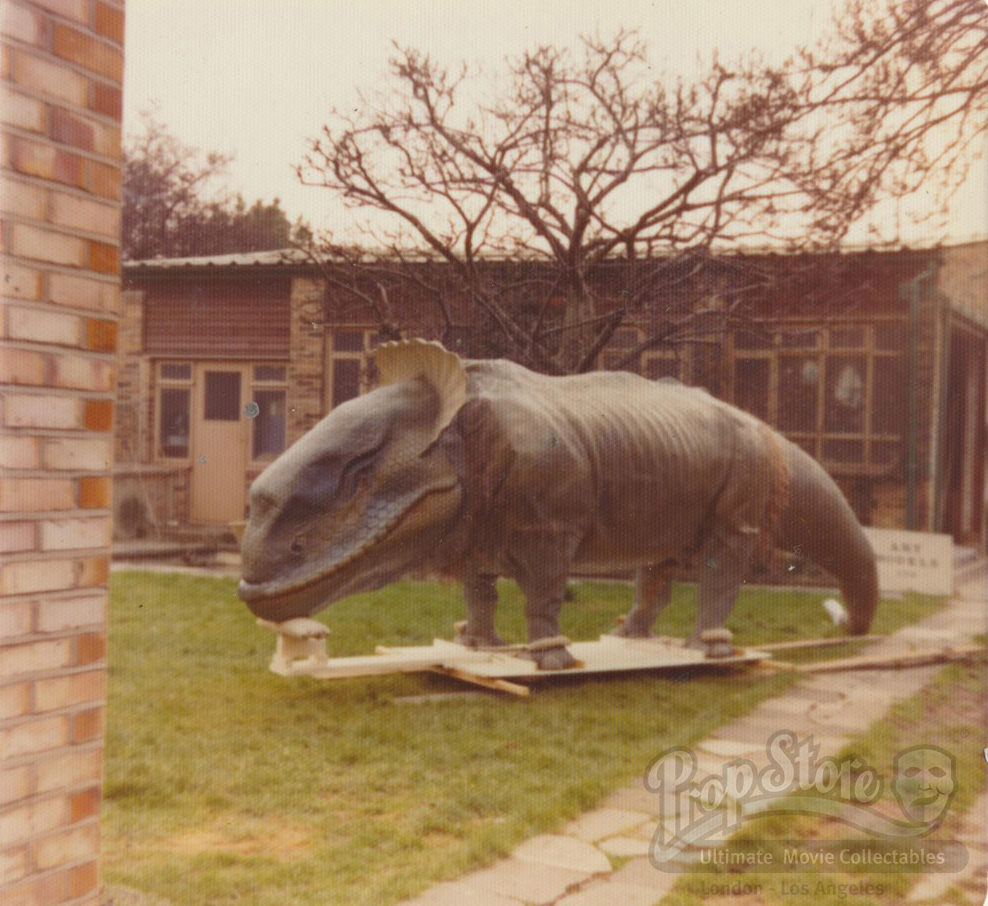 Dewback at Art Models. The neck cowl would later be removed.

Each creature was made from a variety of materials including fibreglass with latex skins, and built to support the weight of a rider. John Barry’s sketch called out a practical head for the Jerba that could move side by side, though it’s not clear if this functionality was incorporated.
Beyond the beasts of burden, Pearl and Art Models seem to have been involved in a small way with the C-3PO costume, as at one time Pearl had original sketches relating to the costume and a casting of a shin piece. A purchase order also exists showing Stuart Freeborn and the creature department ordered two “heads modified with plasticine” from Art Models, though it’s not clear whether these were actual masks or just tools Freeborn was using to create masks. 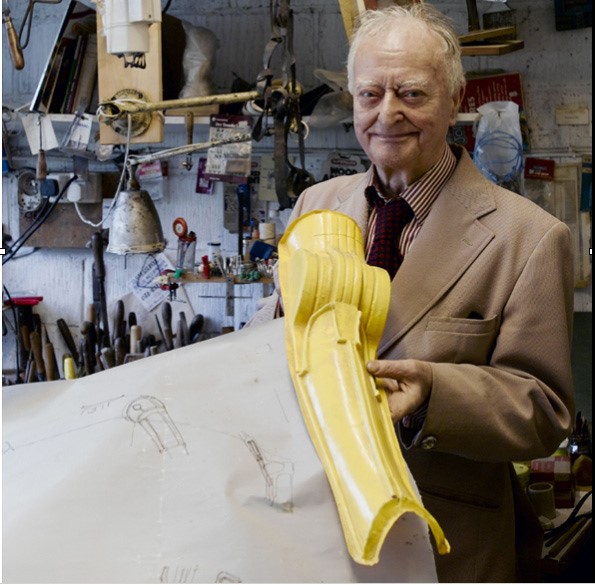 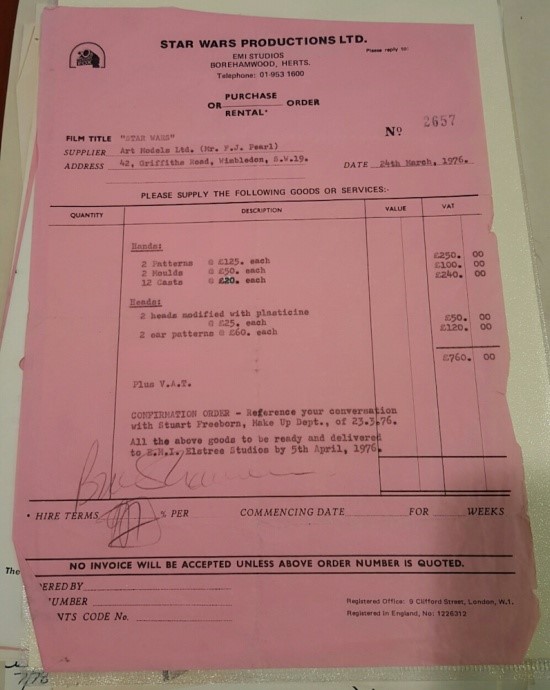 Creature department P.O. from Fred Pearl, and Pearl with C-3PO artifacts circa 2005

The original Dewback prop was destroyed after filming. The Lucas Museum collection holds one of the Jerba creature heads today, but no bodies. At the time he built the creatures for the film, Fred Pearl created an additional back-up casting of the Dewback head in case production called for it. It is not clear if creating a second Dewback prop was considered at some point, or it was simply a back-up in case the original sustained damage. What is clear is that it is the last original Dewback head in existence. 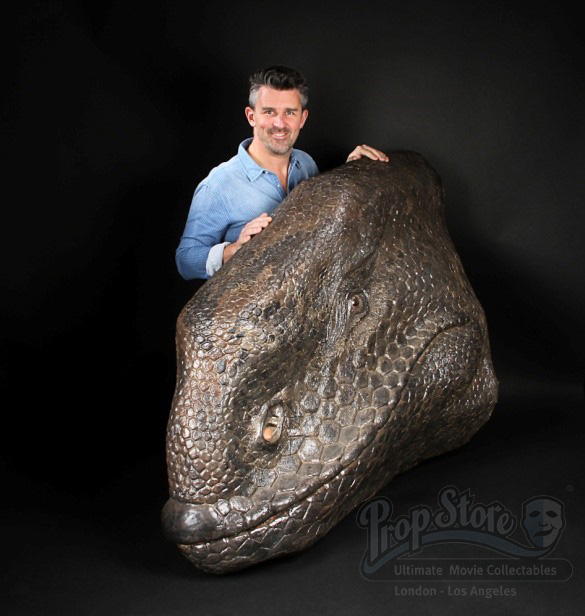 Fred Pearl offered the Dewback head for sale through public auction in 2005, but it failed to meet the reserve price. Prop Store CEO Stephen Lane had met Pearl previously and stayed in touch with him after the auction, at which time Fred felt he would hold on to the head. Stephen stayed in contact with him and ten years later, at the ripe old age of 94, Fred Pearl decided it was time for the Dewback to go to a new home—Prop Store.

In addition to the Dewback head casting, Fred and his family had a photo album showing the construction of the Jerba and Dewback creatures. These never-seen gems are being shared publicly here for the very first time. They offer additional insight into the beloved-Dewback and the overlooked-Jerba, creatures that have rarely been seen in behind-the-scenes images previously. 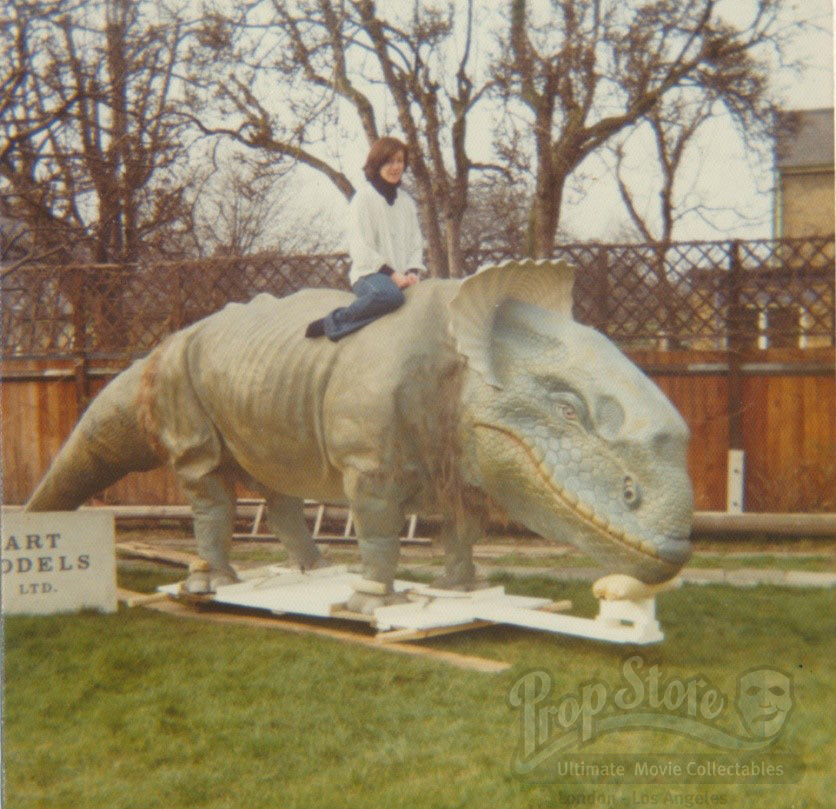 The completed Dewback is demonstrated by Fred Pearl’s daughter 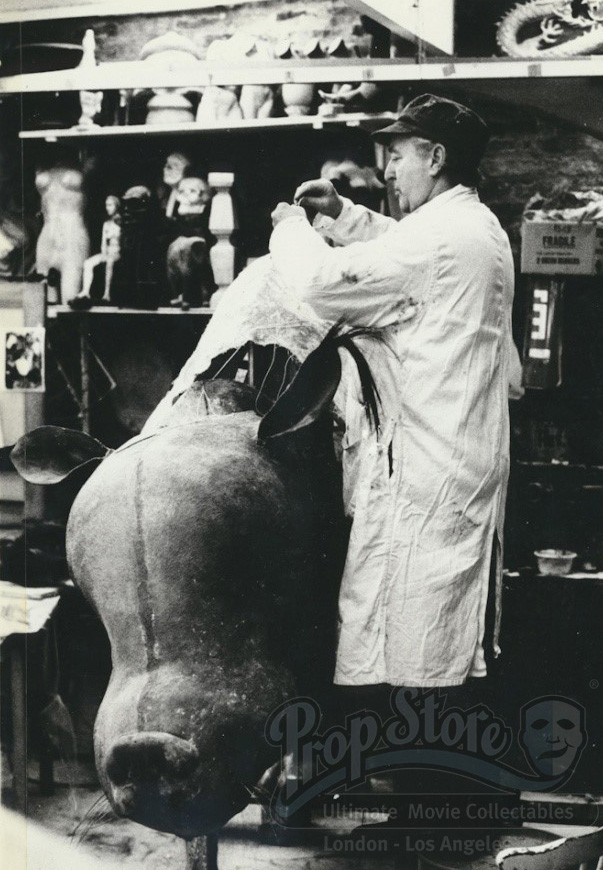 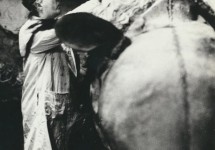 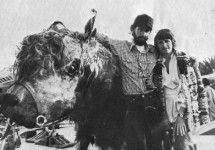 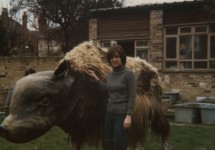 Additional shots of the Jerba at Art Models, and in Tunisia with George and Marcia Lucas 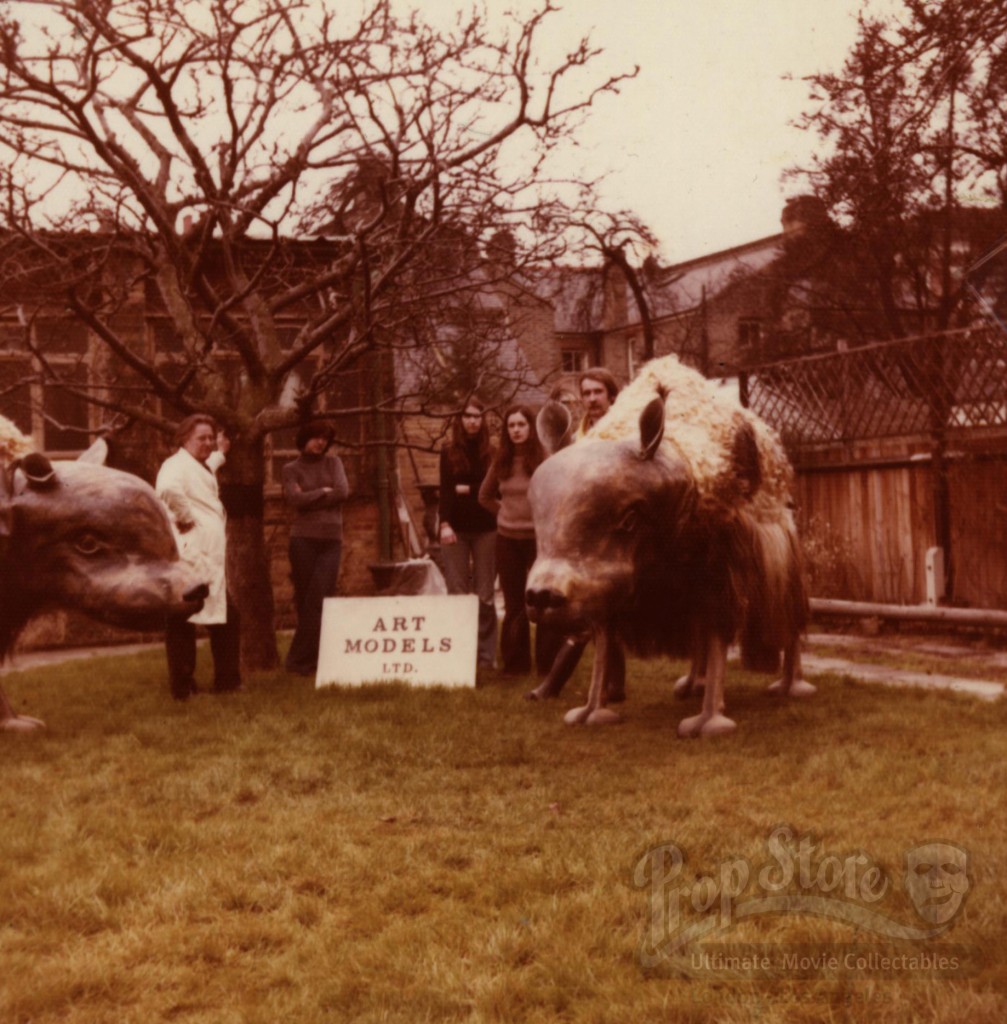 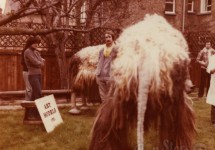 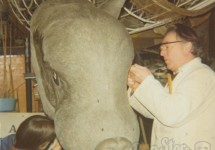 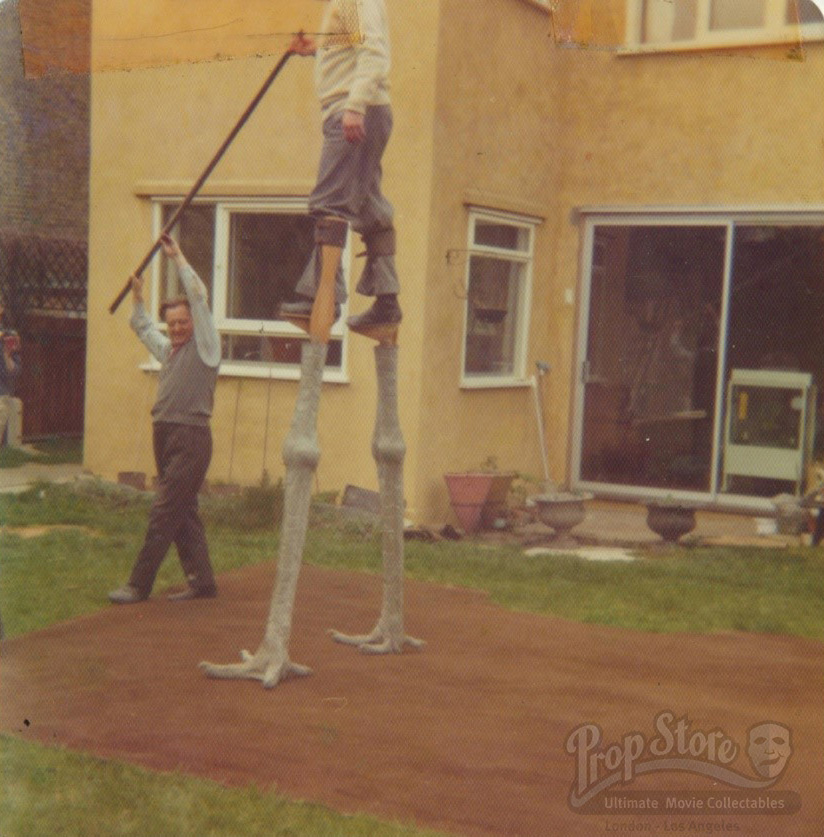 These stilts may relate to the “stilt man” gag filmed in the Mos Eisley alleyways which was cut from Star Wars but appeared in the Holiday Special, or they may be related to another project. The feet here look different to the feet seen in the Mos Eisley shot. 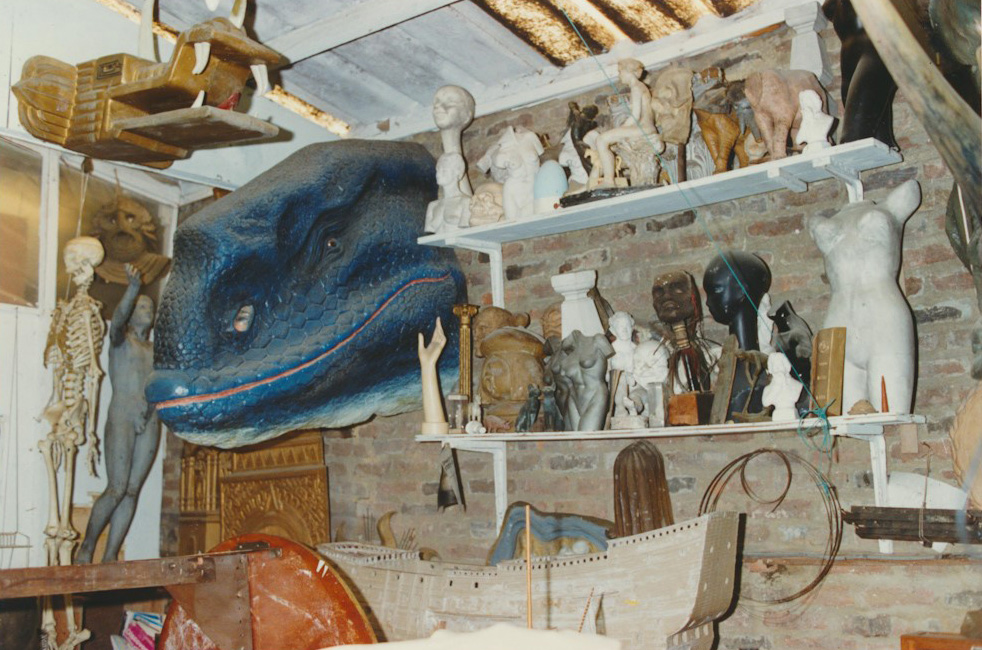 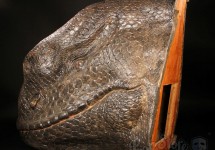 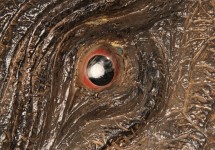 At some point during its life the Dewback head was painted blue—it was later re-painted by Pearl to more closely match the original. 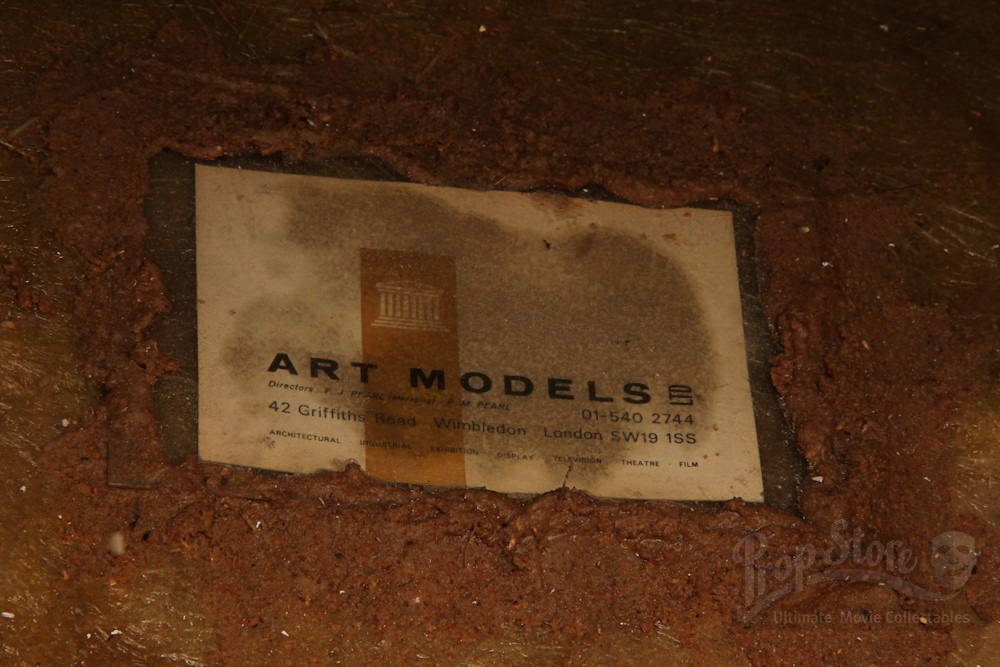 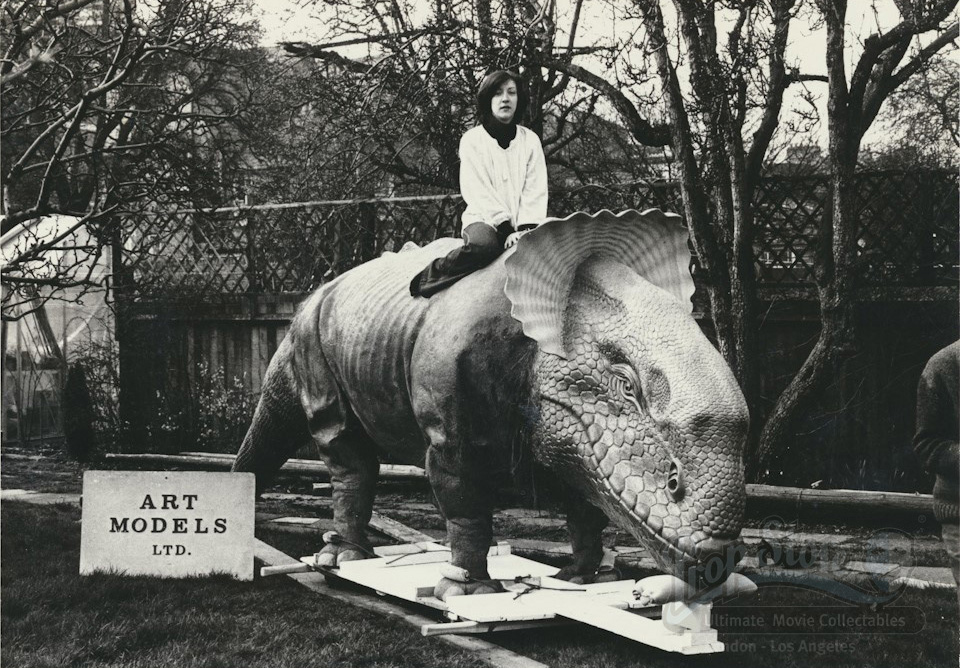 Thank you for reading, and be sure to check out the great range of Star Wars items we have listed on our website!

Leave a Reply to car insurance for cheap Cancel reply